After Tokyo orientation – I thought I’d be orientationed out. Even though I was looking forward to seeing some buddies from Tokyo, I was not looking forward to sitting for nearly 8 hours straight and just listening to people for 3 days straight. Turned out to be not nearly as mundane as Tokyo and way more applicable because it was just JET ALTs (Japan Exchange and Teaching program Assistant Language Teachers) living in Gunma. There are over 30 JETs in our prefecture (like a state) and many more ALT’s. Last week we had an English seminar where we met several more ALTs that are not part of the JET Programme, but are ALT’s in Maebashi. I don’t know exactly how the JET application process and selection works, but the vast majority of JETs I’ve met are really well rounded, incredible individuals that I have no doubt will rock at their jobs and lives in Japan. As for some of the other ALTs… I’m not so sure.

Anyway, many second and third year JET’s are on a committee that hosted the orientation. Lots of useful and relevant living and teaching info. The experienced JETs are all really cool too and really made us feel comfortable and are more than willing to help us out.

The first night of the orientation, we had a big reception dinner and lots of important people whose names and positions I don’t know were there to show us a good time. I think this is the prefectural head of foreign affairs. Our orientation was covered by the local news, and I was totally on it drinking sake with this woman. My principal was all excited to tell me that when we came back to school after holiday. 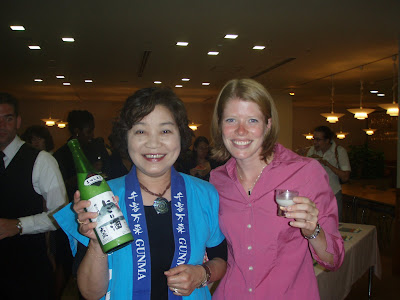 We had bento boxes for lunch every day. TONS of surprises – some better than others. This is a pic of one of ‘em. That pink and white thing in the middle was my first experience with “fish cake”. It’s like a gelatin, and really creeped me out – but tasted better than expected with a name like fish cake. The picked plum in the rice was awesome, as was the mysterious meat ball in spaghetti sauce. The actual spaghetti however, was covered in mayo (booo!) That lil yellow blob you see is eggs: they’re kind of scrambled, but way lighter and sweeter and American scrambled eggs. I find it in my bento and dinner sushi boxes all the time, and have actually developed quite a liking for it… in moderation. 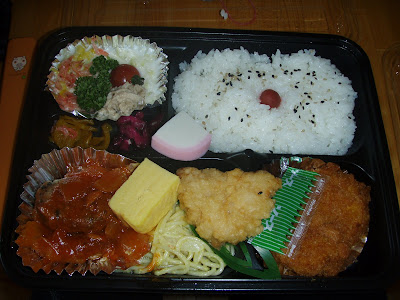 What’s an orientation to Japan without karaoke? 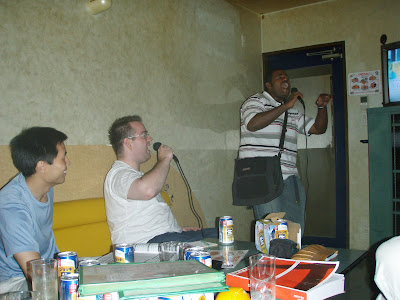 On the third day of orientation, we got to do some cultural workshops. I chose to learn about karate, koto & shakuhatchi, and shiatsu. This guy could kill you, and smile afterwards. 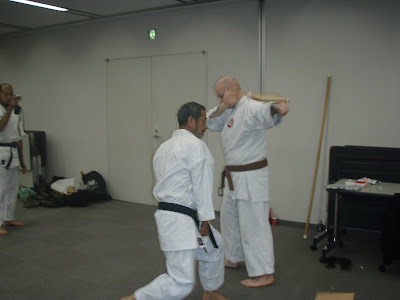 This guy has been playing the koto for over 35 years. He tried so hard to get me to able to play, but all I got out of it was a pathetic little whoosh. He was super excited about it though. These women are playing the beautiful stringed instrument called a shakuhatchi. Seriously really cool sound, and when they play all together, it’s really beautiful. They even let us all play them and learn the “Sakura” song. They were all like, “oh, it’s so easy, even my 7 yr old daughter can play it!” But then I got up there and proved them wrong. 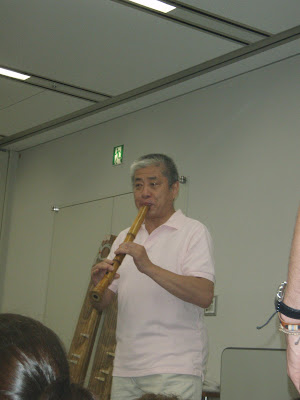 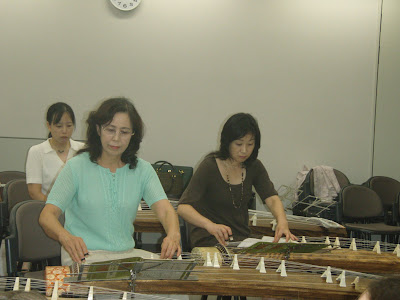 Best part of the whole orientation: shiatsu (which literally translates to finger massage). I think it’d be sweet to ‘master’ this art form and bring it back as a little side business or I guess a bonus attribute for future love-interests (wink-wink). This session got cut short a bit in order to end on time, RIGHT before I was about to get me a foot massage. My partner Kristine rocked the shiatsu the rest of the time, but refused to give me a foot massage. The shiatsu sensei (teacher) came back after our orientation finished up to offer the massage to me then! I was astounded at his generosity – what a sweetheart! Unfortunately, I had to jet – but I DO have his meishi (business card, which all Japanese procedurally give out to new acquaintances) and might take him up on some lessons sometime. 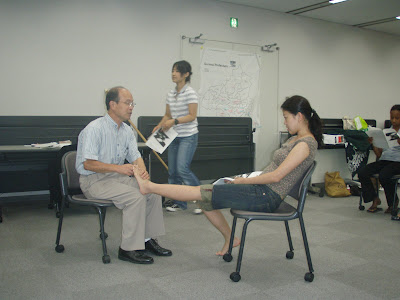 I also ventured up to the 30th floor of our prefectural government building to get this amazing view of the city. It’s weird, because it definitely doesn’t feel this big at all when you’re just riding around on your E.T. bike. It definitely puts it into perspective. 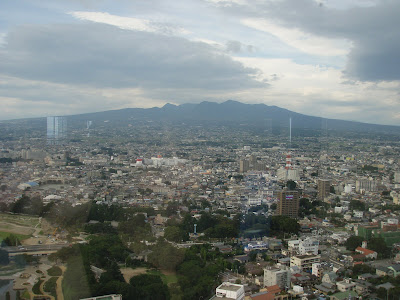 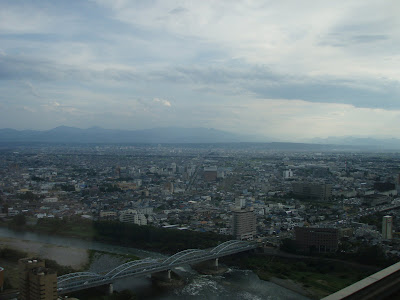 Hello Sarah,
We are really loving your entries. Thanks for taking the time to write us about your different experiences.You are so right about festivals being worldwide. It shows that we are truly all the same. We all love food, drink and entertainment.
The other area where we are similar is with work orientations. I just chuckled when you mentioned the endless hours of sitting. At Elmbrook the new teachers go to a "New Hire Orientation". It lasts all day. Then the next week they report to another "Staff Orientation" where they spend another day with their new co-workers and principal.Then the next day they meet for at least half a day with their grade level to plan for the new school year. That is 2 1/2 days of sitting and listening. I don't miss that part of teaching at all!
We are glad to see that you are finding time to explore Maebashi and Tokyo.It looks like you are having a great time in your new city.