On Christmas mornin', we had yet another early wake up to get our butts on a van to head to Kanchanaburi. Chris was the last of our crew to make it in to Bangkok, so then there were six.

Kanchanaburi is 130km west of Bangkok in the slightly elevated valley of Mae Nam Mae Klong amid hills and sugar-cane plantations. It appealed to me for the smaller populations, trekking and nature aspects. It's most popular tourist-wise for the the "Bridege on the River Kwai", which I knew nothing about before but became pretty intrigued with.

It's always hard (if not impossible) to pick a "favorite" of a trip, but the two days we had here top the list for me. It was hands down my favorite accomodation. We slept on these little floating bungalows on the river. There was a little dock to hang out on before dinner and we had the luxury of mosquito nets around our beds. It was privately owned, and the owners cat chilled with us the entire night. I'm convinced the little guy stole my $10 mosquito spray. Still bitter. 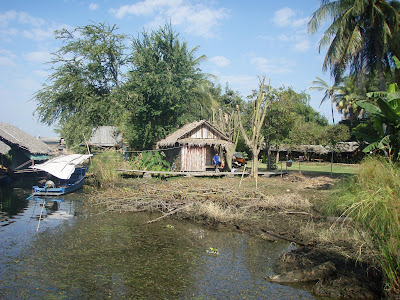 This is a shot at sunrise of the moon and our bungalows. 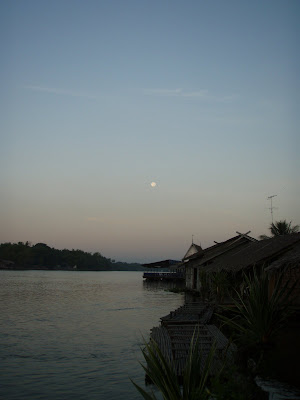 First on the agenda, a relaxing bamboo boat ride down the river. Oh, and in case you didn't notice, those obnoxious white sunglasses were one of my stellar purchases at the Lumphini night market. You'll see lots more of these babies to come! 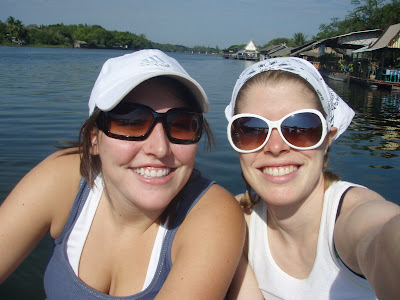 We were heading toward the temple you see in the distance. 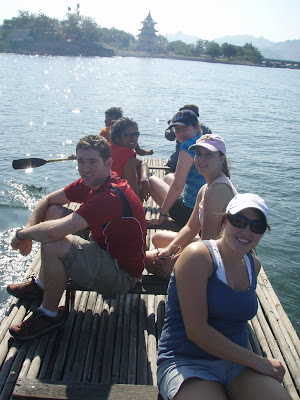 It was just like camping on the Wisconsin River, I rowed while Frank sat and watched. I was the only one to volunteer to row here... 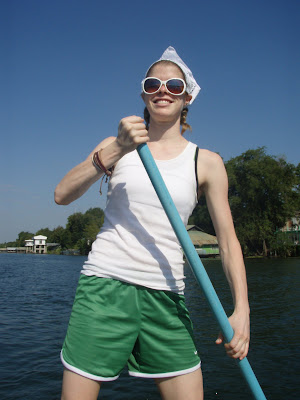 but I'm pretty sure these guys did most of the work. 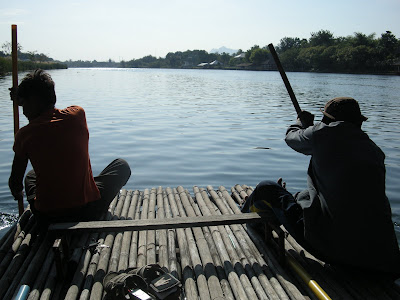 Annnnd we made it! A super nuveou Chinese temple. I can't remember when it was built, but it definitely looked really new. Maybe the late 1900's??? It was prettttty. 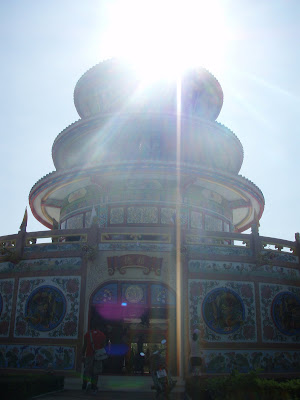 This picture is for you, Miller! 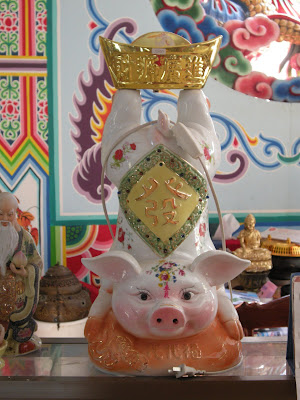 Is it just me, or does this ancient Chinese guy in a box remind anyone else of "Zoltar", from BIG? I was looking everywhere for a coin slot and card opening, but no luck. So instead, I just prayed and donated some money to the temple. 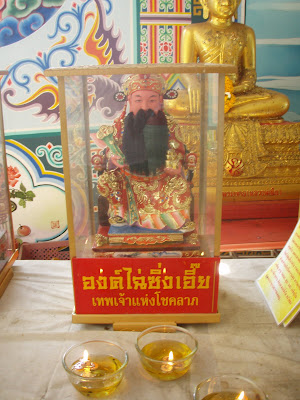 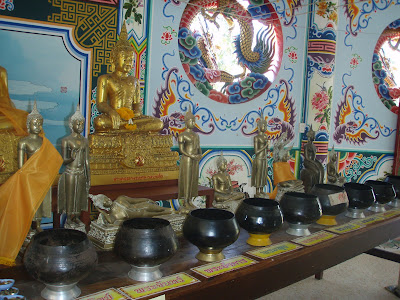 This mural was gorgeous! My favorite part is the fat little kid in front with the three mohawks. He looks soooo happy, playing in the clouds with a giant peach and his family all around him. He'd better be careful of those giant sticks on his Dad's head though... those look dangerous. 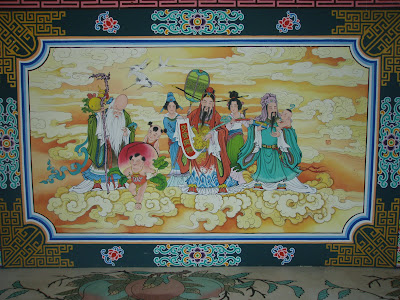 Like I said earlier, this area's main draw is the Bridge over the River Kwai. Since I knew nothing, other than what our history buff of the group, Chris, could tell me, our first stop to the Thailand-Burma Railway Centre was much appreciated. It was a small, but modern museum run and designed by an Australian veteran. It had really touching and well thought out galleries and displays that helped me undestand the history.
Basically, when the Japanese occupied Thailand from 1942-43, they thought a railway would provide a secure alternative supply route for their conquest of Myanmar and other Asian countries to the west. Japanese engineers estimated it would take five years to link Thailand and Myanmar (previously Burma) by rail, but the Japanese army forced the POWs to complete the 415km railway in 16 months. Needless to say, with the rigorous physical work, difficult terrain, crude supplies, lack of food and spread of disease, an estimated 16,000 POWs died while building the Railway. Additionally, over 90,000 laborers from Thailand, Myanmar, Malaysia and Indonesia died in the area during the occupation.
If you'd like to know more, check this out: http://en.wikipedia.org/wiki/Death_Railway . 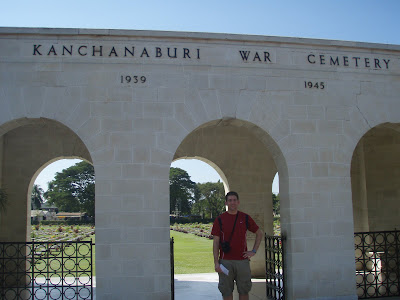 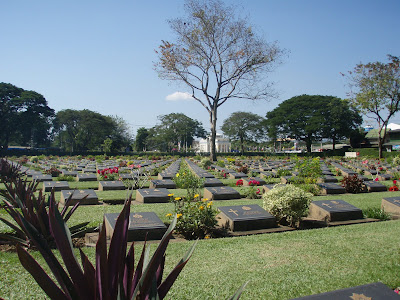 An enlightening but somber morning for sure. It was weird to take in all the information as an American living in Japan. I felt somewhat guilty about the history as a current resident and wondered if the Japanese population was as naiive as I was to this horrific past. As usual, I had more questions than answers - but, I still came out more informed, which is a start.
Next up: Erawan National Park! I was seriously so pumped to go here and definitely was not disappointed (except that I easily could've spent an entire day here instead of a few hours). It was absolutely stunning. It's a seven-tiered waterfall that feeds into Mae Nam Khwae Yai. The top pool (which we didn't make it to, despite our INTENSE hiking efforts) was 2km up from the base. I knew we were gonna have a good time when we saw this sign: 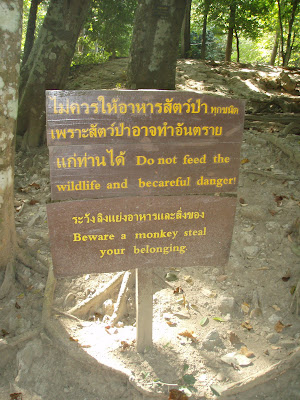 We didn't see any monkeys, but we did see lots of fish. You can see them all swarming around the only place to get in to swim to the first waterfall. It took some people ages to get into the water while Katie and I were left to tread out by the waterfall. Their concern was semi-valid though, because these guys bite! It didn't hurt, and some people were trying to convince it that it's actually good for your skin - exfoliates it - but, I wasn't having it. 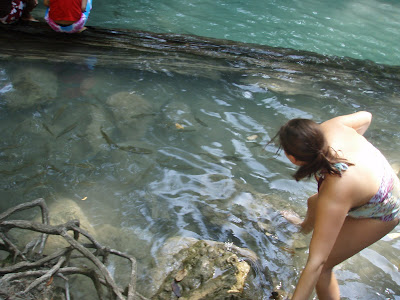 Trying out my waterproof digital camera for the first time... thank God it worked! So, our whole group of 6 got out here, and then we eventually swam back, only to talk to a few Thai girls that really wanted to go out there as well, but didn't have the confidence (what with their inability to swim and all). SO, we ended up escorting two Thai teenagers back out to the waterfall and successfully did not drown them. Their friend may have taken the worst pictures of the event ever, but it was hillarious none the less. 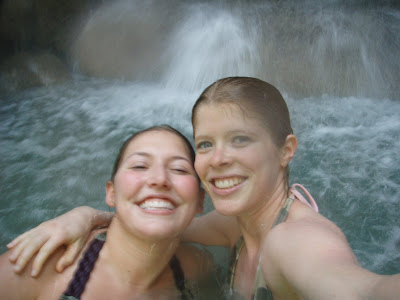 Here's the gang under the third tier of the waterfall. We also took one in front of it, but the people in the directly underneath the waterfall look like they're getting murdered. Apparently it was painful. I was in front, and loving it. 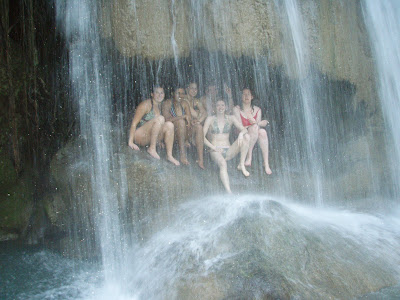 I heart wildlife, and despite our basically frantic pace hiking trying to make it to the top, ended up spotting a few beautuiful butterflies. 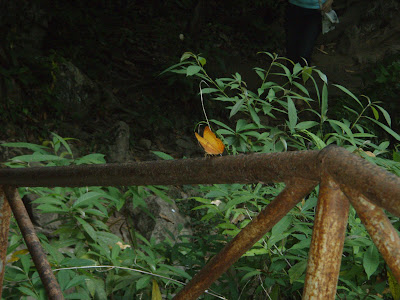 Your guess is as good as mine as to what this could possibly be??? 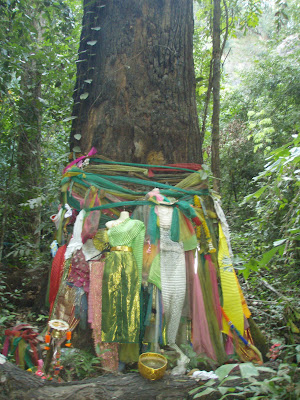 Well, we made it up to the 6th tier - gorrrrrgeous! 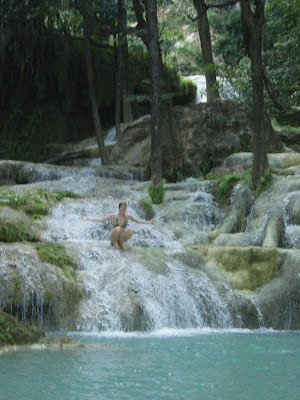 After the park closed, we still had a bit of time before dinner, so we went to the actual Death Railway Bridge. Despite being bombed several times during WWII, most of the bridge has been rebuilt and is still usable as a means of transportation. Below is a train used on the railway in 1945. 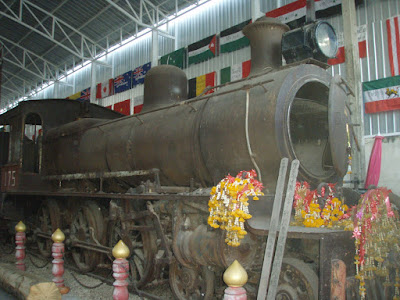 A super modern wat (Wat Chaichumphon) was inside the Jeath War Museum. We went in here to get a better view of the railway and found some creepy, worn-down, but informative displays on the history as well. 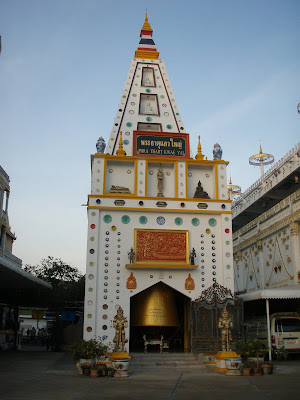 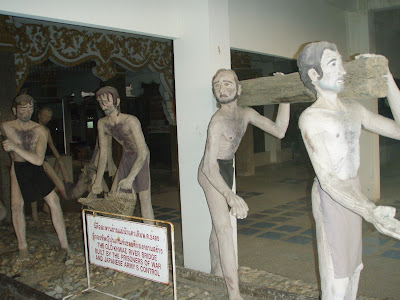 View of the River Kwai. 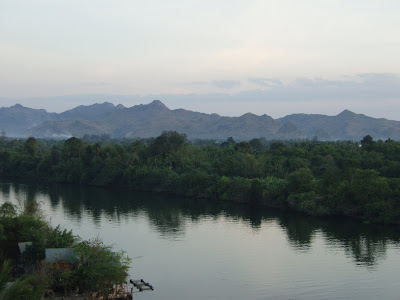 View of the Bridge over the River Kwai at sunset. 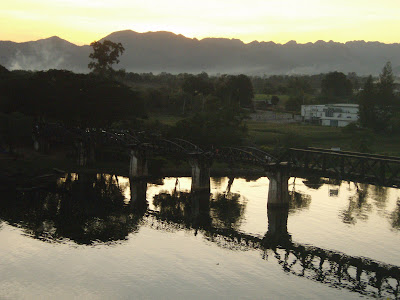 Here comes the train! People were lined up all along the railway, like actually on the railway. How nobody got hurt, I have no idea. 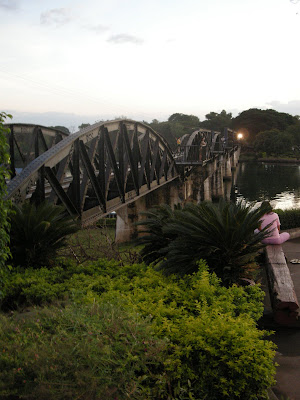 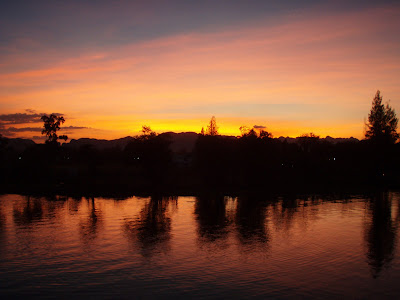 That night we had a wonderful little intimate Christmas dinner prepared for us by the owners of the bungalows. The six of us and a woman living in Madagascar ate, drank, and were merry as we reflected on Christmas memories past. Some of the workers joined us and we played pool on what may have been the oldest pool table in the history of mankind. I wasn't really sad not to be home that night because I was so happy I'd had such wonderful Christmas pasts to reflect on and share. Plus, I was sharing the holiday in a totally new way with new and old friends. I slept great; which could've been due to the quiet ebb and flow of the river or the 40's of Singha I enjoyed. Either way, my Christmas was most definitely merry!
Posted by Sarah M at 10:09 PM