Alright, so we're up to Friday, May 2nd now. After arriving in Hiroshima at 5am on an overnight bus (Jenny's favorite accommodation/transportation) and taking that all in, we were on our way to the island of Itsuku-shima, more commonly known as Miya-jima. Hiroshima's got a sweet streetcar system, so that was mildly exciting, as far as transportation goes. Wide mo fo streets up in that city post A-bomb; an excellent time to be inventive and make the most of the situation.

We made it to the coast, but trying not to knock over small people is always a bit of a challenge. Look out! 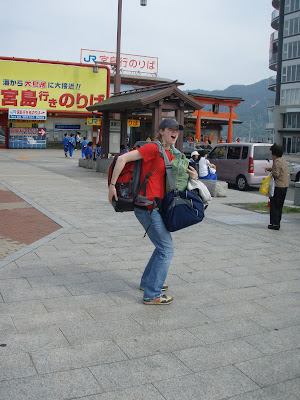 And of course, lots of strenuous bag carrying and walking calls for a regional ice cream flavor break: this time around, sweet potato and grape. 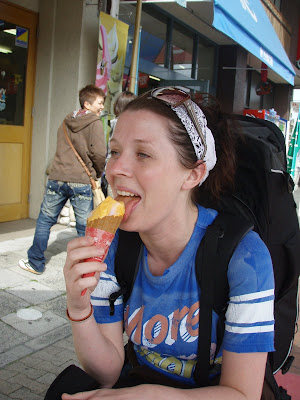 Taking a short ferry ride to Miyajima. Namely, this island is famous for it's red 'floating' torii (Shinto shrine gate). It's considered one of Japan's three best views and is one of the most photographed tourist attractions in Japan (of which there are MANY!). But, I found out it also has some hiking and camping and tourists tend to see it as a day trip, so I thought it'd be a nice change from the crowded cities we'd been visiting. If you look closely at the picture below, you can see the red torii gate in the center. 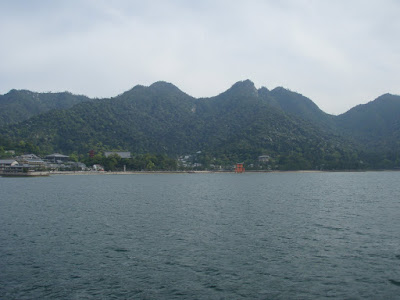 Our camp site was on the opposite side of the island from where the ferry arrives, but the island is pretty tiny so we took an overpriced taxi to get there (probably negating the cheap accommodation we got in the first place). The camp grounds were really nice, with an immaculate beach (too early to swim yet though), huge pond, tennis courts, large open field, and flowers in bloom. 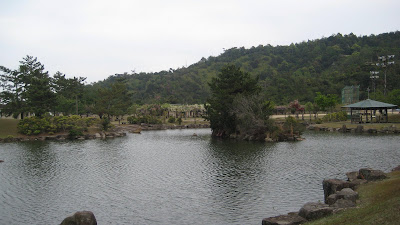 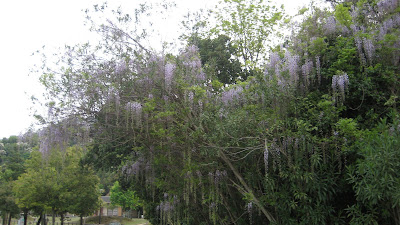 I reserved a tent ahead of time and expected to be pitchin' it when we got there - a pleasant surprise having it set up already! It was the first Friday of Golden Week Holiday in Japan, so I expected the grounds to be packed... we were one of three other tenters in the area. We were the only ones set up on the these wooden planks, and I'm pretty sure the only one without sleeping bags or real BBQ food. Instead, we came correct with Conbini food, canned cocktails, a deck of cards, my bike light, Jenny's wind up flashlight that was absolutely worthless, and lots of clothes for "warmth"/bedding. This is the location we "went to sleep" at around 10pm (a few hours past sunset), woke up at midnight at, got serenaded by the raucous noises of raccoons and deer at throughout the night, and "got out of bed" at like 5am at. Sleep deprivation made us two of the giddiest, slap happy girls on this island. 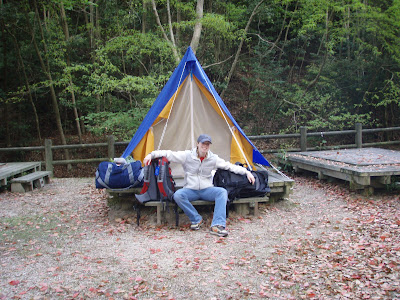 But before I tented it, I touristed it. I had to see what this view of the floating torii was all about. On the way, I got a glimpse of all the tame wild deer on the island. They're tame, but they doooo like our food! 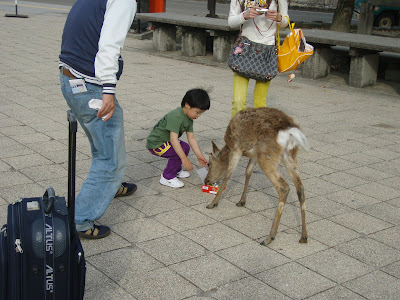 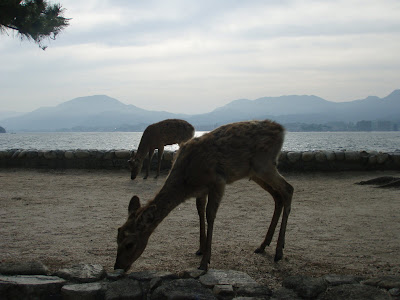 There's one main drag of touristy shops on the island, cleverly located between the ferry drop off point and the floating torii. I was kind of looking for omiyage, but mostly I was just sampling the local treat of red bean filled maple-leaf shaped waffles! Mmm.
These guys were cute! 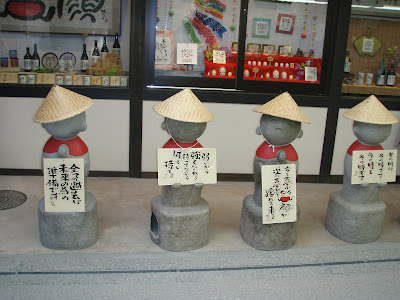 And because it's Japan, Miyajima had to display their "world's largest" item: a wooden rice paddle. 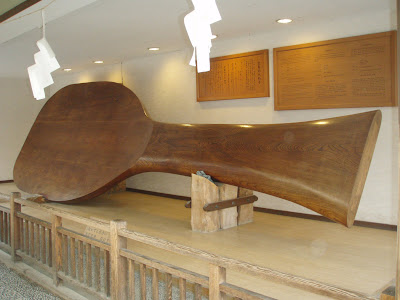 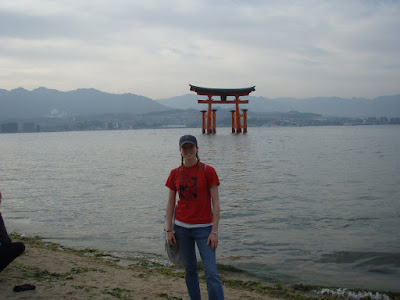 But as the sun set, and the tourists all had to leave on the last ferry back to the mainland, I really understood why Miyajima is classified as one of Japan's top three views. 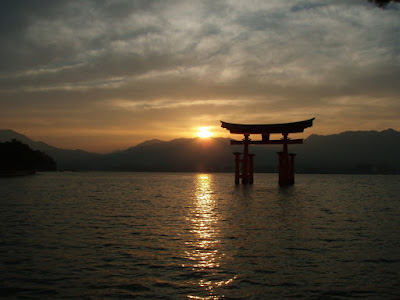 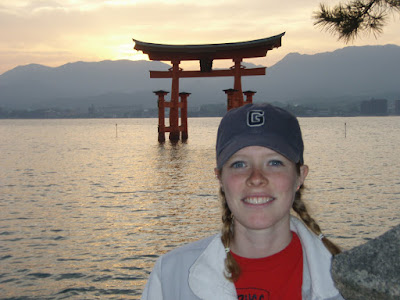 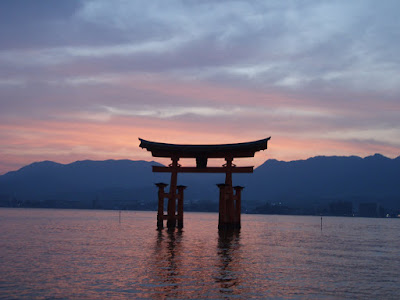 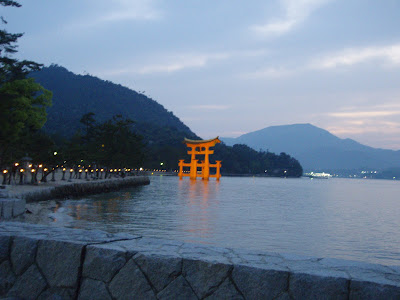 Oh yeah, and through my town site seeing, this was the welcoming entrance to the bathroom. I was almost tempted not to go, but when you gotta go... 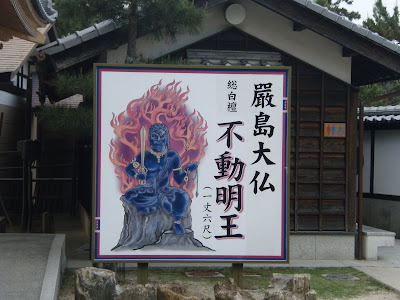 Fast forward to the morning after a very cold, scurry, and sleepless night of camping (greaaaat idea on my part) when I convinced Jenny since we couldn't sleep anymore, the best thing to do was go for a hike. 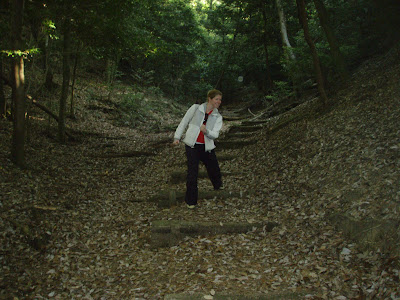 Soooo worth it - the view from the top: 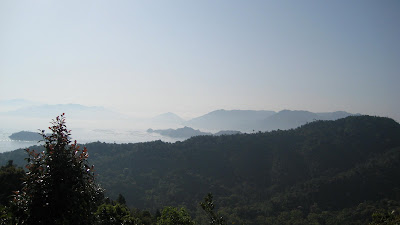 Awww, even though they surrounded our tent at night and tried to eat my bag (despite Jenny insisting they wouldn't!), I think I'll miss these guys! 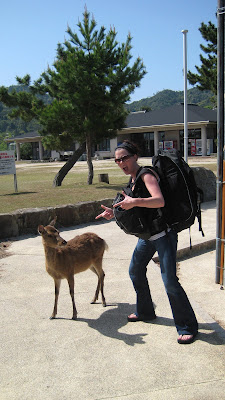