For the past 5 years at this time of year, I've been cramming for finals, making my annual "I'm a townie and proud of it" high school visit, spending time with family, and overindulging in all the delicious foods the relatives continuously cook up!

This year was a little different. I didn't miss the cramming a bit, but I certainly missed time with my family and friends at home. Luckily, it gave me yet another excellent reason to reach out and remind others (and myself) how thankful I am for their presence in my life. I'm also really lucky to have already formed our own 'lil Gunma family and made some great friends so far. I missed the Gtown romp, both at school and Bubs (or whatever local bar is popular these days), but I had my fair share of cheap wine here and great company. I missed out on Aunt Mary's delicious green bean casserole and deviled eggs and Nicole's always delicious desserts (namely because they have ice cream), but we had an amazing "traditional" Thanksgiving spread here; better than I could've ever expected (but with a price, which I've never had to dish out before:) ) 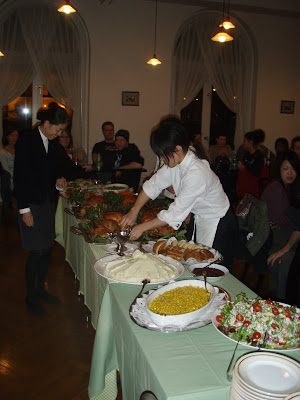 Laurel and Chris opted to carve the turkeys. I opted to graciously accept and devour the turkey. 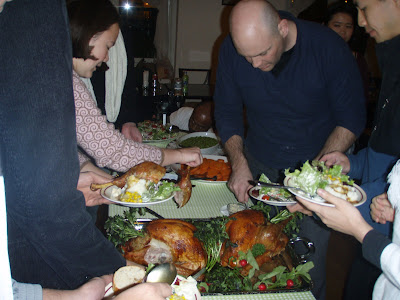 I can't lie - I was a little concerned it looked overcooked and was gonna be all dry, but I underestimated the Japanese on this one. It was perfectly moist and fell off the bone - which worked out great with the lack of knives on the tables. 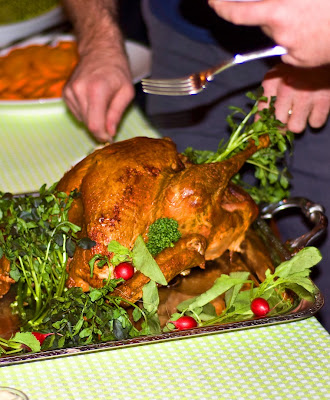 Shane and Terry wasted no time digging in. 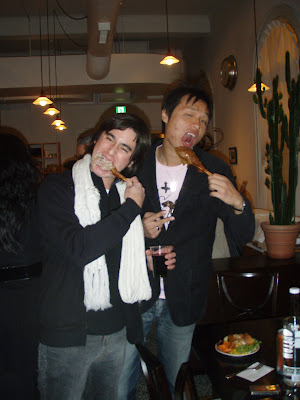 Gotta get the family table shot!
PS - You can save yourself the effort of asking me where Waldo is... I got asked like 12 times that night... he's in Hawaii though, in case you're wondering. He's trying to escape the coldness of Gunma. 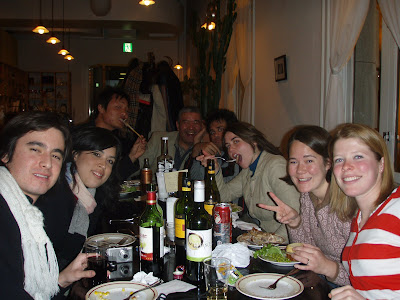 Even though the dinner was "endless", there's always room for dessert. 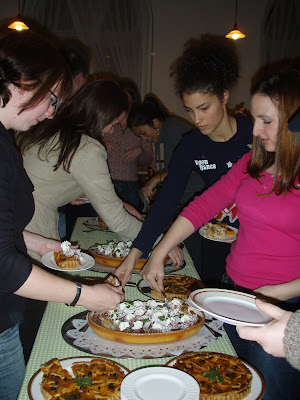 And even though I try pumpkin pie EVERY YEAR thinking, "maybe I'll like it this time around. I should - it's tradition!", another year passed with the bitter taste of pumpkin pie on my tongue. Luckily, they also had bread pudding. THAT was delicious! 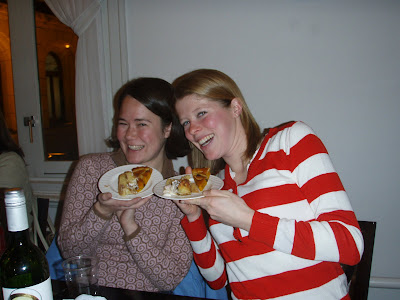 Okay, now not to underscore the awesomeness of Guitar Hero, which was played at home last Thanksgiving, but there is a close runner up here with Wii. After dinner we headed to Alex and Laurel's for what seemed like neverending options of games that were awesome. I don't care if this system is for the video game challenged and totally dumbs the "gaming" down - that's just my style! I dominated at cow racing (which is what Laurel and Kurtis are doing)... 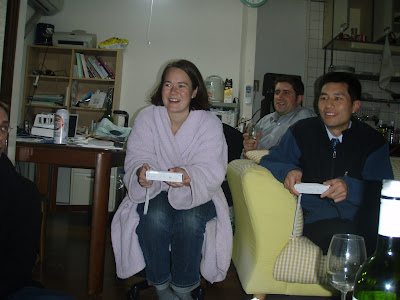 but not so much the "find your own Mii" game. It was awesome, nonetheless, but apparently it takes me about 2 seconds longer than everyone else to find the matching or nonmatching Mii. I think I found a way to over analyze a video game... which doesn't help point-wise. 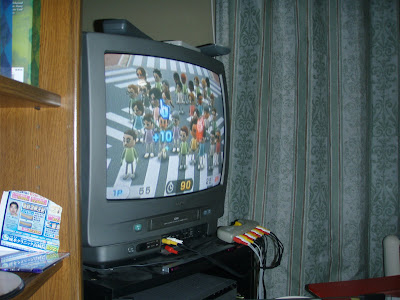 But as soon as they brought out boxing, I was back in the game! 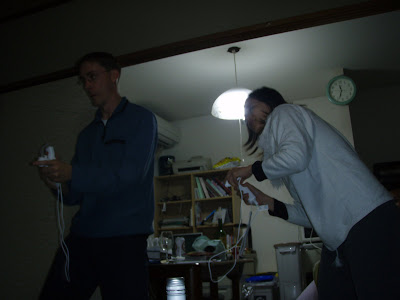 All in all, it was a pretty great Thanksgiving celebration. I taught my elementary school students about Thanksgiving (very 'dumbed down' version) and what it means to me. I reinforced that in America, it is a national holiday and most everyone gets off of work on Thursday. I think I made the teachers and principal feel bad and they kept apologizing and thanking me for being there. It wasn't the intent, but it was sweet anyway. Japan does have "Labour Thanksgiving Day" on Friday, and many families go out to eat and travel during the 3-day weekend.
In holiday tradition, I've got to say, that "This year, I am thankful for many things (that I'm not gonna list because it will bore the crap outta ya). But, I will say that I am thankful for the wonderful opportunity I've had to live and travel here in Japan so far. I'm thankful for the support I've received at home and here. But most of all, I think I'm thankful for modern technology, which (when working!) has allowed me to stay in touch with family at the most crucial times - expected and unexpected. Also, thanks to those who have continued to make the effort to keep in touch and remember me:) Love Ya'll!"
We are now clinking imaginary glasses - Cheers!
Posted by Sarah M at 1:10 AM

Love all the new photos. I must say, you do a mighty fine job keeping us informed on your stay. Although you are thousands of miles away, the world wide web has sure enabled famiies & friends to "feel" much closer.

I think of you often and wish you continued happiness on your venture! You truly look happy which makes us smile here in Wisconsin!