When you hear, "Harvest Festival", you're probably not intrigued in the least. Harvesting means farming, right? And what's fun about farming, or crops, right? Wrong!
The 24th Annual Harvest Festival at Coco Farm and Winery in Ashikaga, Gunma on November 17th had little to do with farming and lots to do with reaping the benefits of the grape harvest this year. Ie. wine! Ashikaga's this little town up in the north of Gunma that took me a bike, train, and cab ride to get to; but man, was it worth it! 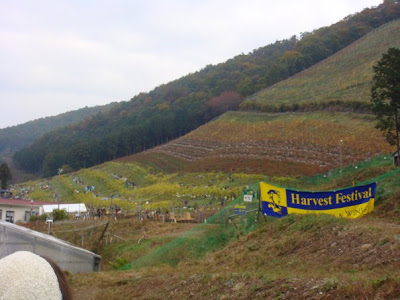 But before we could get there, we had to purchase our wine packets (complete with wine of choice, wine glass, corkscrew, and commemorative pin!), and pose with these ridiculously awesome wine bottles running around. 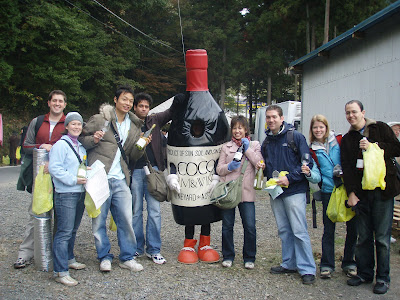 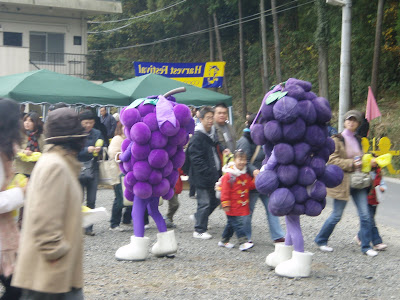 Not only were there a ton of foreigners actually attending the festival, there was international food being served all around. Brooke was super pumped that the first tent we came to was a "white dude with 'authentic' bread and cheese!" 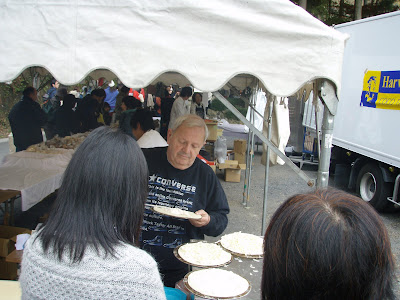 Getting closer to our destination, but free food samples distracted us along the way. If you look close enough, you can see a blown up wine bottle on top of the hill. Remember that. 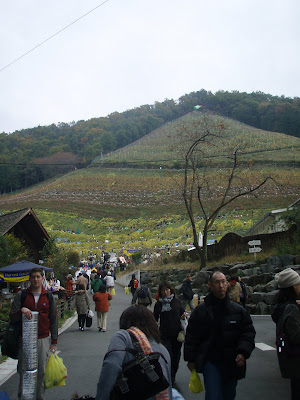 To the left was where we bought more wine. Too bad they didn't have samples of that out. Namely because the bottle we got was pretty disgusting and sampling would've helped make a better choice, but also because I really like free samples. 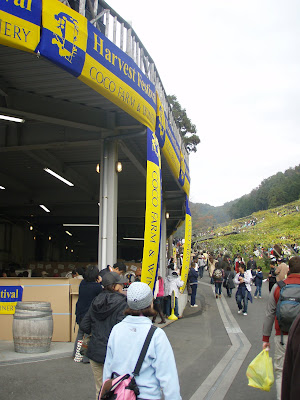 We got there shortly after the scheduled starting time, and it was already PACKED. We made space on a very slanted portion of the hill. 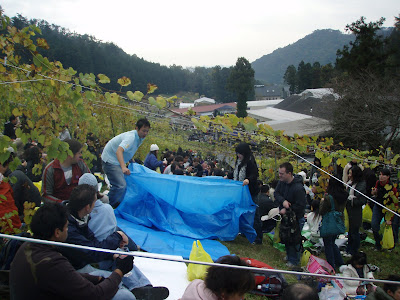 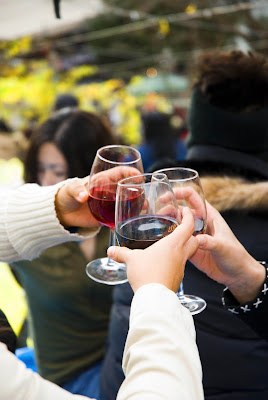 We foreigners tend to clump together to enjoy things. There was red, white, and a rose wine to choose from in the packaged bags. 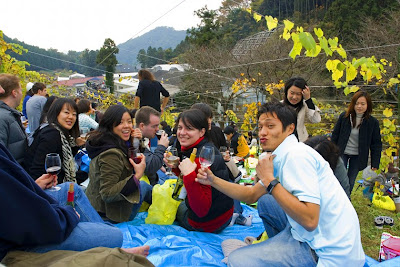 Onto that tasty "rustic bread" and goat cheese! Mmmmm. 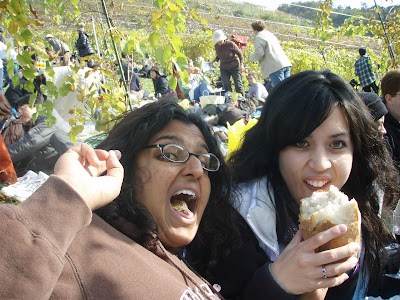 I was pretty torn between the comfort of sitting on my butt and enjoying the beautiful scenery, great company, live music, and of course, wine, OR getting up to walk around and try out some more of that tasty food! Eventually, food won. I did NOT choose giant chunks of ham on a stick. 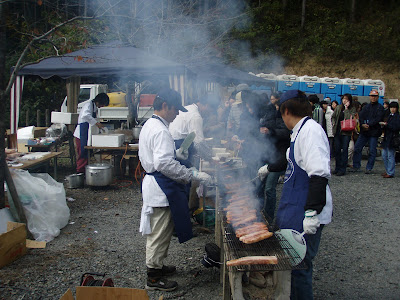 Instead, I got me a pork taco, served right outta the cart, just like in Mexico... 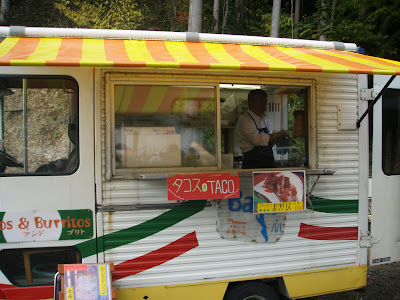 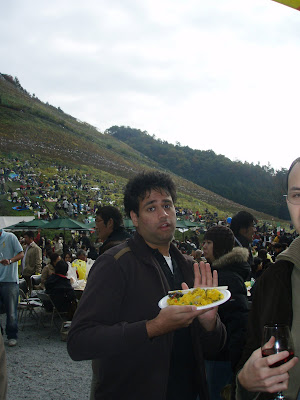 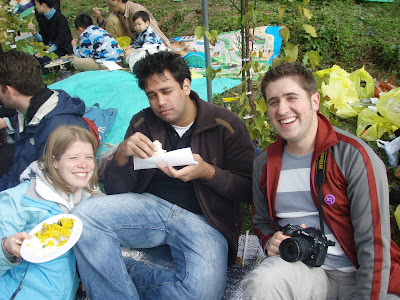 What's this? I don't have to move to get food because a guy came up the hill to us! And it's ICE CREAM!!! Yes, please!!! I'm so excited for wine and grape ice cream that I couldn't be bothered asking someone else to take the picture. 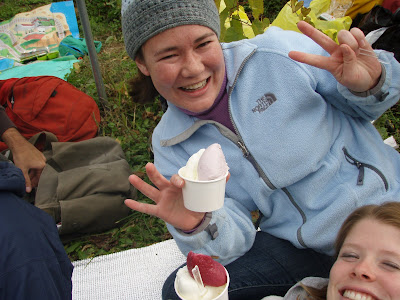 Back down the hill again for more food and wine perusing. On the way, I decided to test my Japanese out. The couple below had a pitcher of what looked like sparkling apple juice or something, and I wanted some. Our conversation went as follows:
Me: "Kore wa nan desu ka?" (What is it?)
Him: "Insert a response consisting of Japanese words and some motions here"
Me: "So desu ne! Ikura desu ka?" (Is that so? How much does it cost?)
Him: "ni-sen san-pyaku-en" (2400 yen)
Me (after much thought trying to figure out the cost): "Haiiii, wakarimasu. Oishii desu ka?" (Yessssss, I understand. Is it delicious?)
Him: "More Japanese words and motions, resulting in a full pour of the drink in my empty glass!"
Me: Happily test out the drink, which was fantastic!
Him: "Disuki desu?" (Do you like it?)
Me: "Haiiiiiii! Disuki desu! Oishi desu!" (Yes! I like it! It's delicious)
"Nihongo wakarimasu!" (I understand Japanese!) After which this celebration ensued. 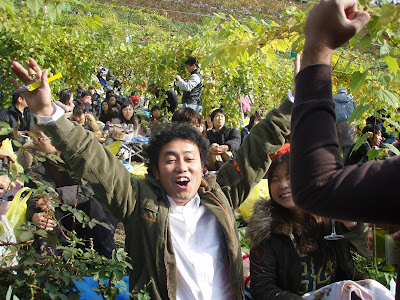 There was also live music: three bands ranging from jazz to jam band jazz-y. We tried to get up closer to listen to them, but immediately got booted out because we didn't have the necessary VIP passes. We were literally followed from the deck down to the first floor. I did sneak in this pic of people on the hill though. 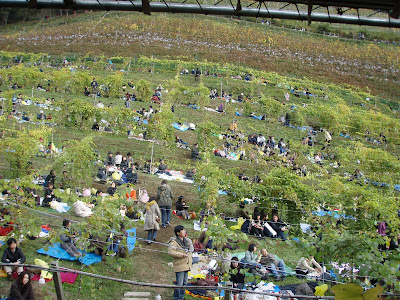 Back to relaxing on the hill with food and funny stories. 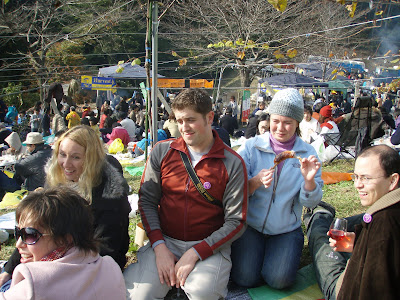 Dressing pets up in people clothes (because that's who clothes are for - people) is a HUGE pet peeve of mine (pun intended). But, for some reason when Carol and Kristine got all cutsy with this one, it was okay. 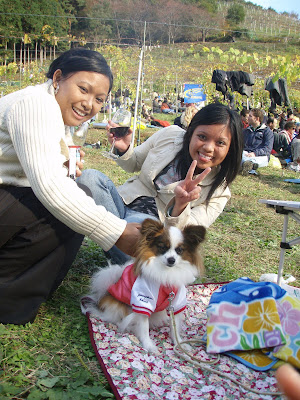 A view of the hill and designated eating area. 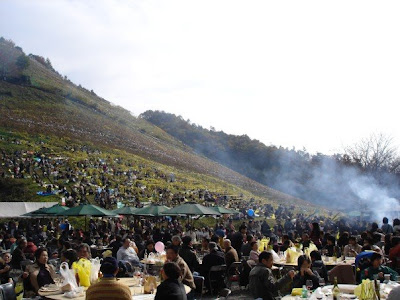 I'm not sure who thought of it first, but looking up at that hill, somebody realized "we need to climb this hill. We need to get to that blown up wine bottle." And so we did. We met these fun Japanese people on the way up who serenaded us. 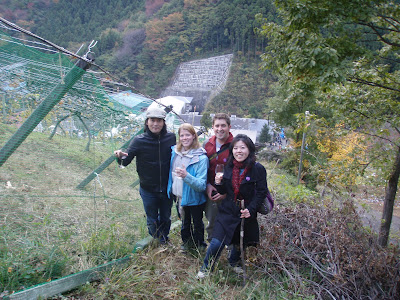 These are some of our other friends. No idea what route up the hill they took! I saw these pics later. 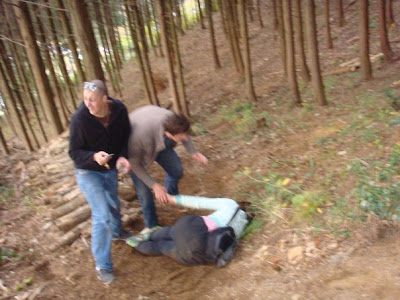 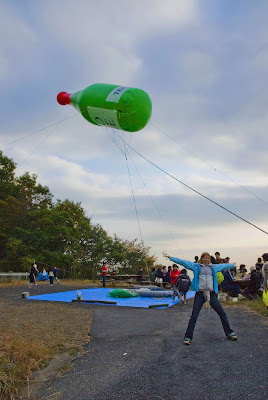 Thanks again, Alex for your awesome panoramic shots. This is looking over the city of Ashikaga.

And down over the festival and Coco Winery. 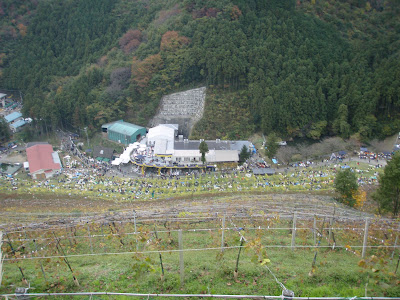 I kept thinking "somebody should tell this guy he can't fly!" 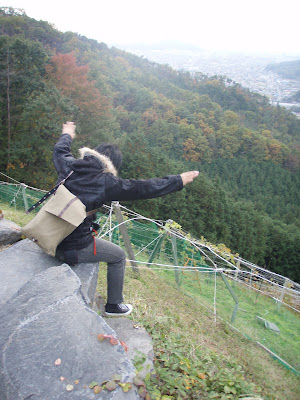 Alas, we all made it to the top! 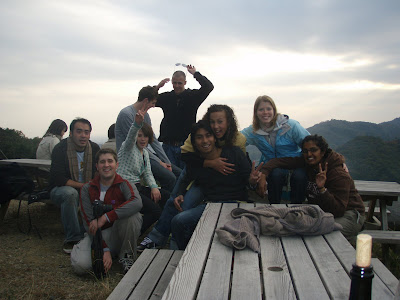 Op, one more shot with the massive wine bottle! 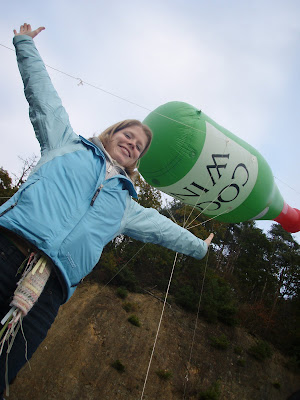 That could possibly be the least flattering still shot of me ever - so click on the play button to check out the view I had from the top of the mountain at the Ashikaga Wine Festival, I mean, Ashikaga Harvest Festival at Coco Winery.
PS - I did seriously think about buying a bunch of bottles to send back to my wine affecionado family and friends, but I found out the price of shipping and taxes for the package and it's beyond ridiculous. Monatary efficiency overrules thoughtfullness on this one guys. Sorry to be such a tease:(
Posted by Sarah M at 8:17 PM

Sarah,
Merry Christmas from North Carolina! We are finally caught up on your blog and look forward to hearing about your adventures in Thailand! We enjoyed your Christmas photo card Grandma D and Uncle Ed and I will have a toast to you on Christmas Day. We love you sweetie...stay safe and many blessings to you! Love, Auntie Ginnie