...is a question I've been asked on more than one occasion here. In my self-introduction speech, I have a bit where I talk about the sports I like. I always act out the sport or show the kids an object from the sport and have them guess what sport I like. Every time I started sprinting around the classroom, kids would shout out "MARATHON!!!" I was always like, "Well, no, I've never actually run a marathon... I just enjoy running" until I realized marathon apparently synonomous with running. But I was asked it so often that it kind of furnished this deep burning desire to actually run a marathon. SO, when the opportunity arose for me to actually run in an organized marathon (albeit a half marathon), I was more than game.

I had met the Takahashi's for the first time over a Korean family style dinner and by the end of the meal and nomihodai (all you can drink for 2 hours), I had agreed to run in a costume marathon. That's right - COSTUME marathon. I was beyond ecstatic.

I didn't know if I could actually follow through with the commitment and went on borderline obsessed research and planning mode. I'd have to work training into a pretty packed schedule of "doing other things". I knew I'd have to make the proper exercise, nutrition, and mental adjustments/sacrifices and honestly didn't know if I could hack it. I love running, but had never gone further than 5 miles. I also pretty much had something planned every weekend and didn't know if I could fit the "long run" days of training into it (especially after a late night out when I presumed I wouldn't be feeling too hot the next day).

BUT, long stories short, I made the adjustments and rocked out. I enjoyed most of the runs I did and discovered new places in Japan to run. It was never physically all that tough; the hardest part was getting bored on the long runs where I was on the same path I'd been before.

The Samurai Marathon (Annaka Answi Toashi) has been an annual tradition for what is believed to be hundreds of years. In fact, it's considered to be the first marathon to be held in Japan. Apparently the local king ordered his samurai to run from his castle to the gates of a garden 20 kilometers away. It used to be that people would wear only Samurai uniforms, but has recently turned into a full out costume marathon (which about 80% of the participants took to heart). It's like a 20km State Street (with less beer and more running)! This is the promo poster for the marathon. 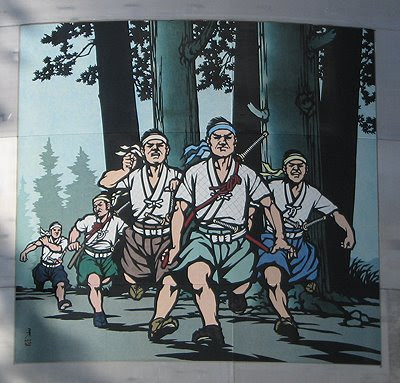 So, I met Takahashi #1 and Takahashi #2 on that fine winter night in Maebashi and we all became pretty close friends after that. Takahashi #1 organized the pre-marathon festivities like a pro. It is tradition for him and his high school friends (some going back to elementary school) to run this marathon together every year. We had a group of about 25 people for the BBQ, so organizing and making a BBQ and overnight in the bungalows out near Annaka in itself was a feat. KAMPAI!!! 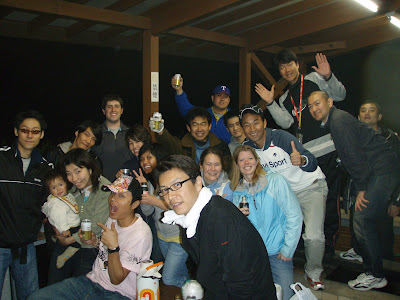 We had a delicious feast of miso soup, rice, yakisoba, sushi, grilled meat, grilled vegetables, and a first for me, grilled "fish children". They got me to eat one, eventually. I LOVE salmon eggs, but these fish bellies chock full o babies were not the most delicious. 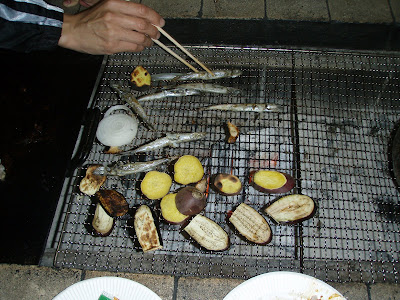 The next morning we woke up real early to clean up the site and get over to the race. The weather was absolutely disgusting (cold and rainy), but that wasn't stopping us runners! Awww, look at our cute little supporters with their umbrellas and hungover faces! Adorable! They were such great supporters - I bet they were even thinking about the marathon while they were out to breakfast;) 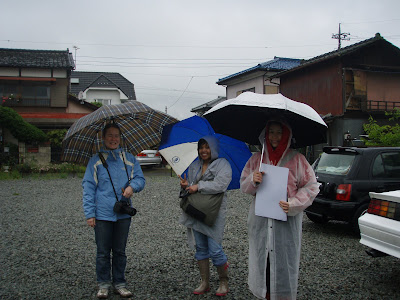 We finally made it to the starting lot. Here's a runner upholding the samurai costume tradition. And yes, he ran with that stick the ENTIRE way. 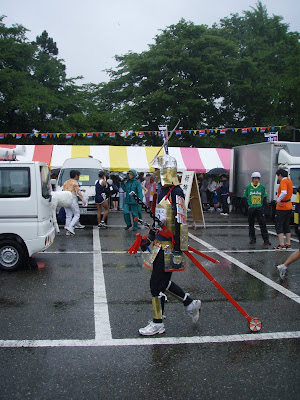 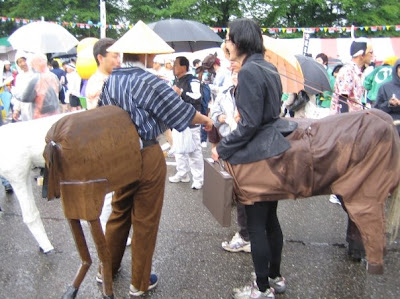 Kamara shows us some lovin' too! 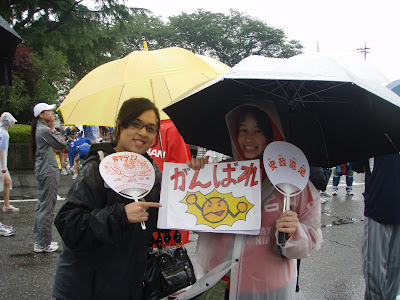 Tomomi decided to run the race at like 10pm the night before. I love her! My Mrs. Incredible costume was pretty ruined with the bright blue rain jacket I had to sport over it, and Tomomi was bummed about her last minute 'costume' arrangement, but we were smiling anyway:) 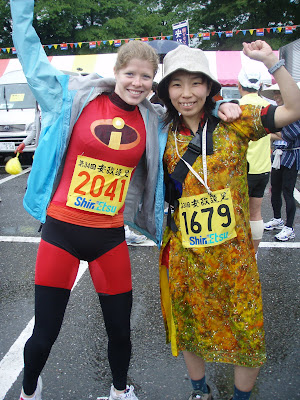 The She-men cheerleaders... love it! 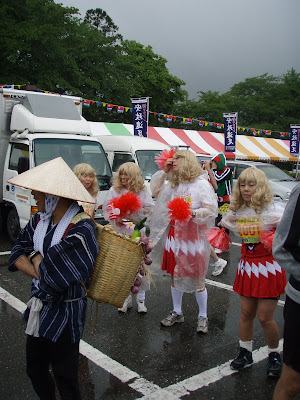 On your marks, get set, GO! (or you know, the equivalent in Japanese, with fireworks going off simultaneously). 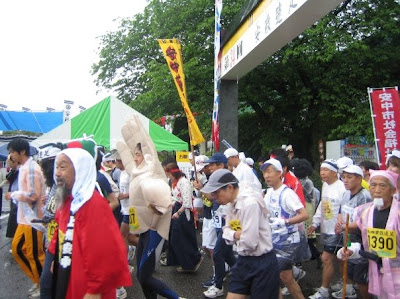 Tomomi is clearly the most dedicated runner in the race (dedicated to her husband and baby that is). 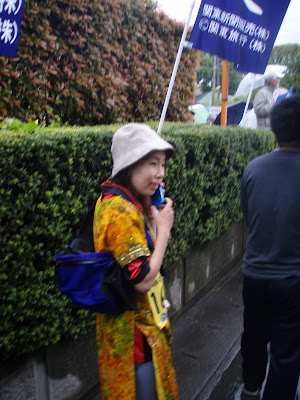 This guy was supposed to be a ghost, apparently. As Takahashi#1 said, "It's too much. Too much". 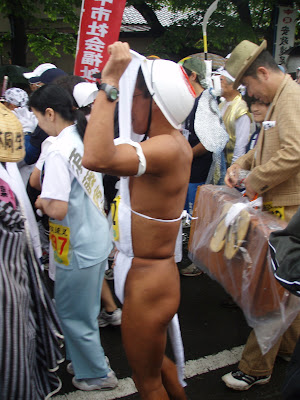 Oh no! Shinkansen down! 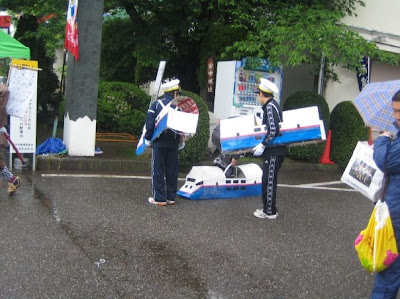 Where there are Japanese, there is a love for Disney. 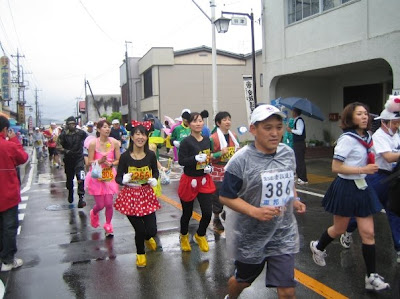 As you can see, it was pretty slow moving for like the first few kilometers. I didn't really have a time goal though, I just wanted to finish. So, it was fun seeing all the costumes as we all gradually split up. 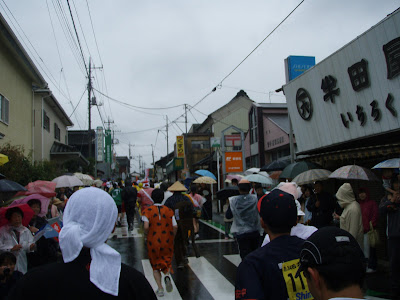 At the end of the race they announce the winners for the costumes. I'm not sure exactly what it's based on, but I guess this guy won. It's a model of a Japanese comic, The Butt Muncher. Yes, he's some sort of bug, that munches butts. It's funny, but I definitely saw cooler costumes. 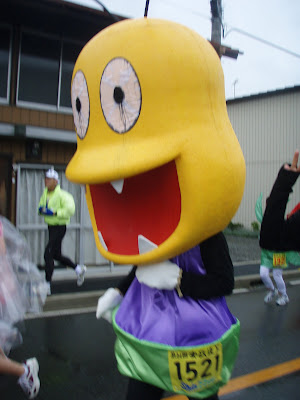 Despite the rain, the run was incredible. It was absolutely gorgeous, and had a really diverse terrain. I had to idea what to expect and had no real gauge on distance, which is when I run best. If I know where I'm going and landmarks and how long it takes, my brain goes on repeat and is not stimulated in the least. So all the costumes and scenery totally made this my favorite run ever. The rainy weather gave the mountains a really mystical vibe that was so sweet. 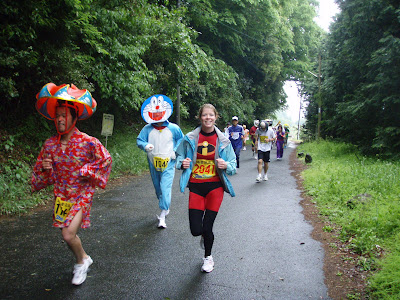 And the support was unbelievable - there honestly wasn't a stretch of the 20 km run where there wasn't anybody standing on the side cheering. 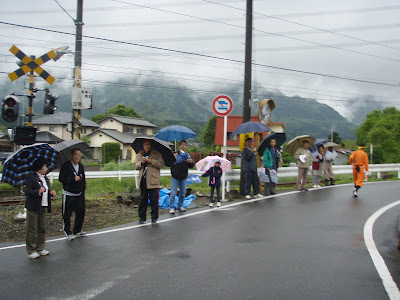 Check it out - this guy is running barefoot! 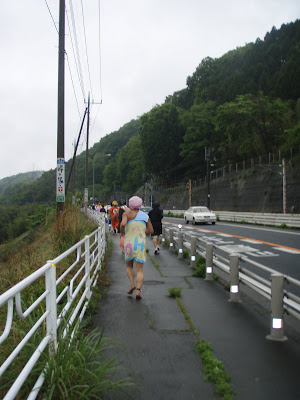 And of course, I had to do the cheesy "I completed the 1/2 marathon" pose at the end. 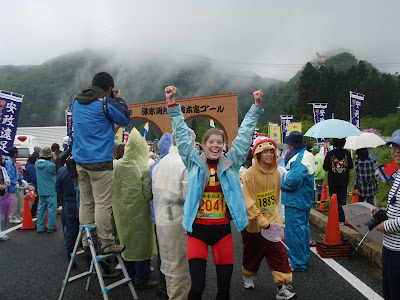 My goal was to finish the race with a smile on my face, which I did... but I also kind of had a goal to finish under two hours, which I also did. I also assumed the guys in our group would kick my @ss, and figured we'd meet up in the end. To my surprise, I kept up with the two fastest guys (who we dubbed Brandon and Ryan: everyone got a new English name!) in our group, and even got a burst of adrenaline at the end which left them in the dust. I finished 17th out of the approximately 300 women that were competing, which is better than I could have ever expected. And, it gives me a goal for next year!
"Brandon" and I with our completion certificates and miso cucumbers. 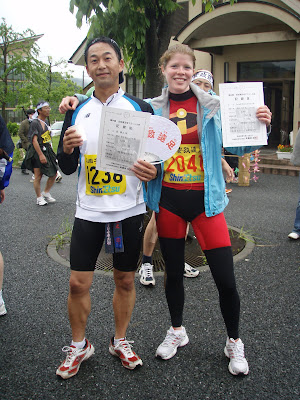 The Top Three: "Brandon", me, and "Ryan", after being interviewed by a newspaper reporter. 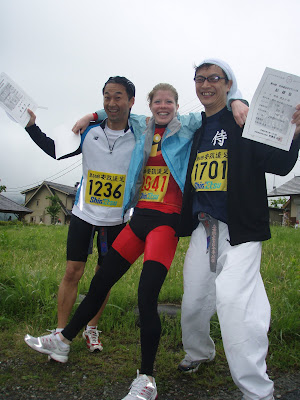 The girls, on the way to the onsen, after being all tuckered out from a 20km run (me and Tomomi) or eating breakfast (Kristine, Laurel, Brooke). 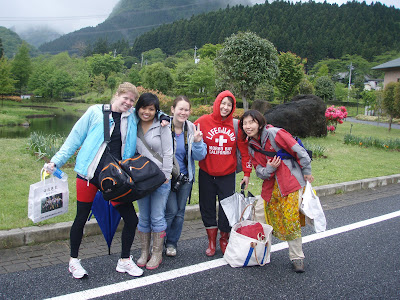 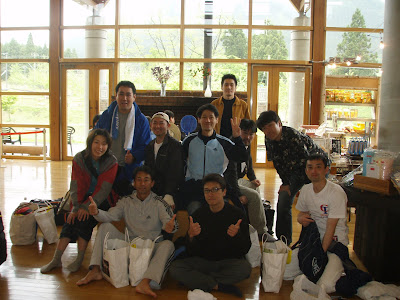 I had a really great time and am so grateful Takahashi #1 (Hiro) arranged this all and invited us in the first place. It was a total blast, and proved to me that I could actually run a 1/2 marathon. Makes me wonder if a full marathon can happen sometime in the future for me???
Posted by Sarah M at 11:50 PM