On May 6th, 2008 Jenny left me. But not before I could show her one last good night out in my hometown of Maebashi. For dinner, I got the whole crew together at one our favorite izakayas.

Terry and Jenny as the first course comes out. 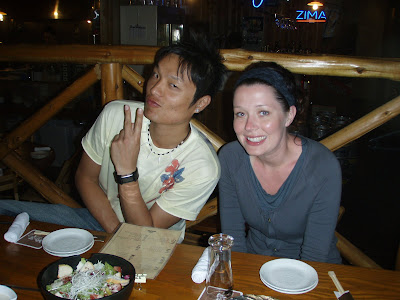 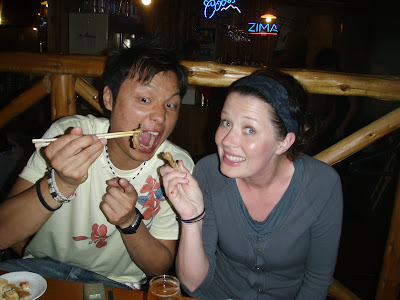 Happy Cinco De Mayo, everyone!
The only group shot we could muster up after nomihodai:
(From the left, clockwise)Alex, Ali, Terry, Laurel, Tomomi, me, Masami (hiding), Hiro (Takahashi #1), Takahashi #2 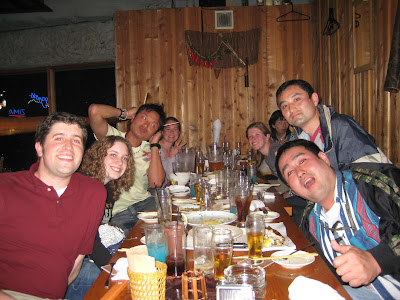 Following dinner, we took a 'lil stroll along the river and those still standing came to karaoke with us. Maybe I really have turned Japanese and have too much of an appreciation and love for karaoke culture, but I was almost offended that Jenny didn't dig it. She wouldn't even sing one song! Granted, karaoke is quite a different event here than in the US. At home karaoke is done in front of a huge crowd of mostly strangers... which in my book, is way more intimidating. You sign up for a song like hours in advance, wait for your turn in the spotlight, and then return to boredom. In Japan, you rent out a room with a group of friends and order drinks during the duration of your stay. You get to sing lots of songs and sing along with each other. You even get a maraca at some places, or a tambourine if you're really lucky! Despite my enthusiasm, Jenny wasn't feeling it and straight out refused to sing even one song. Lame sister, lame. But, to each his own I guess. Nope, still lame. 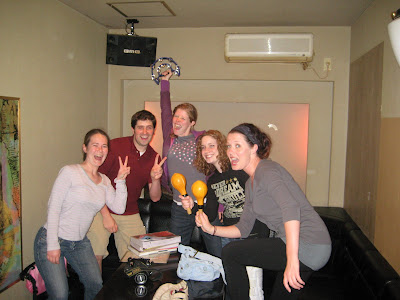 The goodbye the next morning was pretty tough. Probably not for Jenny, because she was definitely done with Japan and ready to get home. But for me, it meant I wouldn't get to see my sister for over a year. I really appreciated the time we got to spend together. Yes, all of it. We'd never spent that much consecutive time together, and although it drove her pretty nuts I'm sure, I think she had a good time overall. I was really happy to have experienced so many new and great sights in Japan with her and learned more about Jenny and myself throughout the trip. While we were both relieved to be finished living out of a bag, I was pretty sad to be leaving family. Luckily, I knew that my Mom, Dad, and brother would be coming in less than 2 months - which probably prevented me from having a total breakdown right there and then.
I love you sister, and will cherish the memories we made together for the rest of our lives. Miss you already! 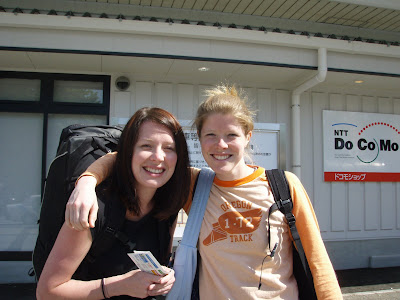