I've got a keen eye and ear for finding out about festivals and events. In fact, I pretty actively search for things to do around this lil town of ours and convince others to come with me. The problem with not being able to speak or read Japanese is that sometimes, the information in English is not exactly thorough or complete. Such was the case on May 18th, when we planned on heading to the Takasaki Residents' Festival. Long story short, the directions to the location of the festival were unclear/non-existent and failed to mention that it would take a 30 min bus ride (after waiting over 2 hours for one of the three daily buses for that route to come) and 45 minutes of walking, uphill to the festival. Annoying for anyone but ridiculous for our friend Ali, who was on crutches at the time. She was a total trooper though.
On top of that, the thing we were most excited about were the hot air balloons and the opportunity to ride in one for super cheap. This picture below shows the only hot air balloon we saw that day. It was deflated by the time we got there. 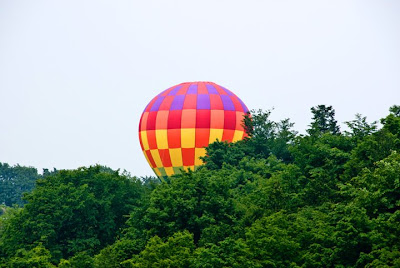 But, we did eventually make it to the park and were ready to enjoy whatever they had left. 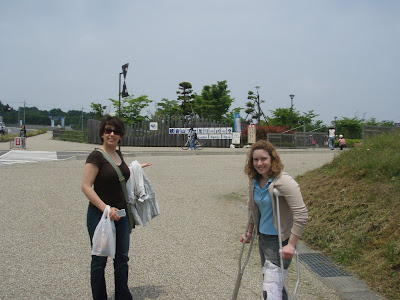 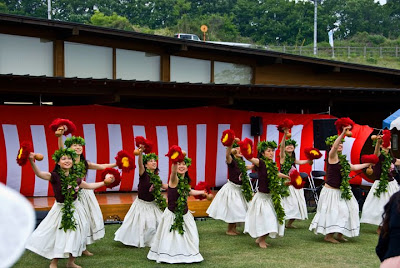 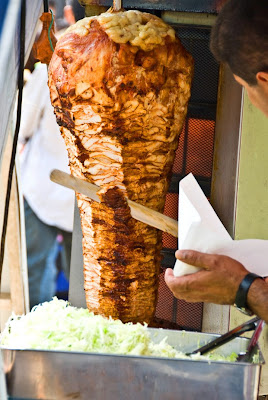 And mini automotives with big and little people riding on them. 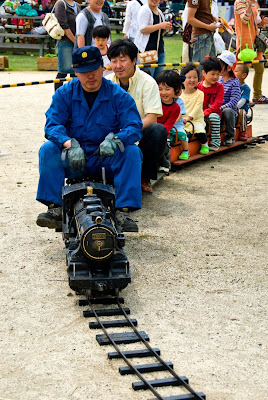 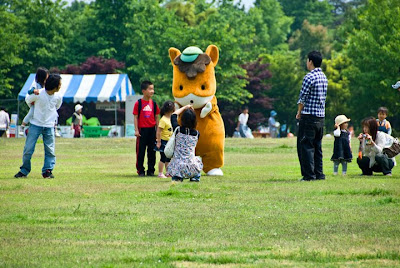 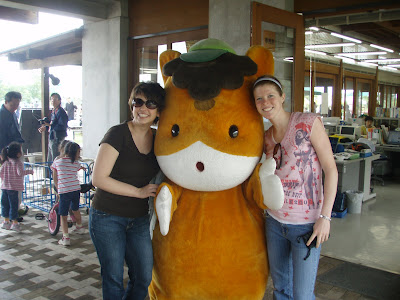 There was also a crazy lookin' little "marching" band walking around the grounds playing the same song over, and over, and over again. They were fun... for like the first 10 minutes. 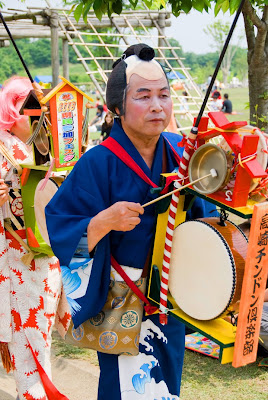 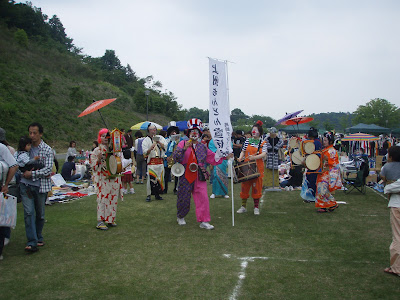 There was also a flea market at this festival, which was weird, but I LOVED it! I managed to get a few ridiculous items I'm saving up for jussssssssst the right time to wear. I'm also waiting for the stench on some of the things to go away. 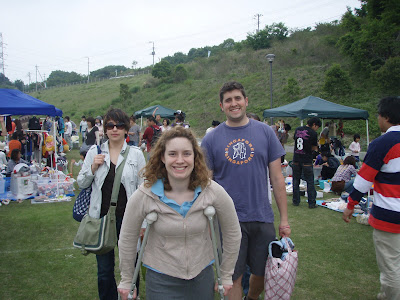 By far the coolest item at the market was this little robot. It keeps canned drinks cold and then delivers and hands it to you. It was pretty pricey though, and definitely wouldn't survive a commute on my bike. It was tempting though, very tempting. 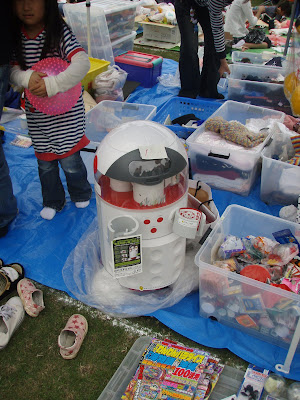 Water bottle rockets being set off. 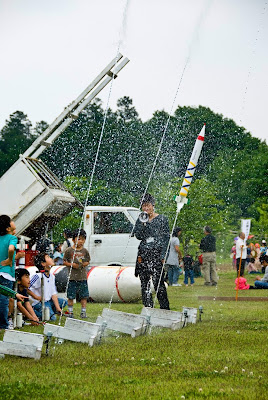 I've decided that clowns are AS creepy, if not more so, in Japan. Sure, she's smiling, and has hearts on her and blows up balloons for kids, but "Pink" here had a devious twinkle in her eyes that I for one did not trust. 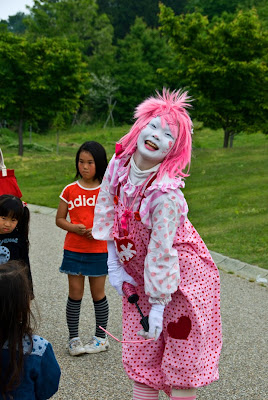 The festival was located within the Family Park grounds, so there was also these water fountains and those jumping bubbles in the background. 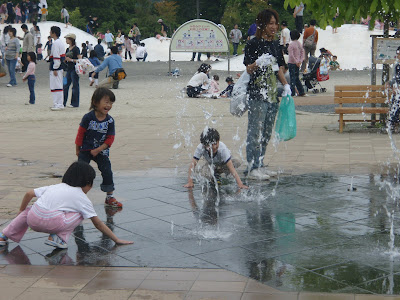 Before you can go on the jumping bubbles though, please remember not to bring your school bags onto it, do acrobatics, or kick somebody with poo on the bottom of your shoe. 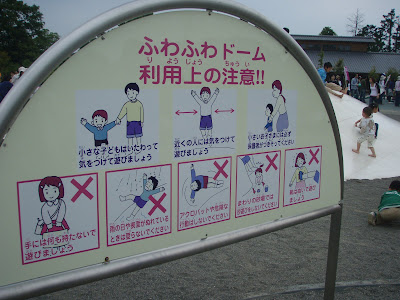 The jumping bubbles!!! Seriously SO fun. I don't know what it is about jumping on bouncy things, but it makes me so giddy! 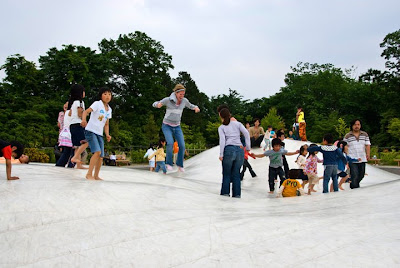 It makes Laurel want to chase and stomp on small children. 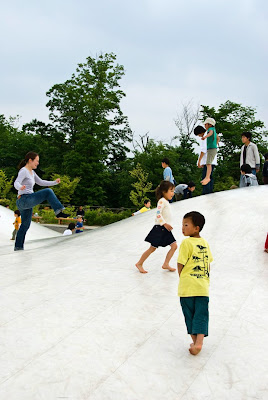 Just kiddin' - it makes her super smiley as well. 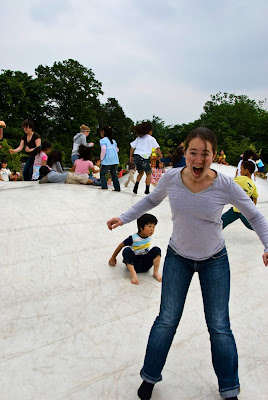 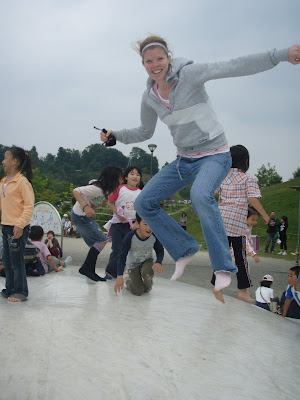 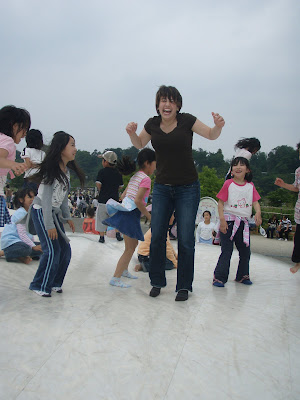 Half the fun was being surrounded by a gajillion and one kids screaming "Hellllloooo!!!" 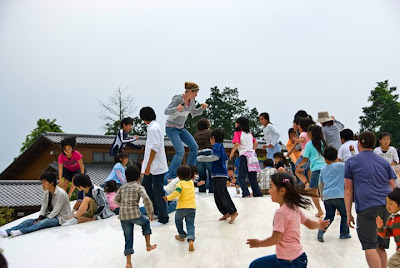 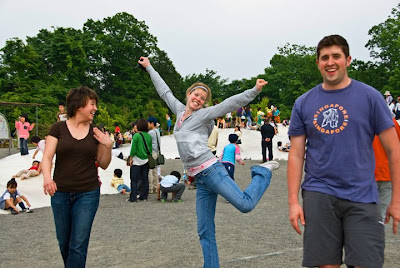