After my first hike at Shiga-san in Gunma, I was hooked! The autumn colors, the perfect weather, the casual strolls and the uphill climbs to feel the burn. The following weekend I was planning a trip to Tokyo for some Halloween shopping - until some friends mentioned a "little" hike they were doing at Tanagawa-dake. I had never heard of it, and was jonesin' for more. Plus, I knew the autumn colors were like, magical - you see 'em one day and they're gone the next. I was intrigued and would choose an outdoors adrenaline rush over city commercialism any day. I had no idea what I was getting myself into.

October 22nd, 2007: It was another early mornin' rise. 5:30am wake up get to the station by 7am to get picked up and then drive to Minikami, where the mountain is. We got there on schedule and the day looked fannnntastic. Blue skies, great temperature. Everyone else thought it was a great day too - the place was packed! Anyway, we took this here gondolla up to the starting point for the trail. 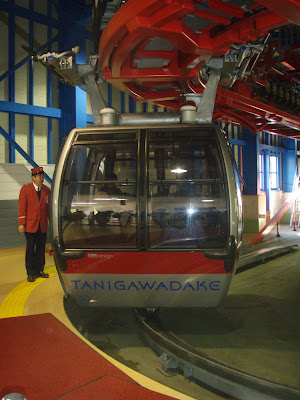 Before actually hiking, we had to get our one (and our only) group pic. I asked a Japanese guy to take it... well, I actually kind of handed him the camera while saying "please" and "thank you, thank you!" in Japanese and motioning to 'take a picture'. He did, with his finger in front, and then he gave it back to me really hesitantly and called me "suspicious" in Japanese. Luckily I had four fluent Japanese speakers with me to relay the insult. 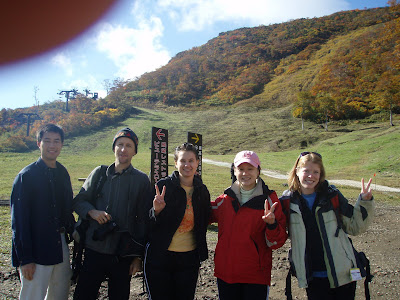 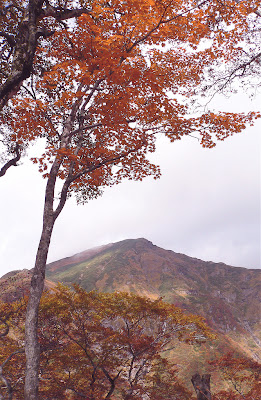 I started to get a little disappointed as the path started off all flat, like this. Wasn't there a mountain we were climbing? 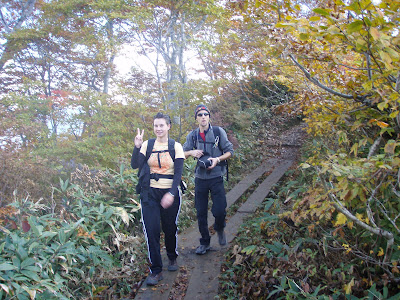 But, there were beautiful leaves to look at. 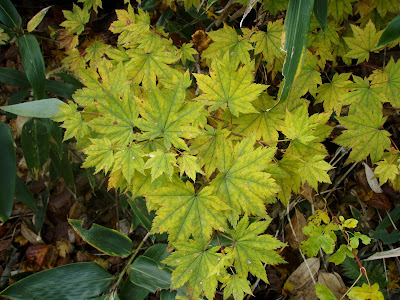 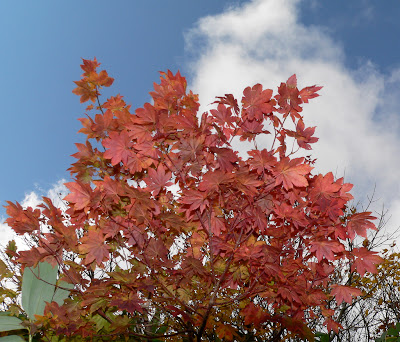 Eventually we started making our way up that mountain. Here's a better view of the surroundings. 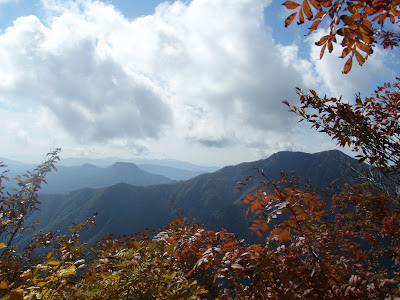 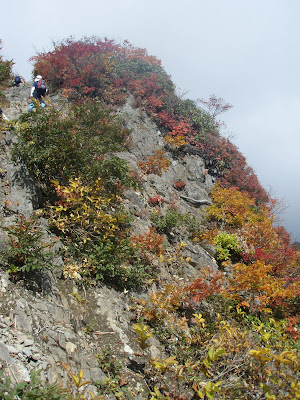 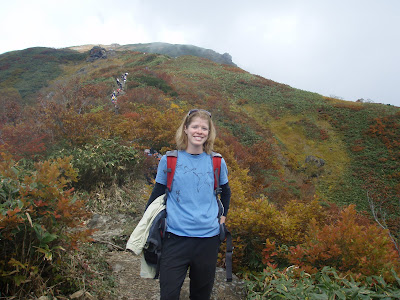 Looking back at my putzy crew making their way up. C'mon, guys! You can doooo it! 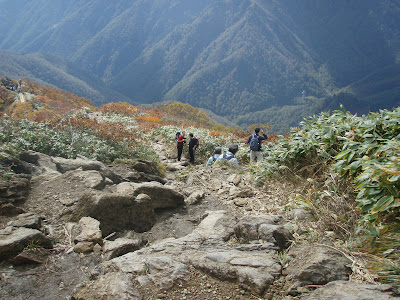 A cool resting spot. Classic too, with the Japanese dude taking a picture with his ketai (cell phone). 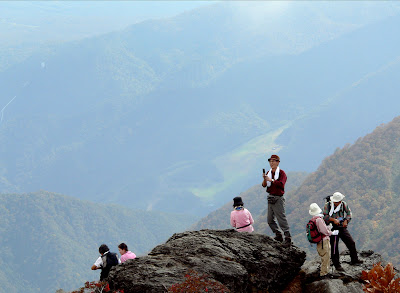 I was absolutely amazed at how diverse the terrain was. By this point, we had already gone through a forest with tall trees and flat plateaus, gone up rocky but stable cliffs with sparse trees, and steep mountains with lower shrubs. Then there was this crazy like fingerling bushy face of the mountain! 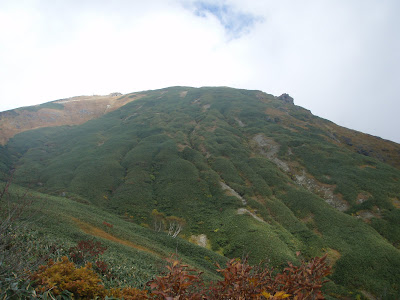 Okay, so imagine it's all nice and I'm hikin', gettin' the heart rate up, and enjoying the sun on my face, and I'm leading the pack, and I look back to see this: 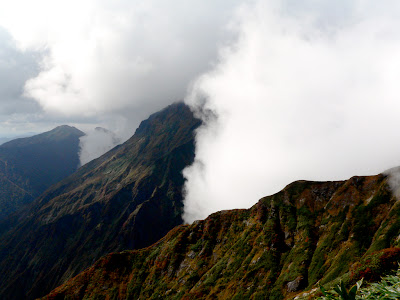 Within literally a minute, I hit a peak and it was instantly misty and 20 degrees cooler. Judith and Bahia don't look too pumped about this change. I thought it was pretty sweet! I felt like I was in a mystical land atop a mountain in Japan or something! 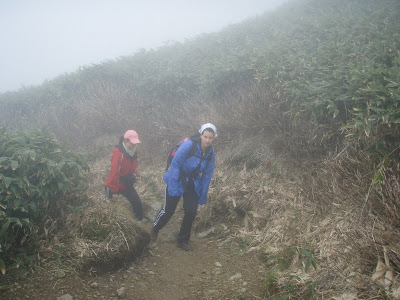 We reached the first of three peaks! Woo-hoo!!! Or ya-hoo!!! in Japanese. As you can see, we were at 1963 meters. Check out the video at the end of the blog to see a pan of the view from this peak.
This was about 4 hours into the hike. After this point, the majority of people turned back around. Actually, the majority of the people that took the gondola up took another ski lift up to a peak to view the foliage. Maybe half of the people on the gondola made the hike to here, and probably 10% of those continued on to the next two peaks. We thought this was about half way point... we were wrong. 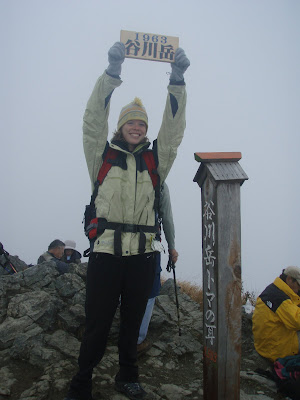 I'm thinking a fall down the side probably wouldn't be the most fun experience. 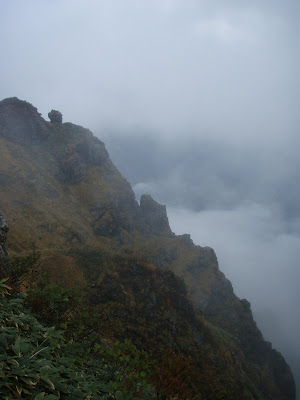 Hands down my favorite picture from the hike. This is us on the ridgeline. If you look in the far distance, there's a torii ('gate'). Bizarre to see one in such a remote location, but since walking through a torii is meant to make someone aware that they are entering a sacred area, I thought it was quite appropriate. The hike just kept getting better and better. The terrain was carazy and unique and beautiful at each turn. 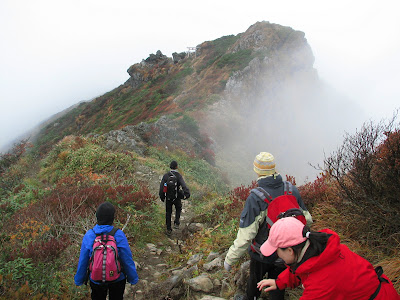 Apparently you can't eat these berries, but I couldn't help but want to because they were sooo perty! 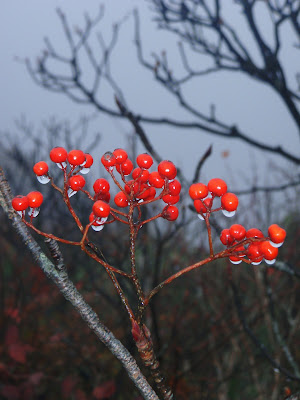 Time was a tickin' and we weren't exactly sure how much longer we had to go to get to the final destination of the train station on the other side. We were hiking from one prefecture (Gunma) to the next (Niigata). We were too far along to turn back, so we kept going. I was loving it! The terrain rocked and I wasn't the least bit tired. Yes, those are metal chains to get down the mountain. 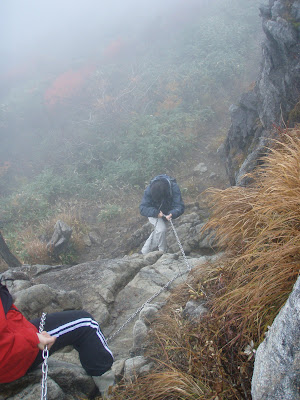 Then we hit the "sprain your ankle" terrain. After joking about how dangerous this vast shale rock field was, Bahia totally twisted her ankle. Luckily Judith had a brace prepared for the situation. Still, it slowed us down a bit. 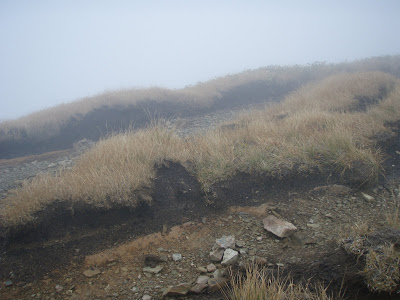 That's when you know it's time to pull out an 'emergency' onigiri (rice ball) to cheer you up! Mmmm. 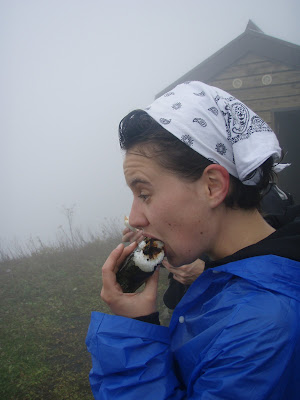 I'm pretty easy going and trusted that our guide, Kurtis knew where we were going and had planned out the timing for the trek right. There was only one path, and we stayed on it the whole time, so it wasn't a big deal to me where exactly we were on the trail. The other ladies' however asked approximately 274 times "are we there yet?" Kurtis' directions for the hike said that after the third peak we'd make it to a forest. Look, we made it! And, the trees were amazing - even through the misty fog... that turned into rain about 5 minutes after this. The rain wasn't a highlight of the hike. Could've done without that... for sure. 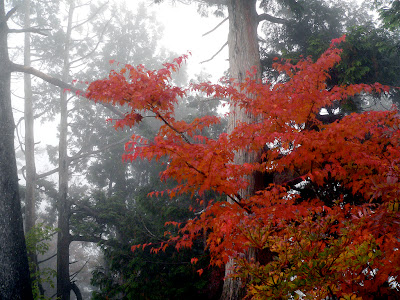 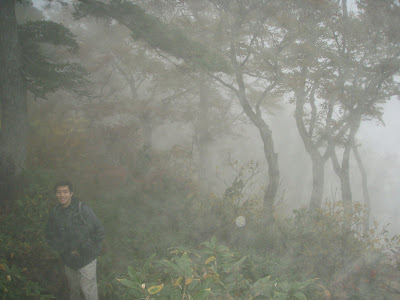 Hmmm, where's the sun and how much daylight do we have left? 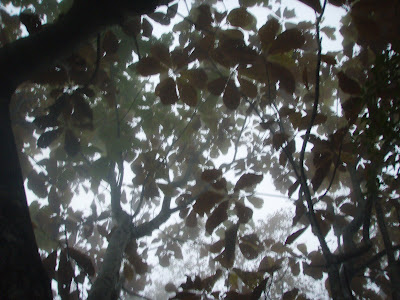 Video Pan from the top of the First Peak on Mt. Tanagawa


Turns out it took longer than Kurtis' had anticipated. The sun set while it was raining and we were still making our way down the mountain. We came prepared with flashlights, but the lack of light, wetness, mud and the leaves on the ground made it pretty scary to get down. On top of that, the train was leaving the station at 6:30, which when you don't know exactly how far going, means you gotta go fast! Kurtis and I ended up leading, going ahead of the other 3 in an attempt to make the train and then drive back to pick up the others. Despite our sprints through the marshland, up and around dams and over several bridges (the same ones more than once), we missed it.
Luckily there was a taxi service out in the middle of Niigata. Unfortunately, it was a $200 cab ride back. Luckily the garage was still open on the first floor to get into the structure where we parked. Unfortunately the gate we were on on the 4th floor was locked. Luckily Chris has Japanese sweet talking skills and woke up somebody sleeping in the lobby (they guy was apparently starting really early the next day on the hike... note to self for next time) to help.

19 km and 11 hours of hiking, a 30 minute cab ride, a 10 minute gondalla ride, and two 1 1/2 hour car rides later - I was beat! That hike was hands down the coolest and most physically demanding hike I've ever been on. It was literally painful to walk for the next three days and I couldn't run for over a week. It was intense, but I was so proud of us all for getting through it. What an amazing experience:) I hear Mt. Miyogi is double the intensity of Tanagawa. Guess where I'm going next fall?
Posted by Sarah M at 6:46 AM

Hello Sarah,
The photos and video of the mountain hike and the street festival are wonderful. We love the photos but the videos are really NICE! You are very blessed to have found such good friends that can travel with you to see all of the beautiful things Japan has to offer. It makes it even better when they can speak the language. It does come in handy when little problems arise. We look forward to reading your next entry.

Sarah,
We can't keep up with your blog! We love hearing and seeing your adventures unfold! How wonderful and lucky you are! Happy Thanksgiving from all of us to you..can't wait to see and read more of your adventures! Love, Auntie Ginnie and family