So I know I've posted about several festivals on the blog, but the time has come to represent my stomping grounds: Maebashi! On October 14th, some friends and I thought we'd swing by to see what it was all about. There was also a less promoted and attended Environmental Fest going on, but I show some highlights from that as well. Regardless, our efforts to "swing by and grab some food" resulted in a full day festival extravaganza that I loved!
You can tell that it was a pretty big deal by the picture below showing a dashi (float) going down the middle of a major highway. The weird part was there was no police escort or road cones or anything... just this float and 30 Japanese walking along side it to get to start of the parade route. 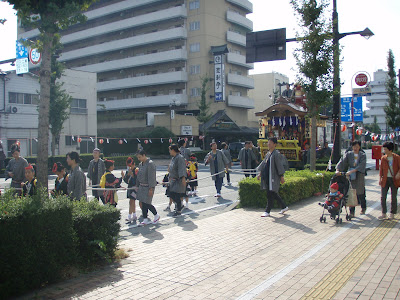 So, what exactly does a festival in Japan consist of?
First, there are heaps of people. I swear every weekday and night after sunset there's not a soul that exists in this city. It's bizarre, because it's the capital and has one of the largest populations, but the streets are seriously baren past dusk. Not the case for the festival. It was Saturday and Sunday and people packed into every street and corner the fest was on (which was the entire city center). I saw about half my students too... I could tell it was them when the stared, blushed and squealed "oohhhh - Sara sensei" to the person nearest them. With all five of us ALT's walking around, there wasn't a block we were on where one of us wasn't recognized. The elementary school kiddos were usually pretty psyched to see us - but our friends that teach high school had less enthusiastic responses to their teachers being out in public.
Next, festivals have FOOD, and heaps of it! I had everything from chocolate covered bananas, to delicious bean filled pancakes shaped as fish, to tornado twisters, Thai ice cream, and my favorite fest food: okonomiyaki (potatoe-esque pancakes with cabbage, veggies, dried fish, bacon, and a fried egg on top)!!!
The chocolate bananas were one of the first things we saw, and who can resist a blue chocolate covered banana? We should've... because it tasted like a blue truck was melted onto a hard banana. I ate it anyway, because I had just payed 2 bucks for a banana. Oh, that's Vi Michelle I'm with - she's a fellow ALT and lives below me in our apartment. I think I am to her what angry married couple was to us on Mills St. The floors are super thin, not insulated and she can hear my every move - creepy and annoying (more so for her). 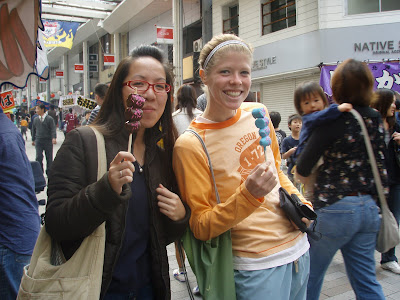 We passed like 38 more chocolate covered banana stands and they kept getting prettier and more delicious looking. Plus, I could have purchased a multicolored sprinkle banana from this guy, which in itself would've been worth the 2 bucks. Lesson learned: Buying the first chocolate covered bananas you see will inevitably lead to disappointment. 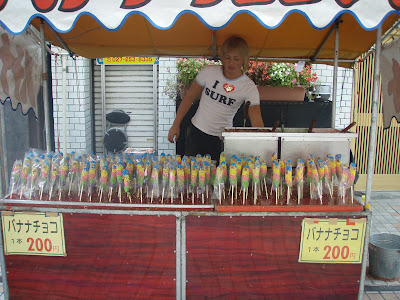 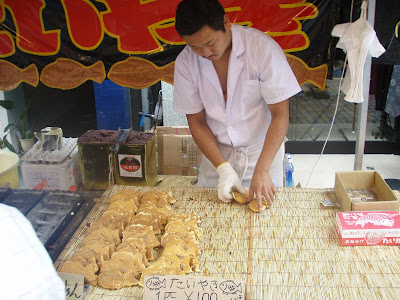 Thai "ice cream": tasty, but a total disapointment as 90% was air. 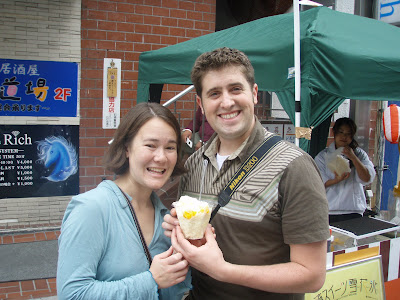 Tornado Potatoes: cripsy potatoes swirled on a stick (amongst several other things on sticks). 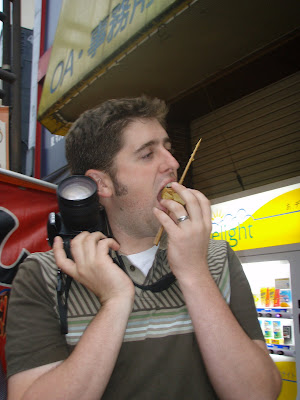 Vi ate "The's Burger" (seriously the name of the stand) which could've been the biggest burger known to mankind (or Japanese-kind at least). 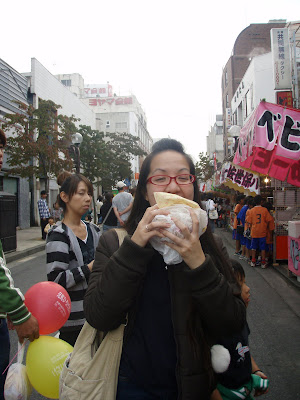 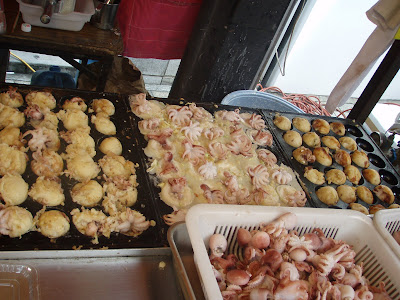 Maebashi festival also had a few side stages with some amazing performances. Check out the videos at the end of this post for some taiko (Japanese drumming) action and a clip of the Japanese version of STOMP!
Festivals also have games! Catch the goldfish... 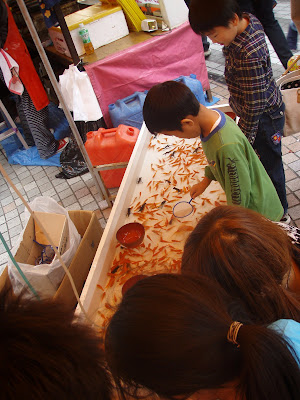 ...or mini turtles? I felt really bad for the all the lil turtles and kinda wanted to play, just to save one of them! Not a one kid (or adult) could get one. 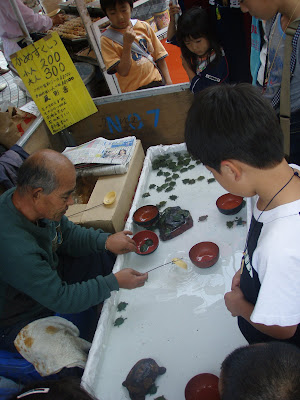 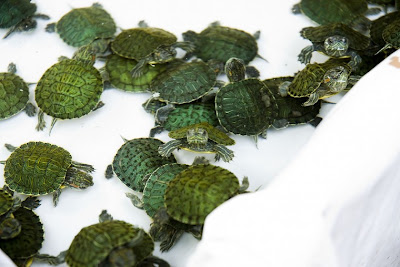 The festival was lacking in the "pop star" poster section though: not one of Steven Tyler. 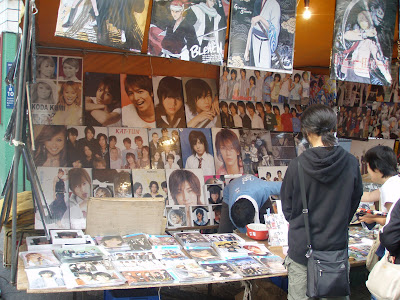 Notice the guy in extremely high "platform" shoes with the hapi (light festival jacket) on. Based on the fact that we've seen him in those kicks at 2 other festivals and on stilts at the international festival - we've concluded that he's got some kind of inferior height complex or extreme anxiety about a flash flood resulting in his shoes getting wet (which actually was the purpose in the first place for the shoes). 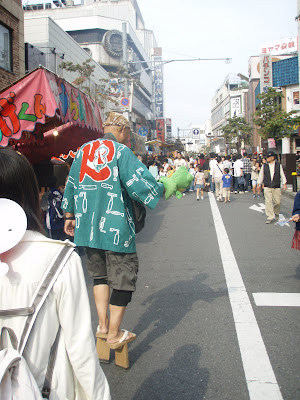 We were still enjoying the fest, but an appearance by G5 persuaded us to leave the main festival for the lesser known Environmental Festival that was going on. We saw a lonesome flyer for G5, the superhero group that uses the 3 R's to fight pollution, and couldn't resist the opportunity to support them and relive our Captain Planet days. It was really fun to shout things in Japanese and have all the kids stare at the late 20 year olds for the first few minutes, but after the lack of EARTH, WIND, or FIRE power, we were done. 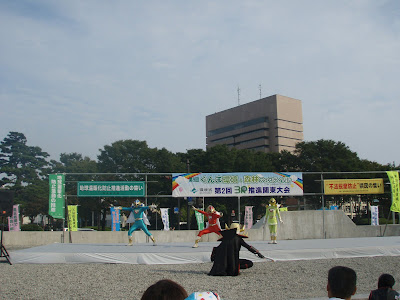 No goldfish or turtle abuse here - but you could make your own recycled wood toy! 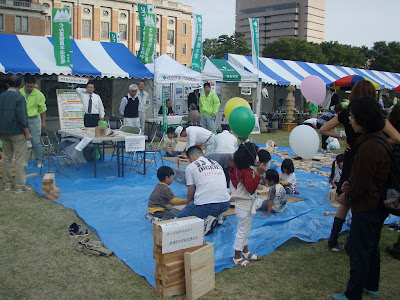 Vi did that, while we took the environmental quiz so we could get free cotton candy and yogurt drinks (both delicious). Of course, the soft serve ice cream had to be the highlight for me at this fest... or was it G5? 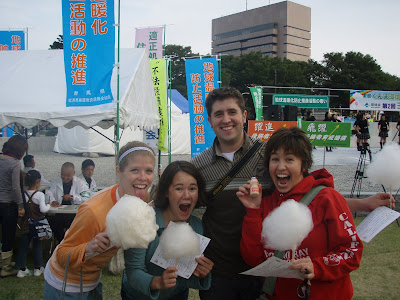 We hadn't had enough of the Maebashi fest and some of Alex's students were in the big parade - so, back we went. We made it just in time to see the parade starting up. This is a dashi (decorated float). I'm not sure exactly how or who makes these, but they're amazing! They're usually accompanied by music and drumming and are slowly taken through the streets. Yes, there's video for this too. See below. 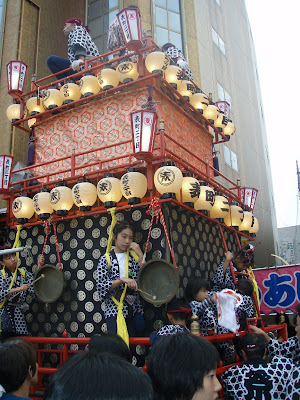 A few of my students helping out. 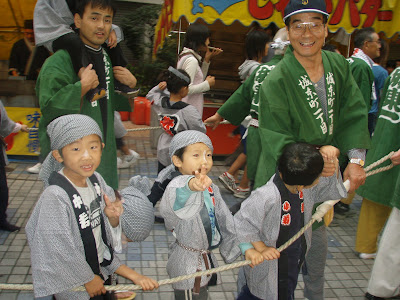 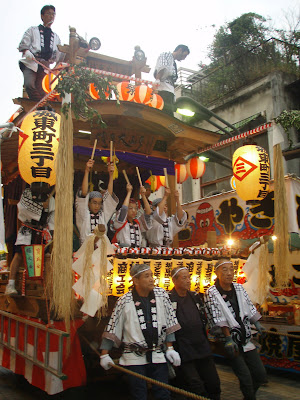 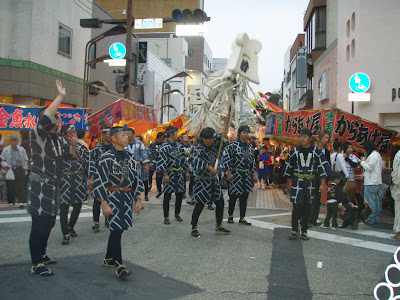 As the sun set (at the ridiculously early time of 5pm), the mikoshi's starting making their way down the streets. A mikoshi is a palanquin which holds the local shrine's kami (Shinto deity) and is carried through the town. It's the only time a year that the kami leaves the shrine. Anywhere from like 30 to 50 people (usually men, but not exclusively) will carry what looks like a ridiculously heavy omikoshi. They chant a cheer that's like, "keep it up!", drink the alcohol provided for them that's following them, and give the omikoshi a good shake every now and then to make sure the God's inside the kami get a good ride and have a good time on their one night out a year. Check out the videos below! 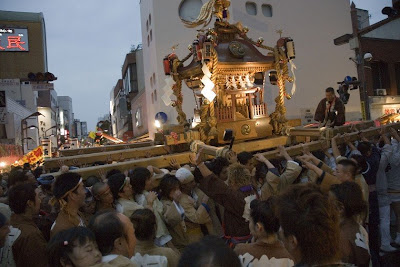 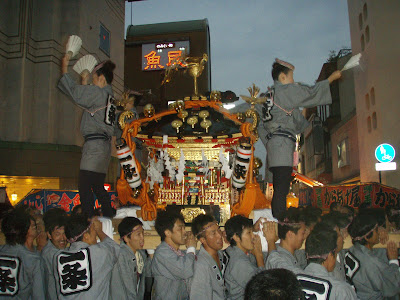 The night just kept getting better... Japanese bee-boppers? They were bustin' out Elvis, so I joined in for a swing. 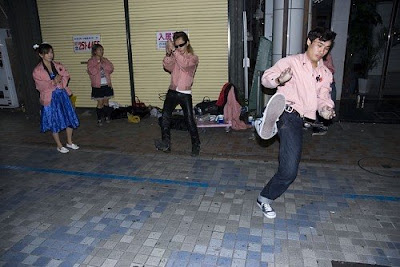 We finally thought we were leaving (for probably the 10th time that day), when we realized we couldn't cross the street, what with the massive choreographed dance going on in the middle of the main drag. Everyone from 3 to 92 year olds were doing this dance. It was nuts! 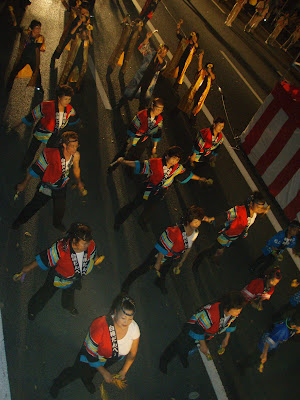 Scan of the Parade

Everybody was Dancin' in the Streetlight