Off to Ikaho for Udon, onsen, and cultural enlightenment

After sweet potato harvesting, Tomomi and Yoshii were kind enough to take us to the nearby famous town of Ikaho. It's the next most famous onsen (hot spring/spa) town, after Kusatsu, in Gunma (where they took us like a month ago). 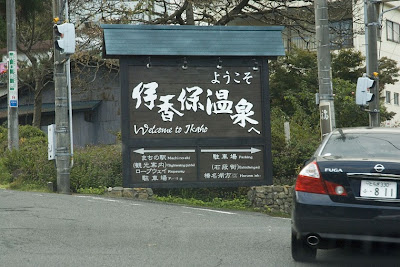 Ikaho is not only famous for it's hot springs, it's also famous for udon (a type of wheat noodle). Udon's a pretty traditional and popular dish throughout Japan and can be eaten in a ton of different ways with a ton of different sides and toppings. However it's done, in my experience, it's delicious. This is a pic of the udon noodles being dried outside after the wheat, water, and salt had been kneaded together, set to rise, and cut into the strips. 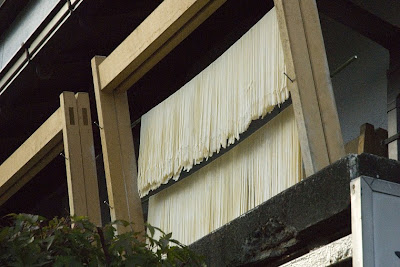 The restaurant had these sweet chairs in the waiting area. I guess they were made by a famous Japanese artist... but I could've sworn they were in the Ladies' Man's room on SNL. Regardless, they're pretty awesome. 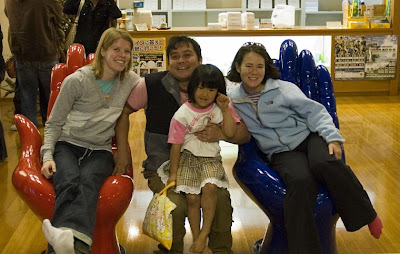 I think Shooma was as hungry as I was, but he had to settle for some green tea until he got to eat. 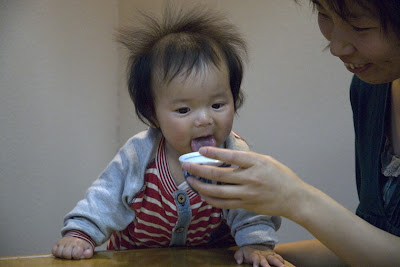 Here's the set I got. The warm udon noodles are in the middle in the triangular dish with some dried seaweed and mushrooms on top. To the left are tempura fried mushrooms and green peppers. You dip those into the soy based sauce to the left. Tomomi is holding the diced spring onions, which are one of the toppings you can add to the dipping sauce for the noodles. The sauce is right in front of the noodles with green tea to the left of that. Then the three dishes to the right are fresh pickled mountain vegetables. I think one was a type of mushroom... not sure what the other two were, but they were tasty! 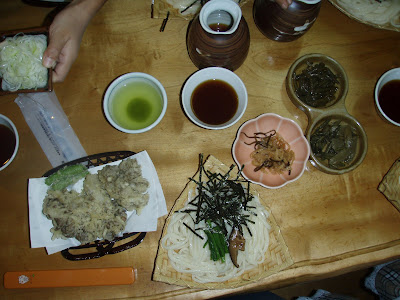 The girls show us how to properly slurp our noodles. 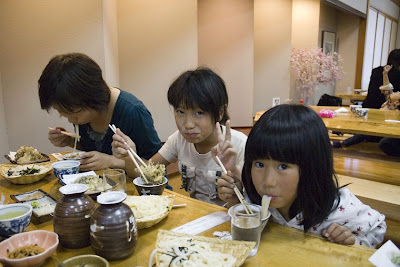 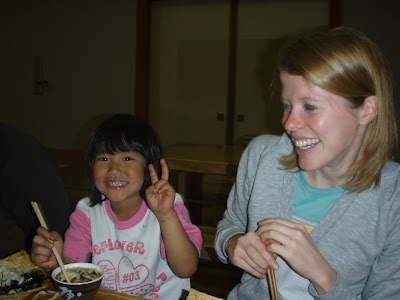 Onto checking out the town of Ikaho. 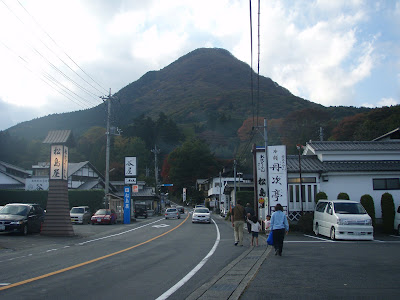 We feel as full and happy as this guy after our big and tasty lunch! 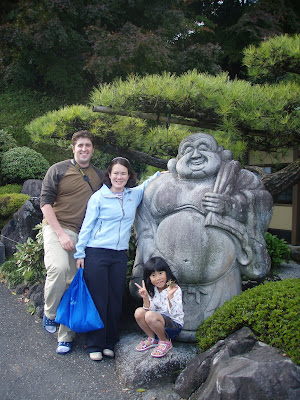 This was an awesome surprise. We got to check out the Mizusawa Kannon Temple. The girls raced up the steps through the Niomon gate... I took a more casual approach. 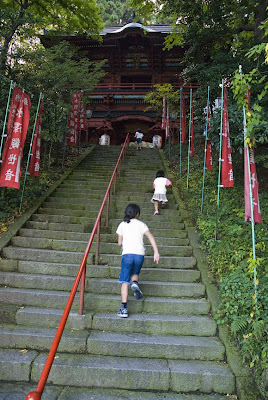 The place was huge and had a shrine, a temple, several statues and this here pagoda. 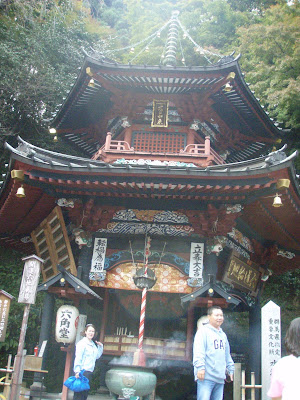 We each hopped in to help give the pagoda a good turn. 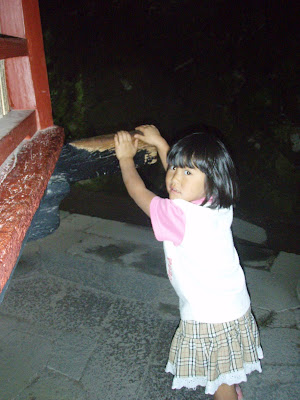 And I cleansed myself by waving the smoke over me. I look confused in the picture because I was. I kept asking if I was doing everything right. Japanese seem to have a very specific way of doing most things, but they're not too upset if a foreigner butchers the ritual, horribly, as I'm sure I do all too often. 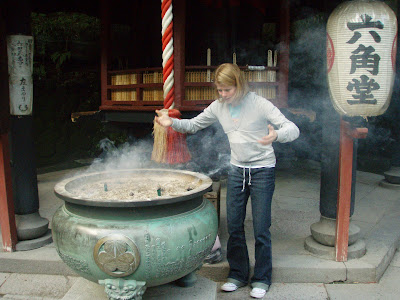 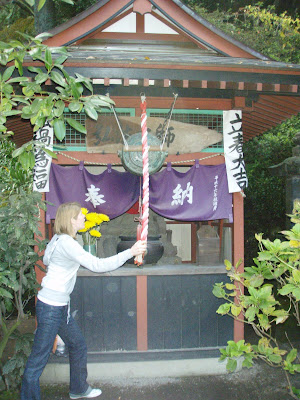 Pouring the fresh water on the frogs for good fortune... I think mine worked:) 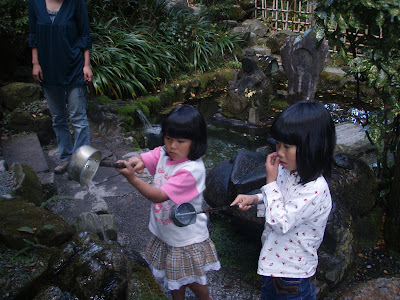 The statues for the gods of each of the 12 periods/animals/years in Chinese astrology. I am apparently the year of the pig which was fortunate for my parents because because of their "fertility and virility" I am meant to be "happy and honest" (http://en.wikipedia.org/wiki/Boar_(zodiac)) . I held up my part of the deal... for the most part;) 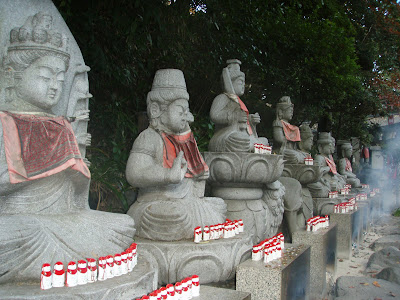 After how much we enjoyed the last onsen (natural hot spring) in Kusatsu, Tomomi thought we'd like to hit up another one. She's so smart! We were pumped because like I said, this is probably the second most famous spa area in the prefecture and you can only get there by car. It was much smaller than the onsen we went to in Kusatsu, and the procedures were a little different. There was no showering area, so after stripping down I was about to get in the onsen, when all the Japanese women in there already started waving their arms and saying "Dame, dame!" (stop, stop). I learned I was supposed to dump water on me from the spa with a wooden bucket first. I apologized like crazy to them, but they just laughed and said it was okay.

Anyway, below are some pictures from Ikaho. 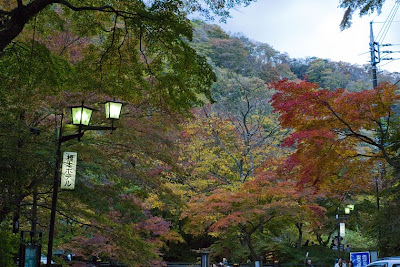 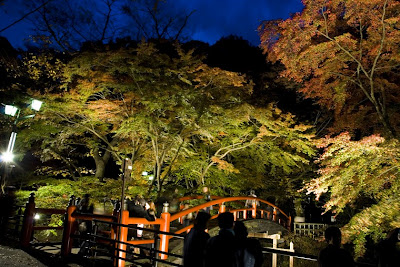 These are the famous steps that lead through the main part of the city up to the Ikaho onsen. We only walked down them:) 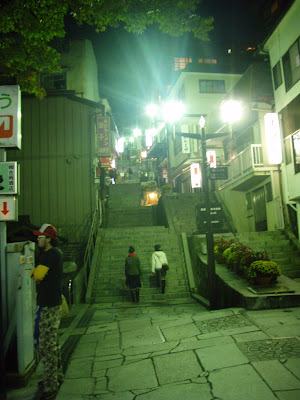