The Fam Does Japan: Nikko

Nikko is another tourist destination city in Japan, but a lot closer to my stomping grounds then the other places we'd been visiting. It's located in the prefecture next to me (Tochigi) and I've been dying to get over there to check out the renown shrines and national parks that boast scenic, mountainous landscapes, waterfalls, lakes, wild monkeys, and hiking trails.

For the history and culture buffs, Toshogu is Nikko's most important attraction. It's arguably Japan's most lavishly decorated shrine complex and is the mausoleum of Tokugawa Ieyasu (Founder of the Tokugawa shogunate). Here are Austin and Dad at the entrance. 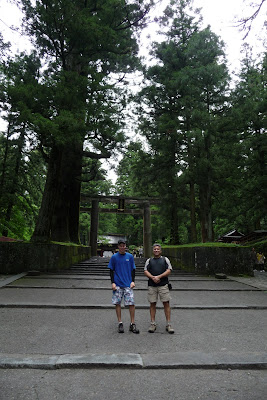 There are over a dozen Shinto and Buddhist buildings within the complex, thanks to Ieyasu's grandson who blew a ton of the common folks money in the first half of the 17th century elaborating on what was intended to be a simple mausoleum. 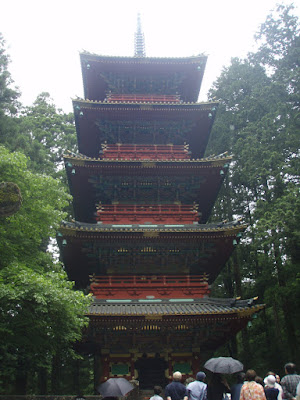 Us, and the infamous icon of Nikko, the three wise monkeys. 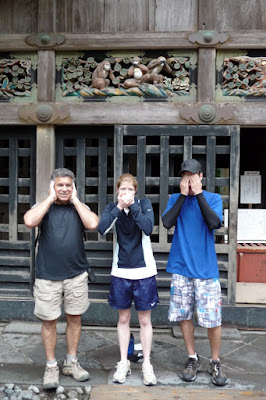 One of the three sacred warehouses. The carving of elephants seen at the top are famous because the main artist had never actually seen an elephant before. Thus, the appropriate title of the "Imaginary Elephant". 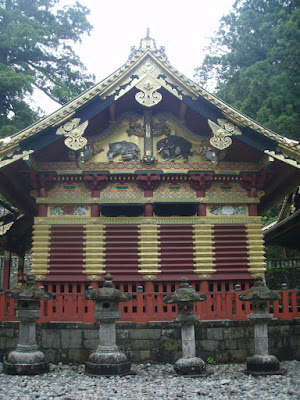 Heading into the Youmeimon Gate (a national treasure). 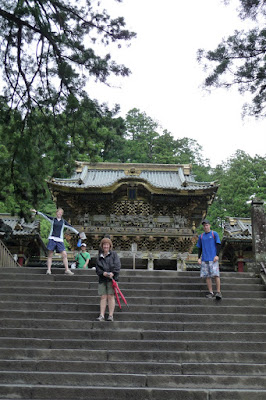 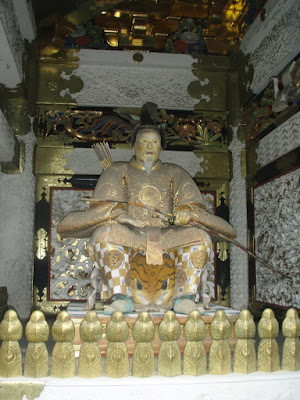 The carving of "The Sleeping Cat". Out of all the things people were most interested in, this seemed to be the area most were stopping and taking 83 pictures of. I don't get it. It's a cat. It's sleeping. The end. 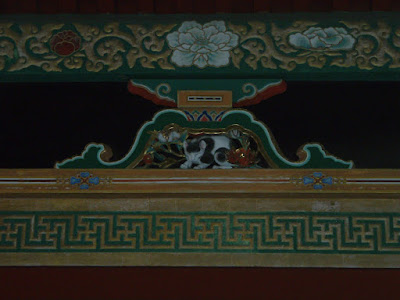 But, after we passed the cat, we could head through to the Okusha Inner Shrine, which was pretty cool. 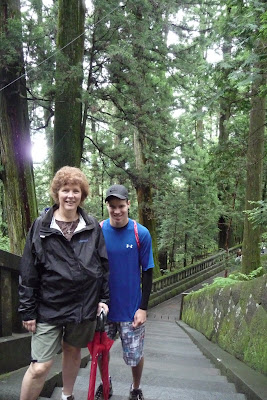 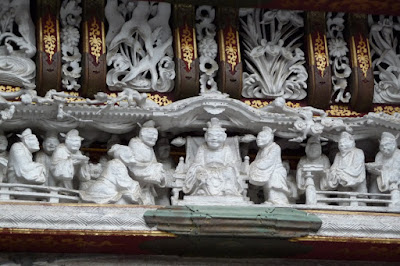 The portable shrines, which only come out once a year to get ROWDY! 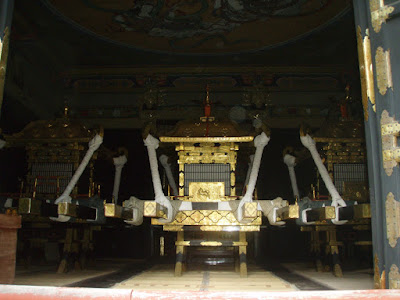 The Shinkyo Sacred Bridge marks the most central area of Nikko. 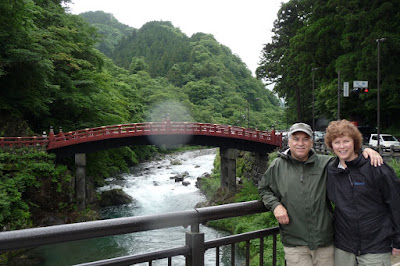 Toshogu Shrine was gorgeous and so uniquely elaborate that I was happy to have gotten here to just see what everyone has been talking about. BUT, I can only do "the shrine thing" so long before I start getting antsy and need my nature fix. SO, we jumped on a bus and drove almost an hour away to check out some waterfalls and lakes. First up was Kegon Falls. Click on the video to enjoy the same amazing view we had upon arrival.
Out of the buses filled with Japanese tourists came the masses, also there for the amazing views. At least we weren't alone! 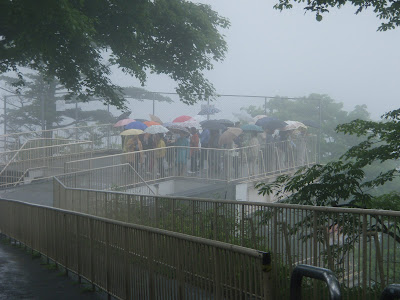 Austin and I checking out Lake Chuzenji. 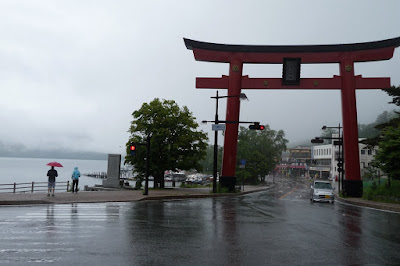 We never could find the actual hiking patch posted on several maps, so we ended up walking along a nice paved road... probably better in the rain anyway. Awww, look at Mom and Dad getting all picturesque:) 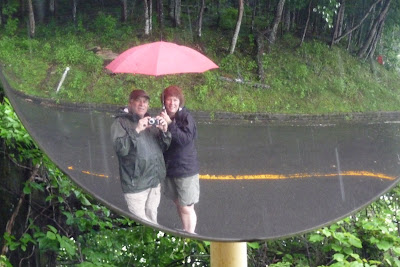 The view of Lake Chuzenji from as high as we got. 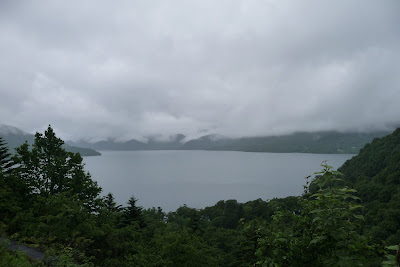 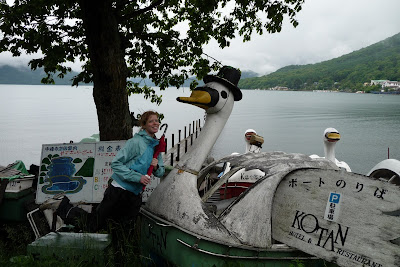 We stopped at Kegon Falls again, just for kicks and did manage to get this view for all of 3.7 seconds. 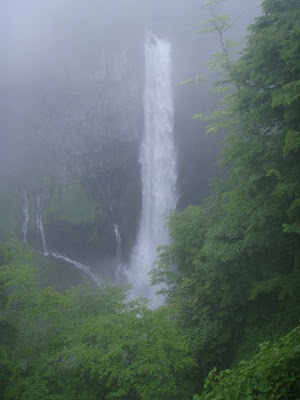 That night, a traditional Japanese meal was served to us in our room (by the same woman that lectured me and Mom for wearing our yukatas incorrectly). I know you're paying for this service and sure, it's nice to have things brought to you, but the being waiting on (and essentially followed) throughout the entire stay was a bit much for me. I can make my own bed, thank you very much! 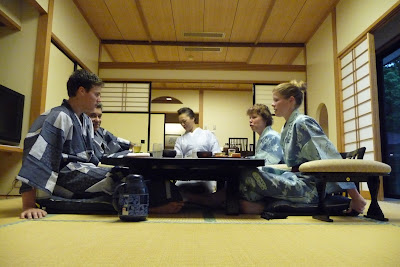 Austin I'm sure didn't mind being serviced whatsoever, BUT his appreciation for the cuisine here was pretty minimal (despite the smile on his face). This was the first course for dinner, all laid out for us after we returned from our onsens. 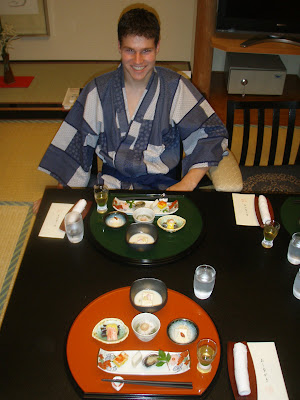 Mom and I enjoying yubatake (a type of flat, rolled tofu). 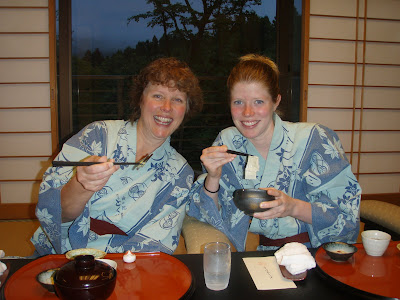 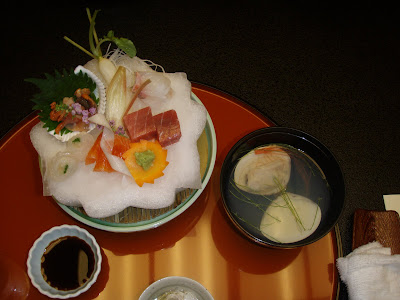 Austin and Dad enjoying the only course they approved of: fried potatoes and beef. 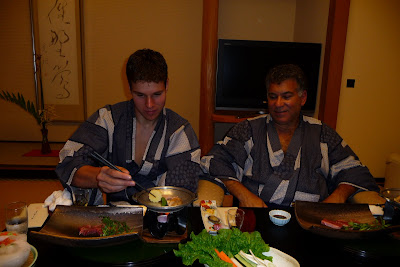 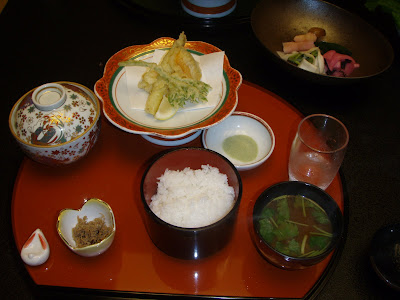 Dessert was a perfectly ripened slice of honeydew melon and cherries. A perfect end to a perfect meal (in my book).
After dinner, we decided to snoop around the ryokan a bit to see if there was anything we missed from our other inspections of the place. We found a room next to the bar which had karaoke. The receptionist was of course immediately at our side to see what we needed. He said we'd have to pay for karaoke, so we said we weren't interested, so he said we could do it for free. I'd say the fam's first karaoke experience was pretty memorable, as there were all of 5 English songs available. We went with "She Loves You" and "Stand By Me", both of which had absolutely ridiculous videos to accompany them. I think the white chick in tight black leather playing pool wins as most ridiculous accompanying video to "Stand By Me". 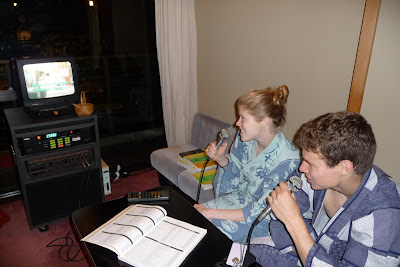 Our last meal at the ryokan was this delicious breakfast: 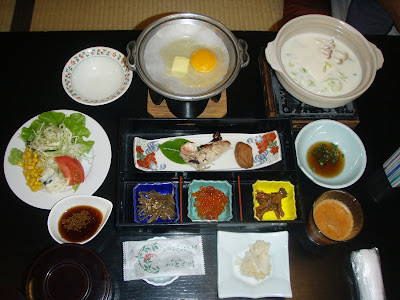 I think this was Austin's first time scrambling eggs - and with chopsticks at that! 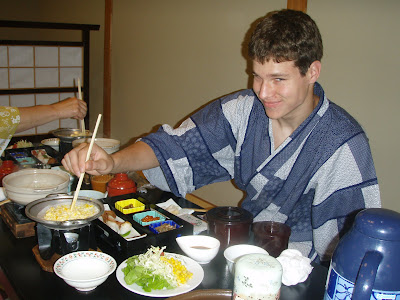 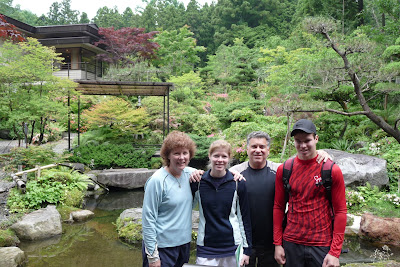