Arrival in Maebashi, time with Host Family, and everything in between

Haha – look at the Japanese people looking at me soooo confused. It’s probably because I scream, “geijin!” (Foreigner) what with the way I’m holding my chopsticks and all… seriously have no idea what I was thinking there… picture jitters or something…I didn’t eat with them like that or anything. Anyway – this was my first experience with udon and tofu in Japan – and man was it delicious! I could never understand the soup in summer thing – but udon and soba can be served cold, and it really hit the spot after walking outside for .2 seconds in the 182 degree heat (temperature approximate based on self-thermometer). 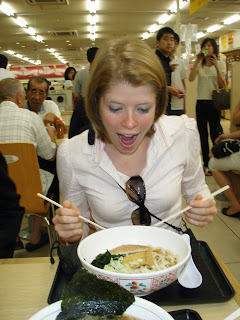 Also, you should know that I was actually really scared before coming to Japan that there wouldn’t be any ice cream and respectively ate 724 containers of Edy’s ice cream in the month before leaving. I don’t even know why I thought that, nobody had told me that… I guess just because I thought cow milk was really rare and I had heard about difficulty obtaining less than 3.7% milk, so I kind of just thought the same was true of ice cream. Anyway, I was clearly wrong as there seems to be a soft serve ice cream vendor on every other corner. It’s no Edy’s, but it was awesome! Kristine had vanilla and green tea twist, I made Chris get the cantaloupe, and I went with strawberry twist so we could all share. Green tea dominates. It’s interesting though, that even though there is soft serve ice cream everywhere (for about $3), there are no regular/large sized containers of ice cream at the grocery store. The ‘largest’ I could find was like those mini-cups you get on field day in elementary school! I was very disappointed:( 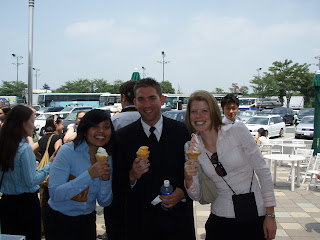 Haruku: What a character. Even though Nani (his mom) couldn`t speak much English, she did manage to tell me how spoiled he is. 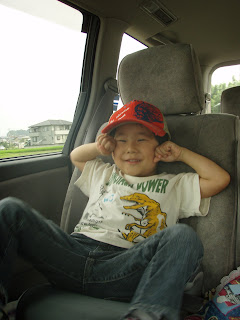 Moe: adorable! She would count to ten, sing the alphabet for me, and yell "GOOD MORNING" to my sleepy face at 7am. Awwwww. 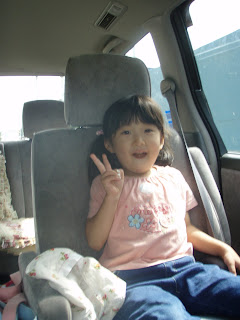 The whole fam, and even Grandma came for din-din! 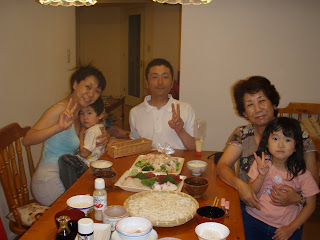 DINNER AT THE FUJI’S
For my last meal at the Fuji’s, we all ate together and Nani and her mom prepared a huge feast. Nani kept asking me while we were out to eat for lunches in food courts what I liked to eat or what I couldn’t eat. I told her I’d eat anything, but I don’t think she believed me because she kept giving me toast, cereal and fruit for breakfast and telling me I could eat at the burger and hot dog place in the mall. They prepared a wonderful meal with miso soup, udon, a salad with all the yummy fixin’s, rice and sashimi (raw fish). There was tuna, salmon, mussels, squid, and octopus (slices of the body and tentacles). They all watched me as I ate each and every thing on the table. I kept getting little oohs and ahhs from them, but the husband literally stopped eating to watch me eat things. He got really excited when I ate the octopus and started talking really fast to Nani – after which she asked me if I’d ever had “nato”. Of course I haven’t, so she went to the fridge and pantries to mix some up for me. Nato is a gooey soybean that she mixed with some soy sauce, dried seaweed, and some other dried flakey stuff. It seriously looks and smells so bad, and everyone just sat staring at me as I ate it – but then I gave the typical response of making the “mmmmmm” sound and rubbing my belly, response that which I had been doing at all meals to let them know I liked it. It actually wasn’t bad at all, other than the slime-like appearance of it. Nani kept telling me how “healthful” it was. Good stuff – and now I can say I’ve eaten Nato, raw octopus and raw squid. Tuna’s still my fave though.
Maebashi, baby!!!
So far, I’m thinking Maebashi is a pretty sweet city. I knew it was about the same size population wise as Madison (over 200,000), but it’s got much more of a city feel than Madison does. The slogan for the city is “Maebashi: The City of water, greenery, and poetry”. There are tons of little rivers running everywhere, and you can constantly hear water underneath you on the sidewalks. One of the bigger rivers, the Mononokai, runs right behind my apartment and has a running/biking path alongside it. I haven’t been running yet because it’s so freakin’ hot – but it should be nice in the fall. It’s really beautiful and when the sky clears up you can get a great view of Mt. Akagi, the biggest mountain in the prefecture. There are also a lot of trees and personal gardens and rice fields, as well as public parks that aren’t so green right now in the heat of the summer. I’m sure it’s much prettier in the spring, which is also when the cherry blossom trees bloom along the rivers.
Houses and apartments are pretty much wall to wall and the sidewalks that aren’t on the main routes have literally 2 feet to ride your bike on. I’ll have to get a picture up of what I really mean with the sidewalks, because I don’t think it’s possible to even imagine what I mean without seeing it. I do love riding my bike though, as it is my only form of transportation. I gotta say too, that I am particularly proud of my map reading abilities and have made out to some dinners with friends, the train station, and the City Hall all by myself! That’s right.
There’s one thing I’ve noticed about bikes and walking that’s really peculiar to me. So, when we were in Australia, it took me like a month to realize that you walk on the left side of the sidewalk – I just kept running into people and wondering why for that month. Here, I just assumed that since you drive on the left, the same rules apply for sides of the sidewalk – not true! It’s pretty much a free for all, and thus, there are a lot of fast jerks to the sides and me saying “sumimasen” (excuse me), even though I’m all like, I wouldn’t have to be excused if we’d just both ride on our respective sides! Interesting, I know.
One of the many "main drags" in the city. 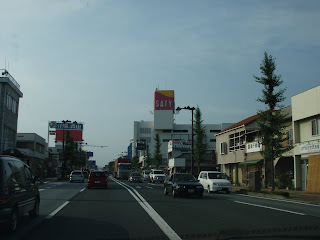 A view outside one of the windows in my apartment. More apartment pics to come when I have all the proper Aerosmith posters properly hung. It’s not quite home without them! 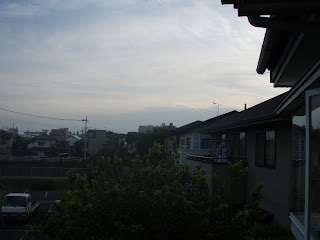 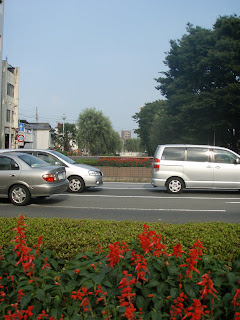 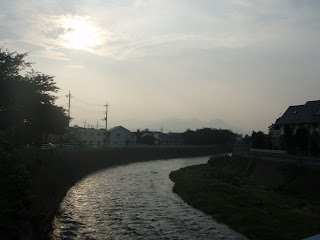 Me and my bike! As you can see – impossible to keep proper posture. What you can’t see: obnoxious squeaking noise, bum back brakes, and front light which causes mad drag when you have to turn it on at night. I have gotten a sweet bell for it and ‘fixed’ the light though… I think there’ll be another trip back to bike shop soon. 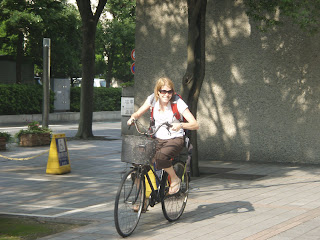 Hey Sarah...Sure looks like you are adjusting well & enjoying your new home (at least home for awhile). I loved seeing the pictures & reading all the details; you should really consider yourself quite lucky as I have never read a BOOK, start to finish, in my lifetime! :)
I wish you nothing but awesome experiences while there, and I have such confidence you will surely live life to the fullest while there!

Hey Buddy! It can be done - I read through your whole blog in one sitting and didn't even finish one full cup of coffee! It sounds like you are having a good time and are experiencing a LOT! Keep up the blogs...Eddie Butts wasn't the same without you :( Love you!
~Steph

Hey Sarah Beara,
Thanks so much for taking the time to update this. It's awesome reading and seeing what you are up to! Looking forward to hearing about your school and teaching experiences. Also waiting patiently to hear from you for real!
Love, Mom
p.s. more on your email

Hey Sarah,
Your Dad and I loved reading your epistle. We are looking forward to your next novel! We are so glad to know that you arrived safely and that you were well taken care of by the JET representatives and your host family. Those two kids are really cute! We loved all of the photos as you know we would and are looking forward to seeing pictures of your apartment. We really want to know how your teaching assignments are going. How does it compare to teaching in the USA? We miss you and continue to offer prayers for you daily.

Love ya lots,
Linda and Dad

I miss you so much. It sounds like everything is going well. I am so excited for you. It looks like your paparazzi skills are working well for you with all those pictures. I had to laugh when you were talking about your host family feeding you american food. Sarah the girl who eats everything. Life in the states is good. Nothing new has happened per usual. I am getting ready to go visit PC then am heading back to school. (and of course looking forward to the camping trip) I met a lot of new people that I will be working with at Ernst & Young and am excited about that. Lots of stories about that, mostly how I hate boys. Anyways I won't keep you reading. You will have to let me know when your winter vacation is so I can start planning!!!