For those of you that didn’t know, I love Wisconsin summers. I was lucky enough to still be around during Summerfest, Bastille Days, and random church festivals; but was pretty bummed I was missing Wisconsin State Fair. Luckily, Gunma does up their festivals right and I’ve had a great time at them all. I was really surprised at how similar Japanese festivals are to US. The streets were lined with little kiosks that sold flavored shaved ice, fried food, food on a stick, and chilled overpriced beverages (sound familiar?). There were games and prizes for the kids and stanky port-o-johns for the big kids. Many men and women dressed up in the traditional outfit called a yukata (like a summer kimono, but more casual).The highlight for all the festivals that I’ve been to have been the amazing fireworks displays. They are so intense. The Takasaki festival had something like 30,000 fireworks shot off. Maebashi Festival was done over the Tone River and had fireworks that were shaped like hearts and smiley faces. Just this last weekend, the Isesaki Festival had an hour and a half straight of fireworks set to coincide with music… kind of like what I imagine Rhythm and Booms to be like. There were even a few English songs in there; What a Wonderful World almost brought a tear to my eye (for real). I also got the opportunity to try the acclaimed fair food. Check out the pics 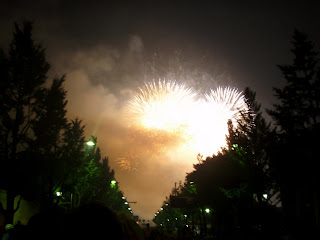 A ton of stands had these massive beetles you could win for the games. I opted for the goldfish game. 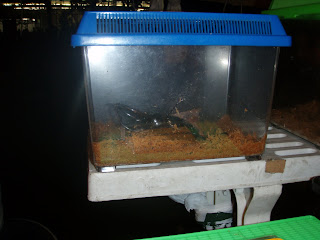 This float was gearin’ up to make it down the street. We also saw a bunch of smaller floats that wouldn’t have people in it, but would have like 20 men carrying it. These ornately painted wooden boxes are portable Buddhist shrines called omikoshi. They’re typically public treasures that date back hundreds of years. 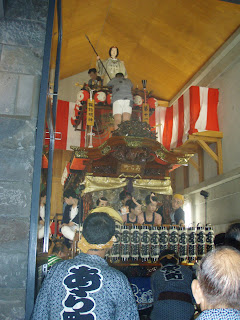 Maebashi Fireworks over the Tone River. 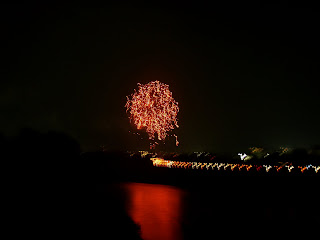 My first okonomiyaki experience! So, okonomiyaki is this sort of Japanese style potato pancake. Just like in the US – you’ve got your basic ‘pancake’ base, and then you throw any kind of toping in you please. Although they were far from my famous banana chocolate chip pancakes – it was just as delicious. Typically it’s got cabbage, spring onions, and some meat in it – but really all is fair game. I’m not really sure, but I think ours had onions, peppers, ham, carrots, and of course the mayo topping drizzled over it to boot. Then you just mix it all up and fry it on both sides. Mmmmm. 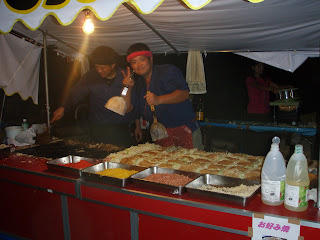 Takoyaki is another big festival and really, everyday food. It’s a type of potato dumpling. The process goes: pour the basic batter, mix in the octopus, cook ‘em up on one half, use intense chef skills to separate and flip over dumplings with two mini spear thingys, make sure other side is cooked, put on 3 to a stick and use what looks like a paint brush to baste with soy sauce. This was probably the most disappointing food so far. Really bland taste and totally creepy texture. 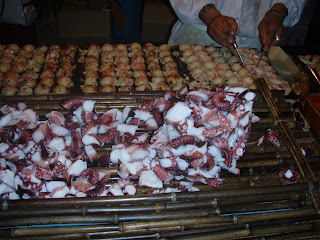 And we’re ready for our Japanese festival feast – complete with a side of fried chicken on a stick for good measure. 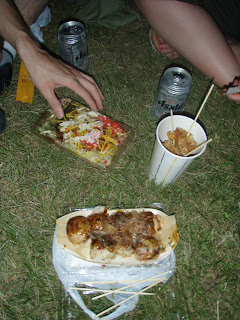 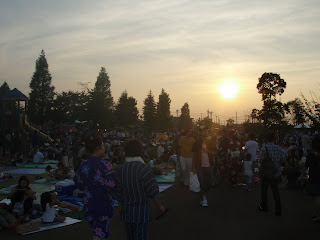 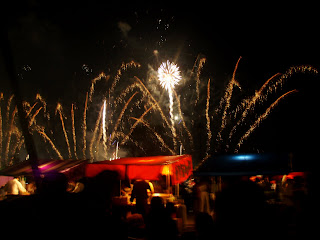 A clip of the fireworks from the first festival we went to literally a week after arriving in Japan: Takasaki Festival!

Ms. Sarah,
Sounds like you are sure enjoying JAPAN! Thanks for keeping us in your thoughts. I wanted to thank you for the AWESOME Madison shirt for Maddison! I will get a picture of it soon and post it one our page.

Thinking of you and hope all continues to go well.