School’s Out for the Summer… but I’m a workin

Disclaimer: Please feel free to completely skip over this blog if you have no interest in the differences between the educational system in Japan vs. the U.S./Wisconsin (or, my perceptions of both). I will not be offended in the least, as I can sympathize with the likes of ya that went through school once and don’t ever want to talk or hear about it again. For those that do care, read on my friends:

I’ll be working with three schools during my time here in Japan. One junior high school and two elementary schools. The junior high school is my “base school” and where I’ll be spending most of my time. I have met few people who speak “fluent English”, but the two I have met are teachers here. One is an English teacher, the other the Vice Principal. There are two English teachers I’ll be working with, but only one is fluent. I have already designed and created one killer English board, if I do say so myself. It’s all about me, so you know it’s got to be good. Many teachers were oooohing and ahhhing, which I take to be a good sign, but they could also be ooohhss and ahhhhs of disgust for all I know.

I also had my first work with students as I edited their entries for a speech competition that’s in October. My cooperating teacher and I picked a day to give the edited versions back and a day when they will present them, after which we’ll pick one student to compete in the finals. The students both came to me with questions regarding the editing. I tried very hard to explain, but more so to question their intent of the sentences, as they were clearly translated word for word via internet, but it seemed to be fruitless and we ended up just cutting the misunderstood sections. It will be cool to practice with them individually as it gets closer to the competition – but that interaction got me a little nervous about working with students. Feedback - even if it's awkward or harsh - is better than blank stares in my book. I’m pretty sure students aren’t going to answer or interact with me for the first month, but I have to remember how shy most students will be and keep up that enthusiasm, encouraging them to talk it up!

During the summer, teachers all come in on a regular basis from 8:15- 5ish pm. I stayed until 6pm a few nights (teachers’ lounge is air-conditioned and has internet!!!), and there were still about half the teachers in the office. Dedicated? Workaholics? Unhealthy? Verdict: unclear. Many teachers, in addition to working on class materials, also coach a club (sports, music, or art).There always seems to be endless work to be done. In the morning, everyone joyfully proclaims “Ohayo Gozaimasu” (good morning), and there is much chatter and movement. Eventually it tones down, but the mornings are super happy and social. I really like the idea of a communal work atmosphere. It kind of holds you accountable for getting stuff done, but I also think it could be really distracting. The office is on the first floor which overlooks the tennis courts and gym. Students often come in to chat with teachers and meetings with the principal are held at a little table in the room too.

When I first came in, we all sat at the table together and “chatted” (aka, smiled and nodded) over tea (I haven’t gotten into tea, or coffee for that matter, yet). Meeting my principals and co-workers at my schools have been quite possibly the most awkward experience of my life – namely due to the lack of language capabilities on both parts. After asking one of the principals at the elementary school whether any of the teachers speak English, he laughed and said, “No no. Is big joke here!” Reallllllllllll funny joke guys.

Anyway, despite many past JETs saying "you’re going to be so bored and not know what to do during this time" – I’ve been keeping very busy. In addition to the English… scratch that – KILLER ENGLISH BOARD, I’ve been cleaning, organizing, and making a few scrapbooks and worksheets for the students. I also went and practiced with the basketball club. They did a cheer for me upon entering – again, super awkward, but playing with them felt so natural and great. Probably the first time there was no communication breakdown thus far. It ensures me of the importance in this type of activity – for us both!

Okay, one last thing, I swear! Notice that "hobbies" is a category I highlight here. Many people have asked me what my hobbies are. At first, I really wanted to see yo-yo ing and long walks on the beach... but then I realized hobbies just means interests. I still mention stamp collecting every now and then though, just for fun. 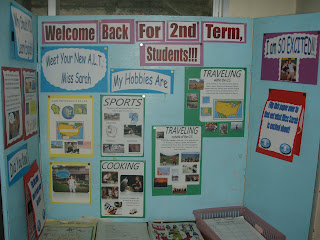 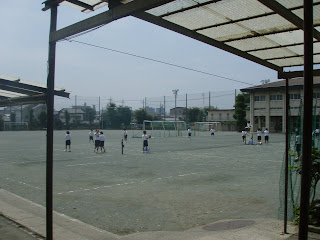 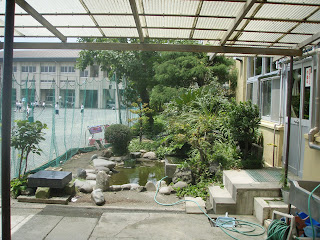 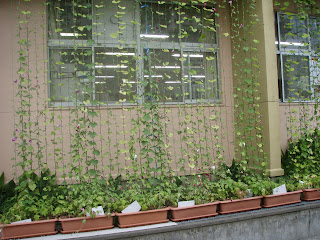 Very cool Sarah! I love what i can see about your AWESOME English board :) Seems like you are adjusting quite well! keep up the blogs, i love them! Much love from Gtown