After talking with Rachel and Mary about their experiences in Spain and France teaching English, it made me feel really grateful I was in the JET Programme. It’s ridiculously organized and they really walk you through the process from pre-departure, through departure, into arrival and post arrival in your Japan location with current and past JET participants with you the whole way through. Without that, I would’ve been much more of a basket case and super nervous about the whole experience, but I think I handled it all quite well (enter pat on the back). It goes without saying that the hardest part was leaving everyone I know (but I’ll say it anyway!).
The Chicago and Tokyo Orientations were both really nice and they fed us heaps, buffet style! I met a ton of interesting people throughout it all, but again, the program does a good job of grouping you together with people in your prefecture (those you live by) – so those I got closest to I’ll hopefully be able to see again! During the days, we had lectures and meetings from 9am-6pm. Some sessions were more informative and entertaining than others, but on jet leg – it was particularly difficult to stay focused. I was one of few who attended all the optional sessions (pat on the back no. 2). One of the nights our Gunma prefecture crew went out for an all-you-can eat/drink style dinner. See pics below.

This was at our JET Orientation in Illinois. 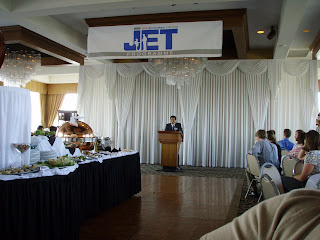 JET Orientation in Tokyo, with about 3,000 representatives from around the world there. There`s another wave (about 2,000 more people) coming in a week. 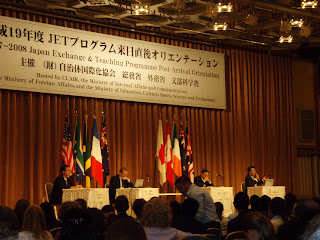 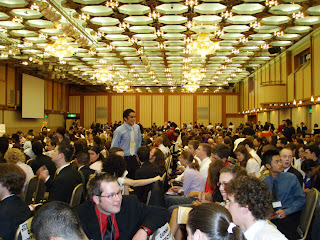 Our hotel was located in the Shinjuku area of Tokyo. Although it definitely had the bright lights and heaps of buildings, it’s known more for its restaurants and shopping than the chaos that is “downtown” Tokyo. I wasn’t daring enough to hitch a train to another area of Tokyo just yet, so some friends and I went out in Shinjuku another night for some amazing food and a run through the arcades. My guitar hero skills payed off on the drum game (which probably has a way cooler name than that!), but I’m blaming my loss on my lack of ability to read Japanese. I was still too beat to rally and go out late night with the karaoke crew, but I only live a few hours away from Tokyo by train, so it shan’t be long ‘til I return and do it right! 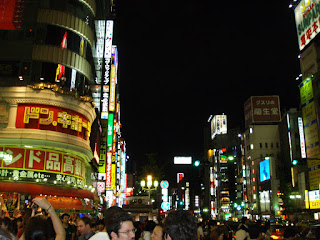 View of Shinjuku area of Tokyo from the top of our amazing hotel. 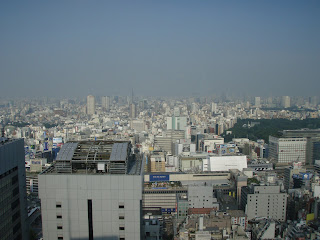 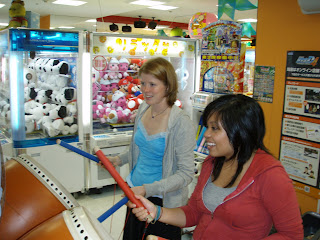 Get ready for a big part of this blog being pictures of the delicious food. It’s a little, well a lot, reminiscent of Jane’s blog in this way, but seriously the food was one of the major draws and interests for me regarding Japan. I loved it at home, but this takes it to a whole new level. I’m totally intrigued and keep making people tell me exactly what it is I’m eating. I made my Vice Principal write down how to prepare udon and miso soup for me yesterday after having lunch out with her. Mmmm, I love it!Out for the “all you can eat and drink feast” which definitely has a name, which I definitely repeatedly forget! I do remember though that the grilled meat is called yakiniku, which you do at your own table and it smells deeeee-licous! 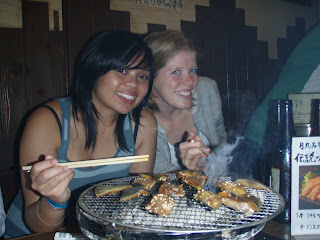 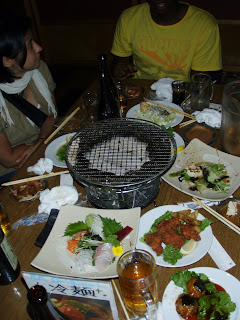 Sushi: no idea what kind of fish, but there were fish eggs, wasabi, and some mayo-esque kind of sauce on top. Awesome! 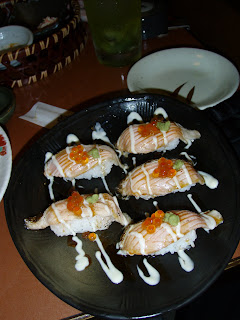 My sarudu (salad) unexpectedly had lil fishies with eyes intact! They`re usually dried, salty, and a nice compliment to the whole dish. 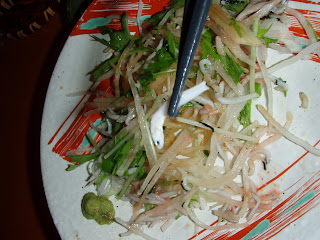