April 25th is a date that might be forever ingrained in my mind (and pocket planner). I had been planning and overplanning the 12 day trip with my sister in Japan for what seemed like for-ev-er. During those long hours of school's Spring Break, cancelled classes, or afternoons at the elementary school where I sit, wait, and wish, I would work through every detail and step of the trip we were to embark on... It was "Jenny Does Japan: 2008!" It was going to be two sisters reuniting after 9 long months apart. It was going to be an adventure in a foreign country, wide eyed and wondering. It was going to be a trip to remember! And that it was: as unexpected as some of the events were, it was definitely memorable.
Despite having nerves less than that of steel, Jenny made it into the country and to our rondezvous point of Starbucks with just one little problem en route: a cancelled flight out of Milwaukee. I see this as the cup half full, because she got to be graced in the presence of a celebrity on the bus. And by celebrity, I mean D-class reality TV "star" Melinda from MTV's The Real World. They're good friends now. The celebrity aura (and a 14 hour flight) must've really worn Jenny out though because she definitely wasn't up for a night out on the town. My friends there to greet her and I compensated for her though:)
In the morning we planned to go to the Tsukiji Fish Market in Tokyo, which meant a 4:30am rise. Jen was more well rested than most, but I think still unprepared for what was ahead of her. This was my first time checking this out, so I was just as in awe. We got there just in time to see the final auctioning of some fresh frozen tuna. 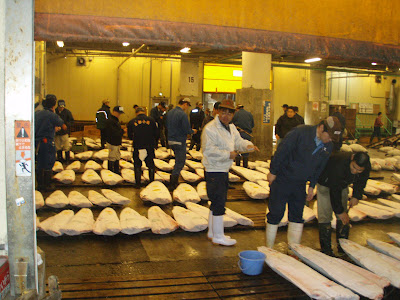 I wouldn't know which one is better than the rest by the looks of it here, but I know which taste good as sushi! 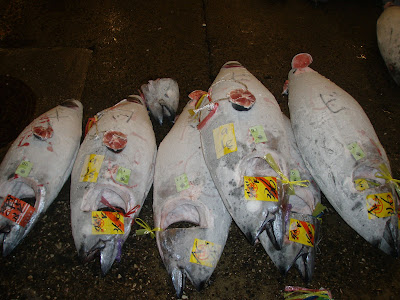 The market was HUGE and pretty packed. There were a good deal of observers there, but the majority of people were workers, sellers, and buyers. It was all about the business, and motorized carts were whizzin' by left and right. Our clothes didn't smell great from the night before anyway, but fish guts isn't a fragrance I was hoping would cover that up. 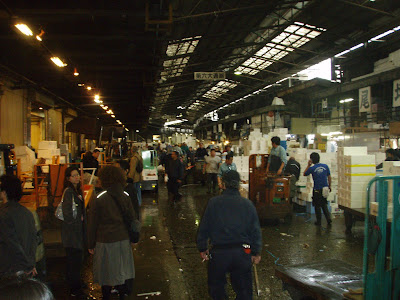 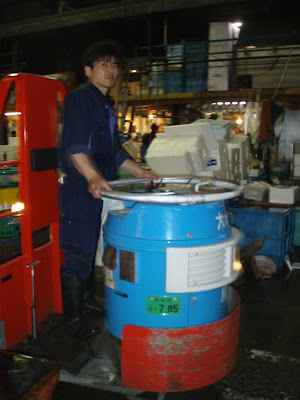 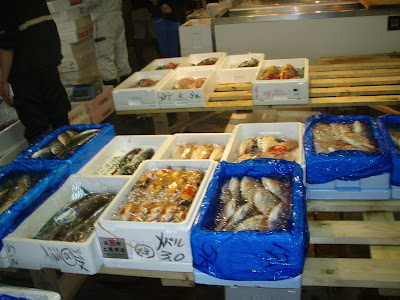 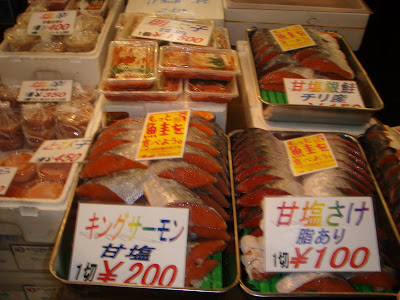 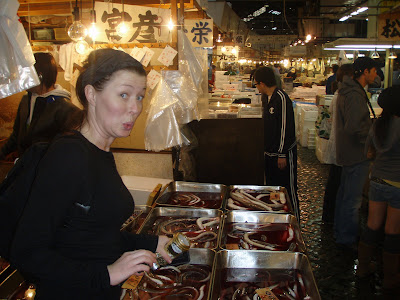 This crab was still scooting around in the box... I don't know how much fresher it gets. A little disturbing though, I must say. 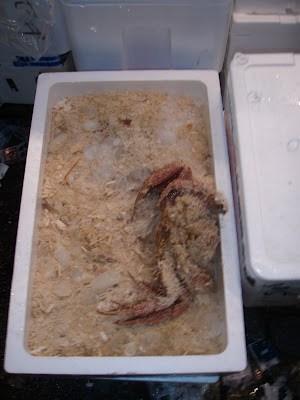 It was cool to see the individual sellers meticulously preparing the fish and various other sea creatures for resale. Even though it was a little painful to watch something die, I couldn't help but appreciate the skill and care taken in preparing the little or big guys. 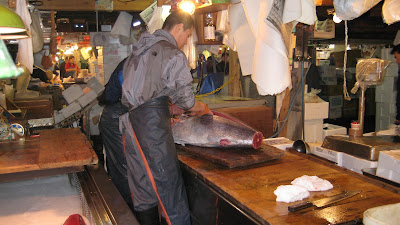 I'm not really sure what's going on with the multicolored blowfish, but it looked pretty cool. 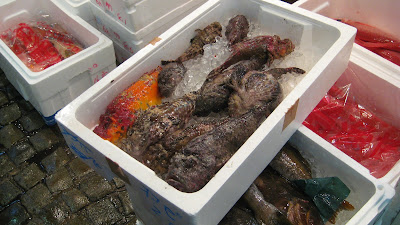 After everyone had had enough perusing around the market, it was time for breakfast... and what better breakfast than sushi at the world's freshest market? There are a number of little side-alleys within the market - none of which I had any idea would lead me to a good sushi restaurant (of which I knew there were plenty of here). So, we just got in a long line and hoped for the best. There were four of us, so what we got was over an hour of waiting, moving probably an inch per minute. When we eventually got into the sushi bar which sat maybe 20 people, we were forced to order immediately and rushed out. A single piece of sushi cost anywhere from $3-$20. We sampled a few things between us, and were rushed out. My tuna and ikura (salmon eggs) were indeed delicious, but I was hoping to savor the experience a bit more.
As was also our luck, it was raining the entire first day Jenny was here. The view from the Metropolitan Government Buildings was less than stellar, but I think Jenny still got a decent overview. The Harajuku girls apparently don't like to get all dolled up to pose under umbrellas, so Jen didn't get to see them or get any free hugs from people in giant fuzzy one-sies. BUT, she did get to check out her first (of many) shrines. This was at the entrance to Meiji Jinguu Shrine in Harajuku, Tokyo. Check out the archives if you're curious about this shrine. 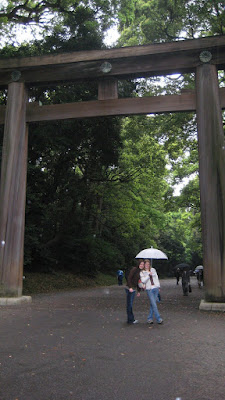 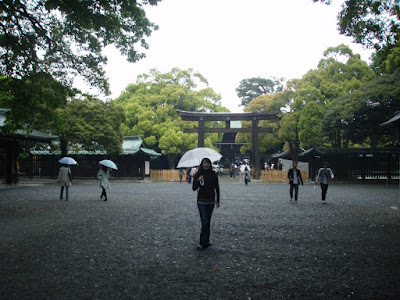 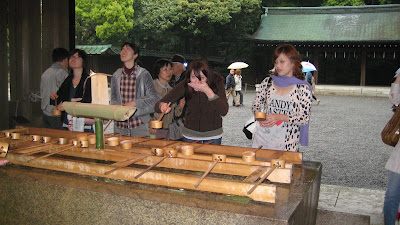 Next up: shopping in Omotesando Hills. Not as fun in the rain, but Jen managed to find a winner! It was interesting to hear Jenny's comments on the fashion. I guess I've never really thought too much about it; I just considered it different and never really got into it. But as we were watching all the people walking by, I really had a greater appreciation for women's wardrobe. She pointed out just how dressy the women were. I'd say 90% were wearing heels and skirts. There wasn't one woman in jeans, and if men were wearing them they were uber trendy jeans. She also got some insight into just how many hair salons there are in Japan. Hair styling is a big deal here and people (especially trendy males) pay ridiculous amounts of money to have it cut and styled in just the perfectly effeminate but attractive ways. I wish I was as into hair as her so I could've been daring enough to have gone and gotten a cut for her to see how it was done. I am not so daring. Point in case: going on 9 months here without a haircut! 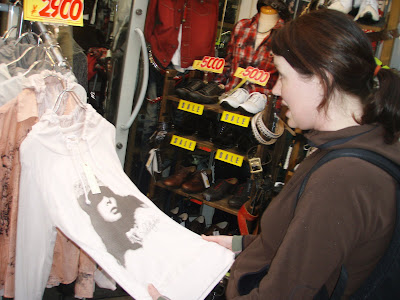 Day 2:
Still rainy in the morning, but it eventually cleared up. There's a wonderful 5km walk around the Imperial Palace. We made it about half way around (Jenny's legs were apparently broken after Day 1... tourism requires ALOT of walking). 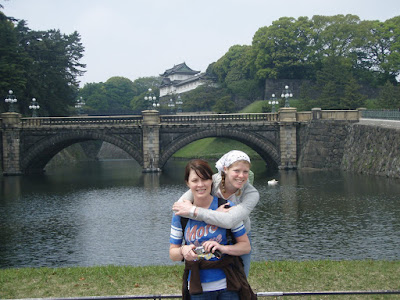 You can't actually go into the Imperial Palace, but you can see the moats and some building around the outside of it. 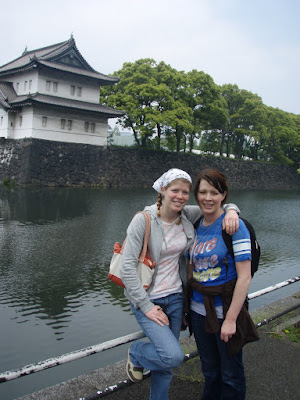 There was a sole Sakura survivor we spotted on the path. Yay! 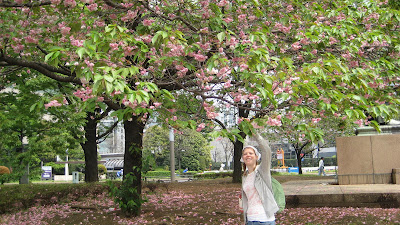 More of the Imperial Palace. 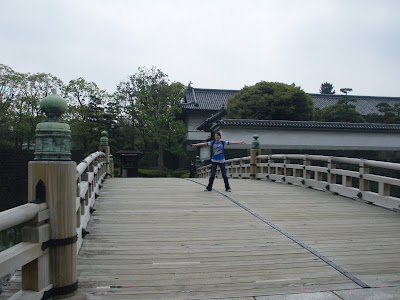 Then we needed a rest, so we went into the East Gardens. It of course required more walking, but eventually it dried up enough to lay down for a rest for awhile before going for our first noodle lunch. 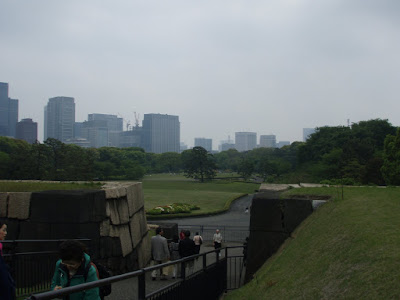 After getting some grub in our tummies, we went to Asaskusa to see my favorite temple, Senso-ji. More information on this temple here: http://sarahmoersfelder.blogspot.com/2007/12/3-day-weekend-means-i-gotsta-go.html . Since it was a holiday weekend, it was pretty packed and Jenny got to really enjoy and feel the crowds in Tokyo. She absolutely loved it! Nothing better than being sleep deprived and in the middle of a tight crowd that doesn't speak your native language. Hopefully though, all the fun new shops and foods and sights distracted her enough to have fun there. I know the ice cream made me happy enough to go around! A big thumbs up to seasonal sakura flavored "soft cream". 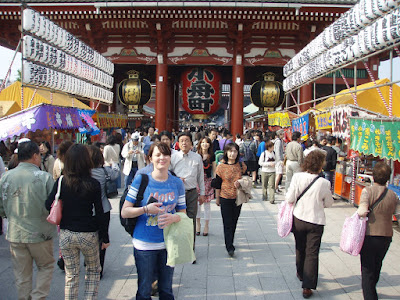 On our way out, we saw this awesome Seiko clock puppet display. I really wish I had video, because it was sooooo cute - but you'll have to use your imagination. 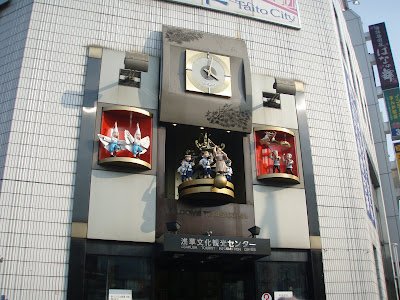 After being to all my fave spots in Tokyo, I wanted to try out one new place for me before leaving: Ueno Park. This park is most famous for hanami (cherry blossom viewing) and it's high population of homeless people. We were looking for a place to chill and rest up those legs Jenny could no longer feel... 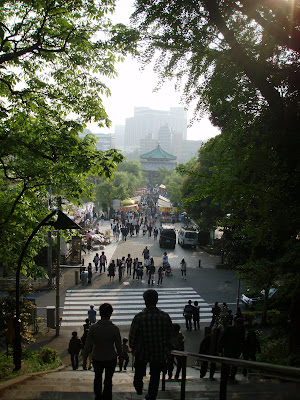 It was cool, but there was actually nowhere to really sit in this park. I wondered why all the homeless people would congregate here if you can't even sit anywhere! 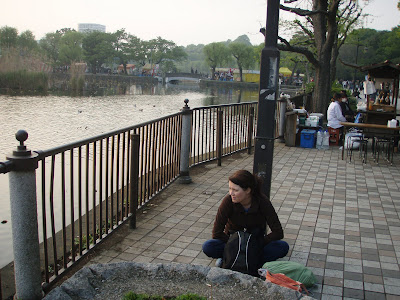 Maybe because it was so beautiful! 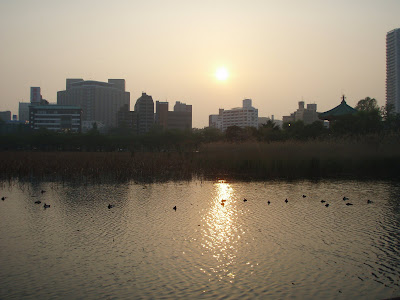 Unfortunately, Jenny had never really adjusted to the time difference here and having a snorer in our hostel room both nights didn't help I'm sure. I think Tokyo is definitely one of those places you grow to love. I really like exploring it and finding something new every time I'm there, but the city just wasn't Jenny's thang. So, we headed through the subway and train systems that were becoming all too familiar to Jenny for a night on an overnight bus to Kyoto... and if there's something Jenny loves even more than sleeping with a snorer - it's "sleeping" on an overnight bus:) 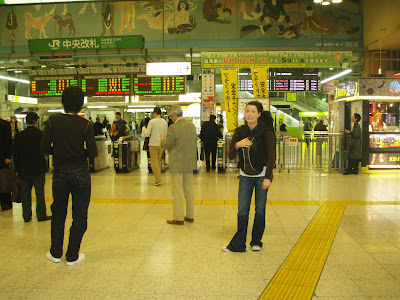