Our hostel was cute and cozy, complete with a little zen garden. A little too cozy for Jen, but I liked it. And, we only had one other roomie, so even if she was a little cold, we could sleep in peace.
Day 2 in Kyoto was of course jam packed with fun places to go. A friend of mine from University was also visiting one of her good friends in Japan and just happened to be sightseeing in Kyoto at the same time as well, so we had the privilege of them joining us for the days' travels.

First stop of the day was Kinkakuji, a temple in the northeastern area. It's called the Golden temple, for obvious reasons. The original dates back to 1397, but there was a monk that was so obsessed with the temple that he burnt it down in 1950. He attempted suicide (unsuccessfully) after burning it, but ended up dying in prison before his seven year sentence was up. What you see today is the reconstruction of the temple from 1955. 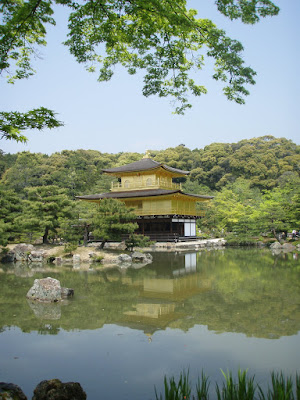 Some people say the reflection of the temple in Mirror Pond is more beautiful than the real deal. I was actually more impressed with the foliage on the grounds than anything. I still can't get over how many different color leaves were seen throughout Kyoto. They were so brilliant, too. Some areas looked like Wisconsin's autumn colors, but in April. It was crazy. Crazy beautiful. 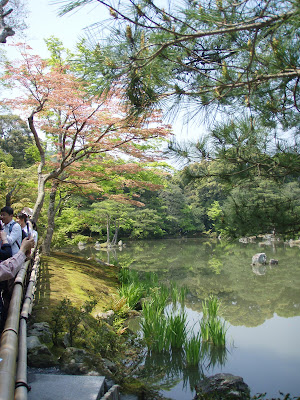 The sole picture we have of all four of us: Michelle (my friend from UW-Madison), Jenny, Katrina, and me. 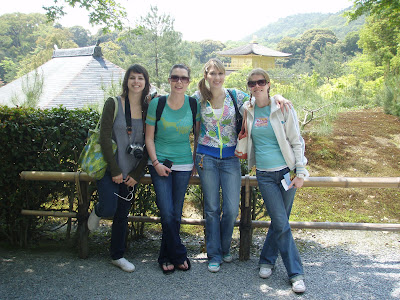 Next up, a walk to Ryoan-ji. Even though Ryoan-ji is technically a temple, it's renown for it's Zen rock garden, which is arranged in the kare-sansui (dry-landscape) style. The temple was founded in 1450 and people have been attempting to be enlightened through contemplation of the garden ever since. The garden has 15 moss covered stones placed throughout a meticulously groomed 'sea' of sand, but only 14 can be seen at any one time. UNLESS of course, you've reached enlightenment. The 30 minutes we spent there didn't really allow for too much enlightenment, but it was interesting nonetheless. We came up with some pretty interesting metaphors for what the garden means to us, but I kinda think that unless you seriously stare, contemplate, stare some more, then contemplate some more until the point of insanity thus allowing for a major epiphany - you're not going to get too much out of this.

This was a baby zen garden at the entrance before the 'showcased' Zen garden. Again, pretty trees are what really drew me in. 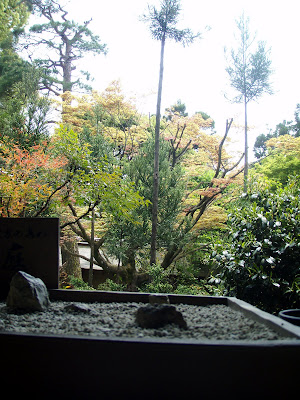 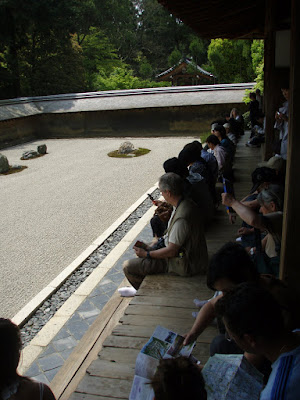 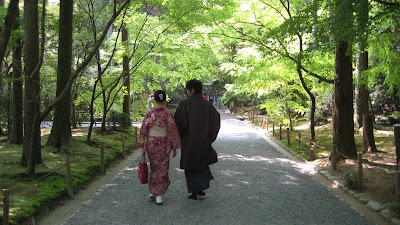 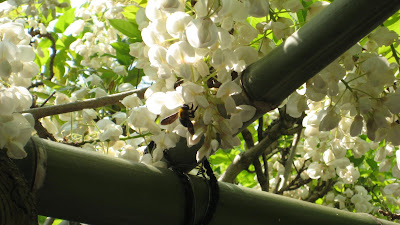 NEXT: further west to the Arashiyama area of Kyoto. Yet another amazingly distinct and beautiful district of Kyoto. I easily could've spent all day here. The weather was perfect with the sun shining, and the walk down Sanjo-dori was sooooo cute! The shops of course had the familiar souvenirs and samples of central Kyoto, but the magnificent surroundings of steep forest laden mountains and the sound and breeze of the Hozu-gawa (River) made it that much more enjoyable. I wish we would have had time to venture off into some of the bamboo groves for the day; there's just never enough time.

For lunch I finally got to try one of Kyoto's specialty dishes: TOFU! Since living in Japan, I have become quite the tofu aficionado. I was never a fan at home (perhaps because of the particularly scarring first impression I had from one of my vegetarian roommate's attempt at making it), but I absolutely LOVE it now. Tofu is so versatile; I mean, you can have it fresh, soft, firm, sautéed, grilled, boiled, in soups or stews, on salads, stuffed with rice, fried, freeze-dried, as ice cream, etc. etc. Did I mention I love tofu? Anyway, my tofu lunch was delicious. And of course where there's a meal, there's a dessert (preferably ice cream), in this case conveniently located within steps of our lunch locale. Now, I've had all types of ice cream in Japan (many of which I've happily and shamelessly documented on here), but this afternoon was a real treat. This awesome guy below had a little donut/soy ice cream/gelato shop. I was in heaven. After MUCH contemplation, and a little convincing on my part to have the guy bend the rules for me, I convinced him to hook me up with 3 types of gelato and a soy ice cream topping. Indecisiveness rewarded again! 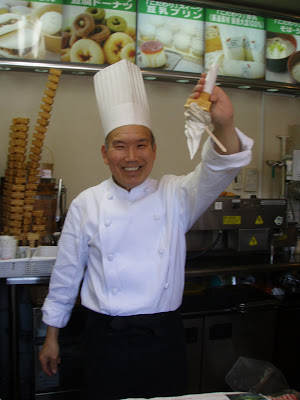 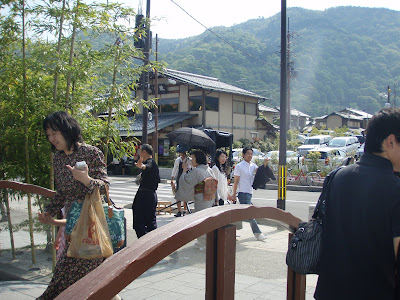 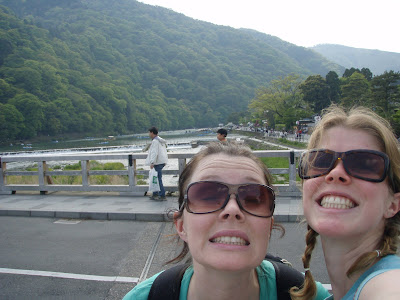 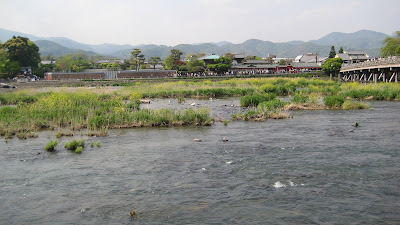 If a picture says a thousand words, how many words is a video worth?


NEXT: We headed to the completely opposite side of town (southeastern Kyoto) to check out Fushimi Inari Shrine. This bad boy was founded in 711 by the Hata family. It was dedicated to the gods of rice and sake, but nowadays is favored more for ensuring prosperity in business. 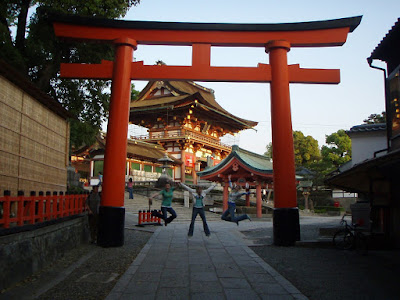 The best time to explore the 4km of torii lined wooded slopes on the Inari mountain is dusk; early enough to see and appreciate the details of the torii and shrines, but late enough that when the sun sets, an eerie vibe overwhelms you as you walk through the various paths, graveyards, and miniature shrines. 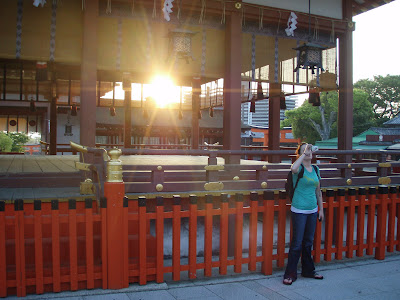 The shrine is famous for the hundreds of red torii and the stone foxes. The fox is considered the messenger of Inari, the god of cereal grains. Some say that the fox is capable of 'possessing' humans, usually aiming for the fingernails as the point of entrance. Since the fox is seen as a mysterious and sacred little guy, I was watching my back. You can tell how serious I took the 'threat' via our rendition of "foxy ladies". 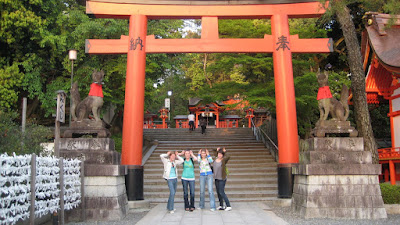 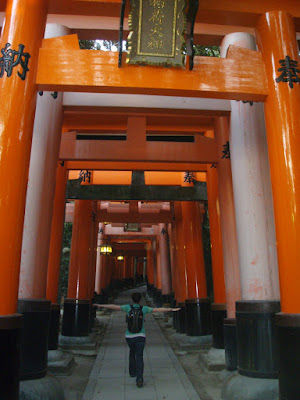 Katrina now has the ability to move at super warp speeds. 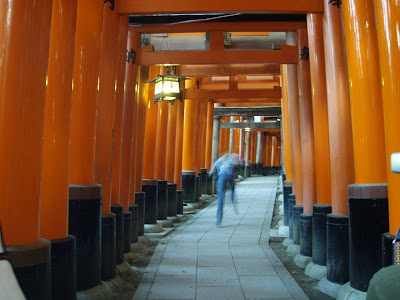 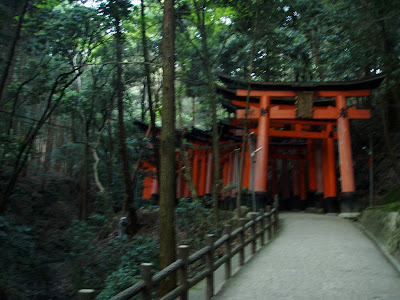 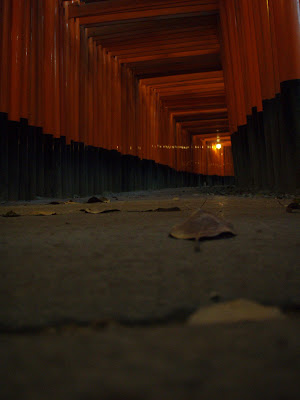 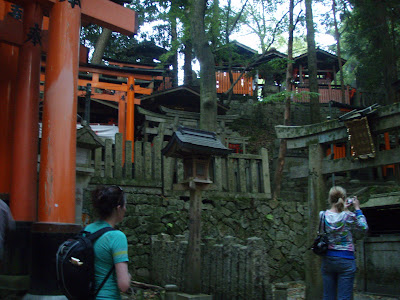 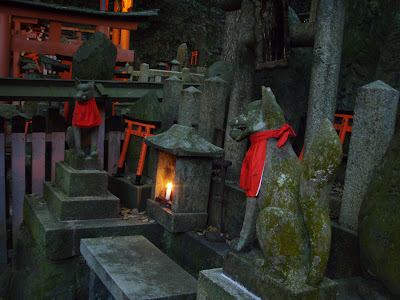 We didn't reallllllllllly know where we were going, or how long it would take, or if it made a loop, or if we were gonna be murdered by the creepy old guy and cats that were following us or not at this point. But, the sun had set, and the view over the city was pretty cool nonetheless. 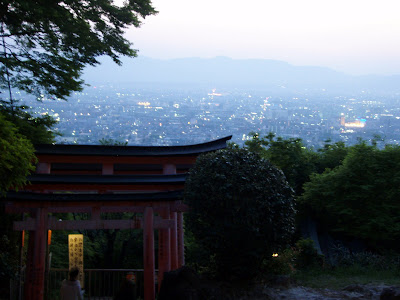 The solution? Keep on walking! And just when we thought it couldn't get any more bizarre, I saw this:

It was actually really cool seeing a family worshiping, and the kids even tested out their mad English skills on me. During the 3 days of the New Year holiday, over 2.69 million visitors come to worship here: the most in western Japan. 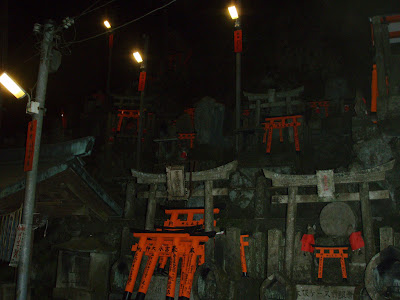 These next two pictures were taken by Alex (and subsequently stolen by me, because clearly my little camera can't capture these awesome night shots). 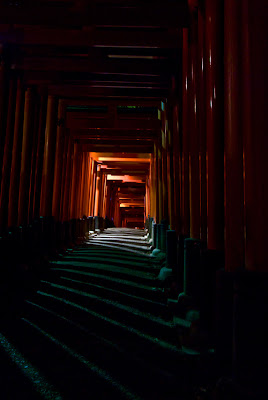 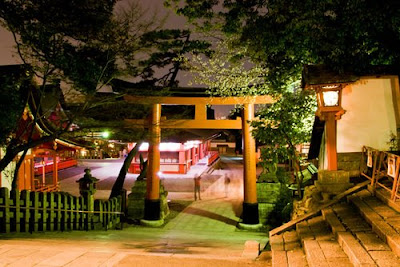 That night we had an excellent dinner in downtown Kyoto after looking for the hostess boys we're now experts at spotting thanks to the inside scoop from Michelle and Katrina. Coolest part of dinner: tempura (Japanese deep fried) ice cream - complete with sparkler! 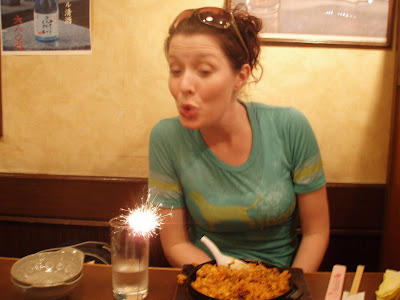