Early (we're talking 6am) Monday morning, Jenny and I very groggily took our first steps off our overnight bus from Tokyo into Kyoto, Japan. Kyoto is referred to these-a-days as the cultural capital of Japan, boasting over 2000 temples and shrines. It was also historically the imperial capital from 794 to 1868. Needless to say, Kyoto and Tokyo are the two tourist "must see" cities, and I was ecstatic to finally be here, sleep deprived or not.
I'd be trying to get here for ever and had many failed attempts, which meant I had tons of time to research. Since the Japanese love visiting Kyoto as much (if not more) than foreigners, I made sure to ask most of my Japanese friends and colleagues for recommendations. Our first stop came highly recommended from my JTE (cooperating teacher): Sanjusengendo (referring to the 33 bays between the pillars of the long, narrow building). No pictures were allowed inside, but there were 1001 statues of Kannon (the Buddhist goddess of mercy). It's hard to imagine 1001 of anything until you see it. Each statue is said to have 1000 arms, but they only literally have 40 arms. Still pretty impressive. My JTE said I was supposed to look for the statue that most resembled Jenny... I'd say Kannon #824, the one with the long fingers and the swords and stylin' hair looked most like Jenny. 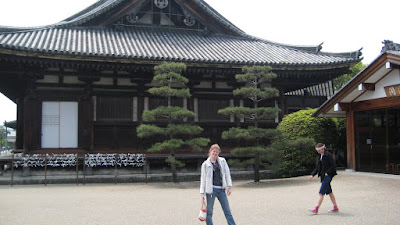 After Sanjusangen-do, we had what was probably the best lunch of the entire trip. I got a delicious bowl of udon with tempura shrimp and veggies on top, 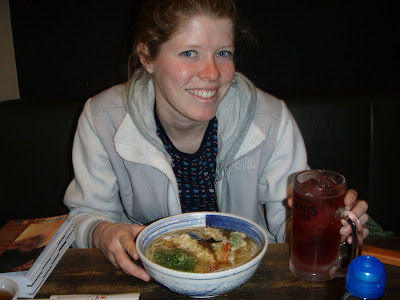 while Jenny got her first real Japanese set meal (teishoku). No surprise she went for the "various fried food" set and graciously left the delicious pickled daikons for me to finish off for her. 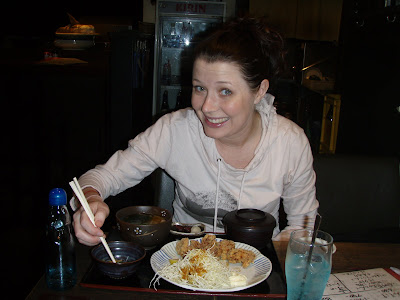 NEXT: Kiyomizu-dera temple. This was probably my favorite temple, partly because the walk there was so awesome.
Age is no inhibition in Japan: I have seen more 60+ year olds rocking the hikes I've done than any other age, my karate instructor is 60 and there are two other 60+ year old men in the class, all my friends at the gym are over 60 (but that's because they aren't shy and are capable of speaking English), and I have an 80 year old assistant at school. Old people are dominant! 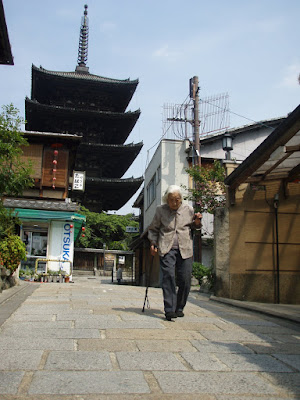 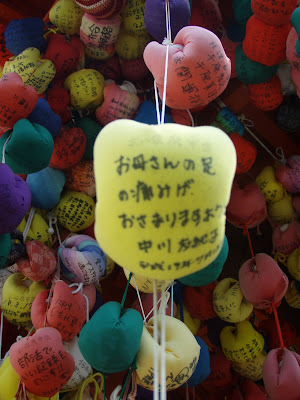 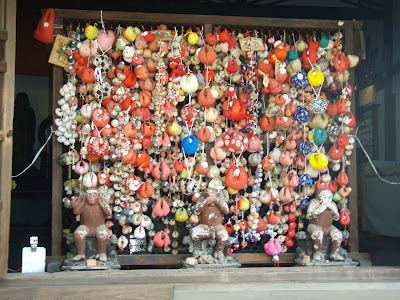 This has nothing to do with Kiyomizu-dera, but we spotted it on the walk there. Bizarre. 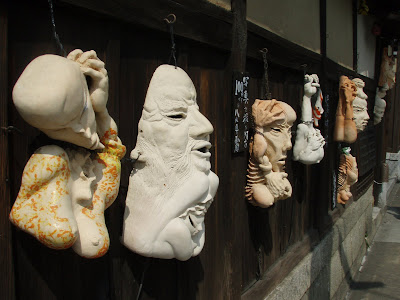 We made it to Chawan-zaka (Teapot Lane), where all the Kyoto local souvenirs and snacks are sold. Jenny was heartbroken she couldn't get the local Kyoto mochi which is triangular shaped and filled with an. It became our mission to find some that wouldn't expire before she got home... we failed. 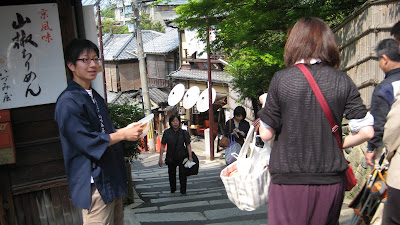 Awww - she hasn't QUITE gotten completely annoyed with my "let's take of ourselves in Japan!!!" shots... yet. 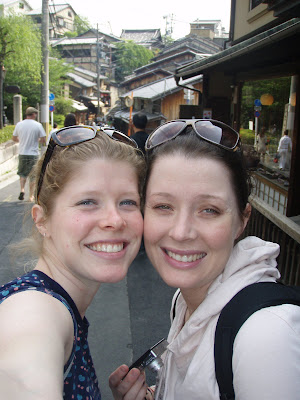 Black sesame mochi - allllmost good as the strawberry or cinnamon. Really, I just took this picture for Austin. It's got your name written all over it, bro. 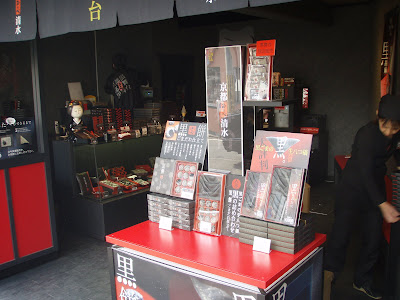 Yay! We made it! This bad boy was originally built in 793, but reconstructions began post 1633. More information brought to you by Fujicolor below. How convenient. 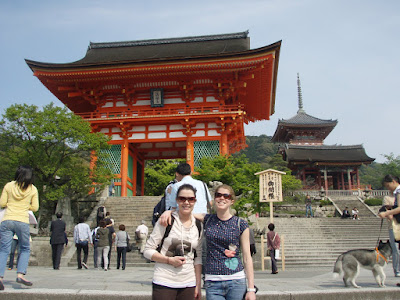 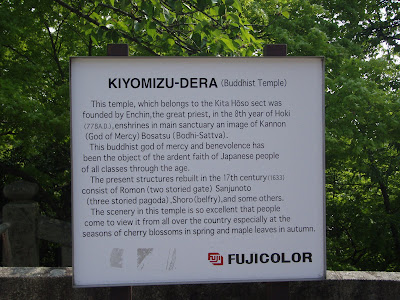 I stole this picture from Alex. It gives an amazing perspective of Kiyomizudera from the distance. It's incredible. 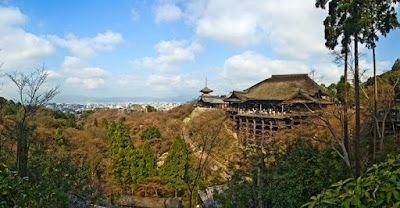 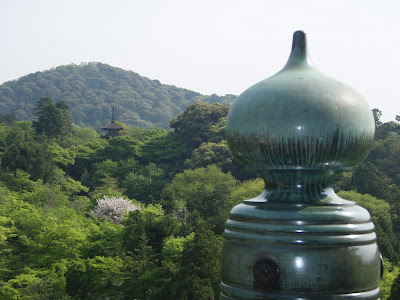 Another video, taken from the veranda of the temple. 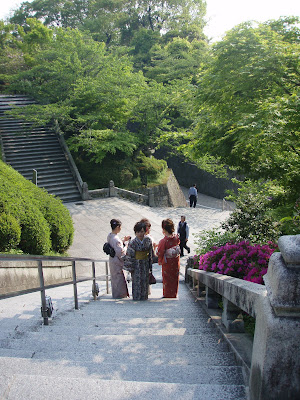 Next we headed to Nanzen-ji - BUT, got there a liiiiitle bit too late and I failed to know exactly where it was we were heading amongst the expansive grounds and all the confusing sub-temples. Had we actually made it to the old Emperor's retirement villa, I'm sure it would have been gorgeous, but since most things close before 5pm, we were SOL. We did manage to see the aqueduct to the subtemple of Nanzen-ji, which is how I knew we were close. Close, but no cigar.

"Garden" above the aqueduct we got totally ripped off to see. 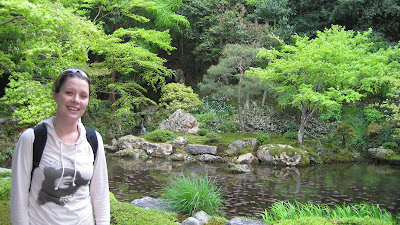 Entrance to Nanjen-ji Oku-no-in... should those visiting be curious as to where to go, before 5pm and all. 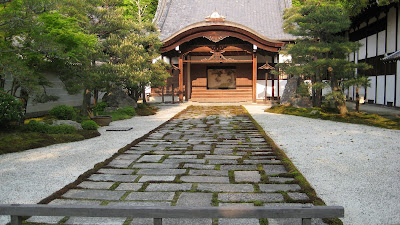 Even though I was all about being enlightened on the "Path of Philosophy", Jenny was feeling less than philosophical. So we found a bus (eventually) and headed into downtown Kyoto for dinner. You can hardly tell by the smile on Jenny's face just how mad she was at this point... Jenny's legs no likey so much walking. I knew she wasn't in the mood to peruse, but downtown Kyoto was amazing! Totally unlike any other city I've seen before in Japan. Absolutely gorgeous. 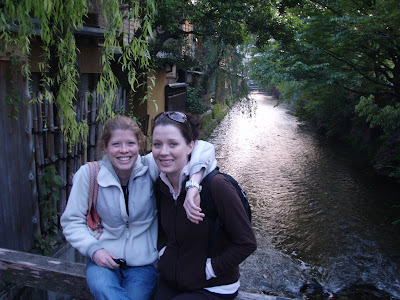 It was really hard to capture what the streets really look and feel like here, but this is my attempt. 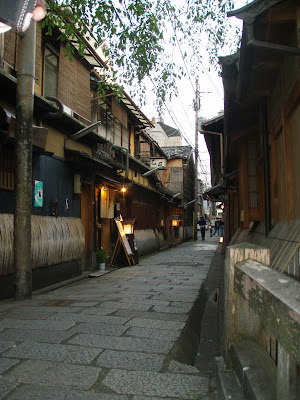 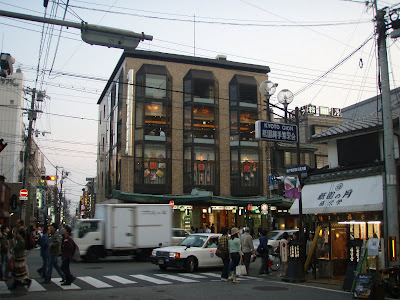 Hilarious statue in front of a cute little okonomiyaki place. 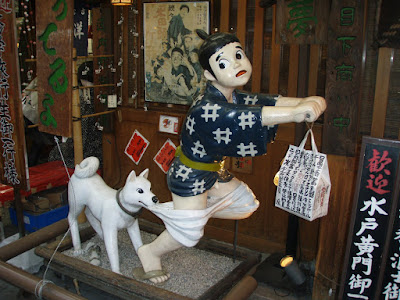 Kamo-gawa: not all that impressive of a river actually. Pretty polluted and a very high population of homeless people living alongside it. Still, nice to run alongside in the morning and I even spotted some giant cranes grazing in the morning. 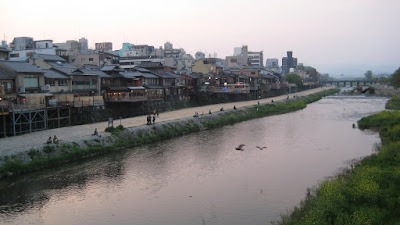 After the sun set the city had an even cooler vibe to it. We opted for a Thai dinner for the night, and it was spectacular. Spot on. You could easily spend an entire lifetime trying out a new restaurant every night in Kyoto, or Japan for that matter. The hard part is finding somewhere where I can read the menu and order. Yay for pictures and plastic models! 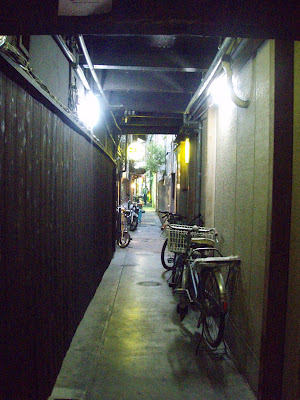