There are two ramen museums in Japan; one in Yokohama and one in Osaka. Yes, ramen museums. I don't even really like ramen, but the mere concept of a museum dedicated solely to instant and cup noodles was intriguing to me. We went to the far superior "Momofuku Ando Instant Ramen Museum" in Osaka, which allows you the opportunity of making your very own instant ramen, from scratch! Appealing to everyone and anyone (except one Miss Jenny Moersfelder)!

Being the good little tourists we were, we got there exactly at our reservation time and got to see the Museum staff doing their little pre-workshop set-up and pep talks. I was so giddy, it was ridiculous. 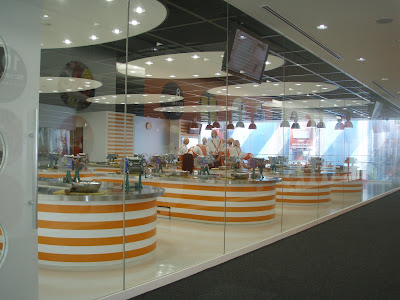 Then we put on our cookin' aprons (like all good Japanese housemakers) and bandannas to keep things sanitary and all. Jenny's smiling here... 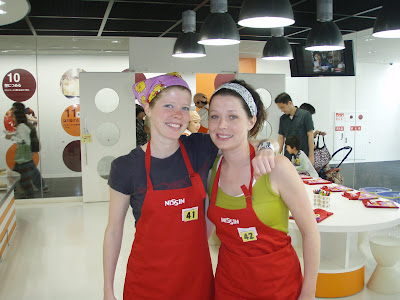 ...but this is what she was doing most of the time. 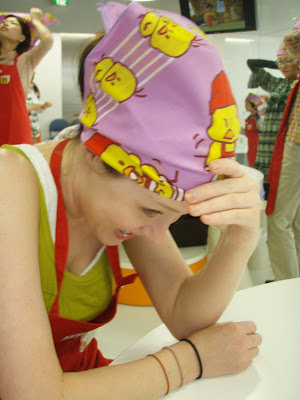 Check out these pics as we go through the steps of making instant ramen:
- After combining the oil and water to the flour, we kneaded the dough. 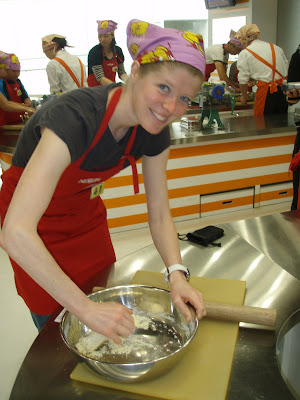 -Then it was time to roll the dough. 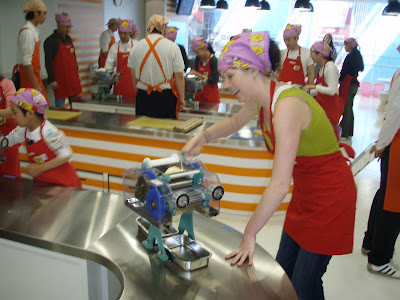 
-Next: slice the dough up into noodle strands. 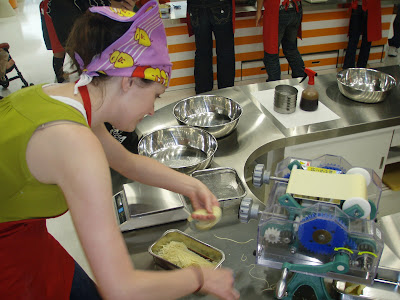 -Then we weighed the noodles to the exact weight for instant ramen packages, and watched as they deep fried the mold. 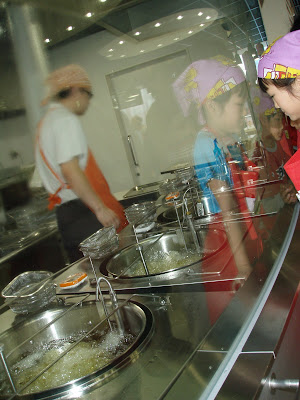 -Then we designed our own Instant Ramen Noodle Packages. Clearly, the cute little kids next to us had much better designs that us. The little girl was all about using her English skills too, which was cute. 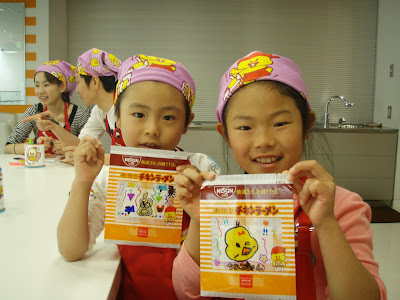 Then we stuck the noodles in the bag and zipped 'em up airtight. Even though I didn't understand a word the instructors were saying or any of the video that was played, those were two of the coolest hours I have spent in Japan. It was awesome to see how instant ramen was made and it doesn't get much more "hand on". Plus, it was a nice little snack later on for Jenny on the shinkansen.
Oh yeah, massive cup noodle! 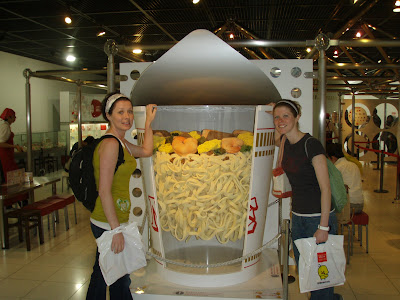 Another "interactive" element they had here was the "make your own cup noodle" factory where you got to choose the flavor of broth seasoning and 3 ingredients. So... Mother's Day was coming up, and I'd already gotten my Mom all the little Japanesey gifts I could from here for her b-day and Christmas and wanted something unique. I wasn't even sure if she liked ramen either, but what better gift from your 24 year old daughter can you get than your very own, specialized instant ramen cup!?!?! Yeah, it was genius. Although, carrying around a huge blown up protective bag for the remainder of the trip was a bit of a challenge. 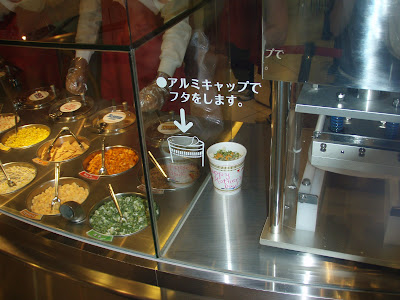 Onto the museum part, where there is: The Instant Ramen Tunnel!!! 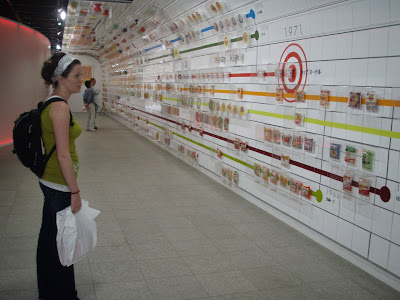 and a display of the first astronaut to consume instant ramen in space! 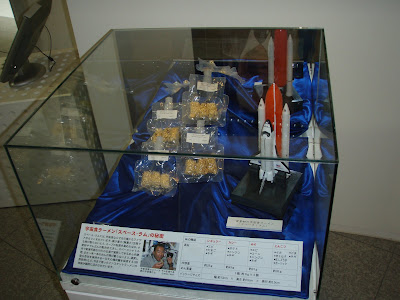 There were tons of other cool things here, but I'm afraid you're probably as receptive as Jenny was to this and so I probably bored you enough through the last 17 pictures and will move on.
What a wise little boy. 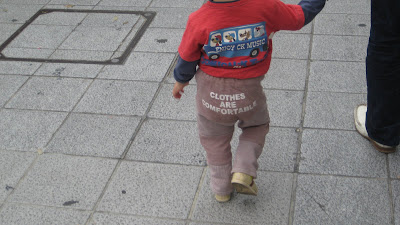 Next stop: Himeji Castle. There are many castles in Japan, but Himeji is unanimously acclaimed as the most splendid castle that remains standing. It is also one of few that has survived in its original form. It was built in 1580, but enlarged about 30 years after. Himeji has had 48 successive lords. 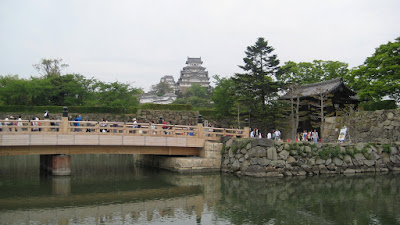 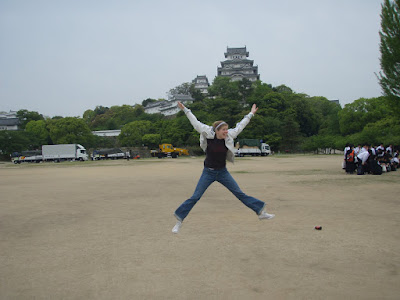 Passing through the main entrance. 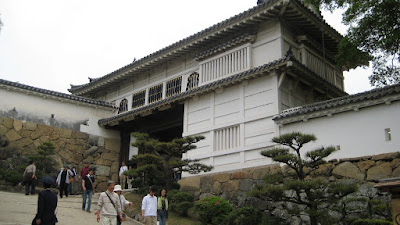 One of my favorite things in the castle was this model of Princess Sen in the room she used to occupy of the Kesho Tower. It was the only model in the whole castle, but I wish there would've been more. Really helped visualize what life would've been like back then. 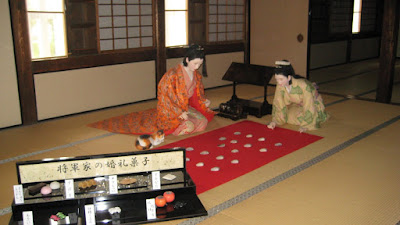 There are rectangular, triangular, and circular openings like this one throughout the walls of the castle. They were used for firing guns and shooting arrows at defenders. There were also openings made specifically for pouring boiling water or oil onto anyone tricky enough to make it past the defensive slits on their way up to scale the walls. 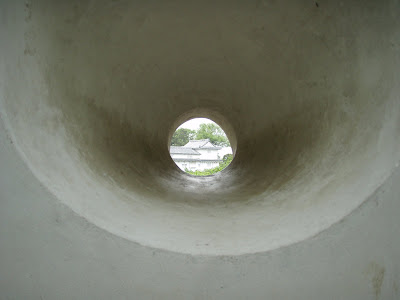 The five-story main donjon (heavily fortified central tower) and the three smaller donjons to the left. 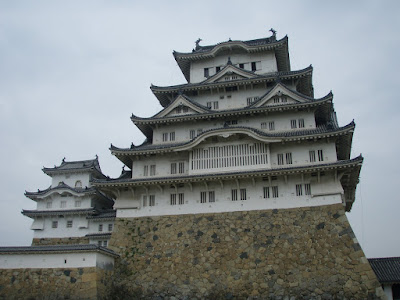 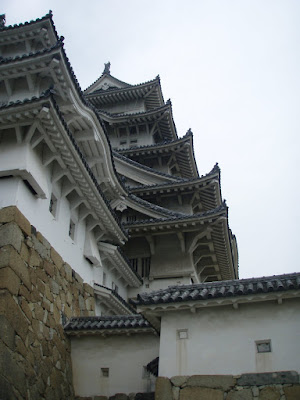 Here's a video pan of the castle and the city below.
There wasn't a whole lot to actually see inside the tower. A lot of barren space and plaques that said "there used be guns here". But, this was one of my favorite things: a painting of Bodidharma. It was interesting to me because we "Daruma Dolls" (http://en.wikipedia.org/wiki/Daruma) are a specialty of Gunma. There are big festivals selling them and it's a big event when they get burned once a year. They're almost cartoon looking... well, like a mix between being cartoony and being a weeble wobble. So, to see this painting of the actual person it's meant to represent was pretty crazy. 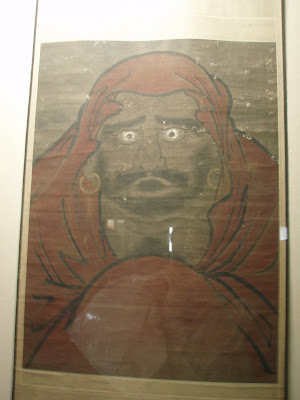 My pictures from inside the castle turned out horrible... so what do I always do when pictures just don't cut it? Steal from Alex!!! Thanks, Alex! 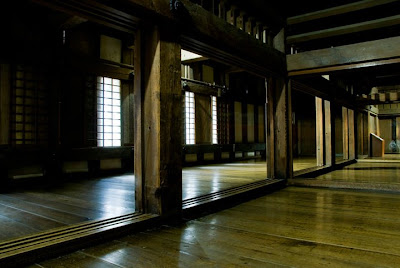 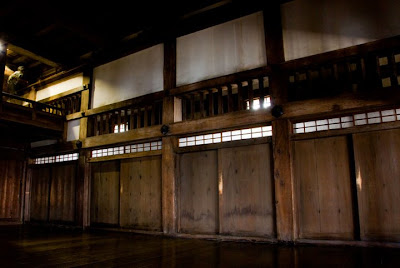 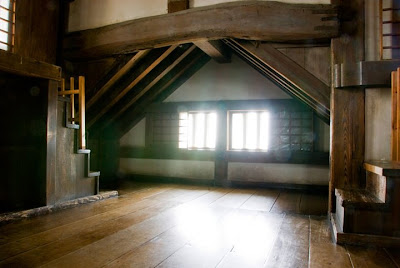 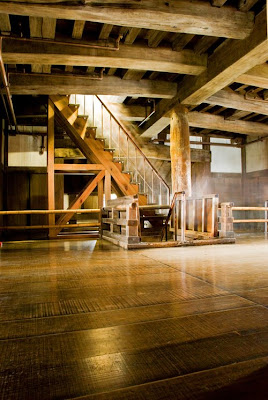 A kinshachi (tiger headed fish) gargoyle on the roof. 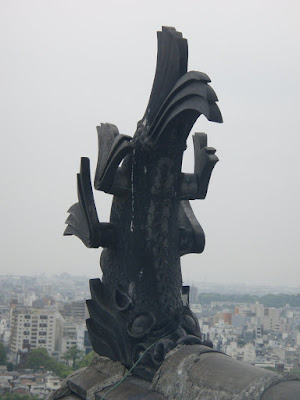 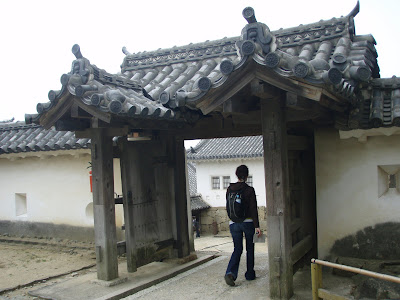 That night we had to do another classic Japanese food night. So we started out with one of Osaka's most well known foods: takoyaki (http://en.wikipedia.org/wiki/Takoyaki). It was more of a 'had to do it to do it' thing than a craving for takoyaki, and neither Jenny or I reallllly liked it. So we moved onto my hands down favorite food in Japan: SUSHI!!! Of course, we already ate this once after the fish market, but we each only got like one thing and were super rushed. So in Osaka - we did it right: kaiten sushi!!! Conveyor belt sushi, baby; with every type of sushi your little heart can desire all at a buck a plate. With cold draft beer on the side, this is my ideal meal. 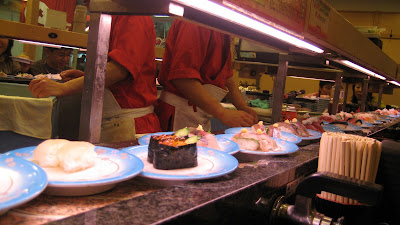 There were a lot Jenny wouldn't try, but the things she was going for were bizarre. Seriously, our tastes in foods are complete opposites. I think the highlight of the night was her accepting to try the raw beef, with raw egg and chives atop vinegared rice... it was not an enjoyable attempt, and she left it there all mushed up and staring at us for the rest of the meal. Some of the dishes were new to me, but a kaiten sushi first for me was seeing a 4 foot fish brought in and them slicing it up right there next to us for the dishes. That's about the time Jenny insisted we leave. 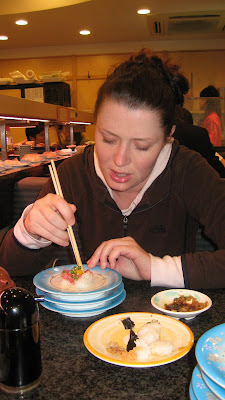 Following up dinner with a crepe, of course! 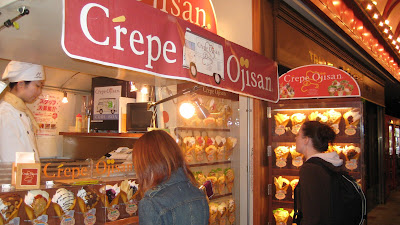 Hi, may I know the location of the sushi shop you went to? Many thanks. =)

Hey! I'm not exactly sure what the name of the place was... I asked our hostel employee (at J-Hoppers) what kaiten sushi he'd recommend in the Kita (north) area and he drew us a map of the location. It was about a 5 minute walk southeast of Osaka Station. You could probably just ask the same question to anyone in that area to find it:) Otherwise, I've heard that Maguro ten is in that area and also good: all you can eat sushi for 1500 yen for men, less for women; or if you're located closer to the Minami (south) area of Osaka, you might wanna try Genroku Zushi (first kaiten sushi ever!). Good luck!