When I Was in 'Nam: Take Five: Cu Chi Tunnels

After getting our world religion lesson in at the Cao Dai Temple, we headed to Cu Chi to get our war history lesson. Cu Chi is most well known for the tunnel networks underground that facilitated the Viet Cong's control of this area. It used to stretch all the way from Saigon to the Cambodian border and covered more than 250km of underground distance; that is , until the American soldiers resorted to massive firepower and gassed, shelled, bombed, and defoliated the area to complete devastation. The soldiers not only had trap doors for intruders, it encompassed living areas, storage facilities, weapons factories, field hospitals, command centers and kitchens for a life which 'escaped' the war above ground and allowed for communication and surprise attacks on the Southern Vietnamese and American troops.

Our tour group went to the Ben Dinh area of the tunnels. First we watched a propaganda video from during the war that was dubbed over in English. You can imagine how fond of the US they were, so we naturally felt very proud with all our international travel buddies. 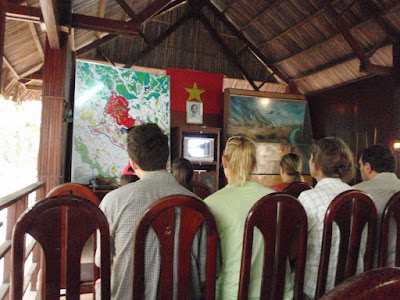 This is me, pretending to understand what it'd be like to go into the tunnel. I obviously don't get it, since I have a giant smile on my face. Also, the 'tunnel' didn't go actually go anywhere. But, it was still kind of scurrry. The guy behind me was our awesome tour guide, "Slim Jim". 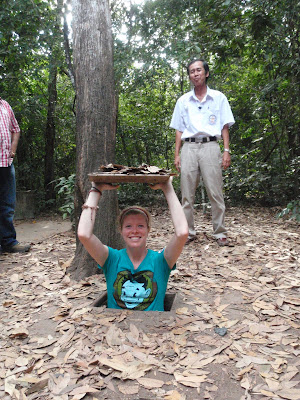 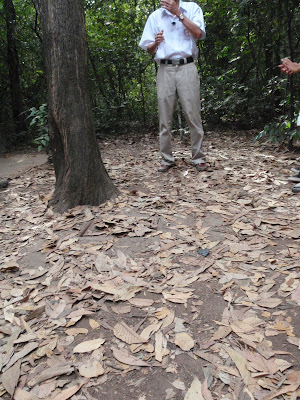 There were some war tanks and displays of the tunnels and traps the Viet Cong had set. Intense to consider what it would have been like to step on something called, "Clipping Armpit Trap". 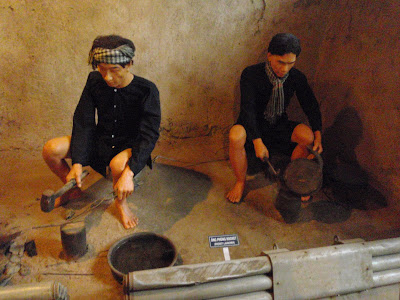 Brooke went all Palin and tried out an AK-47. 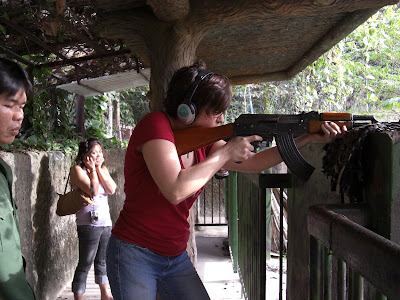 She was also the only one us three that made it through the entire 20-ish km underground stretch of tunnels, which by the way were not actually this big. When the Viet Cong used them, they were half this size; they've been enlarged so that "Westerners" can fit in them. True story. 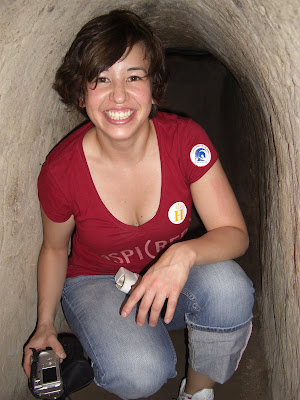