When I Was in 'Nam: Take Four: Cao Dai Temple

Brooke was completely and utterly enthused about the opportunity to see where Cao Daism, a religion established in 1926 which is syncretist and monotheistic, was established. Cao Daists believe that God is the reigning power of the world and founder of the church and follow the Three Teachings of Saint, Sage, and Buddha. The minimum goal of believers is to rejoin God the Father in Heaven and the ultimate goal is freedom from the cycle of birth and death. It is definitely a minority religion (less than 8 million followers) in Vietnam but intriguing nonetheless.

So, off we went to Tay Ninh to see The Cao Dai Holy See. This is the view of the temple from the front. 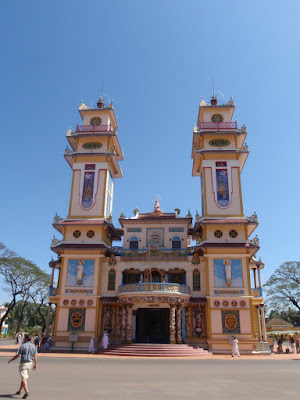 The Divine Eye is a symbol seen throughout the temple. 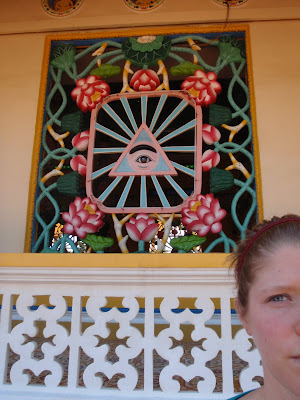 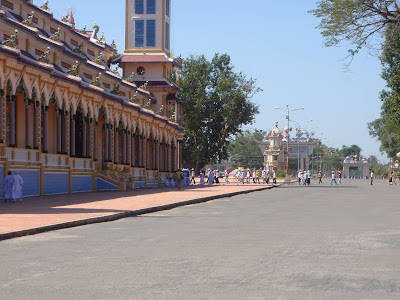 A Cao Dai clergywoman at rest as we enter. 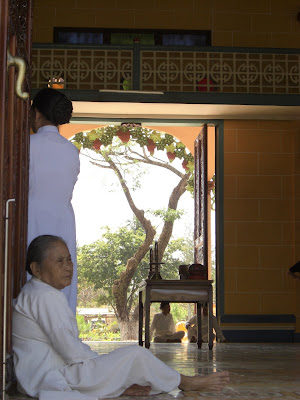 Inside the temple those worshipping get into order while we tourists view from the overlooking balcony. 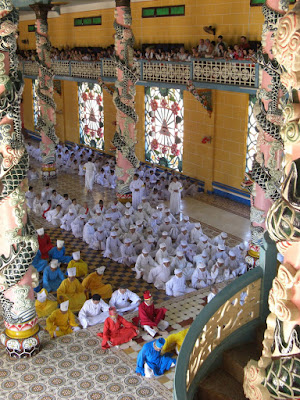 It was a truly gorgeous temple. 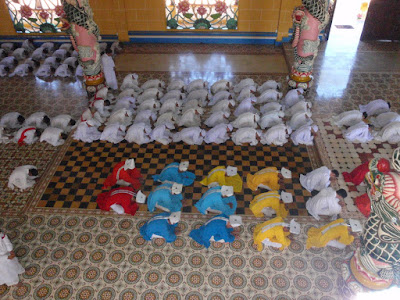 This mural depicts the Three Saints of Cao Daism (from left to right): Dr. Sun Yatsen (1866-1925) was a Chinese statesman and revolutionary leader, Victor Hugo (1802-85) was a French poet and author, and Ngyuen Binh Khiem (1492-1587) was a Vietnamese poet. The three signatories are said to give spiritual guidance and assist believers in spreading the new holdy doctrine. 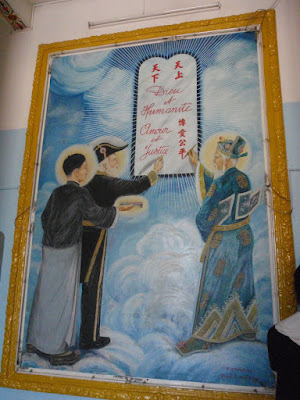 Check out this video of the prayer service.

Great site! Perhaps we can help each other to get noticed. I have signed up to follow your blog. Please follow mine at eweniquegifts.blogspot.com. Would love to have you also visit my store at www.EweniqueGifts.com.

Rachel Noël
EweniqueGifts.com
Gifts for the person who has everything!
Follow our blog for VALUABLE COUPONS!!!
eweniquegifts.blogspot.com