When I Was in 'Nam: Take Six: The Result of a 'Nam Soccer Victory

Just before the New Year, families and friends all gathered round the TV. Not to watch the Christmas Parade or the New Year`s Countdown, though. They were gathered in the masses to watch the Suzuki Cup `08 Soccer Game. Totally unknowing, we got back pretty late from the full day tour, had to find accomodation since ours was conveniently no longer available, and headed out immediately for some grub. Or at least, that was the plan.
UNTIL we realized that every shop, bar, and home we passed had individuals 7 to 70 years old gazing at the boob tube. We finally walked into this one hotel to see what the fuss was all about, and caught this on the screen: 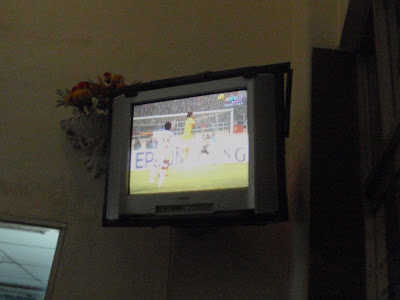 It was the final winning goal for Vietnam to beat Thailand in the finals of the Suzuki Cup, 3-2! Everyone in the lobby went absolutely nuts while we struggled to figure out what was going on. We were excited they were excited, but had no idea what was about to ensue.

The local park was all decked out in lights anyway and the people were out and about. 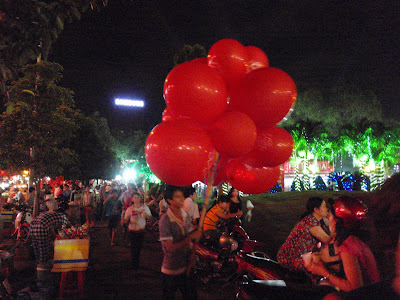 New Years Decorations were up and glorious. 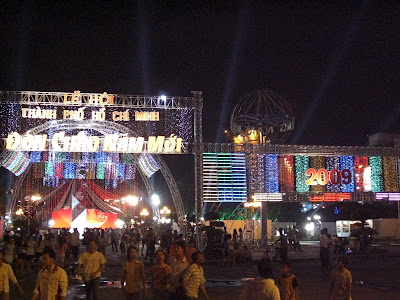 And then THIS happened:

I could totally care less about football (what we Americans , but no one else in the world, refer to as soccer) on an international (or local for that matter) level. BUT, the enthusiasm and vibe that night after that win was incredible. It seemed as if all six and a half million people in Saigon were gathered within the streets armed with a Vietnamese flag, a noise maker of sorts, and a smile as wide as the South China Sea. It was incredible! 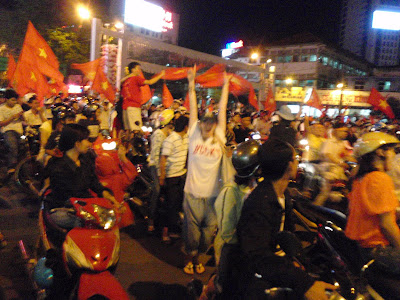 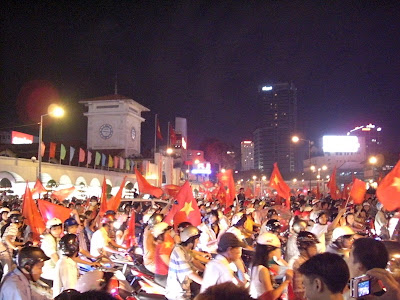 Traffic eventually came to a stand still and didn't move for hours. The celebration continued even longer. 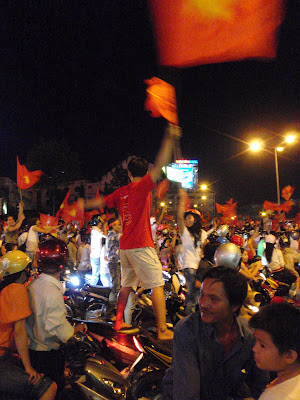 Our night had started out pretty crappy since it was our last in Saigon and the hotel we specifically booked in advance gave our room away, leaving us to carry all our luggage around the city at 8pm attempting to find an open room during peak travel season. We probably got turned down a good twelve times before finding this gem: three bucks a night for a king sized bed each. Score! 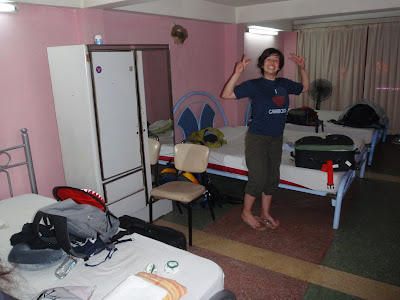 Kristine and I couldn't get enough of the action, which was still alive and well four hours after their win, so we headed to a local bar to get a view from above. Lovin` it! 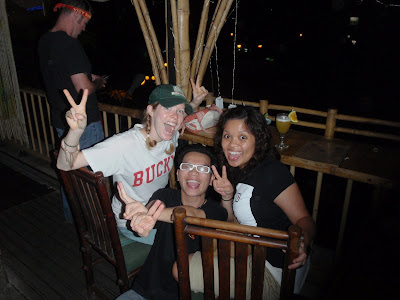 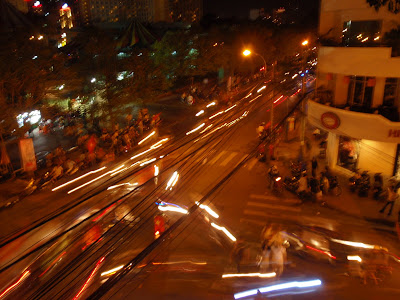