When I Was in 'Nam: Take Seven: Making it Through the Mekong Delta

The next leg of our trip was heading through the Mekong Delta region of Vietnam, although it ended up being more of a thigh because the time spent there was cut way too short. The Mekong Delta is referred to as Vietnam's 'rice basket' what with their contribution to establishing Vietnam as the world's second largest rice exporter. I really wanted to take a few days to really take it all in and do a homestay with the famously friendly and easygoing people who have used the Mekong River for generations to sustain their lives. That vision got nixed though and we ended up essentially just trying to make it through the region in time to get a ferry transfer to an island. It was rushed and crazy just trying to make it happen, but even in the fury the Mekong Delta made a mark on my memory.

Lots of time in the bus commuting, starting out at the gorgeously green rice paddies. 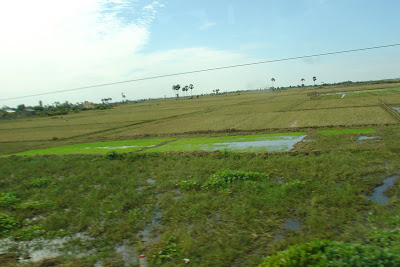 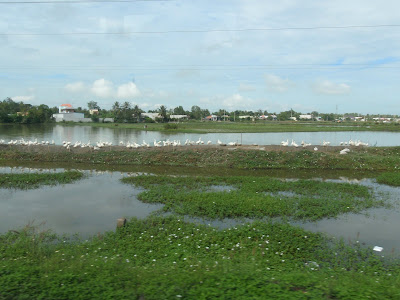 From Ho Chi Minh we headed to Ben Tre for a little afternoon tourist-rific trip down the Mekong River. 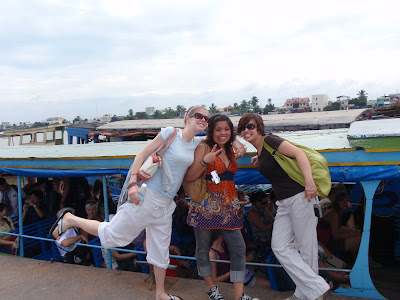 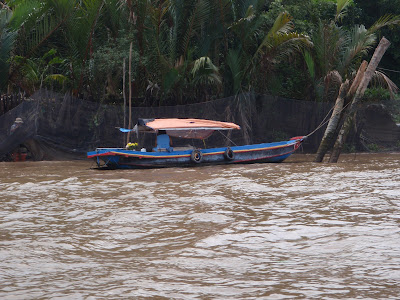 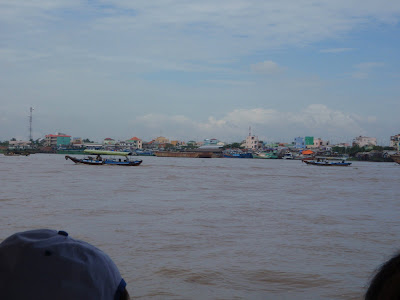 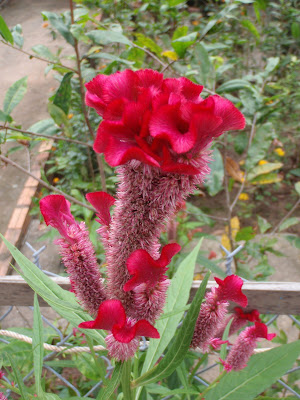 We hopped off with the tour at little 'village', which I don't think anyone actually lived in. It seemed to be a community purely in existance for tourism, with little activities and sights to amuse. I was amused, but not incredibly impressed. I can't believe I was this close to bees. I hate bees. But I do love the fruits of their labor! The honey on this hive was delicious! 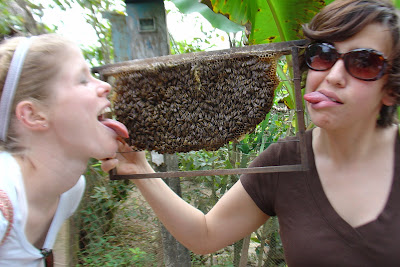 Go ahead - touch and hold the big scary snake! 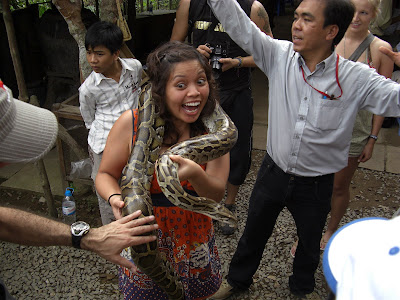 Below is a picture of durian. It's a fruit that grows in south-east Asia and had become somewhat of an urban legend for me after hearing about it from so many fellow backpackers and friends. Yes, this durian had become the topic of many a conversation, debate, and dream for me. It's said to have a terrible, appalling, and sometimes illegal scent that turns many off to the fruit before they've even tasted it. But I had also heard that should one be brave enough to forego the raunchy smell and delve into the flesh of the fruit, they would be greatly rewarded with a little taste of heaven.
I finally spotted said durian in it's "natural habit", as seen below. 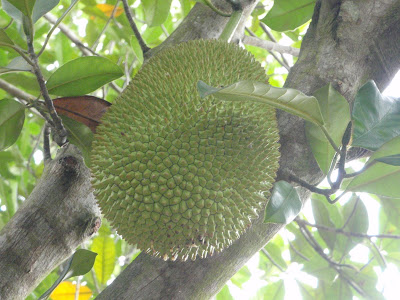 That one was not for the taking, but I fiiiiiinally got my opportunity to try the infamous fruit that night in Can Tho. I manned up and splurged on the fruit the size of my head. I haven't a clue as what is the proper way to choose a good durian, so I just pointed to the bunch and asked the fruit shop lady for one. She proceeded to go to town on shelling it and sorting it into a container.
The fruit was not NEARLY as retched smelling as I had been told. I was actually a little disappointed about that. Didn't seem like a such a feat without thinking I was going to vomit from the smell. I kindly allowed Brooke and Kristine to have the first samples. After they gave the okay, I dug in.
There were big 'ol seeds inside that the very ripened, green-ish yellow, avocado-esque, flesh loosely clung to. No need for utensils as we just dug our fingers into the gooey mess. I found it really tough to describe the taste and texture of it, so I conveniently found another dude's quote after his first experience with durian which hit the nail on the head for me:
"A rich custard highly flavoured with almonds gives the best general idea of it, but there are occasional wafts of flavour that call to mind cream-cheese, onion-sauce, sherry-wine, and other incongruous dishes. Then there is a rich glutinous smoothness in the pulp which nothing else possesses, but which adds to its delicacy. It is neither acid nor sweet nor juicy; yet it wants neither of these qualities, for it is in itself perfect. It produces no nausea or other bad effect, and the more you eat of it the less you feel inclined to stop. In fact, to eat Durians is a new sensation worth a voyage to the East to experience. ... as producing a food of the most exquisite flavour it is unsurpassed"
(Alfred Russel Wallace, 1856).
While I don't entirely agree with this British naturalists rave review, his description is so true. I'd say it was good, very good. Looks like Brooke would say otherwise. 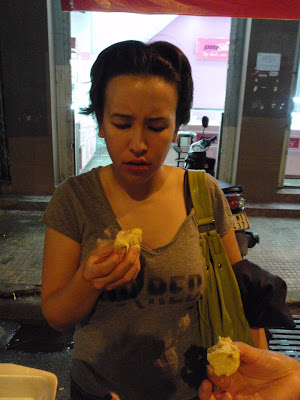 Okay, back to Ben Tre. After playing with bees, snakes, having tea, sampling some fresh non-durian fruit, and listening to some local folk music, we got back onto the river. This time, it was on quaint little canoes. We actually ended up seeing the same cool chicks from England we had met on the Cu Chi Tunnels tour and loaded up together. For some reason, five foreign girls on a canoe in Vietnam produces a large desire to belt out animated Disney movie song lyrics. The Vietnamese were not amused. 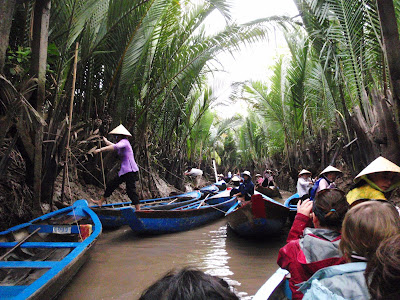 Back on the Mekong River. 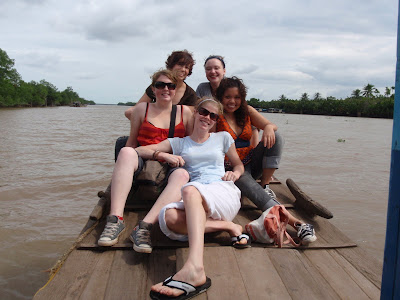 Even though the activities for the tour were pretty corny, our tour guide was absolutely fantastic. If I can demonstrate half as much enthusiasm as he did on the job, I will be a great, or at least an incredibly outgoing, teacher. Here he is explaining how coconut candy is made. I don't know if he actually cares about coconut candy that much, but I totally bought it. 12 packs worth of it. 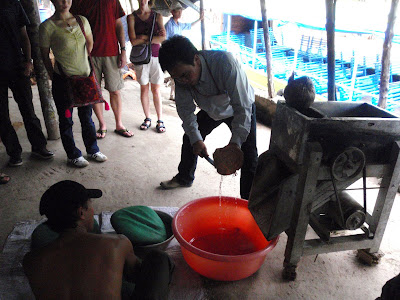 This guy's job is to sit and stir the liquefied coconut for about 30 minutes until it's ready to lay out and cool before slicing and dicing it. 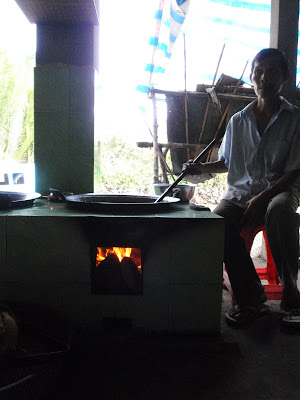 By night we had made it over to Can Tho. We got there with just enough time to experience durian, get dinner, eat ice cream, play with Ho Chi Minh, and squeeze a nap in before our 3am rise. 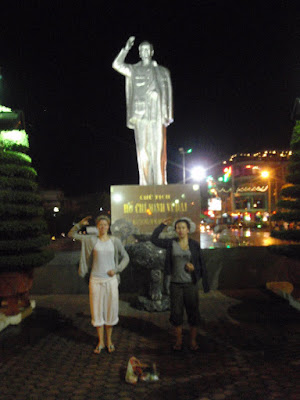