From late November to February (or late March of this year!) in Gunma, Japan, it is cold. Actually, 'cold' is an understatement. Take cold, pin it to a snowflake that's drifting on a subarctic current toward Antarctica, and let it land on the frostbitten toes of a polar musk oxen and you've got Gunma's 'cold'. Now some (cough, cough Austin) will be quick to point out that the actual temperature in Maebashi pales in comparison to that of Wisco on a daily average. True dat. However, in Wisconsin ya'll have such luxuries as central heating, insulated walls, airtight windows panes, carpet, and heated vehicles to transport you from point A to point B. I do not. Therefore, I spent the vast majority of my winter cooped up under my kotatsu (heated table; http://en.wikipedia.org/wiki/Kotatsu) watching all the TV shows I had forgotten existed in the US and eating for hours (and hours) on end. I spent so much time eating without moving, that I figured I should utilize this superb skill I had made somewhat of an art form. I ended up cooking with friends a bunch and even getting into some cooking classes. If you're interested, the visual regurgitation's are shown below!

Early on in winter, when we were still excited about it, Laurel decided to have a nabe night at her place. Nabe is the Japanese word for a hot pot with a bunch of ingredients in it. Everyone uses a slightly different broth and different ingredients, but we went seafood themed and had salmon, salmon eggs, lots of veggies, konnyaku, potatoes, etc etc. 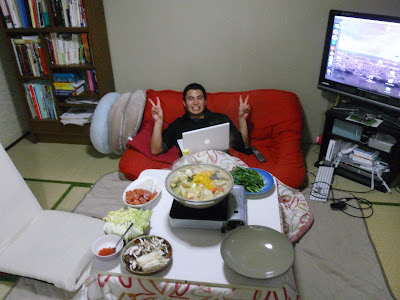 Laurel is also our resident chef and my personal culinary guru. She is more than willing to share her knowledge and experience with us and I think I speak for us all when I say how grateful we (and all of our tummies) are. Her birthday is conveniently in winter and eating together on people's birthday's is a given regardless, but she claims that she enjoys cooking so much that she even cooked for us on her birthday! Happy Birthday to who, now?
The theme was Mexican, because we are severely deprived of this incredible 'ethnic' food as Japanese residents. 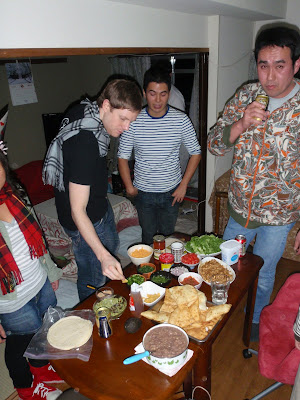 This was a dish Laurel cooked up that I'd never had before. More details to come. How I had never experienced such a Tex Mex piece of heaven before, I'll never know. But, I can guarantee there will be second and thirds. 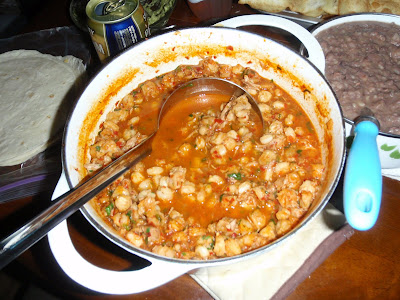 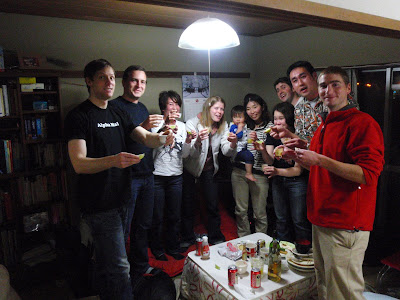 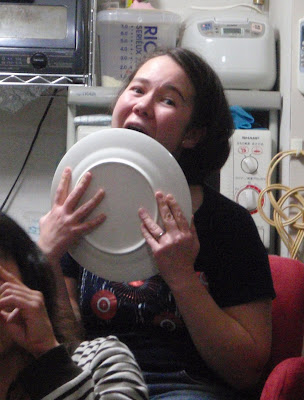 Or for Kristine, "pass out from complete and utter contentedness" good. 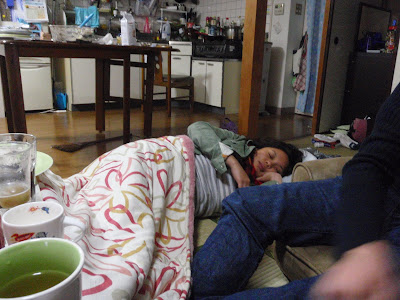 Takasaki is a city near Maebashi with a higher population and more foreign peeps doing more fun foreign stuff than Maebashi. One of those those fun things was a Taiwanese/Chinese New Year Cooking Class. I was all about it and even roped Kristine and Dean into coming too... it didn't take too much convincing, though. 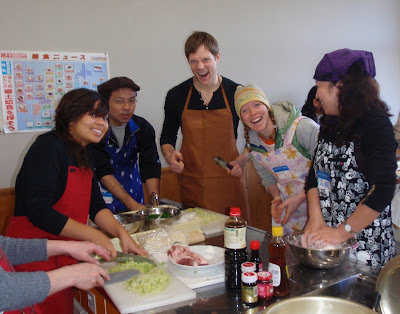 First, we made pork gyoza from scratch. Mixed up the dough, kneaded it, rolled it, sliced and diced proper sized gyoza shells and shaped them to stuff with the pork and spring onion mix. 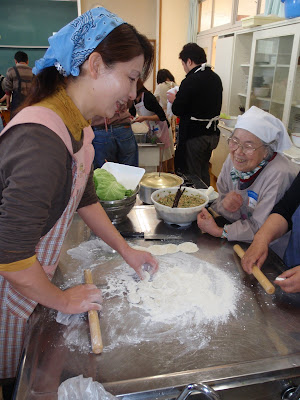 We also made a 'twice-fried pork' stir fry. Below is someone mixing that up, and the gyoza are boiling to the left. Usually, gyoza are pan-fried after being boiled, but I really liked them just like that, dipped in a little soy sauce. 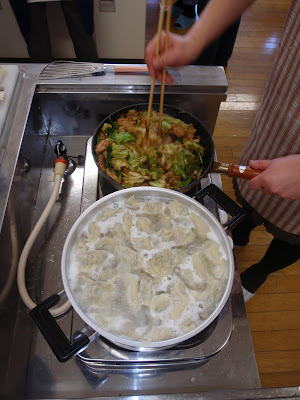 My group of Japanese, Taiwanese, Australian, and New Zealand representatives. Oh, and dessert, by the way, was 'annin tofu' or almond jelly pudding mixed with fruit and a sugary syrup. Sooooo good! 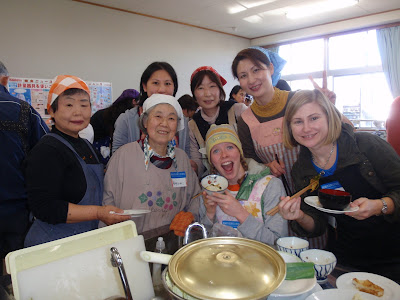 Below are some of my favorite people in the whole world. Shoko is on the left. I met her at the gym over a year ago now. She's always coming in to swim when I'm finishing up for the night. We always chat about our exciting weekend plans and vow to go hiking together, one of these weekends! Next is Keiko, who also is a member at our gym, but bashfully admits to only using it for the bathing facilities. She invited me over so we could swap Southeast Asia stories (she's been to Vietnam and Cambodia, amongst other places, as well). Keiko was the original connection to the final fine woman at the table, Mrs. Ohtani. Mrs. Ohtani is the spunkiest 80 year woman in the world and I couldn't be luckier to have met her. Our connection is long and complicated, but now we team teach at one my elementary schools together and hang out whenever I get the chance. Dean is not an old Japanese woman, but I did rope into our gym, so he was a new honorary member for dinner that night. The ladies made us a most traditional and wonderful Japanese meal to enjoy together. Mmmm! 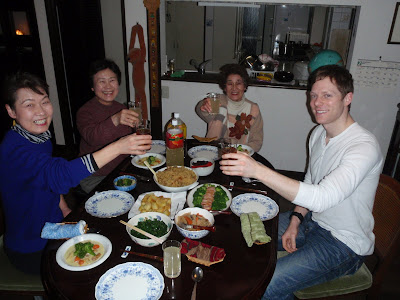 Another birthday celebration at Laurel's house, this time for Mischko. The theme? Greek! We made pita bread from scratch (a total feat in a Japanese kitchen!), hummus, tahini sauce, Greek salad, falafel, and Mediterranean marinated chicken. 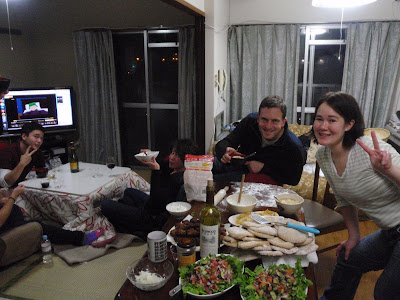 Of course, Brooke didn't let Mischko down and ordered chocolate cake for his birthday dessert. 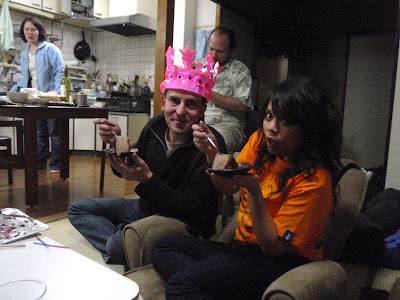 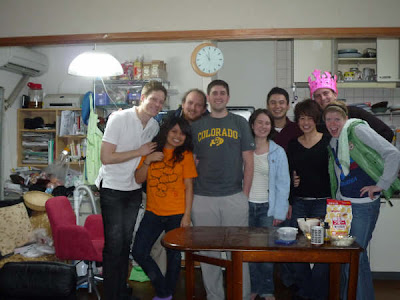 Salads, pickled eggplants, roasted chicken, and hands down the best Kalamatta olive bread I've ever had (and I don't even like black olives). 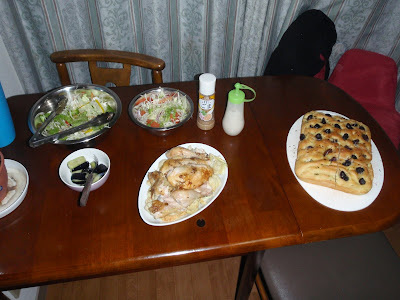 So, we almost always cook at Laurel's place because she's got all the fun/functional cooking goodies, the space to accommodate lots of people, and the resources to heat lots of people (refer to winter in Gunma intro to see why this is a necessity). However, Julie and I are planning a trip to Malaysia and needed Andy's expert advice, so I decided to host a 'breakfast for dinner' night. I learned how to make crepes (I'm making it my personal mission to popularize these in the US) and we threw in some pancakes too for a happy New Zealand/US balance. 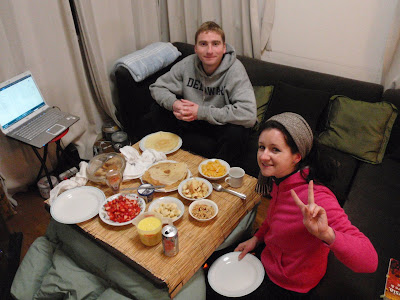 This was a Ghanaian cooking class I went to in Takasaki. Our top chef for the day was Georgina. Total sweetheart, but not great with the group time management so we didn't have time to fry up the dessert of plantains. 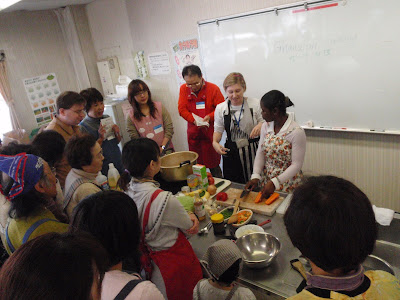 We did finish a yummy, well balanced salad fit for kings and a Ghanaian chicken stew with rice and the most delicious soy and fruit shake I've ever had. 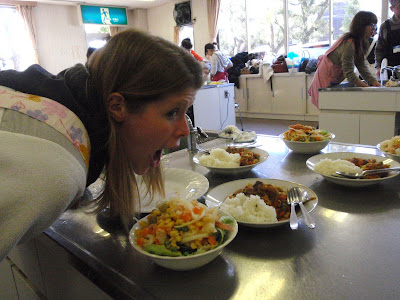 Julie, me, and the other culinary novices of Gunma. 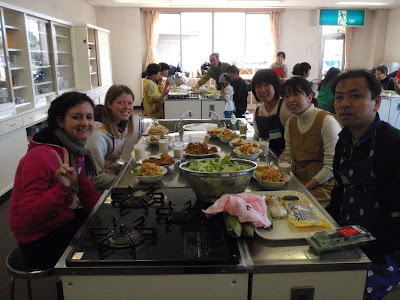 I think it's safe to say (fingers crossed!) that winter has finally come to an end here. I am excited to try some of these cooking skills out in my own kitchen when I can walk around cooking comfortably instead of getting everything pre-made and camping under my kotatsu for days on end, making a mad dash to the fridge here and there for another 'portion' of the meal. Happy cooking, ya'll and "Gochisosamadeshita" for the meals of this winter.
Posted by Sarah M at 5:17 PM