We got into Bangkok on our night bus at something like 1am. Frank headed straight to the airport for a 4am flight while I was left to wander the streets of Bangkok. Ironically, I happened upon 3 other ALTs (Assistant Language Teachers) from Japan looking to kill some time as well. Back on Koh San Road, we tossed back a few and planned our future as mates on Justin's boat trip around the world. I am the designated chef/deck swabber/massager. The best part is, he was dead serious about this endeavor and everyone was giving him crap for it because he's not doing JET next year in order to pursue this dream of his.
Anyway, they too left me around 6am, at which point I became a lone wanderer. I did however, get to see one last sunrise in Thailand! 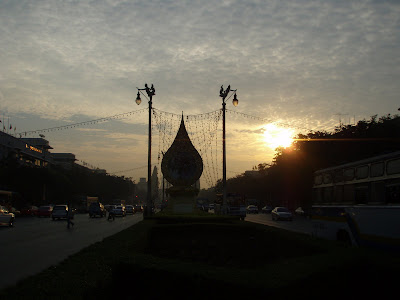 I roamed around some of the paths and areas I had been to before and tried some new tasty treats as well as the tried and true fresh fruit on a stick and grilled plantains I love. Check it out: monk on the road! 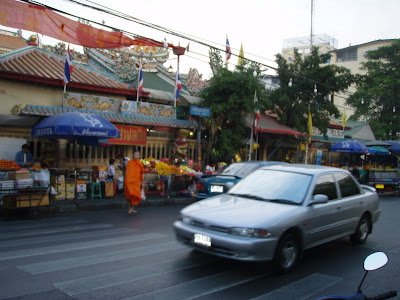 This area of Bangkok is known for it's magnificent flowers. 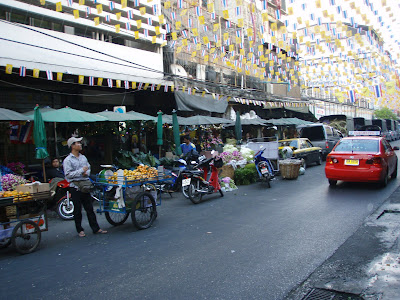 A great sight and smell in the early am to somewhat rouse me from the insomnia haze. 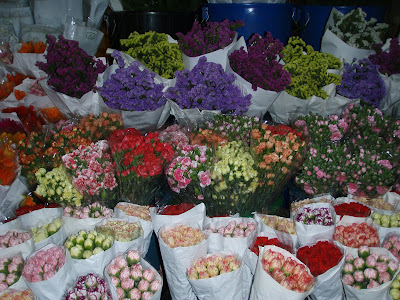 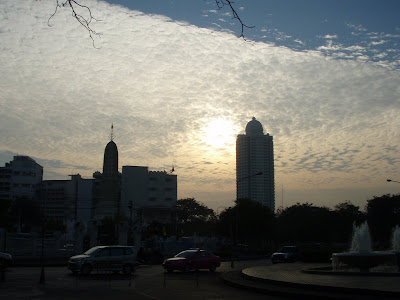 Bangkok's China-town: full of the most random collection of things to buy I have ever seen in my life. It kind of looked like my Grandpa's garage, with all the dirty metals and rusted tools and electronics in plastic containers covered in dust. Just like Grandpa, they too were asking way too much for their crap:) 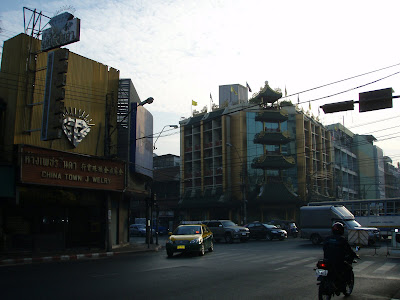 Despite Lonely Planet having recommended MBK as one of the must sees in Bangkok, I refused to use the time I had in the beginning to go shopping in a mall. It was one of the authors top choices for places to eat, but with street vendors on every corner, a food court wasn't exactly priority cuisine for me. With time to spare, I figured there was no harm checking it out now. Of course when I finally got there, it was closed. But, just for another hour. 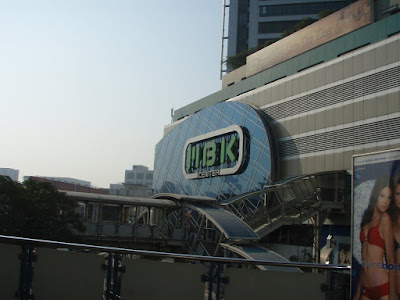 The mall was gigantic, and after all the street shopping we'd done and the little money I had left, I figured I may as well spend the rest of it on the few items I was eyeing up in Koh Samui. So, I was on a mission to find me the Heroes DVD's, some kind of corny work-out video, and running shoes... I found none of the above. Instead I ended up with incense, a watch, and ice cream. I'm sure for some, shopping in an air conditioned market similar to those outside would be much more appealing - but I kinda like the hot, sweaty, polluted hustle and bustle of the outdoor markets. Adds character. Anyway - I tried out the International Food Court as well, and it was as great as the author made it out to be. There were 10 different restaurants representing cuisines from around the world. The best part was that they cooked it all up right in front of you, so it was interesting to just walk around and see and smell the foods from India to the Mediterranean. I had forgotten how much I missed couscous until then. Mmmm. 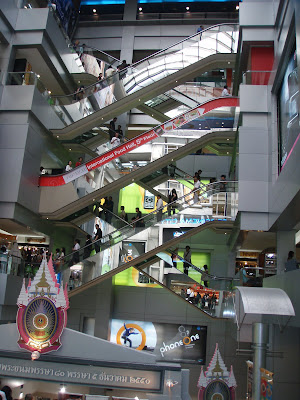 So, I guess ending the trip in Thailand with consumerism was somewhat representative of my vacation. I had a great time with friends and got to see and do a lot of what I hoped to do. BUT, I did feel like a selfish, disgusting tourist at times, adding to the commercialism and pollution that has dramatically changed the landscape of Thailand. Tourism is a very important aspect of Thailand's economy and being one of the world's poorer nations, I suppose I was somewhat helpful for their economy. Since tourism is so popular and important, I'm not denying that what I did is part of the "real Thailand"... but I definitely found myself wanting to "get off the beaten path" a lot more. My impression of Thais was great and I found myself thinking "Wow - I can't believe sooo many Thais speak such great English! However they're teaching here, Japan should take note!", but then I realized all the Thais I was interacting with needed to speak English for their jobs. My interactions with the people and the land were so limited. I'd love to get back to Thailand at a different time of year with more time and less travel buddies and do it different. Until then, I'll look back on this experience with a smile on my face and place in my heart for Thailand. Khawp kun ka, Thailand... khawp kun ka.
Posted by Sarah M at 8:40 PM

Hi Miss Sarah...Just wanted to drop a note to say hi and let you know we think about you often and I keep up on your posts...I must say the food selections wouldn't work out well for me...Where's the chicken?? :)

Looks like you are having a blast! We miss you!