It was New Years Eve Day in Ko Samui and after a killa night's sleep on the most comfortable cot of a gorgeous hotel, I woke up early wanting to seize the day. As per our plan, I roused Gopika and Frank out of bed, too. First things first, we rented us some motorbikes! Props to both Gopika and Frank for volunteering to drive... but I can't lie, riding on a bike with Frank was quite possibly THE scariest experience of my life. I think I was pretty good about being supportive every time we ran into a curb or almost clear off the road, but inside my heart was beating a mile a minute. We drove around awhile just trying to get a feel for the bikes before stopping at yet another travel agent to book up the things we wanted to do in/around Ko Samui. 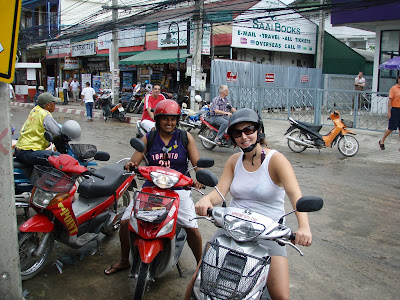 After stressing from the near fatal bike rides and attempting to book things for the next few days and transportation back to Bangkok (as the end was in sight:( ), the beach was the most logical place to go and relax. Ko Samui has a gajillion beaches, but the one right by our hotel (Hat Chawang) was supposed to be one of the best - so back we went.
It was great temperature outside and the ocean was sooo perty - but the jet skis were a bit unnecessary in my eyes (and ears). 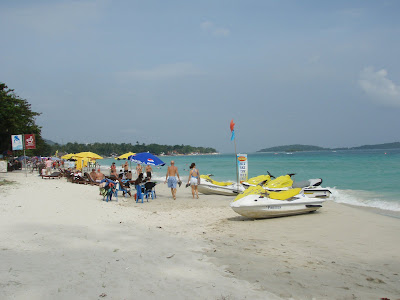 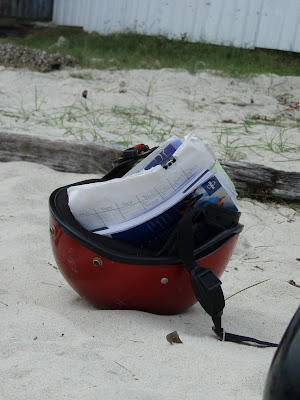 We attempted to make a plan of attack with the time we had left in the day. We used this not so convenient map that I'm pretty sure was bigger than the island itself. Nice work Tourist Association of Thailand. 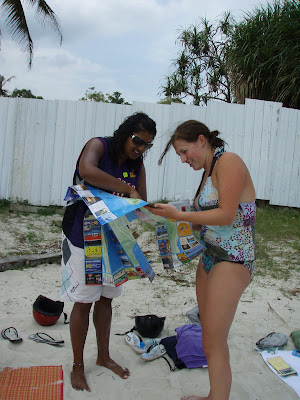 Back onto the bikes. I still wasn't too anxious to drive, and Frank seemed to be getting the hang of it... that was, until we decided to stop for lunch in a tiny market place and I hopped off so she could pull a U-ey to park in front of the area and instead reved up the bike and ended up sliding across the road on her side. Gopika and I kind of just stood there, stunned for a second while a Thai woman ran up and immediately started putting iodine on her. The workers became a little quieter around the area, but picked up pace again in no time. Frank was laughing and reassured them that she and the bike were fine. She told the woman to please stop putting iodine on her, those were old cuts she was putting it on now. After the woman showed us her own wipe out scars she left, on a motor bike. The best part was that Frank was not concerned about the bike, or her own cuts, but whether or not the iodine was permanent and would leave marks on her legs for New Years Eve celebration. Because clearly that would be the most noticeable in a dress and equivalent to a scarlet letter.
Anyway, I convinced the girls to try some street market food. I had yet to try some "authentic" curry soups. I liked it, but apparently they weren't too keen on the idea of having random chicken bones and skins in their food. 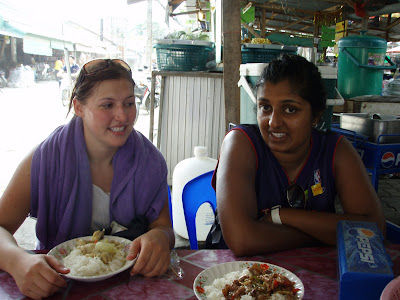 After lunch, it started to drizzle. There were a few waterfalls on the island so we wanted to make it to one of them. The closest one was maybe an hour and a half bike ride away. After Frank got the hang of biking (for real this time), it was a really enjoyable ride. It was an incredible feeling to be on the back of a bike taking in the all the sights. We stayed on the main road the whole time so we didn't get completely lost and end up missing New Years Eve altogether. Yet, it still felt like we were doing our own thing on this far from secluded and still amazing, island.
It started to rain a little harder, but we were still okay for driving. We made it to base of Nam Tok Na Muang waterfall in the center of the island, passing ATV outstanders and elephant ride companies en route. I had my heart set on hiking the 1.5km to the upper falls for the view of the sea, but the rain was making us all nervous and we were pretty sure we would get stranded there with no way back if we chanced our luck.
So, we took a quick dip in the lower falls and Frank cleansed her wounds. 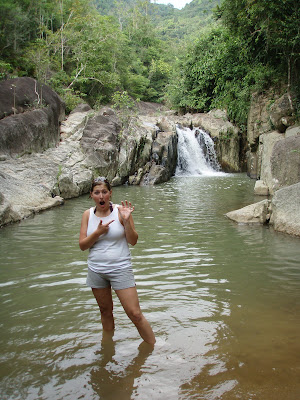 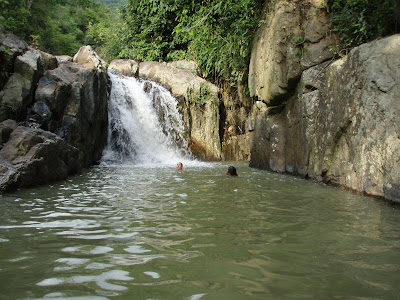 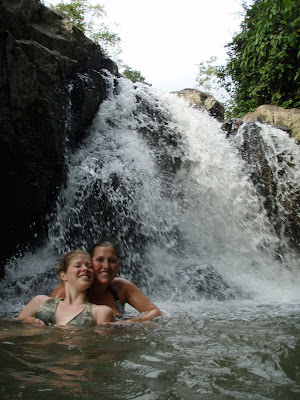 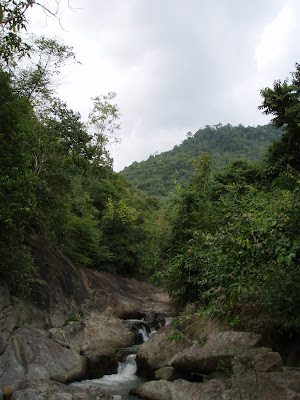 I decided I'd give driving a try. I apologized to Frank for having given her any crap before for her "reckless" driving. It was way tougher than I thought - but I did love it once I was under control. That's until the predicted storm hit. We pulled off a couple of times to wait it out because we were essentially blinded. It never actually stopped, but we figured we might as well wait on a beach. So we snuck through this ritzy hotel's lobby and walkways, stood under a few unsuspecting clients roofs, then hit the beach. We had it all to ourselves! 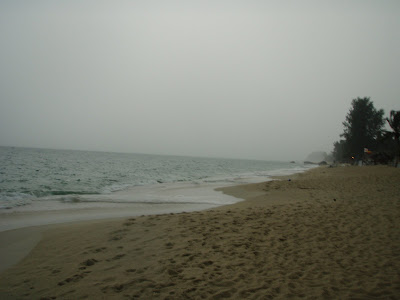 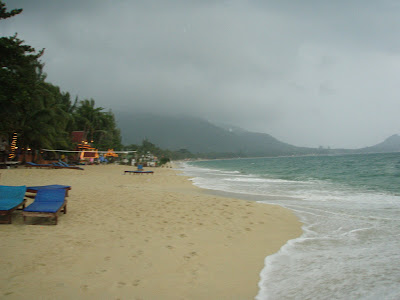 Now, half the booking that morning was dealing with transportation to a nearby island called Ko Pha-Ngan. The whole reason we booked this place for New Years was with the intent of going to this raging full-moon party on the neighboring island complete with over 12,000 ravers turning up to dance, drink, and smoke the night away. Not exactly my cup of tea, but something I wouldn't mind standing in awe of. But as the rain became heavier and refused to stop (we were seriously driving through 2 feet of standing water by the time we made it back to our hotel) we agreed it would a pretty miserable experience in a monsoon. All except for Frank who was ready to rock that party, rain or shine! 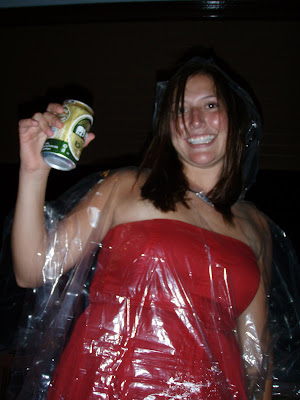 Not wanting her to get messed up on the crazy island mushrooms all by her lonesome, we convinced her to stick with us on Ko Samui. It was no Ko Pha-Ngan, but I think a good time was had by all on New Years Eve... 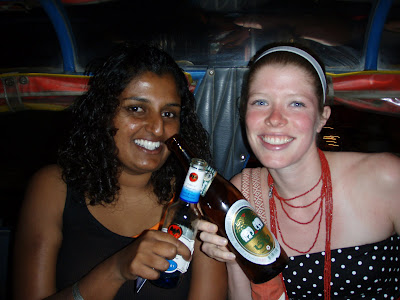 ...Except maybe for this guy, who I asked to take a picture of us (unknowingly) as the clock struck midnight! Whooops. 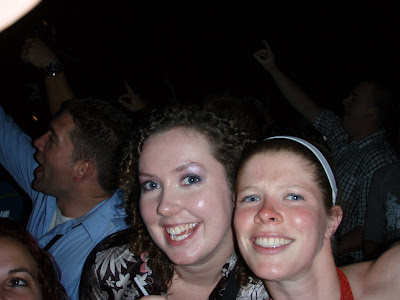 The Green Mango was our rendezvous bar and it was live with pop music, hot tourists, and buckets galore. Happy Belated New Year, everyone!!! 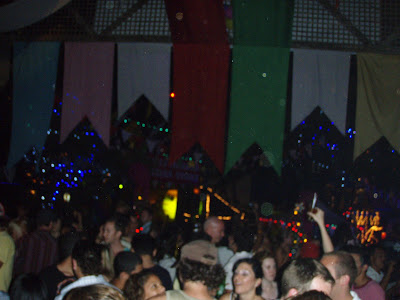