Finally! A blog about Japan!

Well, it's been four months now since I've made it back to familiar territory in Japan, so I think it's about time I finally write a blog about it! Blogging about Thailand took much longer than I expected and believe it or not, I actually did try to spread the entries out as to not be so overwhelming... which I hear was not so successful. Anyway, I hope to actually catch up to current time somewhat soon. It shouldn't be too difficult since most of the winter involved weekends cowering under layers and layers of blankets, or my kotatsu (heated table) watching streaming episdoes of Nip/Tuck and The L Word or attempting to talk with friends and family on the not so impressive Skype. Needless to say, I won't be blogging about that (anymore).

So, Japan. As if Thailand wasn't adventure enough for Ms. Frank, she planned and budgeted a trip in Japan as well! I was pumped to get to show her around a little bit and see some new places as well. Despite popular belief, I actually do have a job and had to be there during the next week - but, that still left us the first weekend we arrived in Japan after Thailand and the next weekend after she went down to visit her Aunt in Kyoto.

Frank was on her own for her first night Tokyo, Japan because of our different flights out of Thailand. While I was sleeping in an airport in Taiwan, she was living the backpacker life, meeting new people at a hostel in Tokyo and partying at night. I arrived just in time to go Round 2 with her for another night in Roppongi. But first, we eat! Our first dinner out was entertaining, seeing as none of us speak Japanese and Katie was having her first go at using chopsticks. Can't remember this guy's name... I think he was from Czechoslovakia or something??? He was a chopstick pro from his travels in Korea, so he taught her a thing or two. 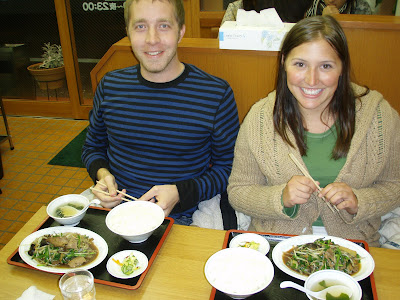 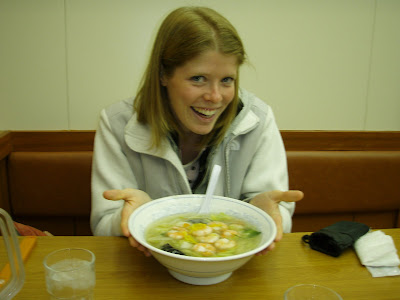 Frank had talked to a few people who had gone on a roller coaster in Tokyo Dome City. She quickly became obsessed with the idea of riding it too. So, we ate, rallied the troops, figured out how to get there, got there, and by that time it was closed. Frank was not so happy. 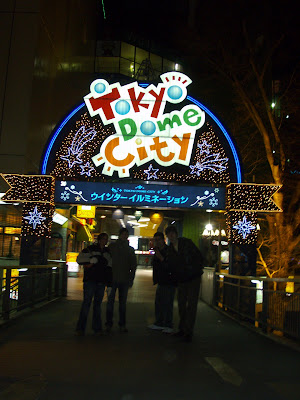 But at least we got to see these adult men riding arcade horses like there's no tomorrow. And drink out in public (always amuses me). And go to a reggae bar in Roppongi. And go to Gas Panic. And stay out all night long. 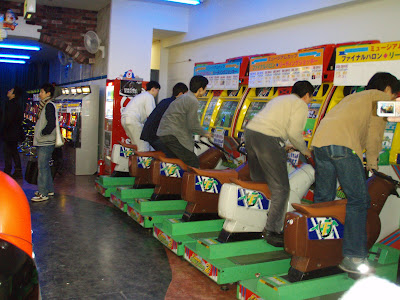 The next day I made Frank get up extra early so she could actually see an area of Tokyo other than Roppongi. First, I took her to one of my favorite shrines (Meiji Jinguu). It's got a big 'ol torii, and the wall of sake, and of course the shrine, but I really just like the walk to get there. It's through a beautiful forest and the lighting was magnificent that day. It was also right after the New Year, so there were tons of Japanese visiting to give their blessings for the new year. These lanterns were also hung for the New Year. 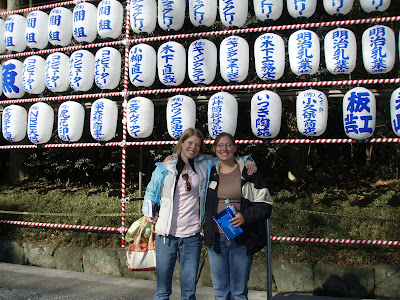 This kid was so amused by the pebbles on the walking path... it was adorable! 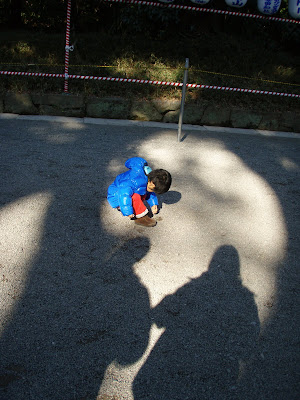 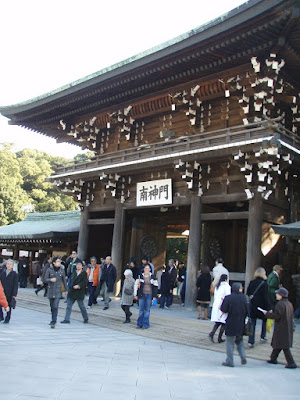 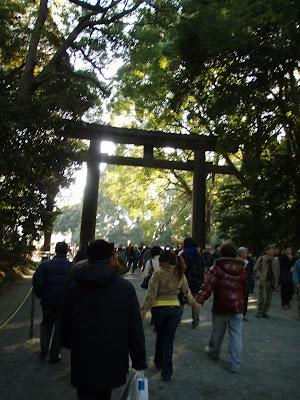 Out into the daylight of Harajuku. In addition to the typical Harajuku goth girls, we saw this guy! Frank wouldn't let me hug him:( 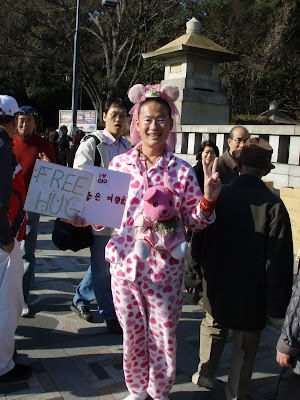 But she did convince me to buy some cool art... not from this guy though. It was another guy that was painting, and there were a few that were really awesome. I asked him (in my broken Japanese) if he paints all the ones he had displayed himself and he said 'Yes', so I got my favorite one. When I got home to take it out of the plastic sleeve and hang it up, I realized it was totally a computer printed copy. It was sad. 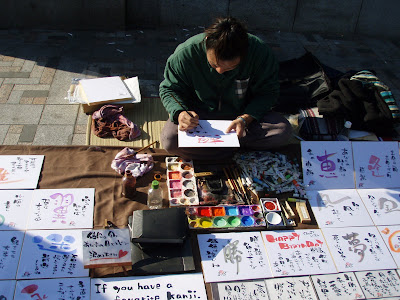 Next we headed to Omotesando Hills, where Lonely Planet claims it's "the closest Tokyo gets to Paris". I don't know about that (having never been in Paris), but it is pretty entertaining just to walk around and stare at all the pretty things. I also got yelled at from an employee at Harry Winston for attempting to take a picture of a ring. Man, rich people sure are uptight. Check out the video below for a scan of the street. 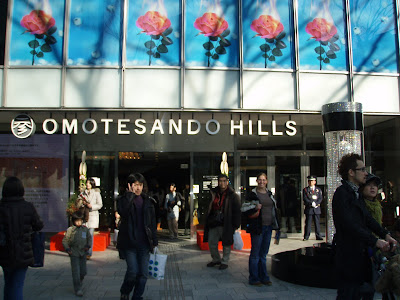 Somehow Frank managed to find a super cute purse she could afford, so we rejoiced about that for awhile and then went for lunch. Finding an affordable lunch was as difficult as finding the purse, but we did end up at a cute little Japanese restaurant. They had the plastic models in the entrance to the restaurant, so I thought we could just ask the waitress to come look and we'd point to the ones we wanted. I didn't realize I didn't know how to say "Could you please come with me out to the plastic models so I can show you what I'd like to eat?" and just felt far too rude running outside while she was trying to take our order... so, we just pointed to pictures in the menu. It took us about 30 minutes to choose something from the menu, after which we pointed, and she said our choices weren't available (no idea why). So we just said "anything is fine". We were pleasantly surprised with our awesome set meals. This was Frank's first go at udon noodles and miso soup, vegetable tempura over rice, salted tofu and pickled radish. In one day she managed to basically master the art of chopstick usage. 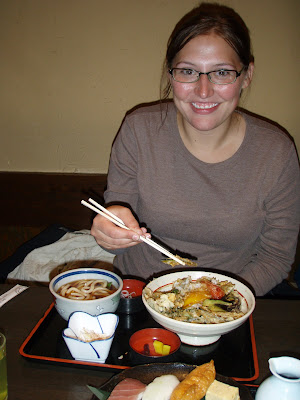 Next up on the agenda: a trip to the Tokyo Metropolitan Government Offices to get our free view of central Tokyo from the observatory floor in the North tower! It was closed. 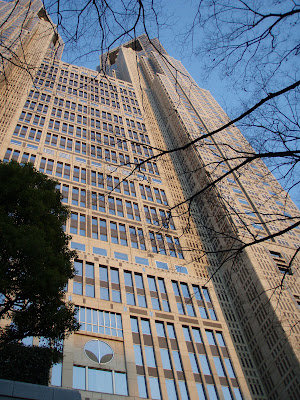 Back to the hostel to grab our gear and take the long trip back to Maebashi for the night. You can just imagine how fun it was to carry all our gear from the Thailand trip and Japan through the metro subway and JR train systems back home. Pretty sure Frank hated me after that, but my pocket book loved me! 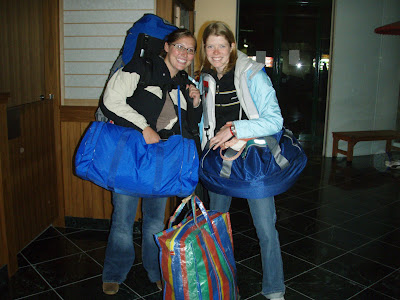 On the JR; before people got off so we could sit down. See, my strategy was to keep to warm however we could in the bitter cold. She was missing that warmth that night, laying in my icebox of an apartment. Even with my AirCon (wall heater) on full blast and 4 blankets wrapped around her, I found her with gloves and a beanie on the next morning. Welcome to winter in Japan! 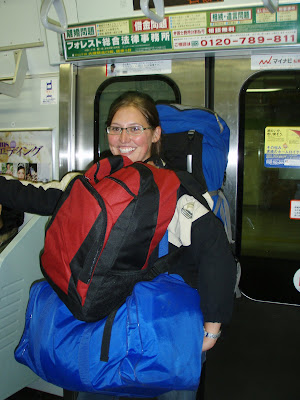