Take 7: Crusin' in Krabi: A day of island hoppin

After 12 hours on a night bus, getting the least comfortable "sleep" of my life, we had finally arrived in Krabi from Bangkok. It's about 1000km south of Bangkok, as you can see from the sweet map I've included below. 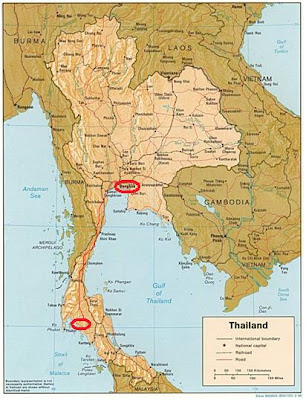 I was pretty happy when the sun rose on the bus, since I wasn't really sleeping anyway (but at least there were some pretty lame movies playing to keep me distracted). The sun allowed me to see all the gorgeous scenery we were passing. There were trees (unlike in Bangkok) and red earth carved out of the hilly terrain. We didn't have this front seat the whole time, so when a few Brits hopped off at a stop, Frank and I were allll over it! 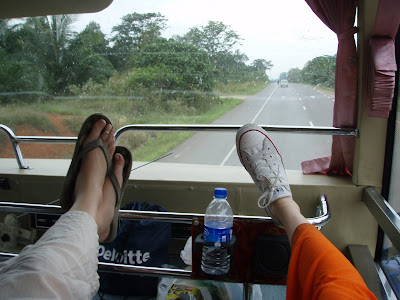 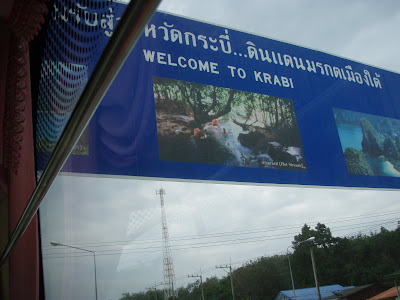 We arrived relatively early into a port, but then still had to take a mini-van into the city. We weren't actually staying in Krabi town proper, but on the outskirts on Hua Hin Beach. We found that out two days later when we told these guys we'd meet them at the "O'Malley's Bar" in Krabi. They went to the O'Malley's 5 minutes from our hotel - we went to the O'Malley's 30 min from our hotel in Krabi-town. Whoops! Anyway, I really dug our location, because the beach wasn't too crowded and there weren't markets down every road or convenience stores every two feet (you had to walk a good 100 meters to get from one convenience store to the next).
After we finally sorted through our agenda's for the next few days and booked what we could for the only 2 full days we had here, we made our way to the beach to RELAX! Finally!
It felt GREAT to take a dip in the warm salt water and just lay out. The one and only time that would happen this trip. 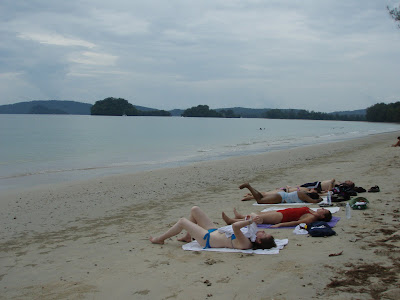 Oh, and I may not have mentioned this before, but Jenny actually made a few appearances throughout the trip. She wanted to be there the whole time, but you know, flight complications, yadda yadda yadda, inhibited that. Here she is though, in her party gear, rockin out on the beach with us! Good to see ya, sis! 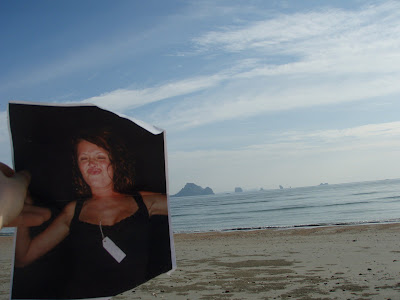 Now, I apologize first and foremost to Frank for this 'less than flattering' picture (because as the unofficial paparazzi of most occasions, I tend to take pictures when people are least expecting it) - BUT, I had to include it, because I'm pretty sure it was the best meal of the trip. It was cheap, delicious, and cooked by the sweetest woman we met. It was right off the beach and we ate at the only table she had to offer. She was running her own salon and restaurant, just trying to make a living. She gave us a rough overview of her life as she made the chicken fried rice for Katie, and my delicious clear noodles lemongrass tofu soup. Afterwards, she gave us the most delicious fresh fruit. 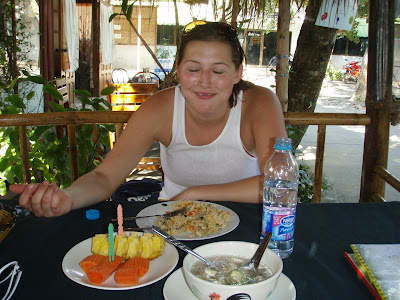 To end the day, we went to the "Hippie Bar" on the corner. Buckets were drank, card games were played, Christmas songs were butchered in front of the faux Christmas tree, and fire dancers entertained us in between the chaos. 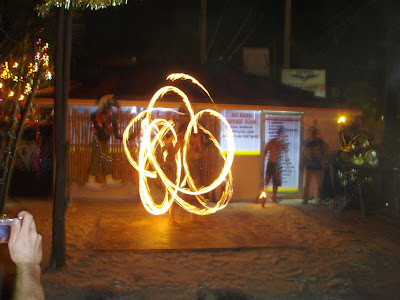 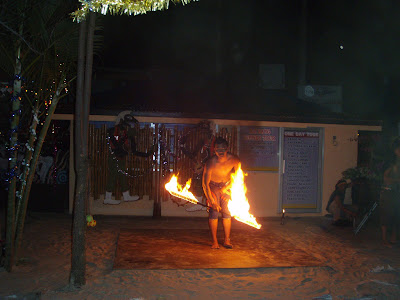 The next day we got up bright and early to get our transportation to our speed boat for a day full of island hopping. 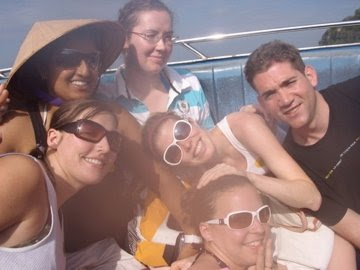 It was a gorgeous day out - hot enough to sweat out some of the previous night's damage when we stopped to rest and make the water refreshing, but not excruciatingly cold. We made 7 stops throughout the day, but I really enjoyed just gazing at these karst rock formations spotting the ocean. It looked at as if some giant just thought the Andaman Sea looked a little too serene; so he crumbled up a big boulder he was kickin' around and sidearmed it along the shore. Over the years, some green managed to latch on to the crumblings and make for something truly interesting scenery just waiting to be gazed at. Lucky me to be able to see this giants mistake! 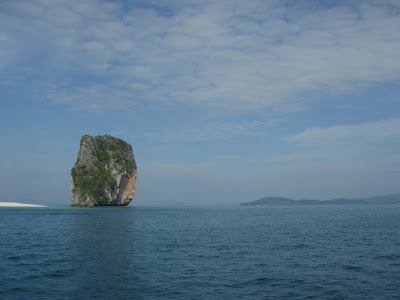 This is a snap of "Chicken Island"... can you see why it's named that? You definitely have to use your imagination. 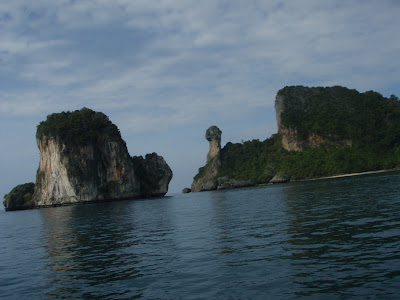 Two of the seven stops were for snorkeling. Snorkeling is one of my favorite things to do, ever... but I'd be lying if I didn't say that this time it was a little disheartening. The majority of the reef was damaged (to be expected in the most popular tourist areas in Thailand) and there was visible garbage at the bottom. Surprisingly, some marine life still flourished - the highlights being one shark and several long swordfish at the surface which were easy to miss if you never looked up.
The highlight for our tour guide I think, was when I, as the last passenger coming on board, dropped my facemask in the ocean. I tried to grab it as soon as I dropped it, but no luck. I asked frantically to borrow her mask to dive down and get it, and she was all, "are you sure you can do it? You know how to dive?" I was like, sure, it can't be that tough - it's a bright blue mask and there's hardly any reef down there! I knew they were in a rush, but I reallllllly didn't want to get stuck with a face mask replacement fee - so I took the biggest breath I could, dove down, and stayed down until I got it. I surfaced to find almost the entire boat looking and cheering for me. My head and ears hurt a little bit, but I'm pretty sure it was worth it! 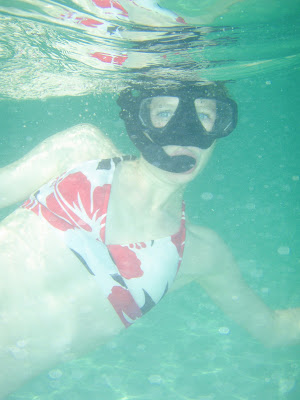 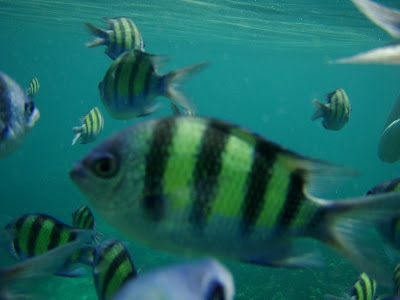 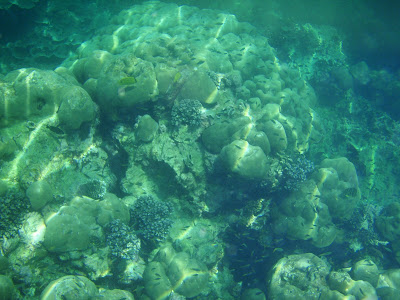 Another one of the stops was "Monkey Island". You can see why. 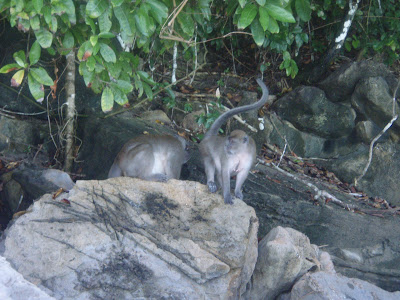 They were soooooo cute, but I was absolutely disgusted by how people were treating them. In particular, there was one Aussie family that was shoving bananas in some of the monkeys faces, and the little daughter was throwing chunks at them. What I assume was the Daddy monkey looked pretty POed, and part of me really wanted the monkey to thrown down. He didn't though, and he just sat on the rock, with what looked like anger in his eyes. 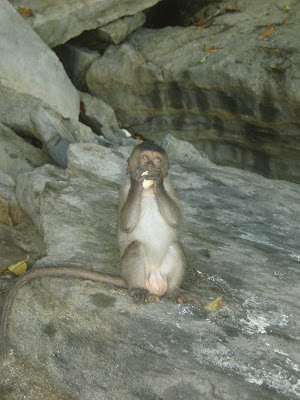 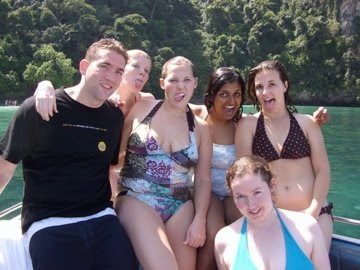 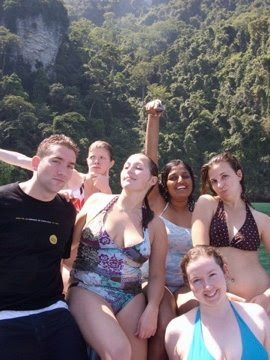 Off in the distance is a longboat, which are the most common, cheapest way of transportation, but much slower. 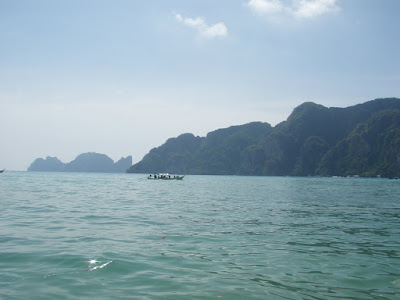 This is the infamous island, Koh Phi-Phi Don, where much of the movie "The Beach" was filmed. All we had time to do was stop there for a buffet lunch, which was pretty tasty I might add. 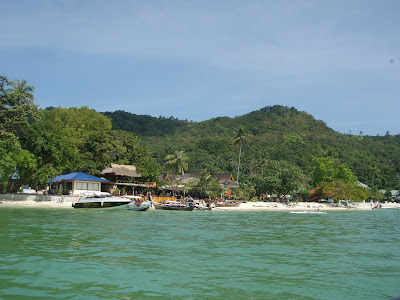 Cruising along some other touristy sites, here is a cave that is known for it's popularity with Asian pirates back in the day. Today, it is an area where people raise some specific type of bird for their eggs which they can sell for a large profit to be used in a particular type of soup. Namely in China, I think. 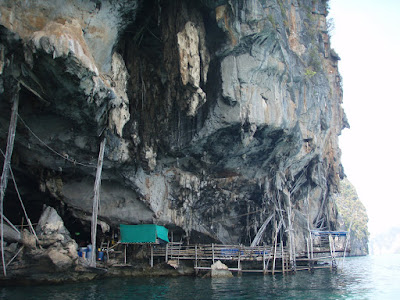 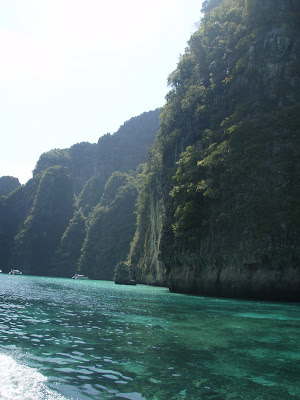 Op, and here Jenny is again, on the actual beach where The Beach was filmed. She wanted to show ya'll those big guns while she wandered amongst the green of the island. She only had 30 minutes to "wander" this island though, so she didn't get very far. 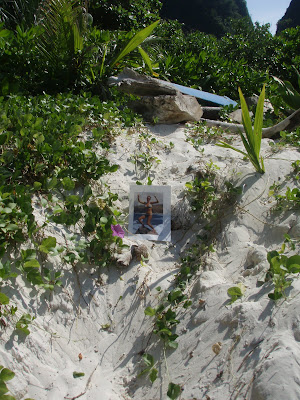 On the boat: it was windy! 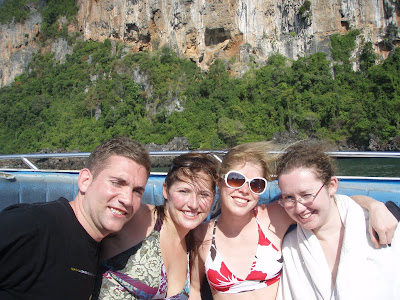 Okay, not that any of you really know Sioban too well - but I think this picture pretty much sums up the bliss that was riding on this boat throughout the limestone rock formations. 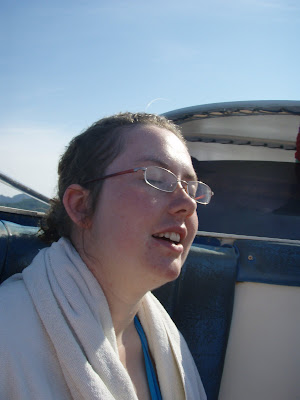 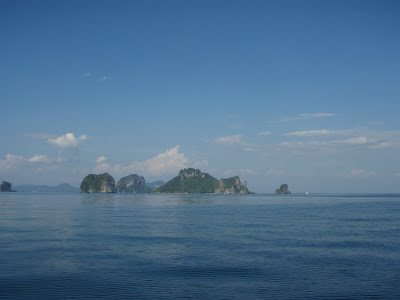 All the longboats, stored up for the night. 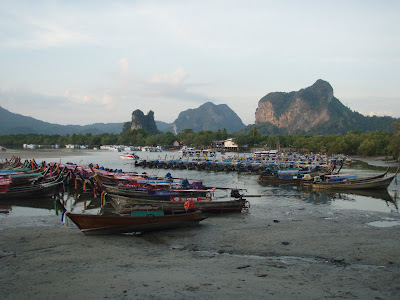 And the gorgeoussssss sunset - hands down the most beautiful of the trip. I seriously can NEVER tire of sunsets. I can't get enough, and they are always impressive. I can remember a time freshman year of high school when we had to do some writing assignment. I ended up writing about how beautiful Wisconsin was, and how I never knew there could be pretty sunsets in Wisconsin. I remember truly believing that. My teacher was shocked asked why I thought that. I couldn't figure it out. I realize now, that so much of my childhood was spent looking at sunsets on our vacations, in Florida, in South Carolina, in California - essentially on the coasts. Maybe I never thought that sunsets could be pretty when you're not on the coast. Maybe I thought you had to go far away for things to be pretty. I had a realization then, though, that Wisconsin is not only pretty, it's gorgeous! And so is every part of this world. After all, beauty is in the eye of the beholder. But, the mirage of colors, the limestone cliffs, the nuance of a new location never hurt:) 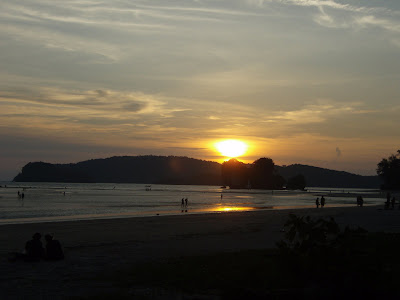 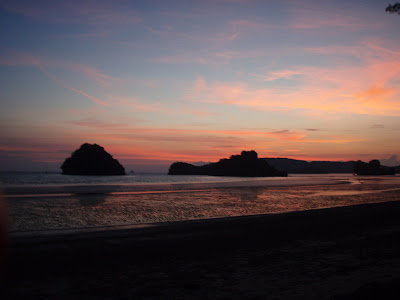 The best way to end a day is with a run on the beach - fannnnnnnnnntastic! 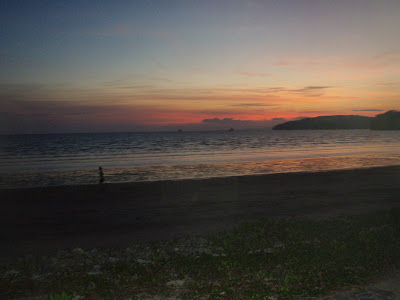