So, it was after Christmas but before New Years when we were scheduled to embark on our next commute. This time we were moving from the beautiful, relatively quiet and refreshingly less touristy location of Hua Hin in Krabi province on the western Andaman Sea coast, to the island of Koh Samui off the eastern coast in the Gulf of Thailand. 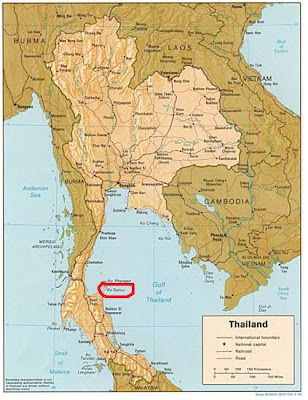 Unfortunately, this meant we'd have to leave the most sincere, helpful, and kind person in the world! Joey may have lost a finger due to a "snake bite", and he may be a member of the Thai mafia, but he hooked us up with sweet accommodation, special deals, and rides anywhere we pleased (at his friends expense). You were and still are missed, my man! 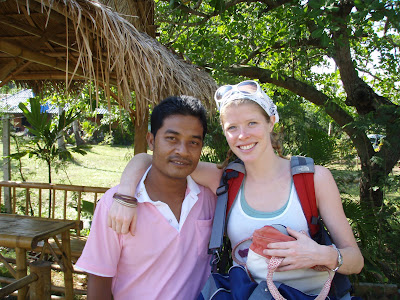 A scene all too familiar... waiting for a bus. This one was like 4 hours long. 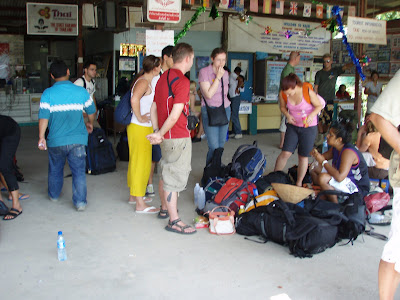 From the busssssssssss - to the ferry! It was packed to the max, but we managed to squeeze in on the deck which felt great after hauling our bags around in the heat. 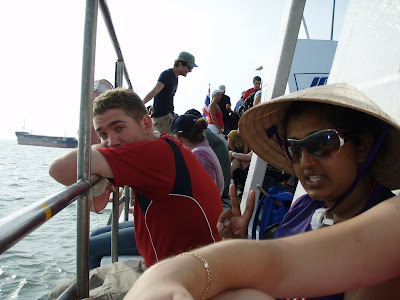 Once we sat down though, there was no movin'... for the entire 2 hour ride. Except for the guy that decided scaling the railing was worth the risk for a few beers. 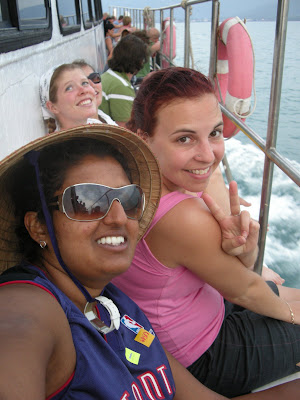 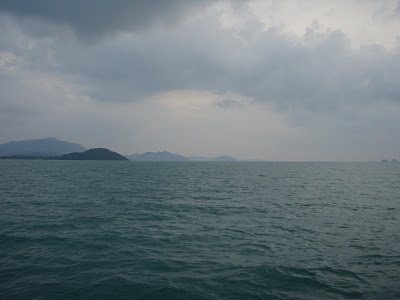 And because I love them so much - please enjoy this montage of pictures of the one and only sunset we saw near Koh Samui. 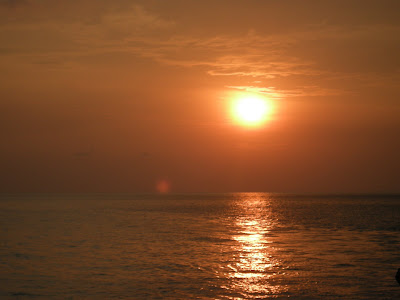 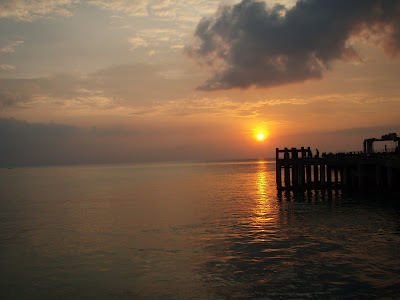 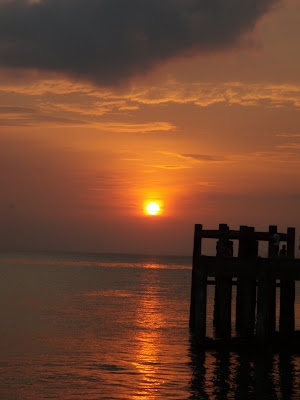 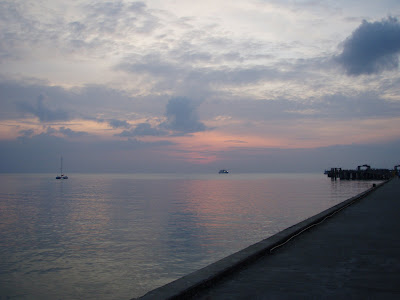 Koh Samui was the only place we actually had reservations for a hotel. I justified "splurging" on the place, since it was peak season and all suggestions exclaimed "book ahead of time for New Years or you WILL be homeless". We weren't really sure which pier we arriving at. It was the one located on the absolute opposite side of where our hotel was. The taxis/open air vans were asking for a ridiculously high fee to take us there, and since everyone was getting off the ferry at the same time, we figured we could wait it out and talk someone down. Fewer and fewer cabs were pulling up and we were within minutes left with daylight (after which taxi fares double or triple), so we just all squished into the last van there which already had a few too many passengers. Gopika and I had the privilege of riding on the back, letting the wind blow through our sweaty unshowered hair.
Some were ready for a burger and fries but I was jonesin' for some fresh seafood, so we split up for dinner. We got our first taste of the Koh Samui "nightlife" as we strolled for food. Shop upon store, upon shop, upon store upon convenience store, upon massage parlor, upon travel agent... upon store. It was soooooooooo commercial and all looked the same after a few blocks. I was just super sick of that scene after Bangkok and was really hoping to NOT eat an Italian pizzeria or Irish pub or American burger joint with 500 other tourists. We walked, and walked, and walked some more. Finally I asked a guy that was trying to sell us suits to recommend us a place with good, fresh seafood off the main drag. He recommended a Mexican place. I insisted that I really wanted Thai seafood, please. He said, "come with me". After a shady walk through a few dark alleys, passing some dogs, groups of loiterers, and garbage bags, we emerged into the spotlight of a row of restaurants like this! It was perfect! Now we just had to choose what to eat. 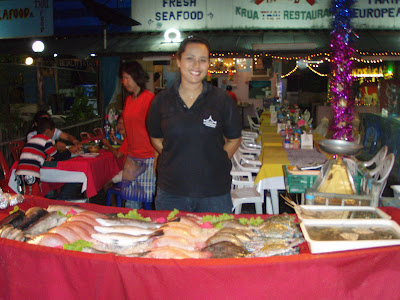 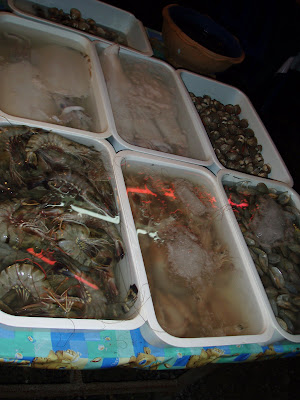 As tempting as it was to go with the 2 dollar seafood pad thai... we opted for a more elegant meal for our girls night out dinner. Not being much of a seafood connoisseur, I had no idea which kind to get. I know I like seafood, but I never remember which fish I like or which flavors. Not knowing the price or the size, we just went with the waitresses recommendations of red and white snapper. Each had a different marinade as well, so we figured we could do a taste test switcheroo to be be completely satisfied.
It was taking quite a while to come out, but we had our fruit smoothies and comfy weather to chill in. Turns out they were preparing the whole freakin' fish for us! 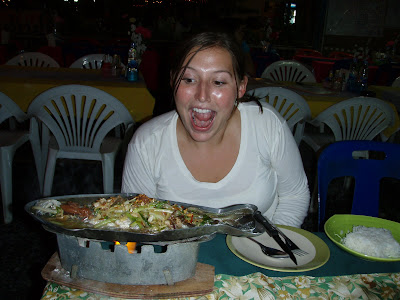 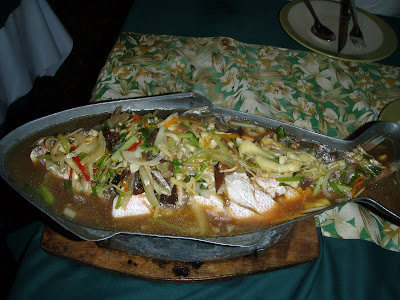 The burner underneath kept the marinade heated and the fish moist... easily the most moist, delicious fish I ever eaten. It was massive! But it was farrrrrrr too good to waste. 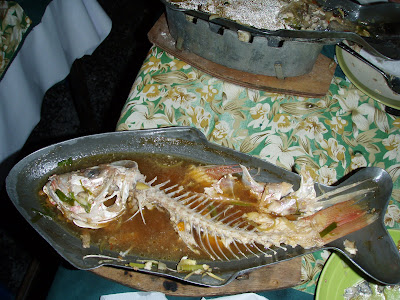 ...Any of it! Especially on a dare!
Not only did I finish mine, and half of Katie's... they followed up the dinner with a plate of fresh fruit, which is impossible to refuse even on an exhausted, bloated belly! The meal was spot on and cost about $15 (with rice and smoothie), which was the most I paid for a meal while in Thailand. So worth it! 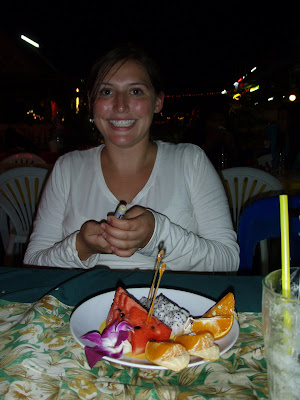