I love summer. I love the sun, the heat, the holidays... I love summer. One of my most favorite parts of summer in Wisconsin are the festivals. I love the people, I love the food, I love the drinking, and I looooove the music. Festivals in Japan are awesome, but they usually lack the music component. So, when I heard about a three day long music festival in Gunma, I was first to line up at the conbini (convenience store), attempt to buy tickets from the clerk, get rejected, have to ask Brooke to go back and help me, and get tickets for the July 25th-27th extravaganza. I was originally planning on attending all three days of the fest and doing the camping and being broke thing, but the line-up this year turned out to be less than stellar. So I decided to only shell out for one day (which was a still a ridiculous 170 bucks) and choose the day with the best lineup.
It's a pretty big deal, this festival is. Over 100,000 people attended in 2005. There are over 200 Japanese and international artists that play on 7 main stages and several smaller stages throughout the grounds. In the past, artists such as The Red Hot Chili Peppers, The Beastie Boys, Coldplay, Chemical Brothers, The Cure, Fountains of Wayne, The John Butler Trio, Joss Stone, Mika, The Shins, The Strokes, Franz Ferdinand, Jet, The Raconteurs, Snow Patrol, The Hives, KT Tunstall, The Scissor Sisters, Gnarls Barkley (and the list goes on, and on) have performed (to name a few). It reminded me a lot of Summerfest, except instead of smelly Lake Michigan there were the beautiful Japanese Alps, and instead of paved walkways there was grass and rivers, and instead of drunk teens throwing up and overflowing garbage cans there were polite hippies, segregated garbage bins for recycling and reusable utensils and cups for drinking.
The fest takes place at Naeba Ski resort which is up in the mountains of Gunma just before crossing over into Niigata prefecture. I'd been there in winter to ski, but the area looked incredible with all the lush summer vegetation and millions of hippies walking around. 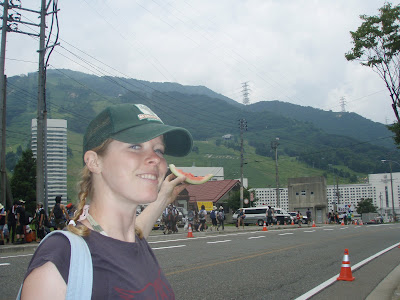 Yes, the hippies. There was a much different crowd there than I'm used to seeing in Japan, but it was really refreshing and cool. Ahhh, music appreciation lovers. 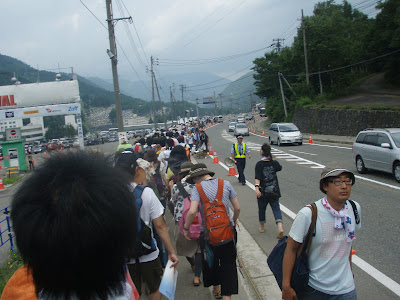 As you can see, the place was PACKED! 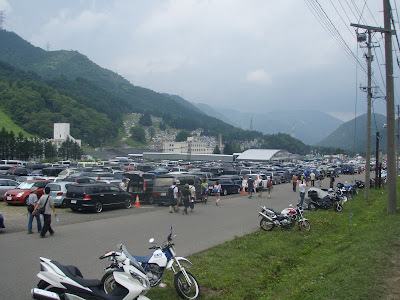 I convinced Nori, Kristine, Ali, and Annie to come. 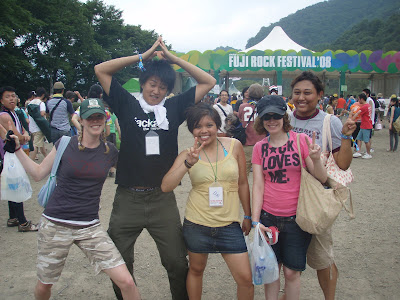 Heading into the festival... 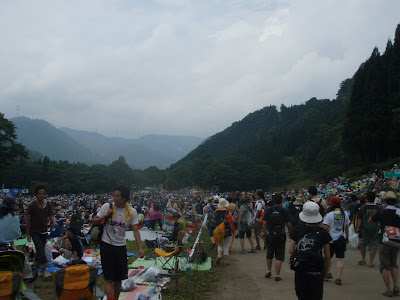 Jason Mraz was the first act we saw; I was impressed! The guy's got an amazing voice and does all this other crazy stuff with his mouth that I can't even describe. A decent set (albeit a bit slow for the early mornin') and an awesome closer where the band took a few Polaroids of themselves and then threw it into the audience. Genius! 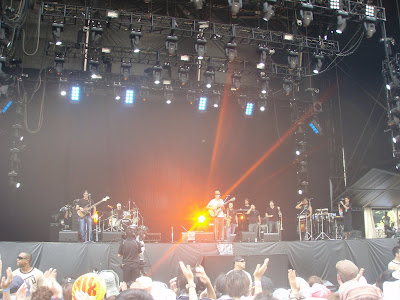 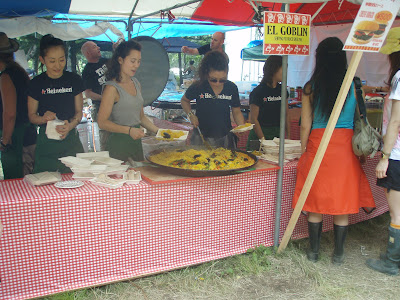 I became a "White Lies" fan after seeing these guys' set. Stellar performance. 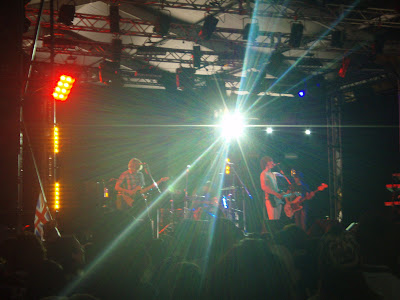 When we came out from the Marquee, this is what the sky looked like. 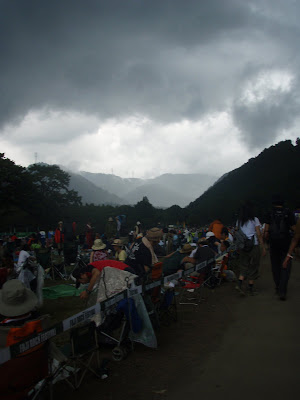 The festival grounds are huge and you have to walk quite a distance to get from stage to stage. The paths along the way are sweet though. This is as we were walking by "Kids Land", and apparently to be cool in Kids Land, you need what we think was pigskin pointy hats. I was not cool and proud of it. 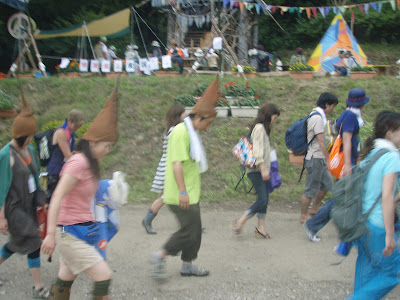 Mechanical shark in the river. 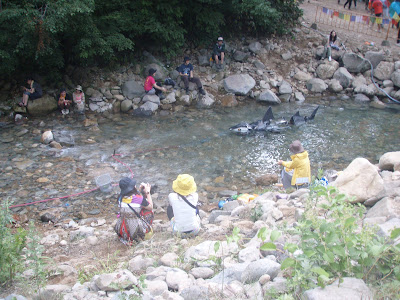 The Futureheads, who I'd gotten into a bit when I first got to Japan thanks to an a guy really into British music, sounded crisp and clear and put on a stage act that matched their catchy, but a bit rageful, music. 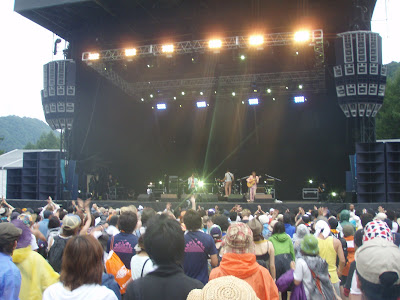 I was maybe most excited to see Ben Folds and he didn't disappoint. I haven't heard a lot of his new stuff (LP's released on-line), so I was worried it was going to be mostly that. It wasn't. He played a lot of Bend Folds Five stuff and tunes off Rockin' the Suburbs, so lots of happy singalongs. He also 'debuted' a new song about Japan, which I honestly couldn't tell whether he was serious about releasing it as his next single or not, because it was pretty ridiculous (based on him getting a concussion during a show in Osaka, Japan), but also pretty good. Only time (or my Ben Folds obsessed friend, James) will tell. 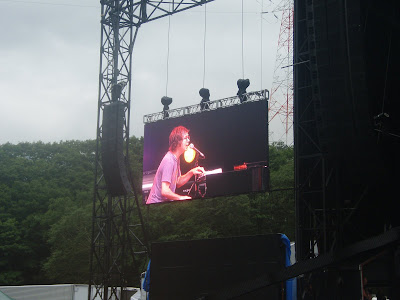 This is what happened in the middle of the Ben Folds show. 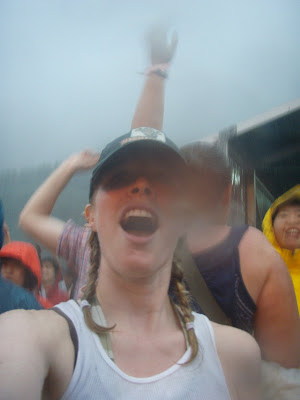 The after affects were this... 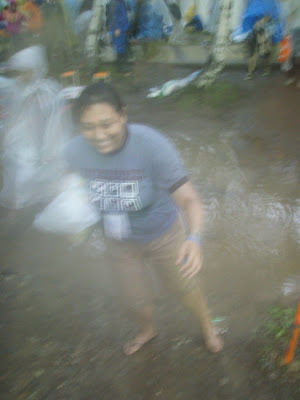 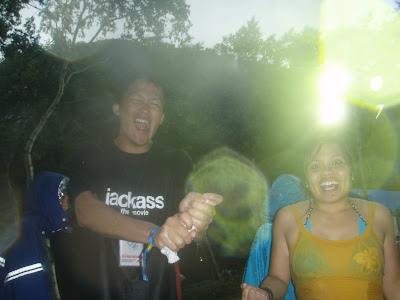 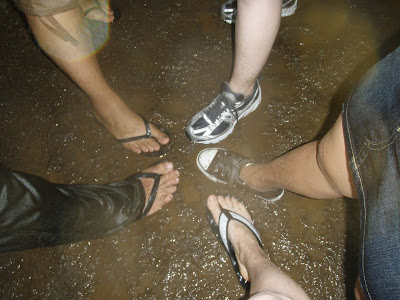 Much to our dismay, we ended up leaving way earlier than we would have liked due to what could have very well been hypothermia in a few hours. We stuck it out until we were all thoroughly chilled to the bone, and with our heads hung low and a missed Michael Franti performance, we headed back to Maebashi with the radio pumpin'.
Posted by Sarah M at 11:40 PM