I've done a ton of different types of travel in Japan from trains to boats to making friends drive. But one type of transportation I had yet to experience was the Japanese tourist bus. These are a significant source of income for the Japanese domestic economy and especially popular among retired Japanese citizens. The Japanese are very proud of the many interesting and beautiful sights their country has to offer and respectively have buses from every major and lots of minor cities across Japan that travel to other major and minor cities across Japan.
On August 2nd at 5am, Alex, Laurel, and I got on said Japanese tour bus from Maebashi to head up to the northernmost prefecture in Honshu, Aomori-ken. We were the only foreigners on the bus, but our tour guide was amazing and translated everything for us. 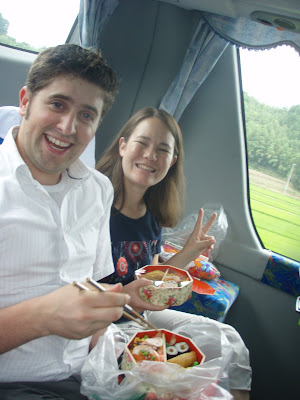 It took over 12 hours with all the stops to get to our final destination in Aomori, so there was lots of sleepin' on the bus. Aomori-ken has a lot to offer, but their main attraction is the Nebuta Festival. It originated some 1200 years ago, and has grown to be the most attended festival in Japan. 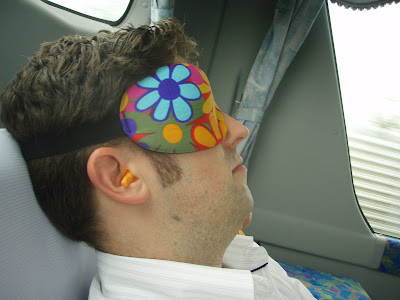 We got there a few hours before the parade was set to start (which of course always starts meticulously on time), but there were already people out workin' the crowds and selling festival souvenirs.
*All the pictures below are taken by Alexander Laws: http://www.photoblog.com/AlexanderLaws/2008/08/01/nebuta-matsuri.html . 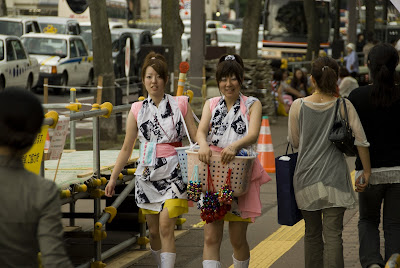 I love the effect Alex used on this picture. 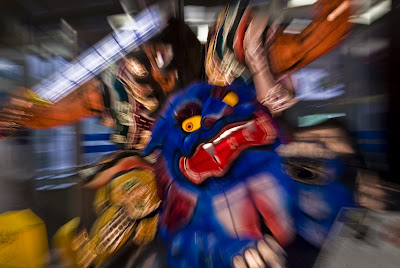 In the festival information center, Laurel got her yukata all tied up. I couldn't be bothered. We look awesome, of course, but that samurai and dragon you see in back of us is what the festival's all about. As soon as the festival ends, designs for the next year start to be created. They are patterned after historical people or themes. Then it takes the entire next year to construct a float, made of a wood base, carefully covered with vibrant colored Japanese paper around wire frames, and lit from the inside with hundreds of light bulbs. There is a specific dance, specific costumes, and specific tunes played on the flutes and drums for the parade. 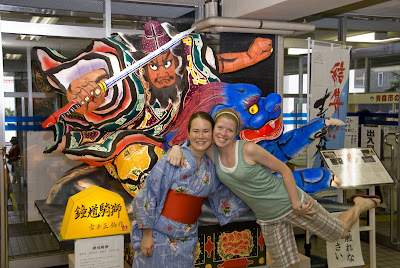 Like 'real Japanese', we knew we had to try the area's speciality food. Aomori is famous for apples and scallops. So instead of festival food, we sat down to a nice dinner at a local izekaya. The scallop dishes we had were indeed, special. 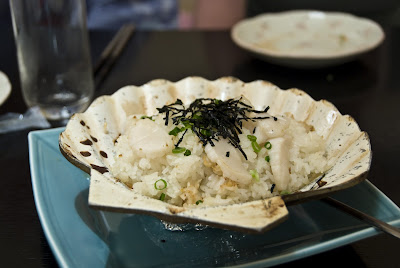 About an hour before the festival was set to begin the rain started... and it didn't stop. It wasn't a downpour, but it was enough to make everyone take out and keep out their umbrellas the entire parade and enough to require all the floats be covered in a giant plastic sheet. My pictures turned out horrible, but Alex being the pro photographer he is took the amazing shots seen below. 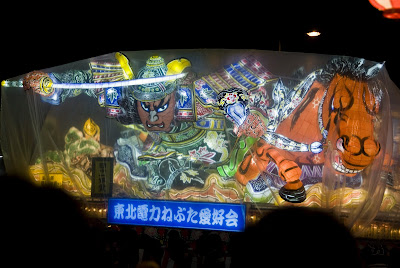 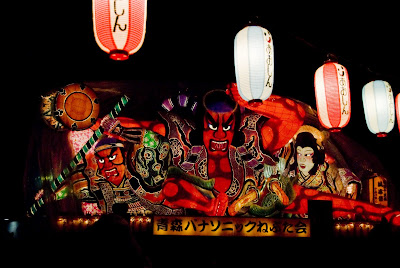 The silhouettes in front are the men pushing the float - so you can get the perspective of how massive these bad boys really are! 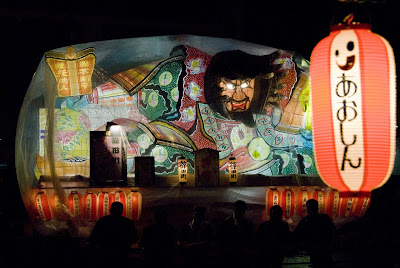 Here's a super low quality video to help you picture the festival. 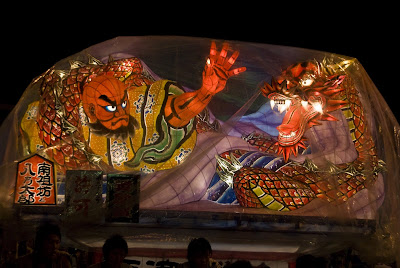 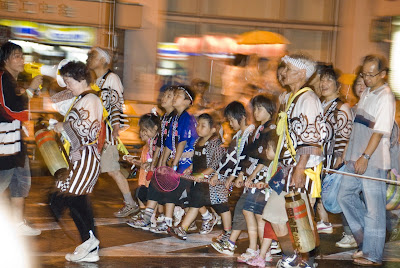