When Frank came back up to the 'Bash from Kyoto, I had big plans for us. First, she would "get" to come to my school and "help" me teach. She came to my favorite elementary school, met my principals and many teachers, and even got a free curry and rice lunch out of the trip (easily everyone's favorite lunch at school).

That night we went to a new izekaya in town. I asked Laurel to call and make the reservation, because she speaks Japanese and I was trying to avoid any mix-ups with my horrible Japanese skills. Somehow, the employee still misunderstood her reservation and marked us down for 1:30 instead of 7:30 (ichi ji han, not shichi ji han). I don't even think they're open past midnight. The drinks were tasty (although not worth the 30 min. wait it took each time to get them)... 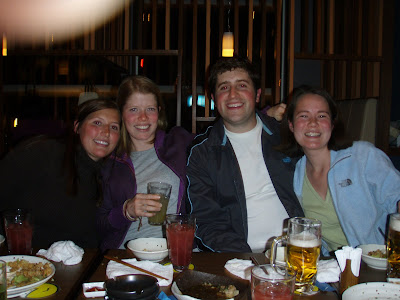 but the food left A LOT to be desired. French fries and fried chicken gizzards weren't quite cutting it. 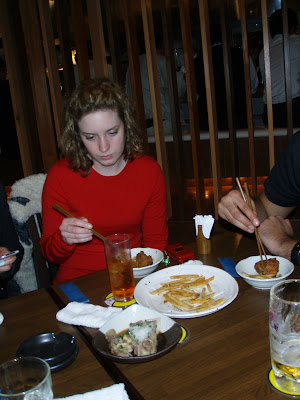 The next day was an early riser as we headed out for a day on the slopes of Manza. Manza's in the upper north east part of Gunma, right on the border of Niigata, about a 2 1/2 hour drive in good weather. It was rainy and foggy on the way there and turned into snow/slush as we drove up in altitude. BUT, we did finally make it there. Tomomi says, "Yay!" 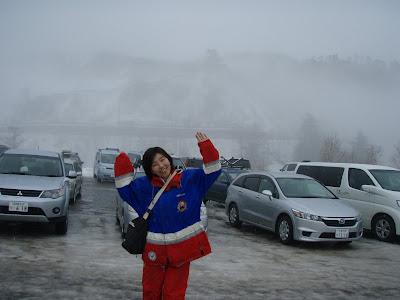 We opted for a half day ticket, what with the lack of visibility and expected long drive back. My first run of the winter season - I said, "Yay!" 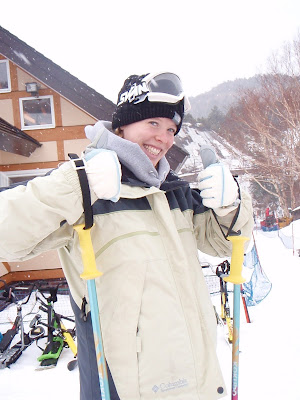 Tomomi had mentioned that she got Syooma a new ski outfit and she had hoped he wouldn't be too cold on the hill, but I just laughed and thought she was kidding. Little did I know that Yoshii's totally crazy and awesome and would just strap him up for the runs! 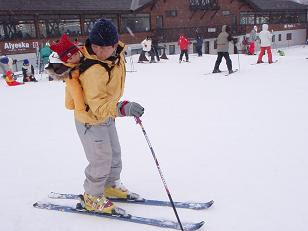 Tomomi told me afterwards that she was really scared at one point because Syooma wasn't moving and she thought he was dead. I think that's when she stopped skiing and took him inside;) 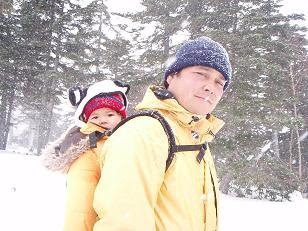 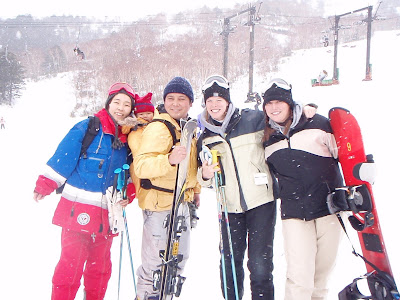 Since it was such crap weather, we pretty much had the hill to ourselves, which was not only nice, but pretty necessary since I couldn't see within 10 ft. in front of me near the end. That's Tomomi in the middle of the hill, by herself, pizza footed, screaming down the hill. 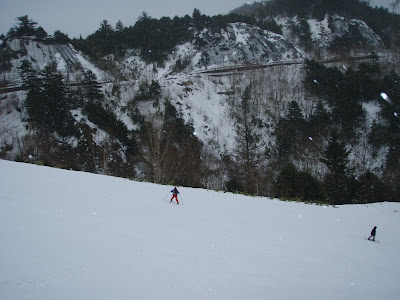 Who said skiiers and snowboarders can't get along? 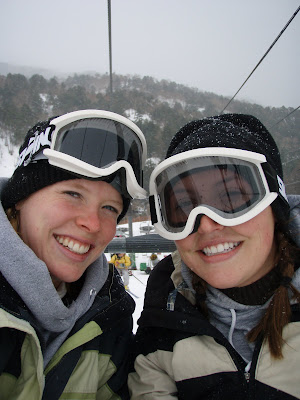 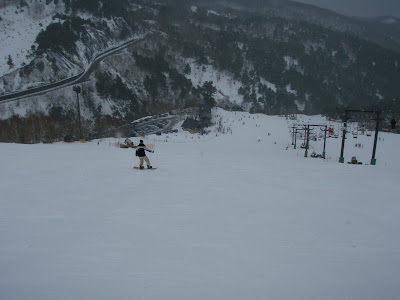 It was a blast to get out and ski on the slopes in Japan, but I was definitely ready to stop by the end of our session. We were all pretty numb and sick of not being able to see anything. We ate our conbini lunches and then maxed and relaxed in the best onsen I've been in yet. The Manza onsen are particularly well known for their variety of spas. There are 5 different indoor spas with different mineral compositions and temperatures in each. There was one that was so hot that only Tomomi could hack it. There were also two outdoor onsen - but only one had an overhang. This is the one I spent over an hour in, not aware that I had fallen asleep until Tomomi came out and told us the spa was closing in 15 minutes. Oooohhhh - feeling relaxed just thinking about it!
And of course, since we hadn't yet - we HAD to go karaoking! This was the night I realized that "Under The Sea" is quite possibly the best karaoke song, ever! Job well done, Laurel! 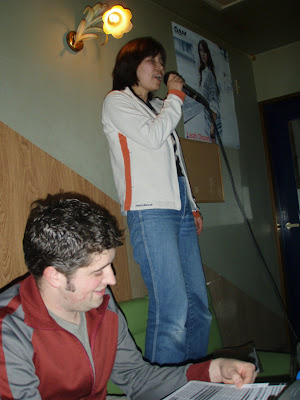 After walking/running to the train station at 7am (making Frank hate me once again), we missed our intended train by literally 2 minutes. Eventually we got to Tokyo, and made attempt number two for the Tokyo Metropolitan Government Buildings. This time it wasn't closed. The view is absolutely incredible. It just puts all that is Tokyo into such a greater perspective. One of the most surprising things for me was seeing how big Yoyogi Park is in the middle of city metropolis. Truly awesome. 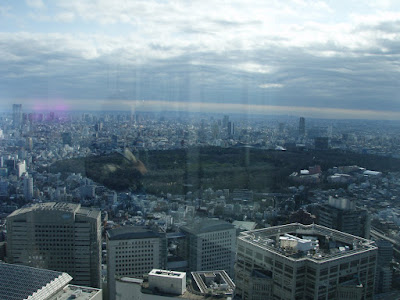 It was kinda hazy, but you can actually see Mt. Fuji off in the distance there. 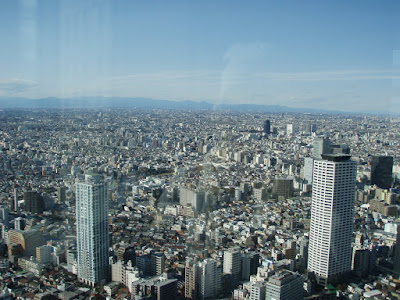 Click on this here button for a little pan of Tokyo central.

Next up was sumo wrestling in Ryogoku Stadium in Japan. I've written a blog about this before, from when I went in September, so if you're really interested in more details about sumo specifics, check this out: http://sarahmoersfelder.blogspot.com/2007/10/my-birthday-abroad-part-3-tokyo-edo.html . 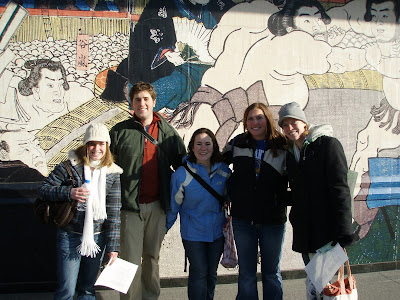 My main goal in timing our arrival at the stadium was getting there before they stopped serving chanko. We were literally THE last people they allowed in for the cheap and tasty soup. 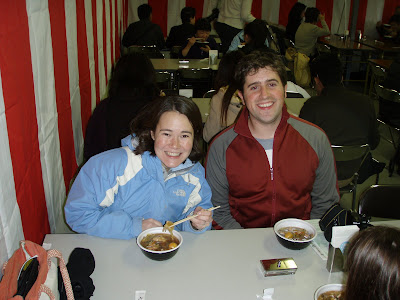 Now I of course took a crap load of pictures - but as usual none ever turn out as good as Alex's. So enjoy these shots of sumo, courtesy Alexander Laws:)
The senior division ceremony before their matches. 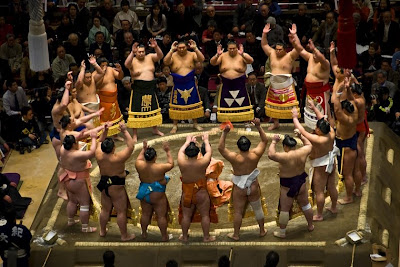 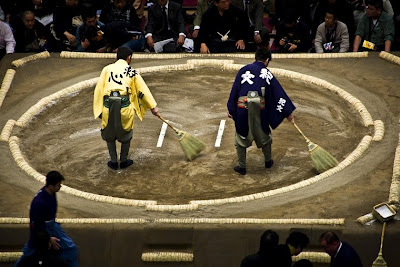 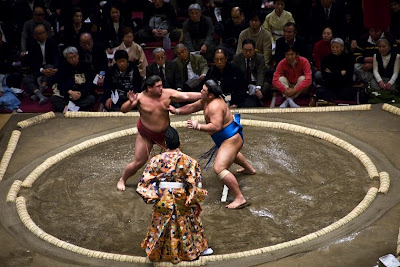 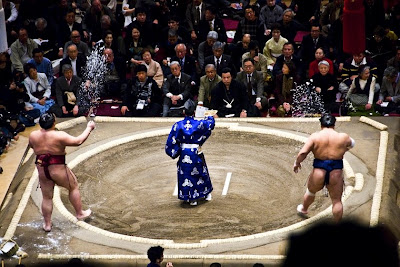 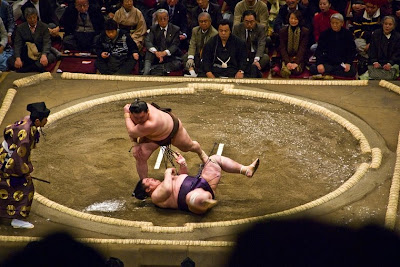 Video of an entire match: 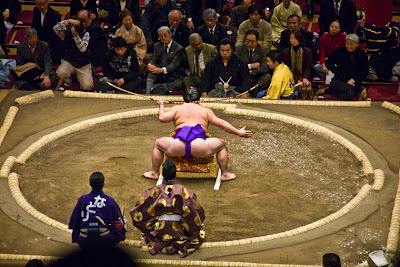 Since there were like 15 people (foreigners) in our group, we took FOR-EV-ER to part, say our good-byes, buy Sumo souveniers, etc. The workers were clearly very annoyed with us and were inches away from literally shoving us out of the stadium. They're very adament about commencement times here. But then, we saw THIS! Clearly, all 15 of us needed a picture with it. Then we left. 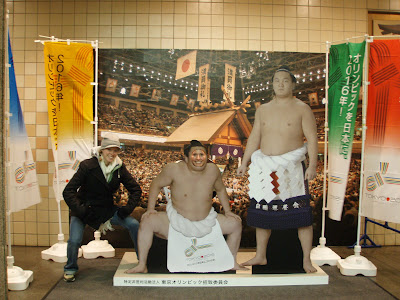 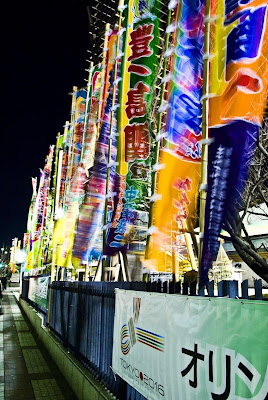