Now a week after our first attempt at riding the roller coaster in Tokyo Dome City and it being closed, Frank was basically wetting her pant(ie)s to get on the Big O and ride! Most people were too worried about the combo of the bitter cold + roller coaster high speeds, but Alex and Laurel are bad asses who hacked it out with us.

I can't say I was even a fraction as excited as Frank, but I was pleasantly surprised by all that was "Tokyo Dome City". Apparently these sorts of displays are pretty common in the winter - they're called "Christmas Illuminations" in English. 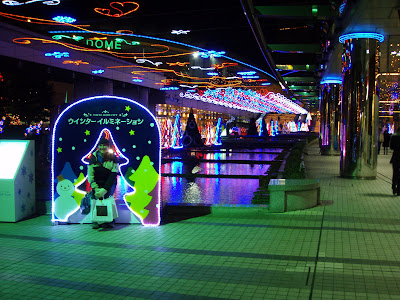 As we made our way to the Big O, we kept passing one cool thing after another. For example, this here Baseball Cafe, with Ed Debevic's Style dancing on the counters (PS - what ever happened to Ed Debevic's? I loved that place!). The music was playing outside too, so we decided to join on in the dance. I think we were drawing too much attention from the employees though, so we left (eventually). 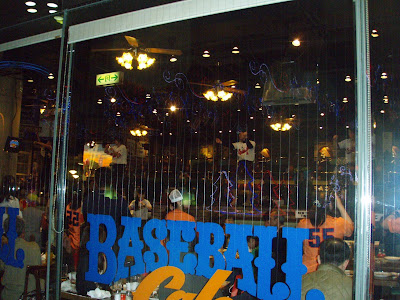 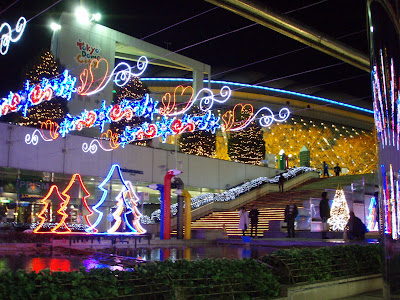 Then we saw the Tokyo Dome in all it's illuminated night glory. It's home to the Tokyo Giants baseball team, but is also a venue used for other sports and music shows. 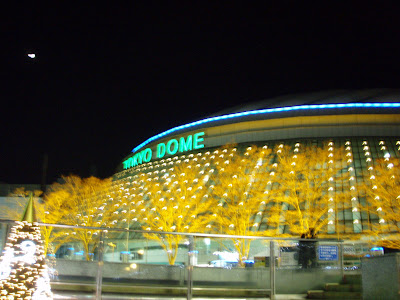 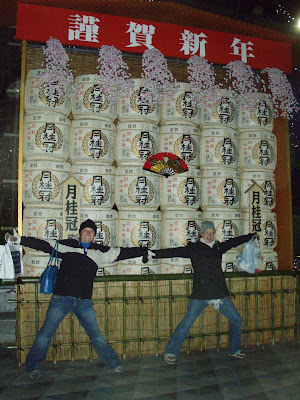 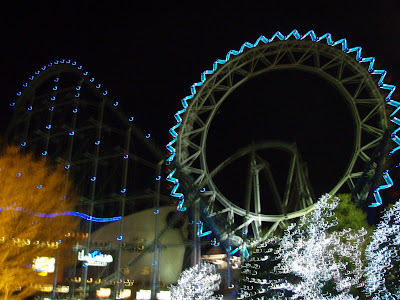 We had to wait awhile to get on the ride, but I'm sure Katie would say it was worth it. I felt like I was in Gotham City or something with all the illuminated objects. It was kinda creepy, but more so it was cool looking. 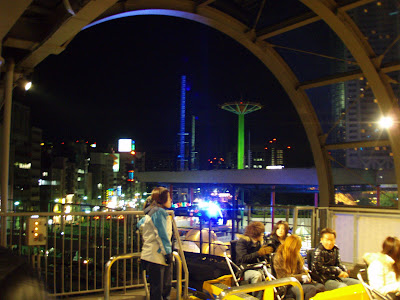 Pretty sure it was our lucky day too, because we were like the 2nd last people in line before they cut it off. It was weird, because they put life sized/weighted dummies into the chairs that weren't occupied when we rode. We attributed it to the Japanese being overly safe about weight recommendations, but I wondered how 2 seats could really make a difference and throw off the entirety of the ride. The ride was probably less than a minute long and thus not worth the $10 it cost to ride in my book, but it was awesome dropping from 80m up, and going through a hole in a building and a Ferris wheel. It was pretty intense. 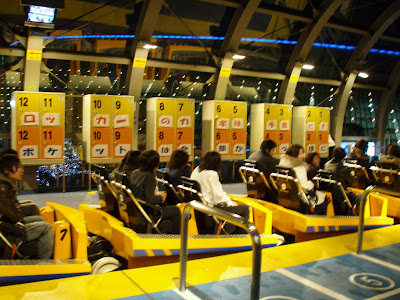 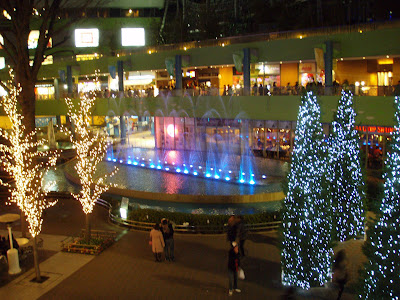 Since we couldn't ever make it to the Tsukuji Fish Market (closed on Sundays/any day we wanted to go), I couldn't get Frank the freshest sushi in the world. But, I was adamant about making her eat some - namely because she was so adamant about her distaste for it and I could quite possibly be the world's biggest sushi affectionado. Man, I can remember the first time I tried sushi with my sister in Milwaukee Public Market... it was the weirdest texture and not the most pleasant taste at the time either. She said I'd hate the first time, I wouldn't mind the second, and I'd never love the third. How right she was...
Thus was not the case for Ms. Frank. We got her to try quite a bit, but the only one she actually enjoyed was this cooked eel. Since she doesn't like wasabi or soy sauce, the eel sushi's sauce was probably the only one with any flavor. Great effort though, Frank! Thanks for trying;) 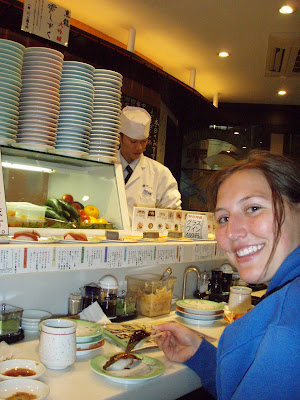 I enjoyed the meal thoroughly, and even had a go at something new: I think it was mini squid tentacles. It wasn't that great: just like normal squid sushi it was tough to chew, but it did have a really good thick sauce on top that made it aight. 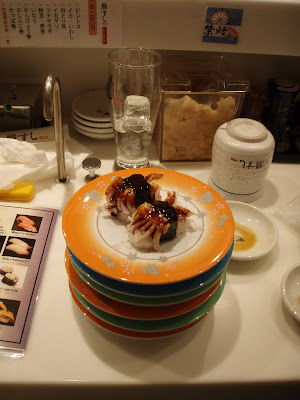 The next day was Frank's last so we had a pretty intense "To Do" List. The first stop was the busiest intersection in the world! I failed to realize that at 7am on a Sunday, it's not gonna be so busy. So, we were off to Senso-ji temple in Asakusa. Katie got one last look at a temple and shrine in Japan. I've also been here before (possibly my favorite location in Tokyo), so if you're interested in more DT's, check out my last blog on it: http://sarahmoersfelder.blogspot.com/2007/12/3-day-weekend-means-i-gotsta-go.html . 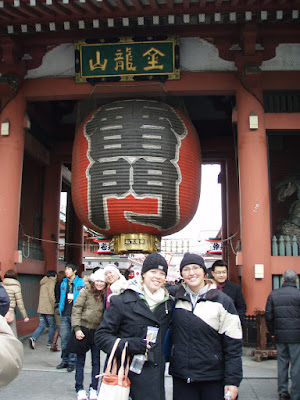 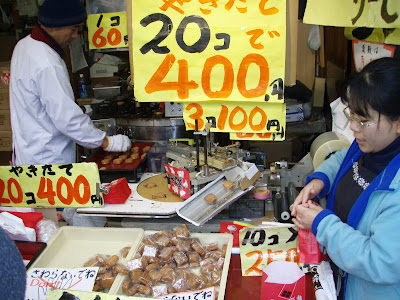 Nakamise looked a little different with the New Years decorations up. 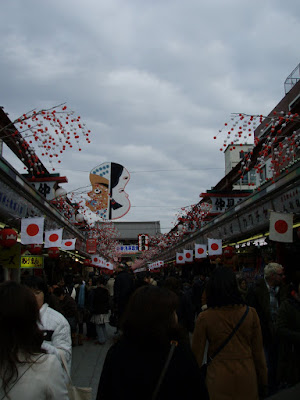 The main reason we went here was so that Frank could try my favorite Japanese food: okonomiyaki. We couldn't find it anywhere, so we settled on some takoyaki (fried octopus balls)and yakisoba (fried noodles).
Frank intensely watches Takoyaki man mix up her balls while pondering, "Am I really gonna eat those?" 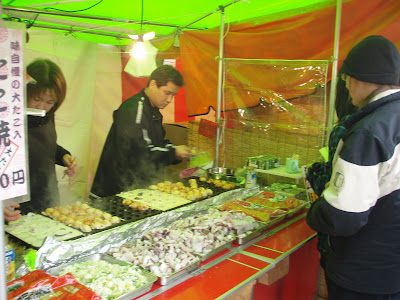 She did! And she liked it! And despite my tainted festival takoyaki experiences, I liked 'em too! 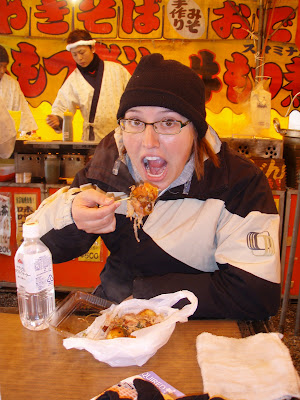 Cute old couple took a picture of us with our food (minus the food), then complimented us on our chopstick skills and the fact that we brought our own and asked us where we're from. Things said after that point I didn't understand. 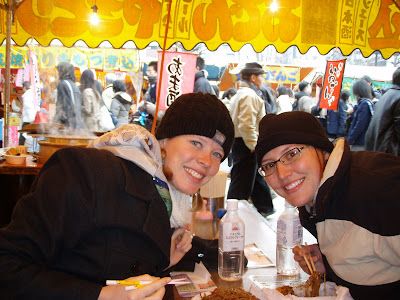 We never actually made it in the shrine, but there were more drums of sake to see! 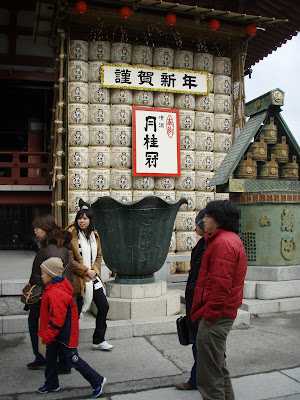 And sugar coated pineapples to eat. 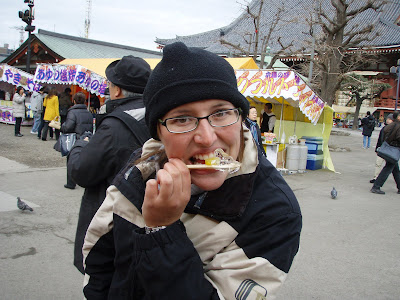 And of course, a stop at my favorite ice cream stand! I stand being indecisive about which flavor to get for an average of 10 minutes each time, but this time we were on a schedule... so I got two: sweet potato (DELICIOUS!) and tofu (despite loving all other types of tofu, it is NOT good in ice cream form). Frank made a great choice with the black sesame which apparently tastes like peanut butter. 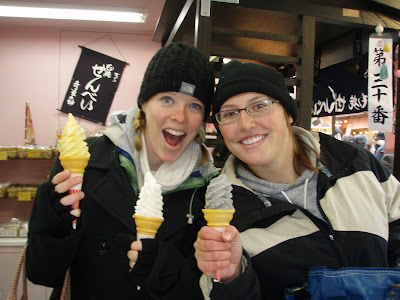 Running for transportation for the last time, we made it through the subway systems just in time for Frank to catch her bus to the airport. I'll miss you, buddy! 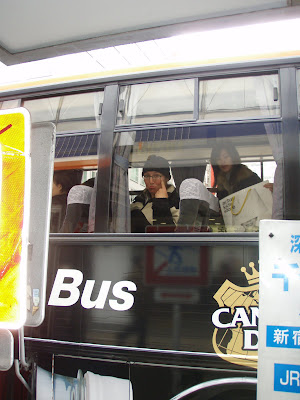 After shedding a tear for Frank's departure and waving about 387 times at her on the bus, I was on my way. I wanted to check out the infamous Akihabara area of Tokyo. It's also known as "Electric Town" as it's the most well known place to go for all your electronic, computer, and anime needs. This is a pic of the main street, Chuodori, where the road is actually closed off on the weekends due to all the business. 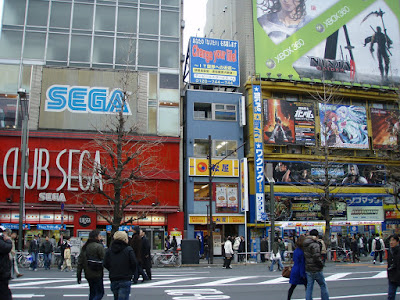 Electronics everywhere! Me, taking a picture of the TV hooked up to the video cameras, pointed at me. 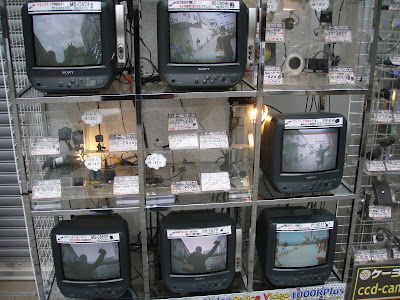 I did manage to drop some cash on a new jump drive (which doesn't actually store the capacity it claims to) and blank CDs. But, my favorite part of being there was getting to play on the original NES system! Austin, you'd better be taking care of that priceless unit at home - I expect to play immediately upon arrival! 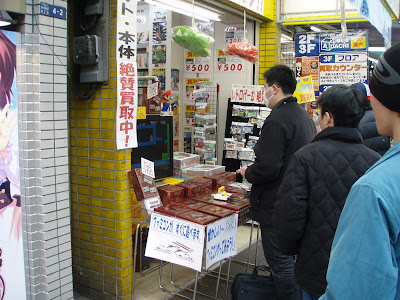 It was pretty overwhelming for me, but I think Austin and my Dad will love it. So save all your electronic shopping needs for June, boys.
Posted by Sarah M at 10:16 PM