Fall in Gunma is just as wonderful as in Wisconsin, minus the football and Madison Halloween festivities. Probably my favorite part of fall is the ideal weather and beautiful colors of the changing leaves. Hiking in the fall is great anywhere, but our trek on Shiga-san (on Mount Shirane) in northern Gunma was truly fannnnnnnntastic.

A few JET friends I have basically inherited the friendship of a wonderful Japanese family from their predecessors (JET’s whose jobs and apartment they took over). They offered to take us with them on the trip (about a two hour drive north), and we gladly accepted.

It was an early mornin' start (7am), but it was worth it. Again, not sure if it was the weariness of the morning or what, but in addition to rice paddies, I also have a new found interest in wind power. This was a lone soldier we saw on the drive there. 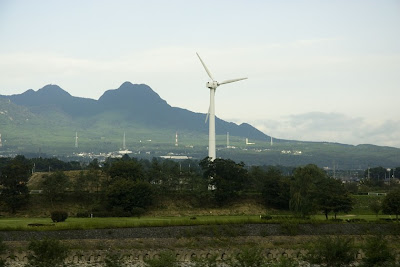 We're getting closer! This was a pull off we made on the side as we were driving up the mountain. Alex is an amazing photographer and most of the pictures from this blog are from him! Yes, I found somebody who deserves the title of paparazzi WAY more than me. Thanks, Alex! He streamed a bunch together to make this panoramic shot.

Awwww, look at the happy family photo! Laurel & Alex (JET married couple from Boulder, CO who are awesome), me, and our Japanese baby (?), Shooma. This kid, and his hair, are awesome as well. And yes, it's like that all the time. 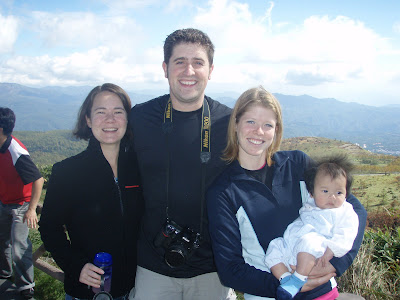 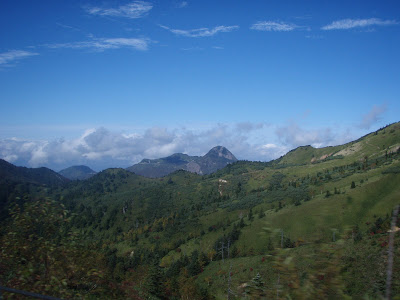 Using a ski lift to kill some time. 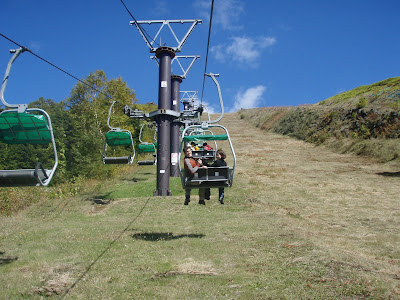 Before we started the hike, we saw this sign. It says, "beware of bears". I was kind of disappointed we didn't see any. It was probably due to the hundreds of other hikers wearing obnoxious bear bells on their boots. 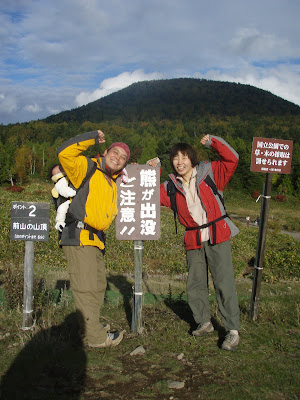 There are those colors I've been waiting for! 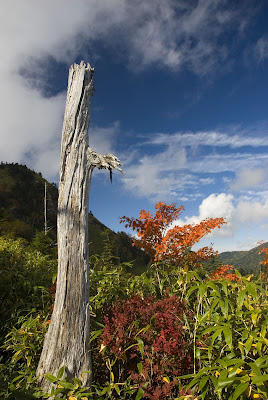 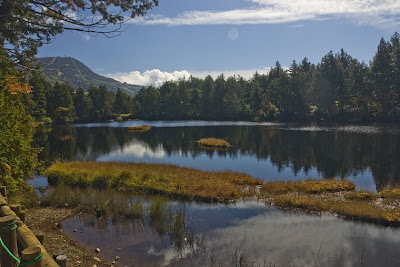 The whole crew: Tomomi, me, Yoshii, (Shooma's in his 'lil back pack),Laurel and Alex. 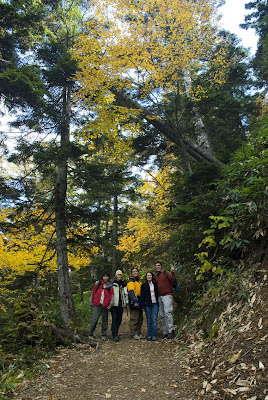 Not that I can read maps or anything... but for those who can: 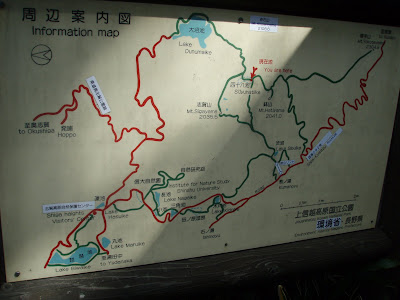 Laurel and I lead the pack. 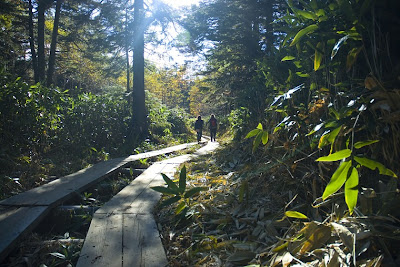 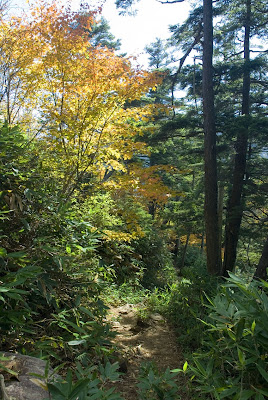 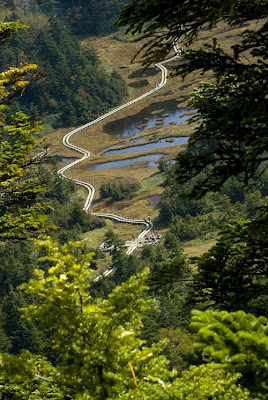 We made it to the peak! I'm yelling something in Japanese in celebration of this feat... unfortunately, I can't remember what. An example of why my language learning is going so slow... oh, information retention difficulties. 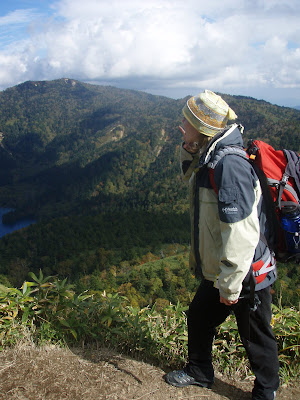 I think Alex put his huge fancy camera on "uber blue" mode, because it definitely wasn't that color through my specs. Regardless, this picture looks sweet, so it's here. And another family photo for the Christmas cards. 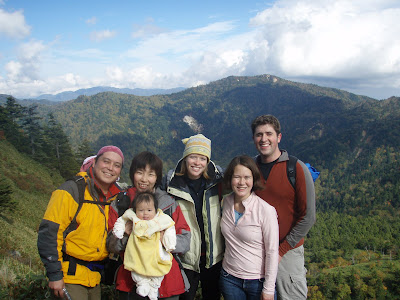 The hike started out pretty flat and it was more like a, "walk, and wait for Alex to move his tripod for 5 minutes" stroll than a hike for the first couple hours. But after lunch, it was more mountainous and tough. I still can't believe Yoshii carried Shooma on his back the entire trek. I kept offering to take a turn, but he said he'd rather carry Shooma than my big red bag. Everyone thinks I've got bricks in there or something, but it seriously feels like a feather.
Thanks, sister, for the amazingly useful graduation present. I seriously take it everywhere with me! A student said they saw me biking the other day and they knew it was me because of my red bag. Haha. 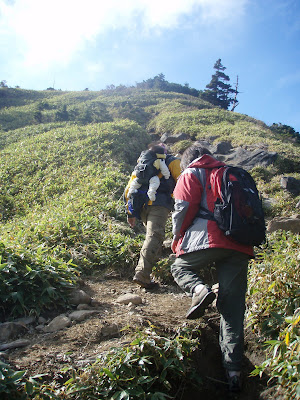 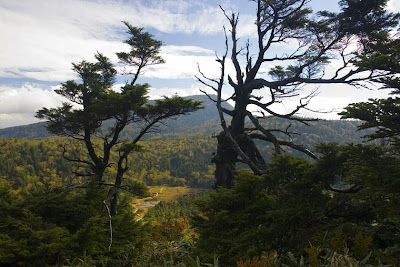 Alex making his way down... camera and tripod in hand:) 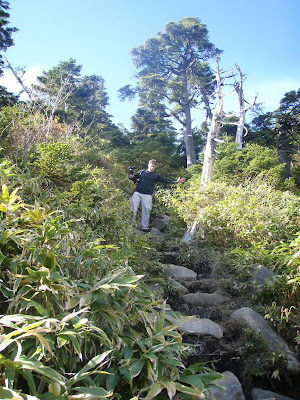 The bright, sun-shiny day turned misty and hazy in literally seconds. Luckily we were in the car by that point. Those little white patches right off the mountain in the distance are natural hot springs. Japan is, after all a volcanic island. More on hot springs to come in the next blog! 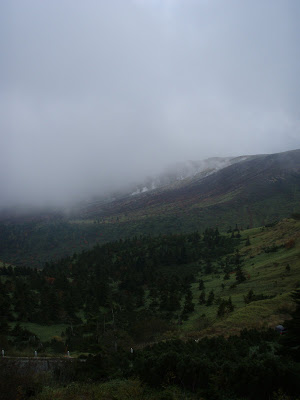 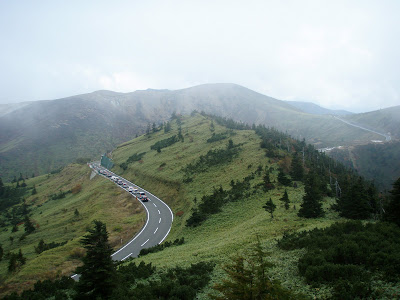 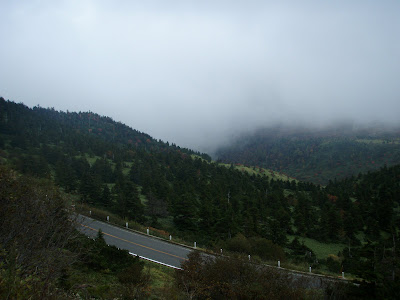 The vapors off those sweet hot springs AND fall colors... very cool. 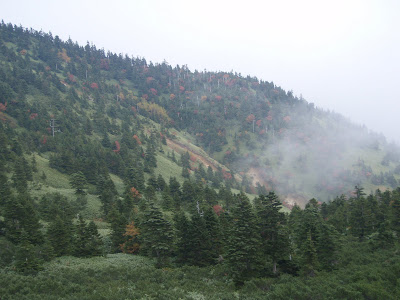