Welp, I’m a little behind here now, but I still want to write about the stuff I’ve been doing. Over a month ago now, I spent another long weekend in Tokyo. I know a lot people think the city’s crap, but I’ve loved everything I’ve seen so far. I think it’s one of those places tourists have so built up in their minds that it’s usually disappointing. But I think that’s because you can’t really “experience” Tokyo in a day or two – you grow to love it a little more every day you spend there… I think.
Because of a sweet hook-up a friend had, we got to stay at the ANA Intercontinental in the Roppongi area of Tokyo. It’s a super trendy area full of foreigners (I think equal if not more foreigners than Japanese… really weird feeling there actually). 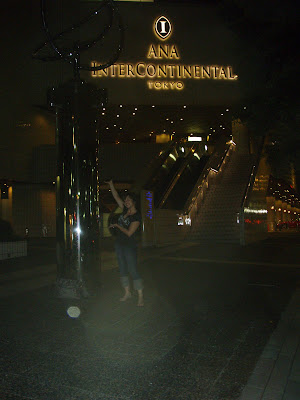 Our hotel is pretty well renown and we stayed in what we deemed as, "the Sweet Suite” on the 31st floor. This was our night view. Tokyo Tower is the red and white thingy. 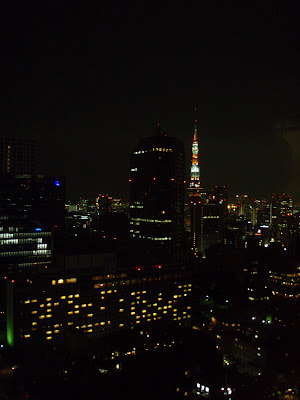 Do we look sophisticated and ritzy or what? 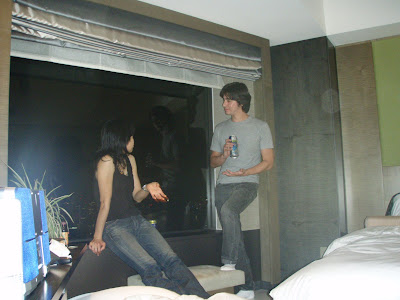 This is a little better view from the morning. That white and red thinger to the right is the Tokyo Tower. I guess having a token 'tower' in your city became popular in Japan during the late Edo period when internationalization became accepted and Japanese architecture drew from the French. 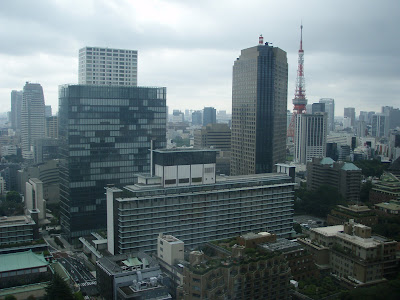 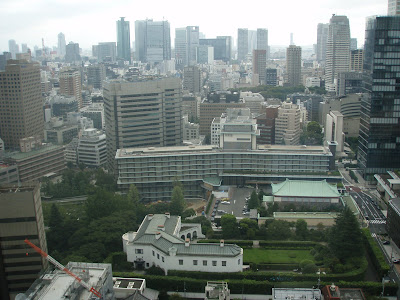 We also went to the Ueno Zoo. Turns out animals are just as cool in Japan as America. 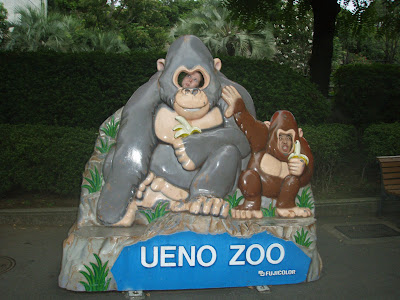 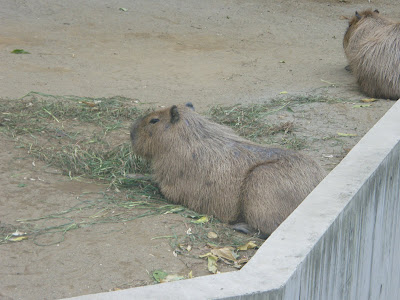 I think this tapir is having a bad day. 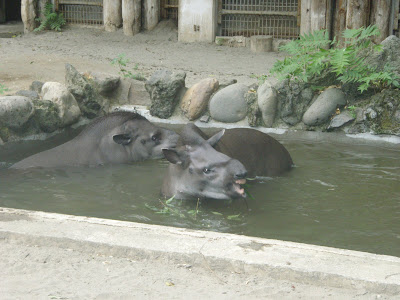 I have no idea what this thing is! 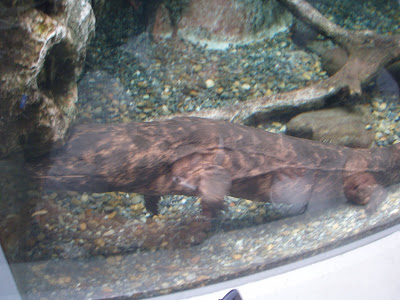 I saw a few animals I’d never seen before in my life – like this okapi (half zebra half horse). 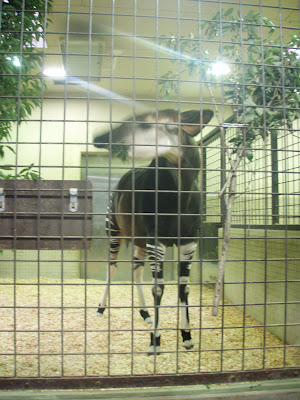 This is a famous market place street in Ueno. 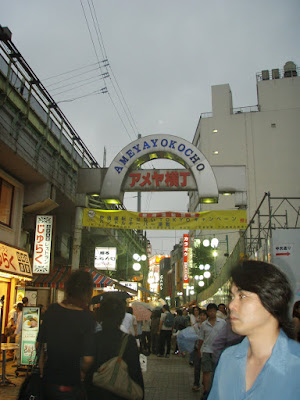 The next day we headed to the Meiji shrine. Before entering, I had to cross through my first torii (literally translates to gate, but clearly is much cooler than any gate I've ever seen). It's intended to make you aware that as you walk under it, you're entering a sacred space. It was really interesting actually, because I asked my cooperating teacher about this, and he actually told me that most Japanese probably don't even realize it's there. It's such a common part of Japanese life that the significance is never discussed, it just exists. 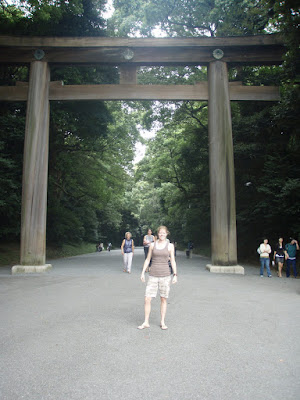 This is much more than a cool lookin' wall of white tubs. It's a display of the many sake (Japanese rice wine) drums that were donated by sake companies back when the shrine was built. Sake for good luck? I could get used to that. 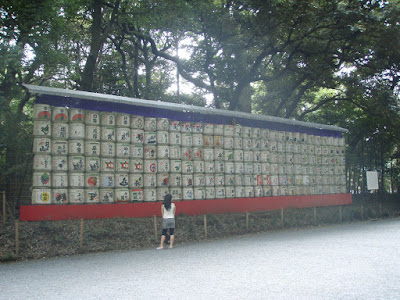 Before entering the shrine and praying, you must wash your hands and mouth and 'set your mind at ease'. You shift the dipper from one hand to the other, rinse first your left, then right hand. Then rinse your mouth with water poured into the palm of your left hand. 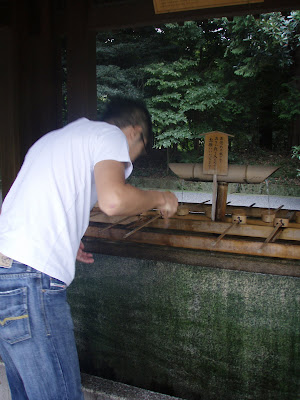 Alas, we have made it to the Meiji Shrine. 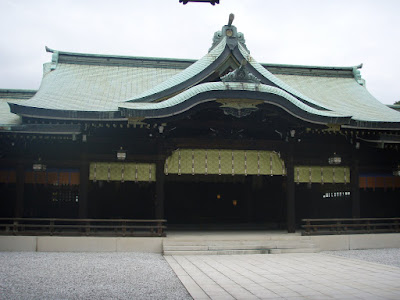 AND, it was totally our lucky day too, because there was a wedding procession going on. I wish I could tell you what everything means and symbolizes, but I haven't a clue. You can make up fun ideas in your head and I'll look it up. Or maybe I'm intentionally stirring up some international curiosity in ya so you'll feel inspired to search for yourself... you'll never know! 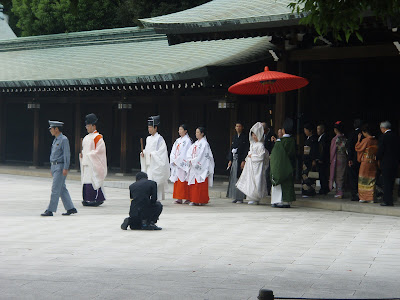 Here's Kaz hanging up his ema (votive tablets). An ema is for special personal prayers and gratitude toward the deities enshrined in Meiji Jingu Shrine. Your write your own, then hang it around the tree, and they are later offered at Mikesai (the morning ceremony held every day) where our 'supplications' are conveyed by the priests. I gotta say, at a time when ALOT was going on with the fam... this was really meaningful and emotional for me. Although the shrines are part of the Shinto religion, I think you can still pray to a Christian god with respect. Prayers are prayers, and really, I'm not sure we're not all praying to the same God anyway. A common thread througout history's civilizations are their religions and the desire to believe in a power larger than themselves, and instead of focusing on the differences there are in the religions, I think it's beautiful to celebrate the similarities. 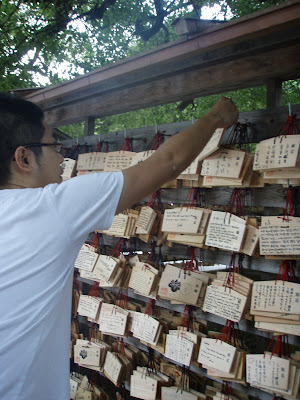 After hitting up the shrine, we headed to some super trendy area to shop in Harajuku. Everything from Dolce & Gabbana to Chanel... so clearly, I walked the entire strip, and stopped in the ramen restaurant at the end. Ramen was alright... Hokkaido custard and rare 'bitter' caramel topping was better! 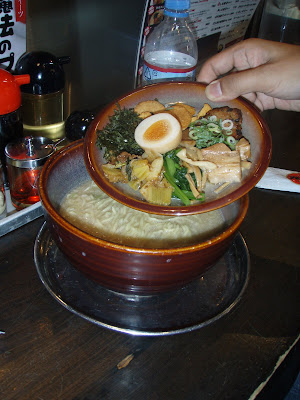 Then we hung out in a nice little park, got rained on, and headed back to the station. If you've seen Lost in Translation (renown Sofia Coppola film starring Bill Murray- won tons of awards but was WAY too slow for me) - this is the big screen/building the dinosaur walks across that's featured on the movie jacket and the intersection with all the people. 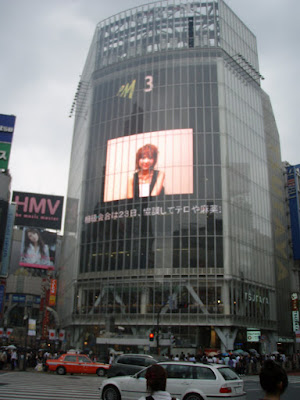 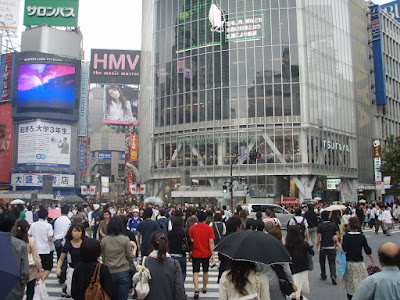