Even though we were beat from a full day of standing, riding, and eating… we managed to pull it together for some Sumo action the next day. Twice a year, for 15 days straight in Ryogoku, Tokyo, Japan, the national sumo wrestling tournament is held. It begins at 8:40am and ends at 6:00pm, but the upper-ranked wrestlers don’t start until about 2:30pm. 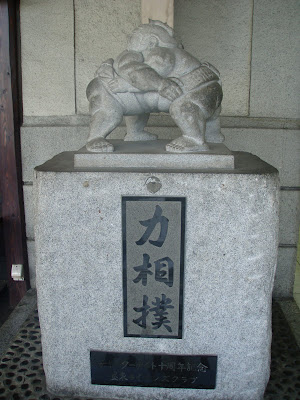 So, we got there early enough to pick up some tickets (most days were sold out for the tournament), but then had some time to kill. We only had to wander a few blocks before finding the Edo-Tokyo Museum, a totally unexpected visit and awesome surprise for us. It was totally interactive and had wonderful reference materials and reconstruction models of villages during the Edo period of Japanese period (1603 to 1898). Can you tell I’m a teacher when I get super excited about this stuff?

Here are Kaz and Kristine looking through some sweet binocs at the chounin (townspeople) areas around Nihonbashi during the early Edo period. Like we consistently see throughout history, the daimyou (upperclass) compounds were spacious and had many buildings, while townspeople lived in cramped quarters. There were also a bunch of models of the castles during that period: PIMP! 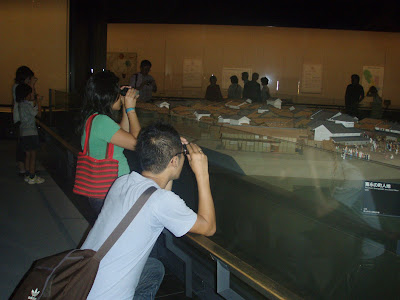 This is a palanquin, which is carried by at least four people to carry around upper class women. It was used for more of a show, with the elaborate designs and expensive materials used to make it, then for practical use. 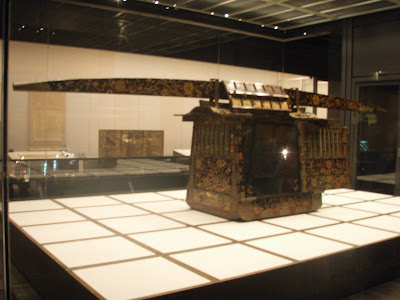 Learning about the art and text book exchanges were one of the most interesting things for me. It wasn’t until the end of the 16th century that moveable print was imported from Europe and Korea, so before that wood blocks were used to reprint text or pictures. This shot shows the progression of one picture (top row) as each layer/color (middle row) must be painted (‘backwards’ mind you) and then pressed onto the original frame. Can you imagine getting to the 10th frame and putting the green on askew? Oops! 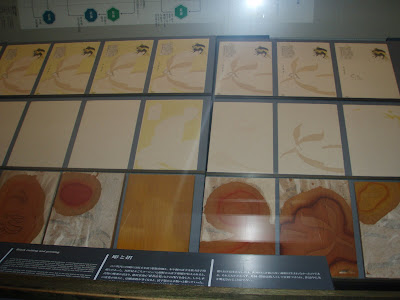 This was cool too, a replica of a book store during the mid Edo period. There was an ebb and flow regarding novels and newspapers related to how much money people had and what they could afford. Also, even though imports and international trade were finally allowed in Japan, international books were still banned. 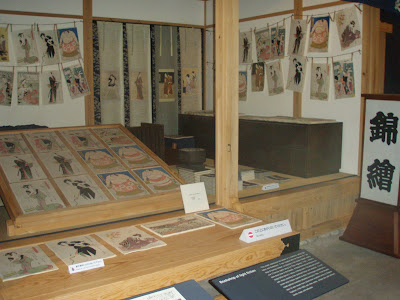 Ignoring the fact that I have my hand up in a “take the picture by pressing the button!” pose, because it seriously took the guy 3.5 hours to take it, this picture shows a scene at a kabuki theater. I never thought I’d have any interest in kabuki, in fact I was kind of turned off by its touristy popularity, but after learning about it I’m so game to check out a show. Kabuki drama began in the Edo period but was initially considered corrupting and vulgar and therefore upper classes could not be seen viewing them. SO, it was more common for lower classes to go. It went from being a new type of acting, to sleazy stripteases, after which women were banned from acting, and it thus focused more on the drama, scripts, and special effects. 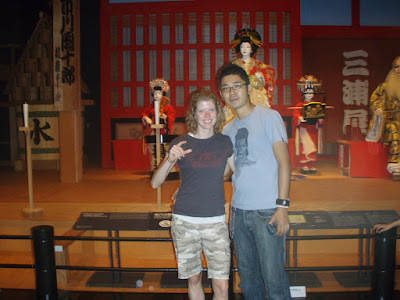 Man, there was so much other cool stuff in there that I could talk about, and even we got cut short, but we had to make it to Sumo, so I’ll get on with it on my blog, too.

SUMO!!!
I’m not really sure whose bright idea it was to make obesity, near nakedness, and shoving each other out of a small ring an official worldwide sport, but I think it was a stroke of genius. We had spent so much time at the museum that our first line of business after getting into the stadium was lunch.
I had read about sumo style dining, or “chanko” which is a ‘potpourri of many different vegetables, meat and other ingredients boiled together in large cook pots. The soup based dish is a favorite at Sumo wrestler stables’. We waited in line with hundreds of others that were just as excited as us for the dish. While we waiting, a Japanese photographer told us he was doing an article on foreigners at Sumo matches and asked to take our picture eating chanko. So awkward eating with a camera in your face – I got all nervous and was dropping the konyaku and boiled eggs resulting in spattered soup everywhere. I’m pretty sure the article is more about how bad foreigners are at using chopsticks and how bad their table etiquette is. Regardless, here’s some pics from that experience. 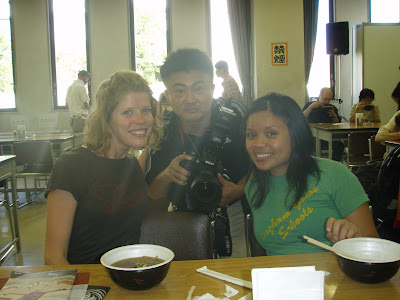 The magazine: ummm, let’s call it Japanese Monthly Magazine: Most Awesome Edition EVER! 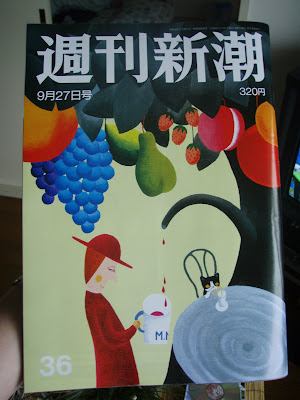 Look at all the funny foreigners! I'm the one with the goofy grin in the lower left. 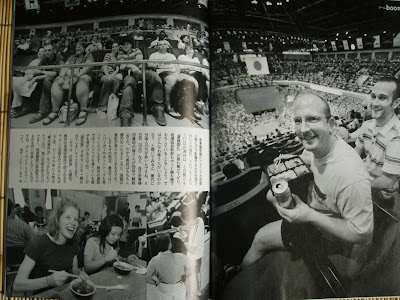 Okay, now the actual Sumo rundown. After a really late lunch, we got into the massive arena just in time to see the Makuuchi (senior division) wrestlers ceremonial entrance. 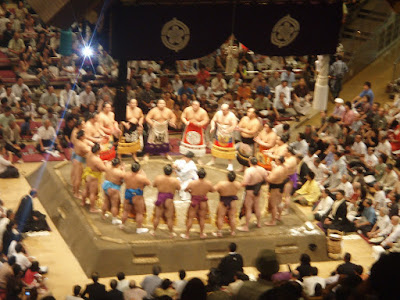 The Yokozuna (Grand Champions) then enter, clap their hands and stamp their feet, drawing spirited calls from the crowd. 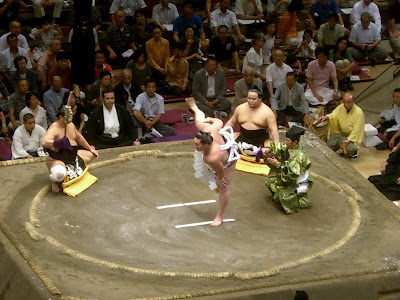 Then, the bouts start up. The time the wrestlers are on the ring platform is actually only like 4 minutes. They have a maximum of 3 minutes to walk around, throwing salt to prepare for the bout, purifying the ring as a sacred place and stamping the ring to supposedly squash the bad spirits and sip water to purify their bodies. These religious rituals are ancient. I’m not gonna lie, that part got super boring, but then as the three minutes neared, the wrestlers would approach the middle line teasing the opponent as to whether they ready to start or not. 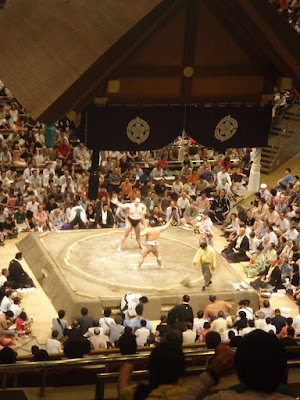 When both wrestlers touch the ground with their fists – the match starts! The next two seconds to a minute are intense as the wrestlers use very specific techniques (there are 82 officially) to get their opponent on the ground or out of the ring.
The videos below show it better, so check 'em out!

I don’t know how I always get so lucky, but I’ve had some amazing birthdays in the past and this year was no exception! A very happy birthday to me, for sure. Thanks to all!
Posted by Sarah M at 7:36 PM

Sarah,
It looks like you had some great times celebrating your birthday. We know your birthday back home would have been fun too but celebrating in Japan is just too sweet. Your dad and I love going to Disney World and I have been there 6 times. I would love to experience it in a different country. Mickey and Minnie are just as special outside of the USA.
Finally, the kids serving lunch to their classmates is awesome. You know how I feel about teaching our young ones responsibility and respect and I think having kids clean their school and taking turns serving lunch is a good way to do just that.