After Ronan and I parted our ways with the rest of the group in Taipei, we hopped on a train to the northeastern coastal beach town of Fulong. After MUCH discussion with all four employees at the information center, we figured out a plan for hiking and camping. I really wanted to overnight it in a temple that was along the trail, but time wise it turned out to be unfeasible. The main draw for heading to Fulong was that it was where the start (or end) of the Caoling Historical is. Lonely Planet says, "If you can only do one hike during your time in Taiwan, make it this one." With the diverse terrain and mention of wild buffalo grazing freely, I made sure it was a stop. I did not, however have any control of the weather. So, all the stunning views and buffalo were non-existent due to the monsoon we hiked through, BUT it was still very pretty and fun. 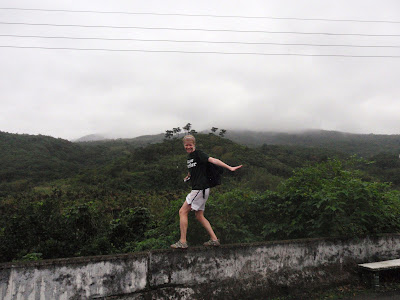 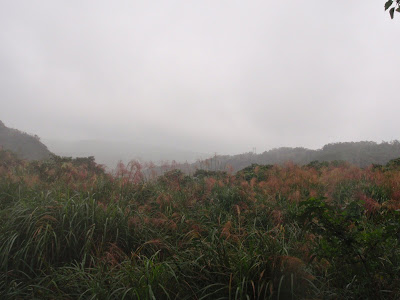 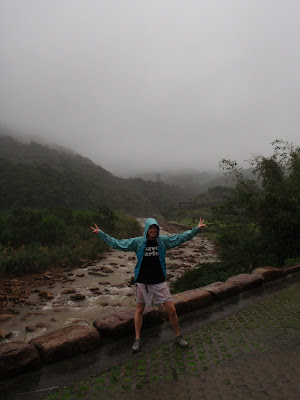 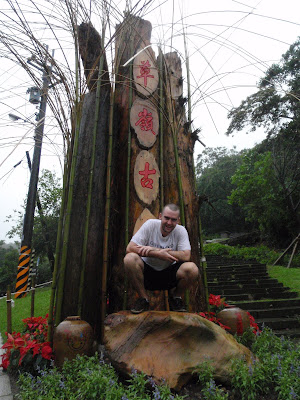 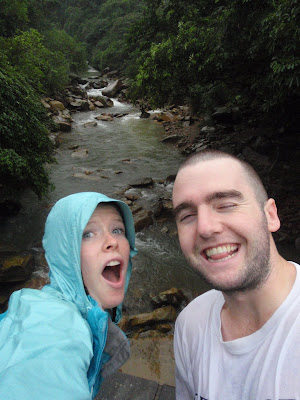 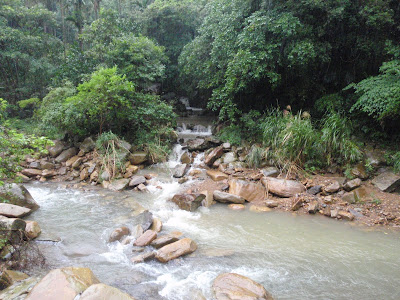 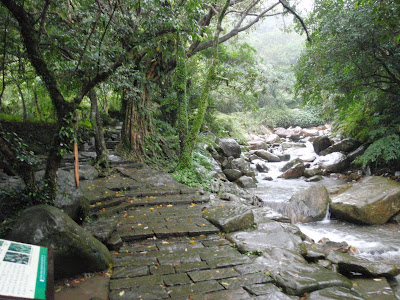 We found a ton of figs on the ground and decided it'd be a good snack - it was! 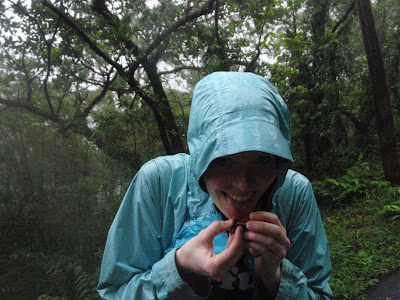 Throughout the entire trip, the aspect I was most pleasantly surprised and impressed with were all the butterflies: everywhere! From Taipei to Kenting, a unique butterfly somehow managed to flit past my face or land on a nearby branch. I don't know what it is about them, but it's like a reflex to smile whenever I see one. And when there are two, it's even more magical. They seem to move and interact with each other like a choreographed dance. Gorgeous. 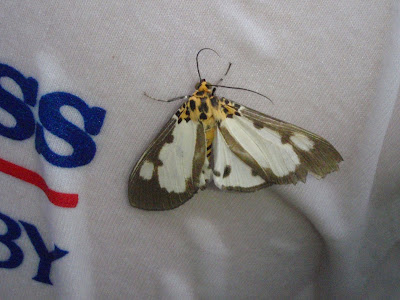 No idea what this was, or whether it's actually still in use anymore, but we were willing to be the guinea pigs to figure it out. 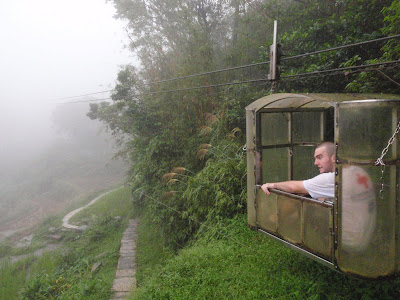 So many beautiful waterfalls emerged. 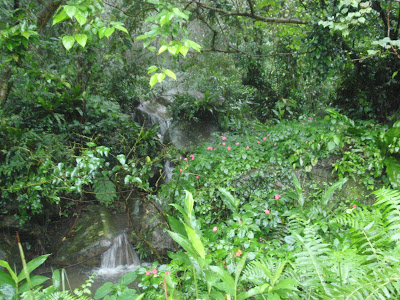 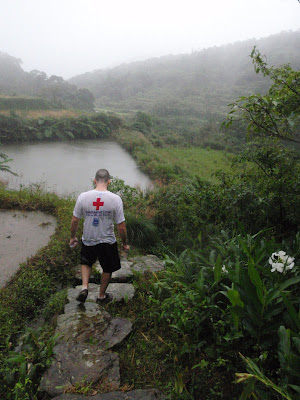 Ronan decided to play in one, fully clothed. 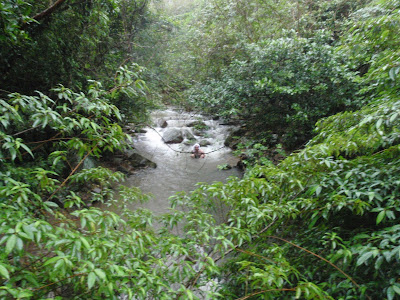 The Caoling Trail was actually built in 1807 for transportation, so there's some cool historical spots along the way. This is an inscribed tablet that reads "Boldly Quell the Wild Mists". The largest stone inscription in Taiwan, actually. It was written by Liu Ming-deng, the Taiwanese Regional Commander back in 1867 after putting up with the stinging rain and thick mists and he realized what those before him had to endure. I'm gonna say my Gore-tex jacket and Merrel hiking shoes gave me a slight advantage. 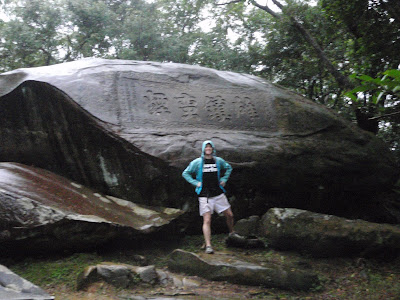 Nearing the coast again, sort of. 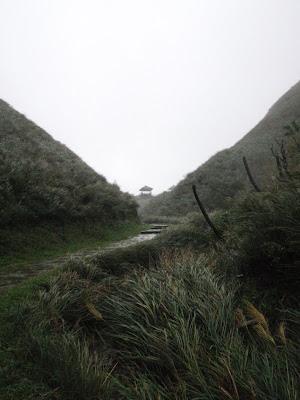 That gorgeous panoramic view we were waiting for. Just my opinion, but I think the dollar Ronan put in the telescope machine was a BIT of a bust. 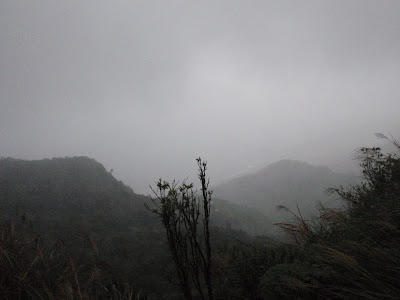 What it would look like on a clear day, apparently. 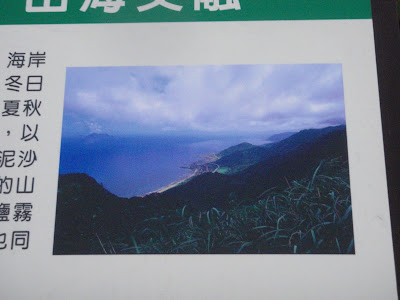 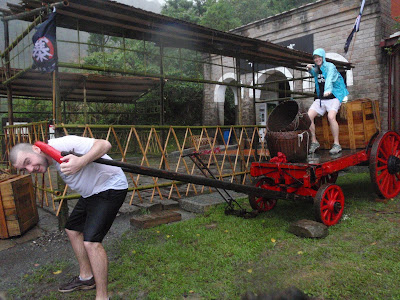 For dinner, we could've eaten at the 7/11 in Fulong, or cab it to the next town over which is known for seafood. We opted for the taxi and definitely didn't regret it.
The one night we spoilt ourselves on grub. Red snapper and lobster from the tank... mmmm.
BEFORE: 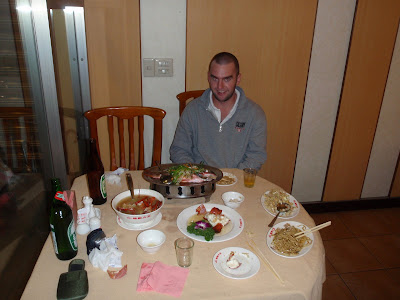 And made every penny count!
AFTER: 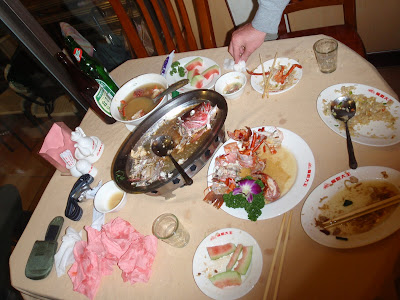