Day Two in Taipei and I already had plans to get outta the city. So I led the crew on an adventure to Pinglin, about an hour outside of of Taipei. And by led, I mean accidentally set my alarm to the wrong time and thus ended up being over an hour late and then waited another hour and a half for the rare city bus that actually goes to Pinglin. 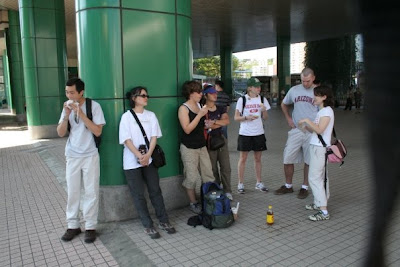 Eventually though, we did make it there and I personally think it was worth the wait. What drew me to Pinglin was the Lonely Planet's description of it:
"Famous nationwide for its locally grown bao chung tea, well loved by day-trippers for its emerald mountain landscape, picture-perfect tea fields, scenic bike paths and clear, swimmable (and kayakable) rivers teeming with fish. The town also features the world's largest tea museum, where you can learn not only how tea is grown and processed, but also how to drink it."
Now, I have a strong aversion to tea (and coffee for that matter) which doesn't fare well in the East, but the description of the scenery totally sold me. 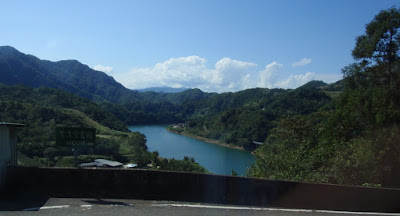 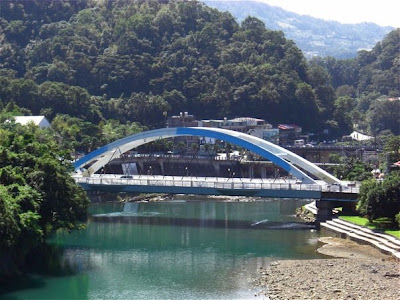 Even though we aimed for an early morning start, by the time we got there it was time for lunch grub. We stopped off at a local camping and rental place where Judith worked her Chinese skills and hooked us up with a delicious noodle lunch. Then the plan was to all rent bikes and hit the paths. 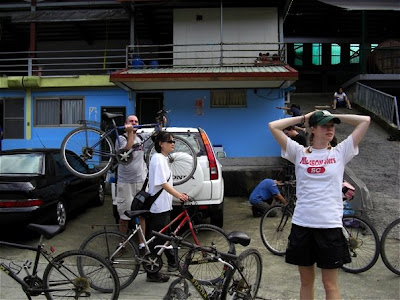 While we were attempting to get all 9 of us fitted on bikes that were at least semi functioning, these kids prepared for a water balloon battle. 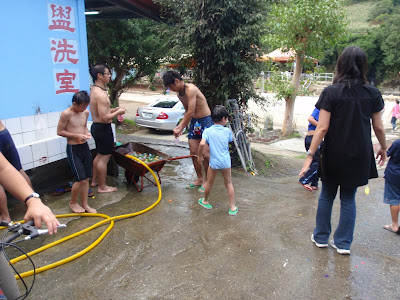 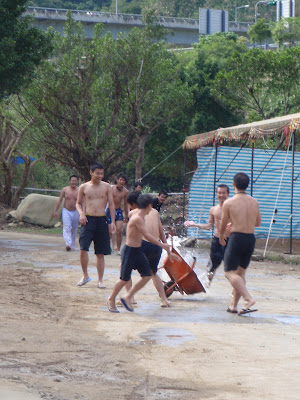 It ended up taking WAY too long, and Alex had a bike with pedals that were even, making it next to impossible to pedal, so unfortunately that's where 9 became 5. 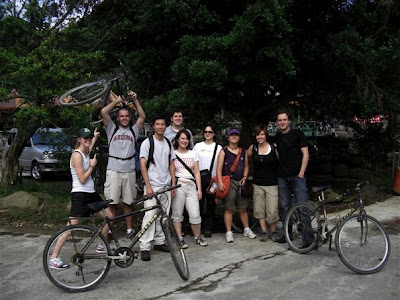 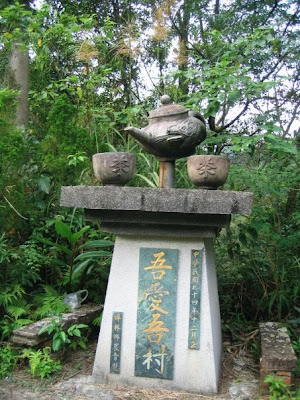 A beautiful graveyard along the path. 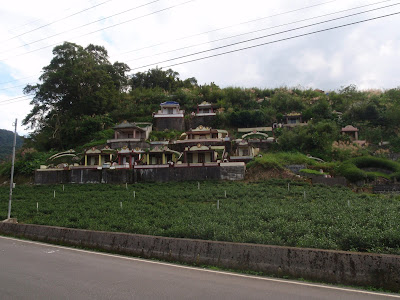 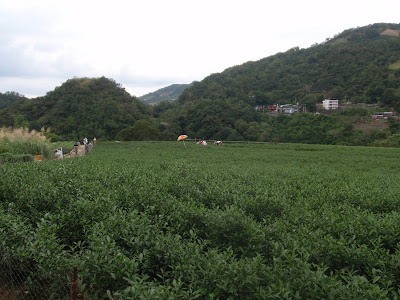 My bike's pedals were even, but that was about the only thing going for it. The chain came off every time I even slightly pedaled uphill. I ended up running alongside the bike half the time. 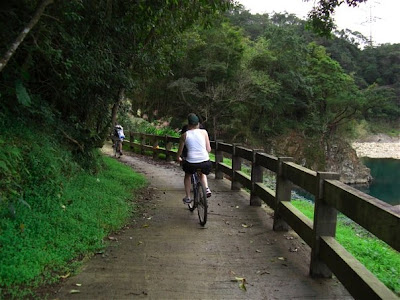 Relaxing by the river trying to spot some of those overpopulated fishies. 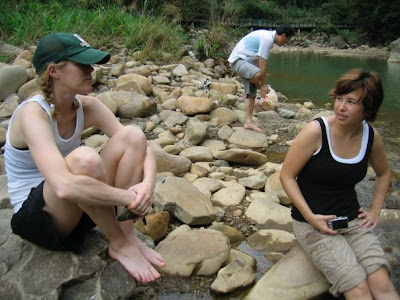 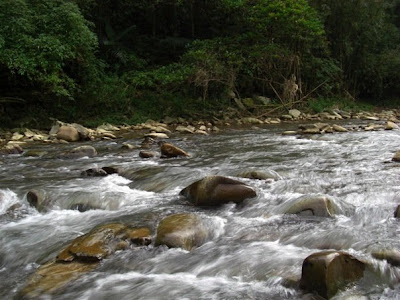 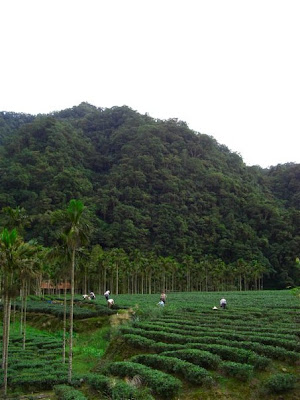 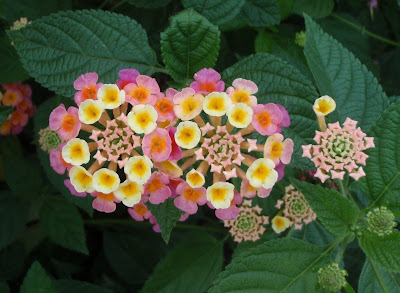 This panoramic turned out kinda weird because of the lighting, but it still gives a good perspective of area.

We made it back! This picture took forever to capture in a timed shot - no help from the stray dog that decided to sniff us all out during the operation. 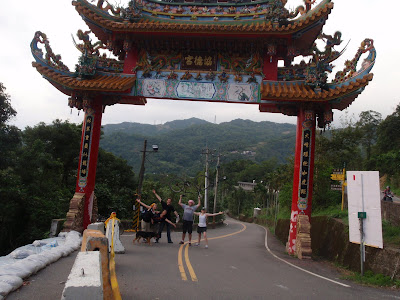 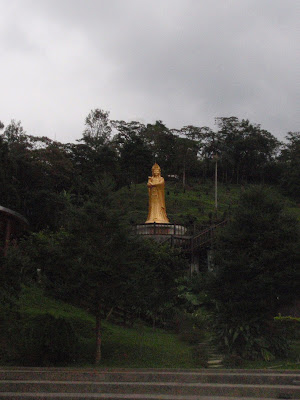 Shot of Pinglin at dusk. 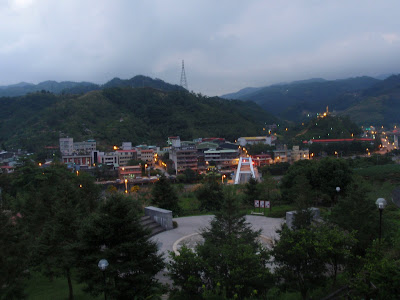 That night for dinner, I was dead set on getting everyone to try a vegetarian buffet I found that had an excellent review. By the time we got back from Pinglin, showered, changed, and got there, they were closed. SO, we decided to do the 'walk around until we find something edible' which proved more difficult than anticipated at 9pm on a Sunday. Eventually, Brooke spotted Modern Toilet and said maybe we could try it for dessert. I suggested we go look immediately. They had dinner AND dessert AND it was an entire restaurant themed on 'the bathroom'. Absolutely GENUIUS idea and I would seriously be interested in investing in said restaurant in the US, no joke.
Haha, everyone but Helen, who was ready to naw her arm off, was so amused with the place. 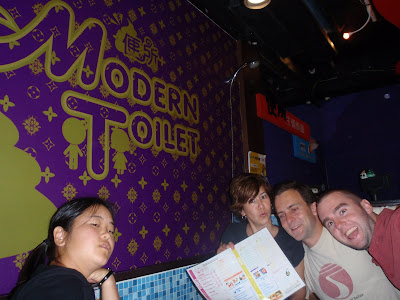 Another adventure ensued upon ordering, as two of the five meals we requested were out of stock. Then, they tried to convince not to each get our own dessert, which we flatly refused because we were ready to clear out the entire place at that point. Eventually, the subsided and the food was prepared.
I got the seafood hot pot on in the blue toilet, and that's Helen's chicken curry to the left. That's right, dinner served in a toilet! 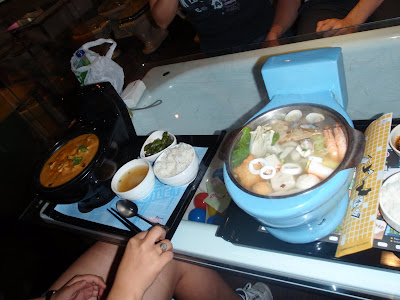 And drinks served in urinals! Genius, I'm telling you, genius! And we're eating on a bathtub, sitting on toilets! Ge-ni-us! 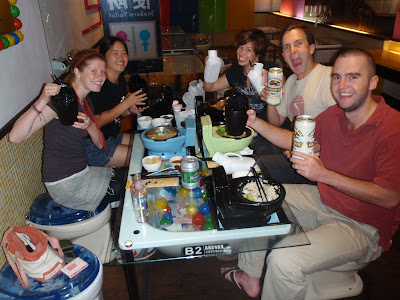 Dinner was pretty good, and very filling, but I was still very excited for my passionfruit, ice cream, shaved ice, chocolate ball, marshmallow, gumdrop, and cookie laden dessert. I guess I kiiinda understood why the three workers were trying to convince us not to EACH get one. 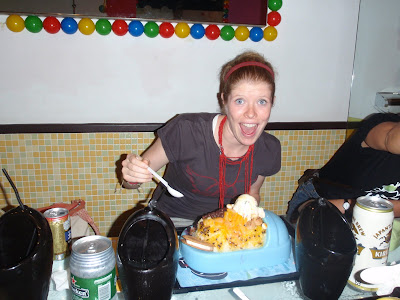 Not one of us could finish. The aftermath: 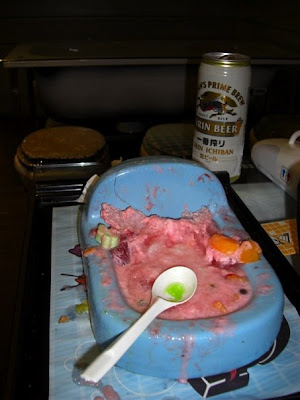