I very rarely travel to same place twice. It's kinda sad, because I think you can develop a greater appreciation for a location and learn and love more elements of it the longer you're there... but, the truth if it is I have a pretty short attention span and constantly need to be stimulated by new surroundings. Japan kind of caters to that desire by having "specialty" sights, foods and events for each town. Being the sucker I am, every time I hear about a new one, I'm like "Whaaaaaat?! A specialty type of mushroom grown ONLY in that region in Japan? And we're not doin' it right unless we eat it at the highest peak of the leech infested mountain? I MUST go!" I also know that I have only 9 more months here and so hailing Horace's advice to "Carpe Diem" is kinda my mantra in life.
That being said, I think it speaks for itself when I say I went back to Hachijo Island for a second go in early August. This time though, I came bearing friends!
I have a (ridiculously long) blog from the first time I went, so if you want to know about the location and more detailed info, check this out:
http://sarahmoersfelder.blogspot.com/2008/10/summer-vacation-on-hachijo-island.html .

This time around it wasn't so hot or humid (which I kind of missed), and a typhoon was basically ensured by the news, my travel agent, and all our co-workers. The day we left had 90% chance of rain; it was blue skies and sunny. We left and returned without a hitch. 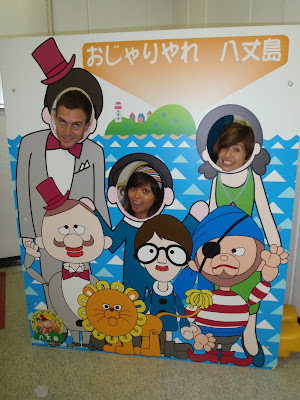 Being the 'expert' that I was from my first trip, I was tour guide for the long weekend. 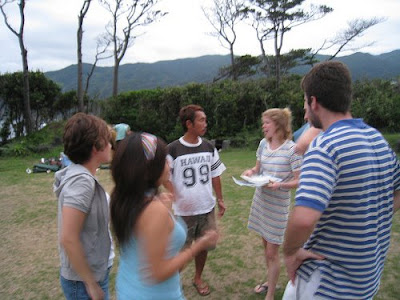 We went back to Otosan's izakaya to eat, drink, and merry. Met heaps of new fun people. 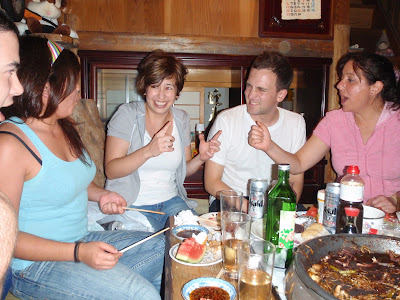 And of course, was reunited with Otosan. 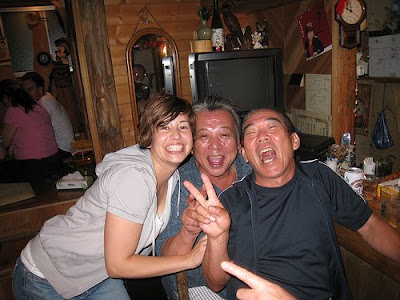 This was our campsite. There was actually a big 'ol rave party going on that entire weekend on the island, but thanks to the typhoon (that didn't affect us at all), the ferries were cancelled and we had the place to ourselves. So lucky. It was incredible! 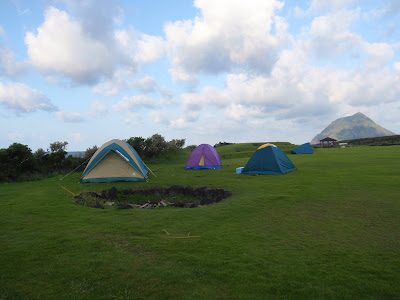 The next day we went beaching. The typhoon left us with some killa waves. 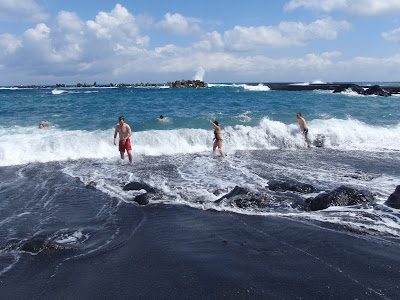 We played and jumped from the pier a lot. Shortly after this shot, Brooke ended up on her bum, uncontrollably bleeding from her elbow. She got an insiders look at the Hachijo emergency room and stitches, too! Lucky. 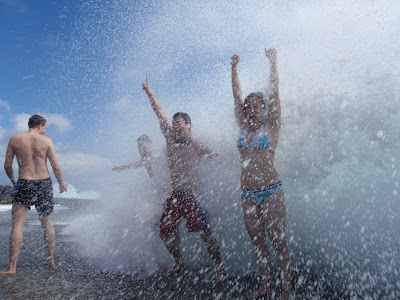 I'd hiked quite a bit the last time I was here, and wanted to take the crew to the top of the highest mountain to walk around the rim of the dormant volcano, Mt. Hachijofuji. Turns out that mountain was overrun by wild goats (no joke), so we couldn't go more than half way up. So, I took 'em to my second favorite hike. We came with six people, and met both of the two ALTs (assistant language teachers) on the island. Proof of how news travels here: "Foreigners on the island, foreigners on the island - all English speakers, UNITE!" Very cool people. 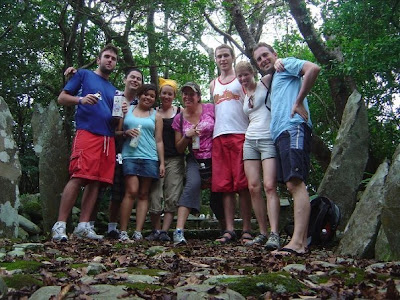 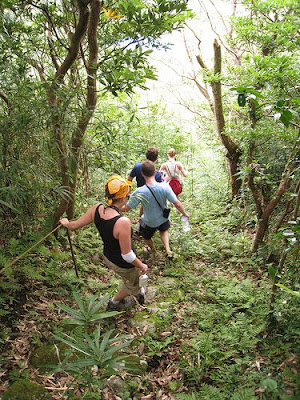 Boys will be boys. They mooned us shortly thereafter, but I wasn't sure that was 'blog appropriate' due to my massive 3-12 year old demographic of readers/lookers. 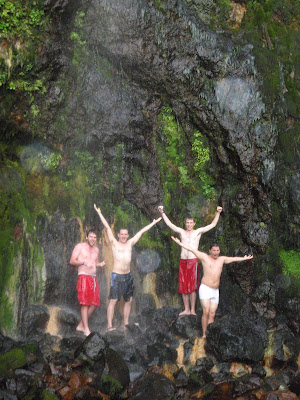 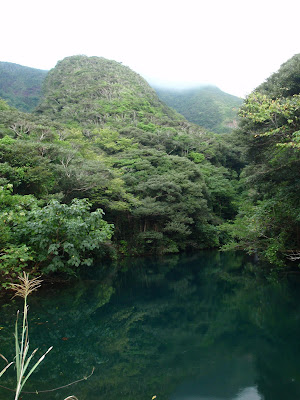 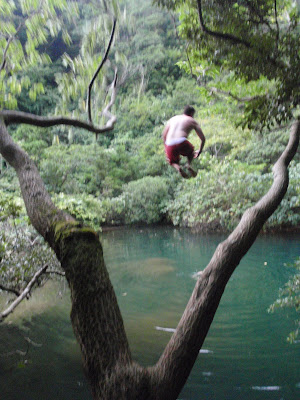 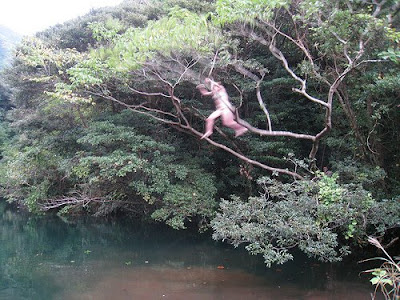 Brooke's Mom sent her S'more's goods this summer, but there's hardly anywhere in Gunma to have a big 'ol bonfire. SO, she hooked us up! Our Japanese reps were... intrigued... by our American tradition. 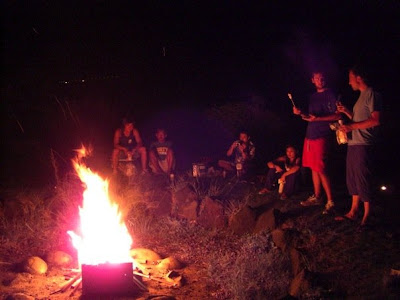 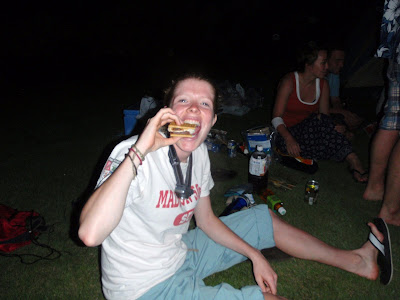 Mischko followed up the S'mores action by sharing part of his culture: German dance. I'm pretty sure he was totally making it up then and there, though. 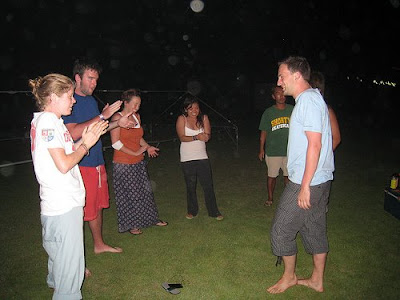 The next day the boys went scuba diving in these unbelievably awesome wetsuits. Not gonna lie, I was pretty jealous and alllllmost willing to pay to go, again. 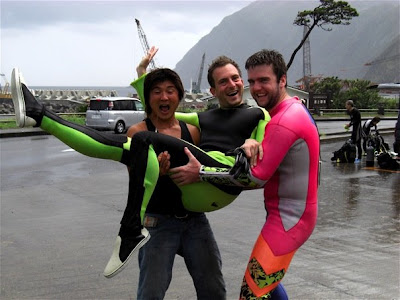 While they scubaed, we beached and took in some of the raving action. Entertaining, I suppose. 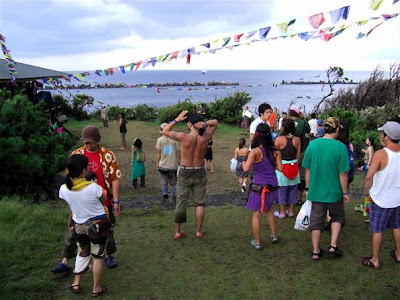 Cutest old man ever! He had made his own diablo and was showing off his skills. 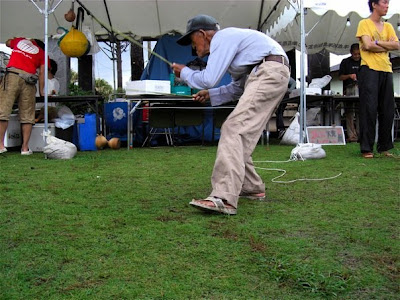 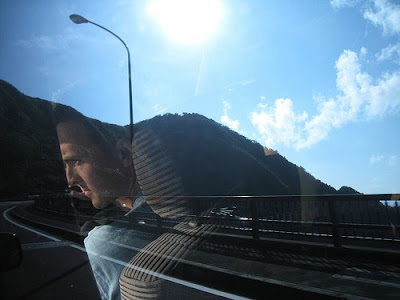 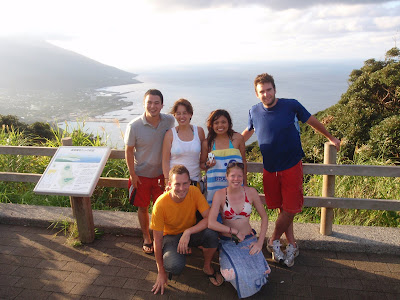 Aloe grows naturally throughout the island so it only made sense to pull over and have a soothing session post beaching. 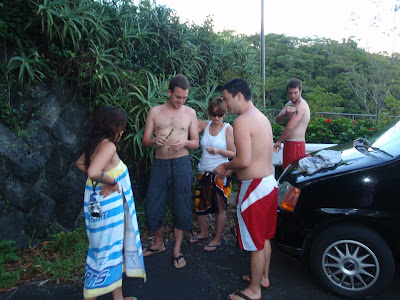 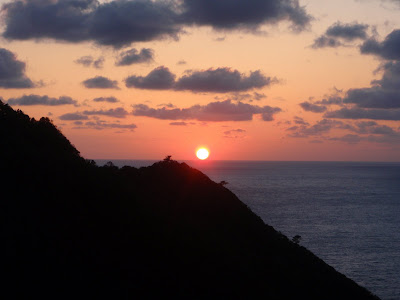 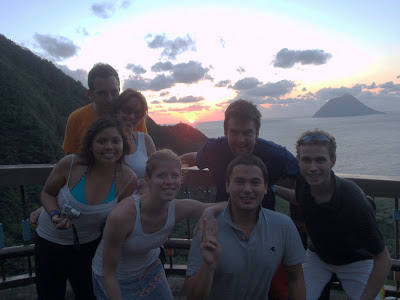 Trying out a different izakaya. Special dessert for the ladies! 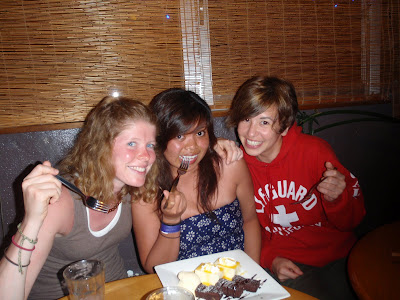 Last day hike for a dip in a teeny waterfall, before... 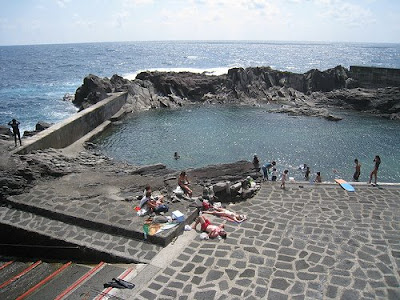 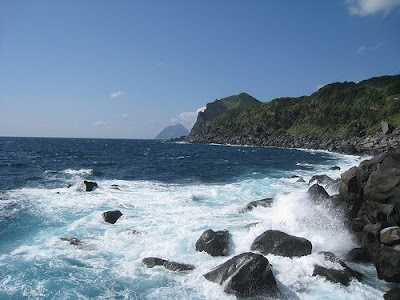 Yeah yeah! This time I actually got to cliff jump. 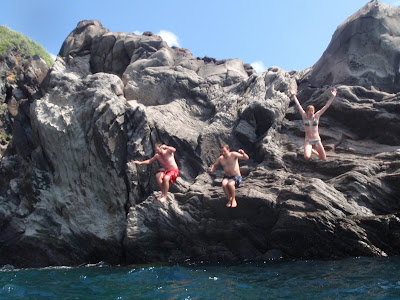 Then we had fun with the underwater camera for ages. 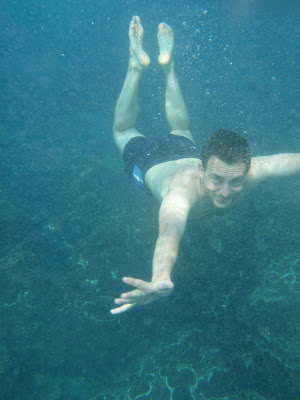 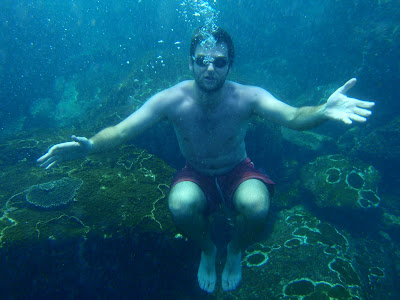 Then we had to leave. It was another amazing trip to Hachijo and I was so happy to have been able to share my first experiences and love for Hachijo. We got soooo lucky with the weather (despite a massive thunderstorm one of the nights soaking a few people in the tents) and have a ton of memories to reminisce on... much to our other friends' who didn't come dismay. Hachijo '08: success!
Posted by Sarah M at 1:26 AM