My 25th birthday was on September 14th. The Japanese knew I don't just like having any ordinary day for my celebration, so they planned ahead and not only made my b-day on a weekend, but a 3-day weekend. Which meeeeeeeans: traveling! So, I planned a weekend in Yamanashi Prefecture to climb Mt. Fuji, celebrate my birth, and go to Japan's "best" amusement park.
Mt. Fuji: Japan's highest mountain at 3776m and a dormant volcano since 1708. A national icon and spiritual and recreational destination for ages. Naturally, I had to hike it.
The official climbing season is only July-August because of the 'mild weather' and tons of tourist buses that run out of the metropolitan cities daily. I hate hiking in massive crowds, which I've actually only had to do a few times in Japan. I've made quite the effort to make sure to go to remote locations or touristy places during non-peak times. There's nothing worse than having to stare at a strangers ass for hours on end while you wait in a line to walk up a hill. Kinda takes the fun out of it. The buddy system is generally a must for hiking, so it's super important to find a buddy with the same pace or one is stuck stopping and starting, stopping and starting. Turns out on Fuji, there was no getting around this... buddy or not. I planned to go a few weeks after the climbing season ended to avoid the crowds, still have good weather, and celebrate my birthday while the sun rises over the highest point in Japan.

I somehow convinced 8 other people to hike with me. Either I did a really good selling the trip, or they reallllllllllly love me! There are four trails up to the summit. We went on the most common and closest route to Gunma: the Kawaguchiko route. It's possible to start from the base... and maybe someday I'll do that, but the more common (and sane) option is start halfway up (at 2000m), at the 5th station. 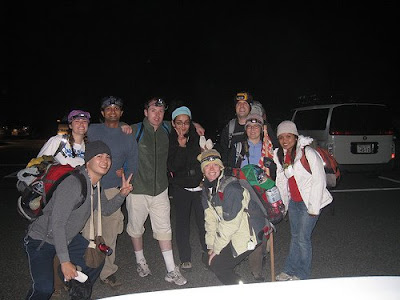 The hike up is estimated to take 5-7 hours, so to see the sunrise we started the hike at about 10:30 at night after carb-loading up on spaghetti. It was almost a full moon that night.
*as per usual, my pictures turned out like poo poo compared to Alex's, so I stole lots of his. More of his pictures can be found here: http://www.photoblog.com/AlexanderLaws/2008/09/13/fuji-san.html . 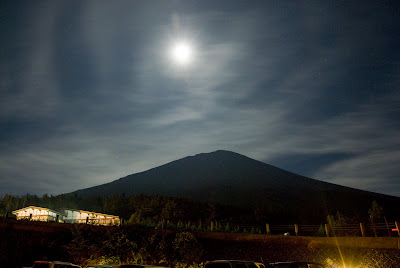 Here is a torii gate you walk through on the hike. 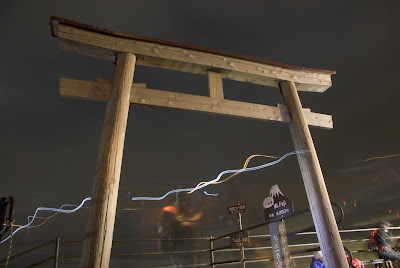 This is a view from up on the mountain looking down at the city below. Those lights are people's headlights as they're coming up. The moon was so bringht and so many people were wearing headlamps that it really wasn't necessary to have one. 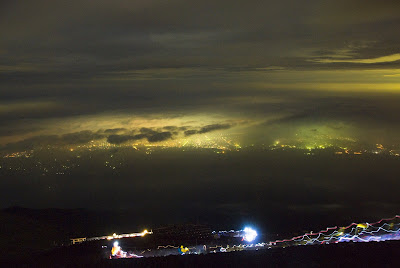 The hike up was pretty boring, actually. It started out kinda tough, as I was trying to figure out a good pace and it was pretty vertical with lots of steps. Eventually the steps ceased to exist and just volcanic rock lined a wide and winding path. Lida and I had a good pace and I didn't feel tired or get any elevation sickness or anything. It was dark though, and not beautiful, essentially the good parts of hiking were lacking. Around the 7th station the crowds started getting closer and closer and we had to do the stopping and starting bit a lot more. That was annoying, but did keep us paced well since we were trailblazin'.
Lida and I stopped at the 8th station to rest for an hour before heading to the peak, since it only gets colder as you get higher up! We were ahead of 'schedule' for seeing the sunrise, so we basically curled into a corner and tried not to get hypothermia. There are huts with food and sleep areas for those who book in advance at each station. The price increases as the altitude increases. Beers were six bucks at the top: the same price as Summerfest or a baseball game!

About six hours after we started the trek, we were finally at the summit. Snow and darkness greeted us. 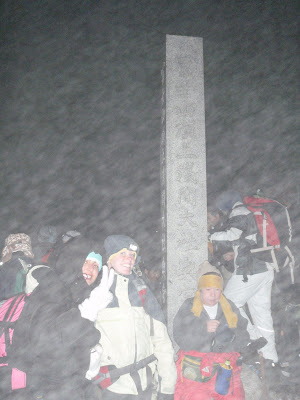 Here's a stupid little video I took in my numbing, lack of sleep delirium once we settled in to wait for the sunrise, at about 5am.


The sunrise was... disappointing. Since I was an obsessive planner and researcher for this thing, I had seen heaps and heaps of amazing sunrise pictures. What we got was literally a 2 second tease of the suns outermost rays peaking out. Lida and I sat around for another 30-ish minutes trying to coax the clouds away, but it was no luck. Alex did a nice job of getting the 2 second peep show, though. 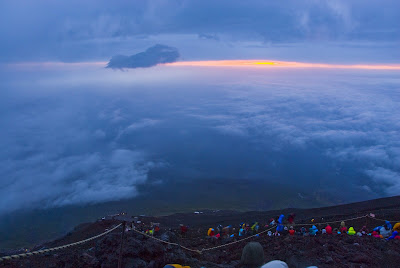 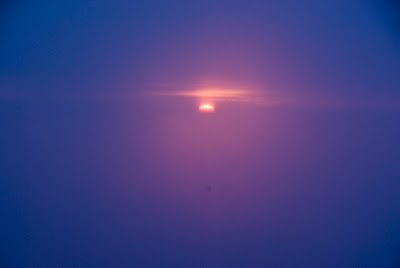 Then, we had to begin the descent back down. I was planning on doing the loop around the crater before going back down, but with the fog and clouds, there was no visual evidence we had even reached the peak. No sunrise... no crater... no bathroom. I was struggling.
The hike down began, with several food stops along the way. 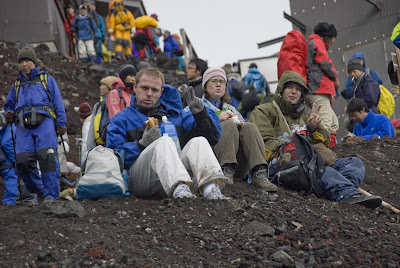 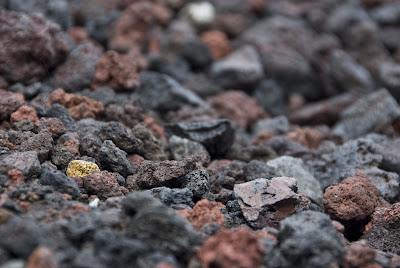 It eventually cleared up a bit, and the views of the surrounding mountains were pretty amazing. 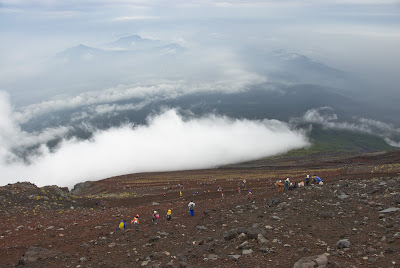 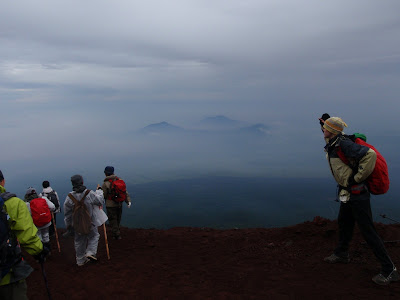 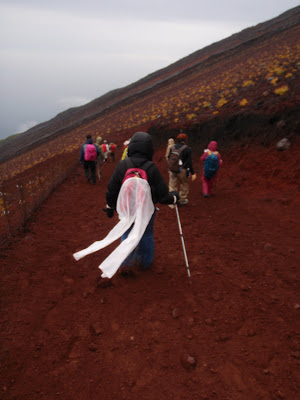 Alekh and Erin were the first ones up to the summit, but Lida and I were the first ones down. We couldn't find out how this was possible, as we never remembered passing them and they were a good hour or so up on us. Turns out they accidentally took the wrong path down! They had to take a series of 3 buses to meet us back in the parking area! That gave us an extra four hours or so to hang out in our deliriousness... and of course have ice cream! 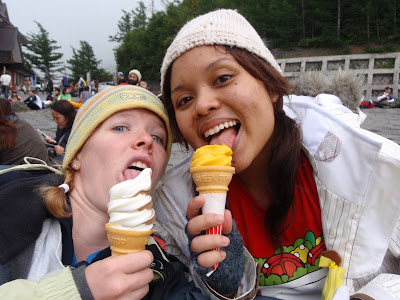 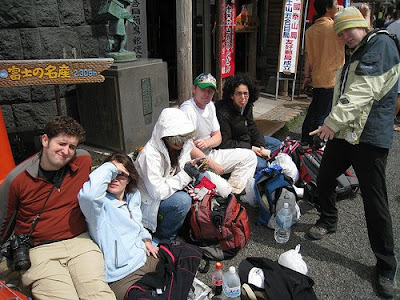 There were some Phillipino guys that stopped to chat for awhile. Like so many a dark skinned peoples in the past, we played the 'look at how white Sarah is' game. 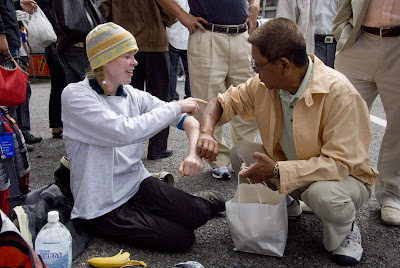 Then they gave us bananas. And, I got a picture with them, and the guy next to me (the one sticking out his tongue) totally copped a feel of bum. I couldn't figure out why they had a bag of bananas handing them out to random foreigners, but I'm pretty sure that was his plan from the start: a banana occupies one hand, leaving the suspect unable to defend themself. Tricky Phillipinos! 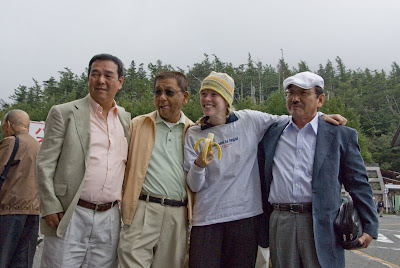 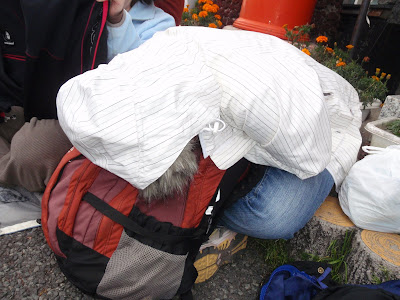 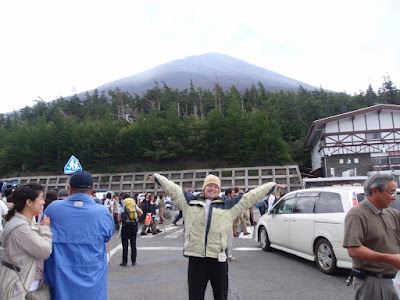