I just want to bang on me drum all day

I've been practicing karate for the past year. I absolutely loved my karate-sensei (teacher) and the other old guys (from mid 40's to mid 60's) in my class. They had hearts of gold and were a pleasure to be around. I have learned a lot and enjoyed it, but it's definitely time for a change. I think I gave the patience thing a good run for the past year and can most definitely appreciate the skill and technique of karate and other martial arts; but, it's not for me. Three plus hours of stretching and striking techniques... well, my mind wandered a lot during those practices.
SO, I've been looking into new fun activities. I've been attempting a few new classes at my gym. The one that's been the most fun is an LA hip-hop class. Despite the 50 year old ripped woman that can pop it and lock it better than I EVER will, it's pretty cool. I am generally confused the entire time, but when a short routine comes together in the final minutes, it looks and feels really cool.
I also went to a local group's taiko class earlier in the month. Taiko is the name for a Japanese drum. The size, shape, and designs on a taiko vary between regions, but the basic percussion style and form is very similar. And, as I found out, very precise. Anyway, they were kind enough to let us watch them practice and even hop in on the drums for awhile. The beats, rhythms and motions are so... catchy! You just feel it in your whole body. Even though I felt it while watching the masters drum away, I'm pretty sure what was going on in my head did not translate to what was going on with my hands. I sounded and looked pretty awful, but it was fun. Think I can become a taiko master within the next 9 months? 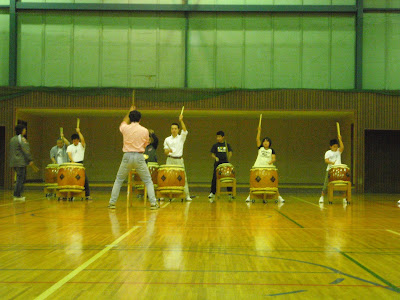 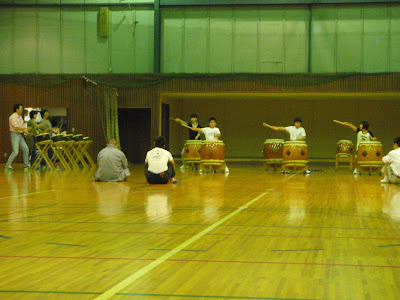 Me, Dean, and Dario. 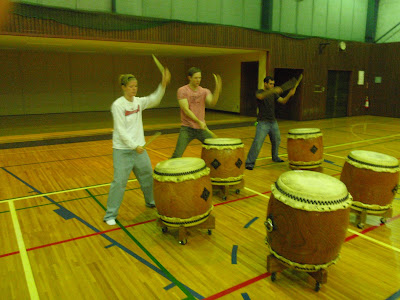